Kichwa Timbo - The Safari for Foodies in the Masai Mara

What is it about safaris that makes us wonderstruck? Whether it’s the first or fourth time, there is something ceaselessly compelling about the Masai Mara. The timeless terrain, unadulterated landscapes, sense of space and tremendously kind people are all certainly factors which contribute. And then there are the animals; the one’s you're sure you need to be called Sir David  to be this close to.

On this safari, as glad as I am I was able to glimpse them, the encounter with the most wild kind of animals were almost an incidental; like icing on a cake. A cake that was made up of meticulous attention to detail, a ‘tent’ that was bigger than my apartment in Hong Kong and no less luxurious, and literal cake. Other foods too, but the orange and almond cake was particularly good. It’s the food at Kichwa Tembo, one of the properties of prolific adventure accommodation company AndBeyond, that deserves particular attention. 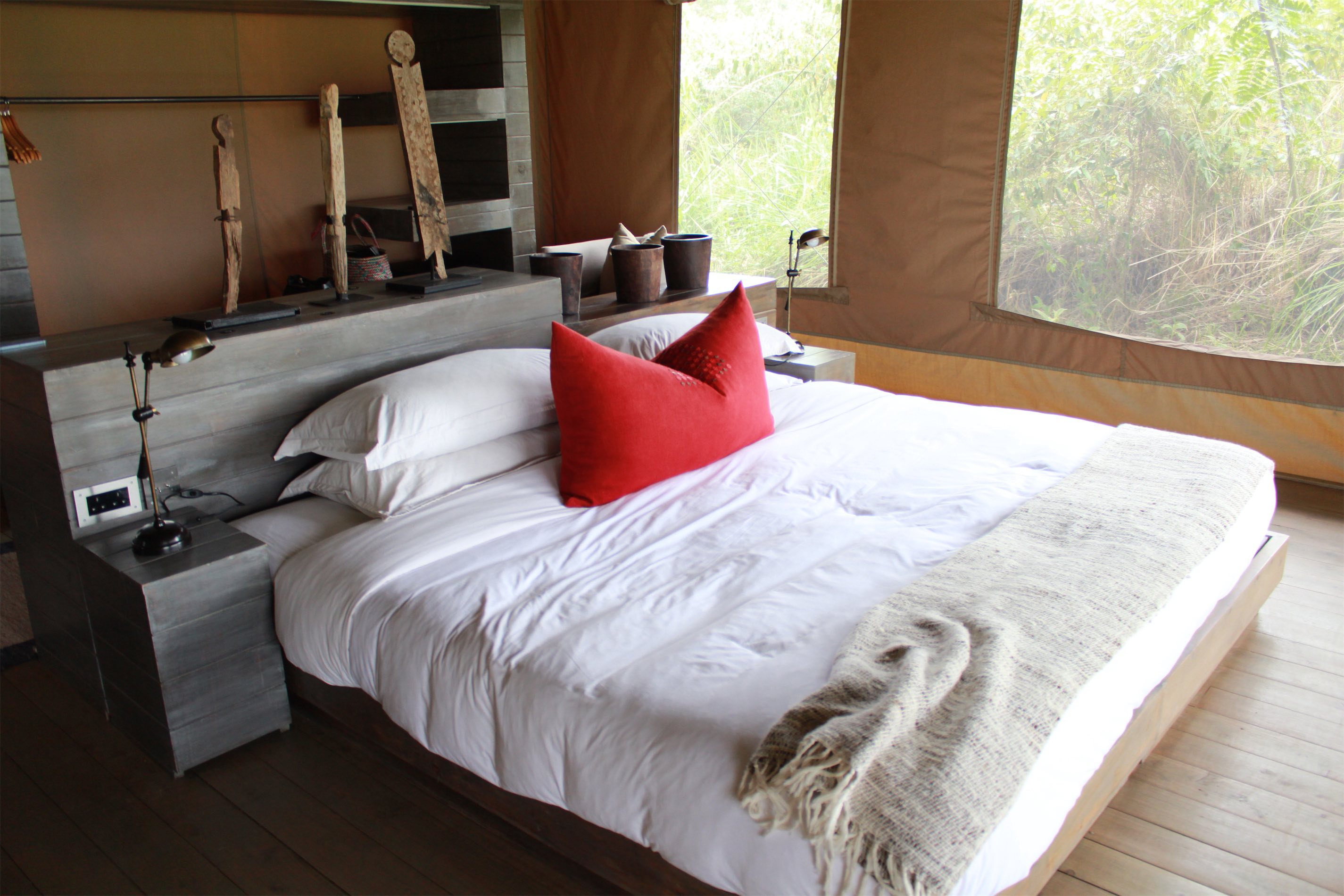 Glamping at its best at Kichwa Tembo

When Chef George first began at Kichwa in November 1995, most of the ingredients were brought in from Kenya to feed the 80 guests the camp is able to host. While there are still many ingredients coming in from the capital city–about which no one is complaining as the soil is incredibly fertile throughout all of Kenya and consequently the yield particularly tasty–Chef George has been able to establish three small gardens dotted around the property affording the kitchens up to 200kg of produce per week. 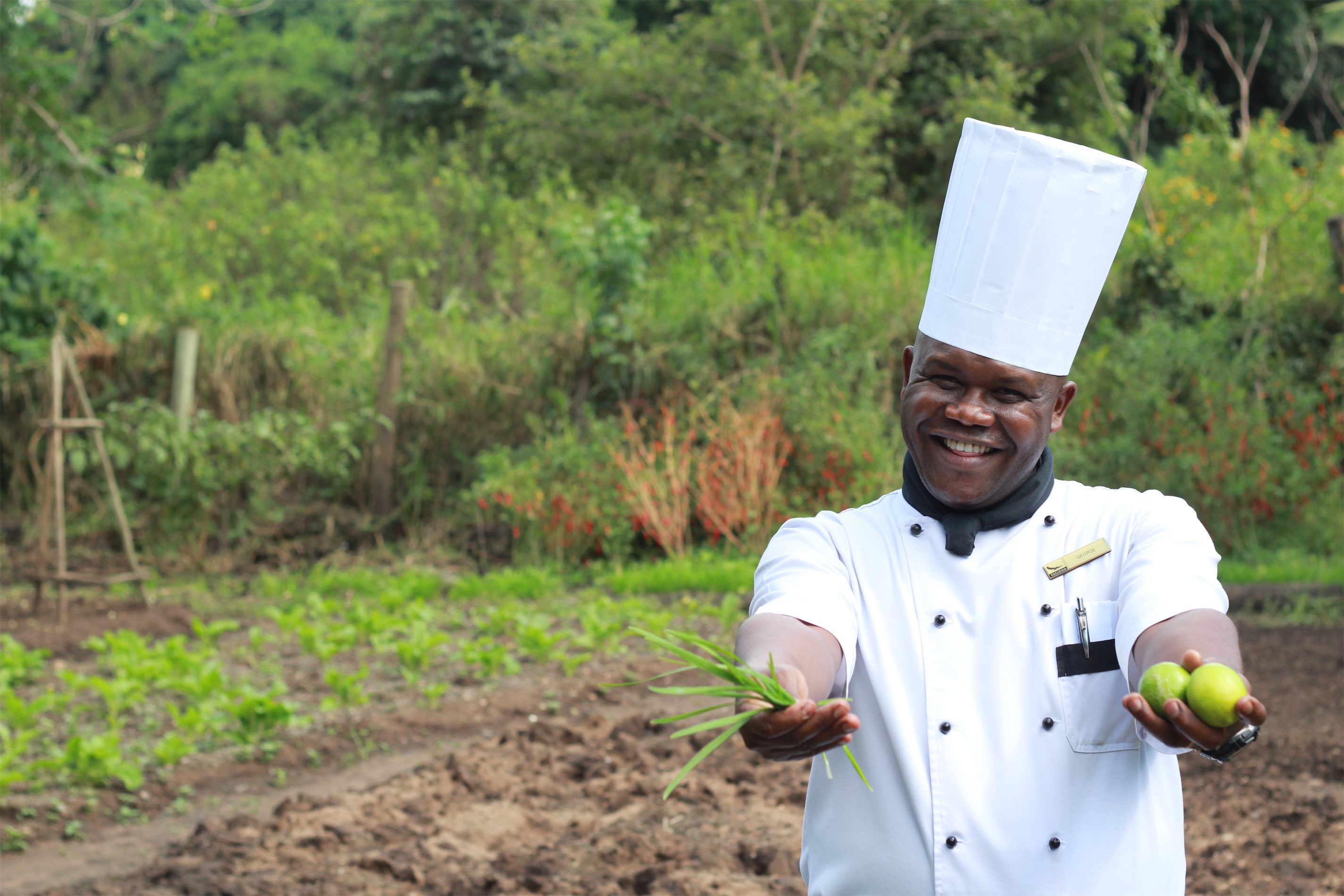 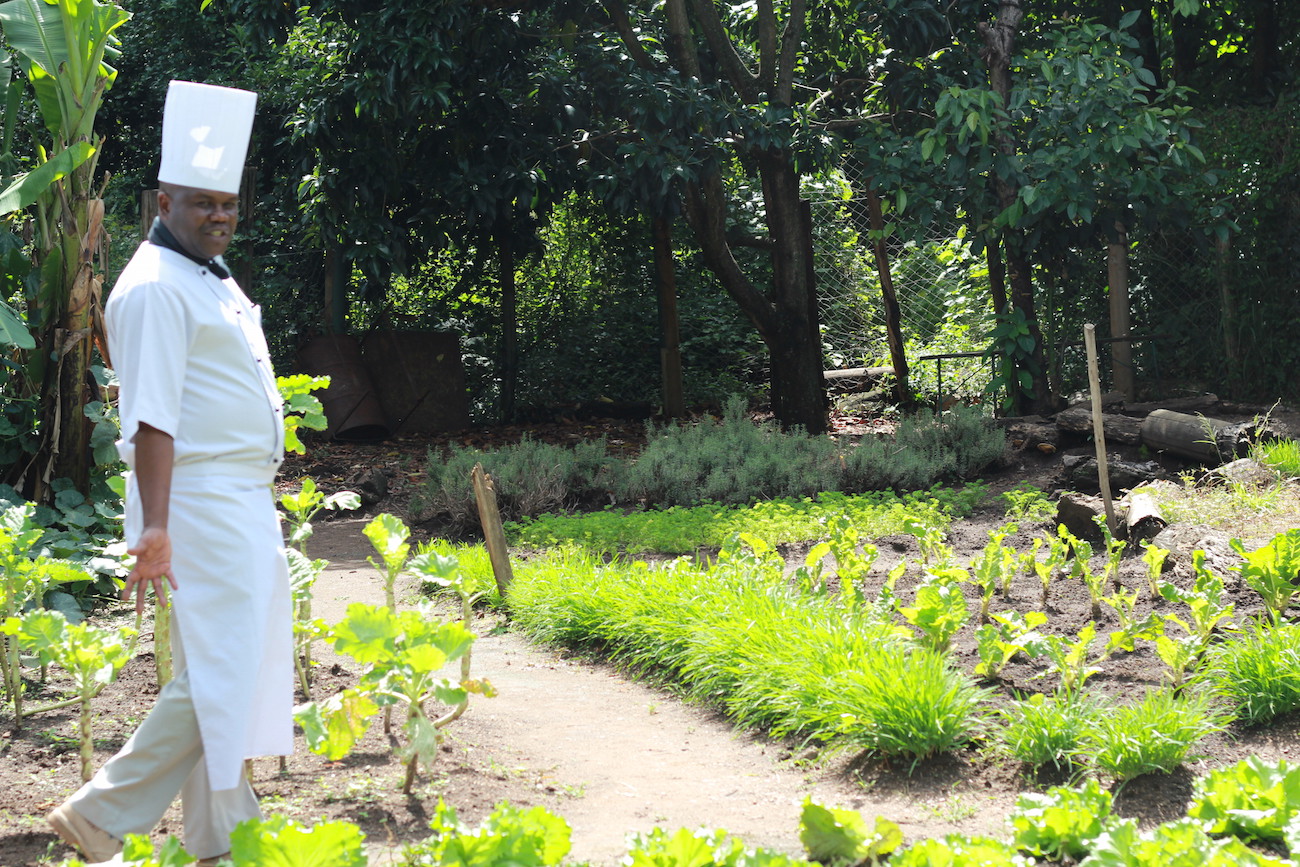 In addition Chef George has been able to visit neighbouring Masai villages, of which are pointedly traditional,  and impart agricultural knowledge. Growing up on a farm himself, George worked his way through the ranks  and eventually trained at Utalii College in Kenya, where he graduated at the top of his class. When the time to run the kitchen at Kichwa Tembo, Chef George was adamant about growing the vegetables that would facilitate feeding the guests as well as inspiring local communities to do the same. He achieved this both in Kiwcha Tembo camp as well as in the local village which is close by. He was particularly proud of this achievement. 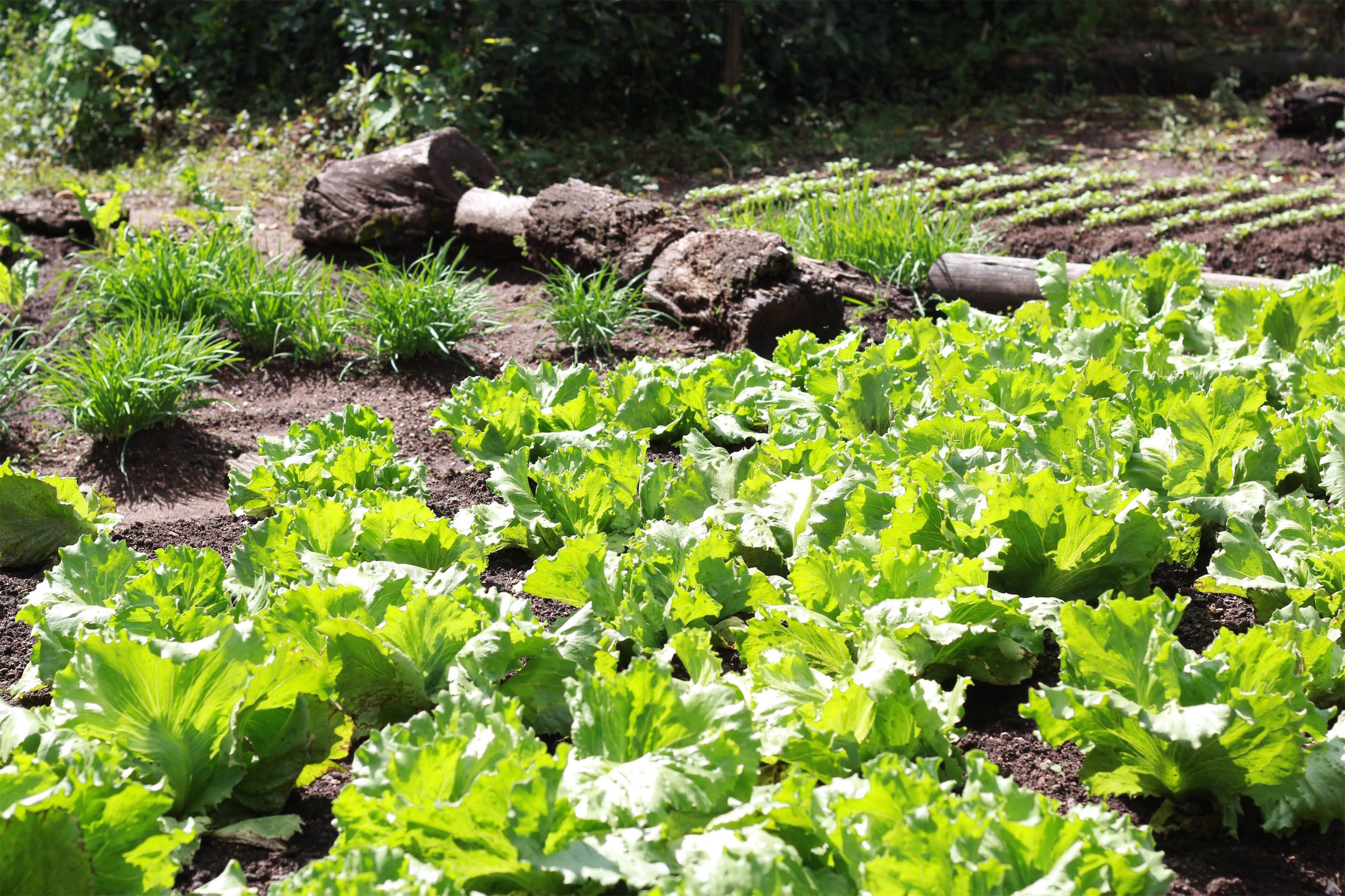 The gardens at Kichwa Tembo

“We went into the villages and asked if they would like to be taught about these practises. After a little bit of convincing, they quickly took to tending relatively straightforward crops like carrots and potatoes. It was a good move, I think, because they had mainly been drinking milk and cow’s blood. Maybe some goat they would kill every now and then. It’s nutritious, but it doesn’t taste very good.”

Traditional Masai tribes tend to subsist on a diet of raw cow's blood, mixed sometimes with raw milk, in addition to the domestic animals reared and then slaughtered on irregular intervals. Carrots, beets and kale seem a very healthy and tasty addition to the diet, and the people have taken very rapidly and happily to the introduction. George was even able to train one of the younger villagers, Joseph, who now is the full time gardener at Kichwa Tembo. And upon meeting Joseph, it couldn’t be more clear of his pride in holding this title. Joseph, who tends the gardens at Kichwa Tembo, is from a neighbouring Masai village

Chef George puts these ingredients to delicious use, especially evident in the salad bar, which is present at the lunch and dinner buffet in the camp. Salad are so fresh they need little more than a dash of extra virgin olive oil and sea salt. Alongside the main, varying from anything to a Moroccan tagine to a medley of skewers cooked ‘brai’ style with Kenyan beef, it’s hard not to eat like a lion at every meal time. 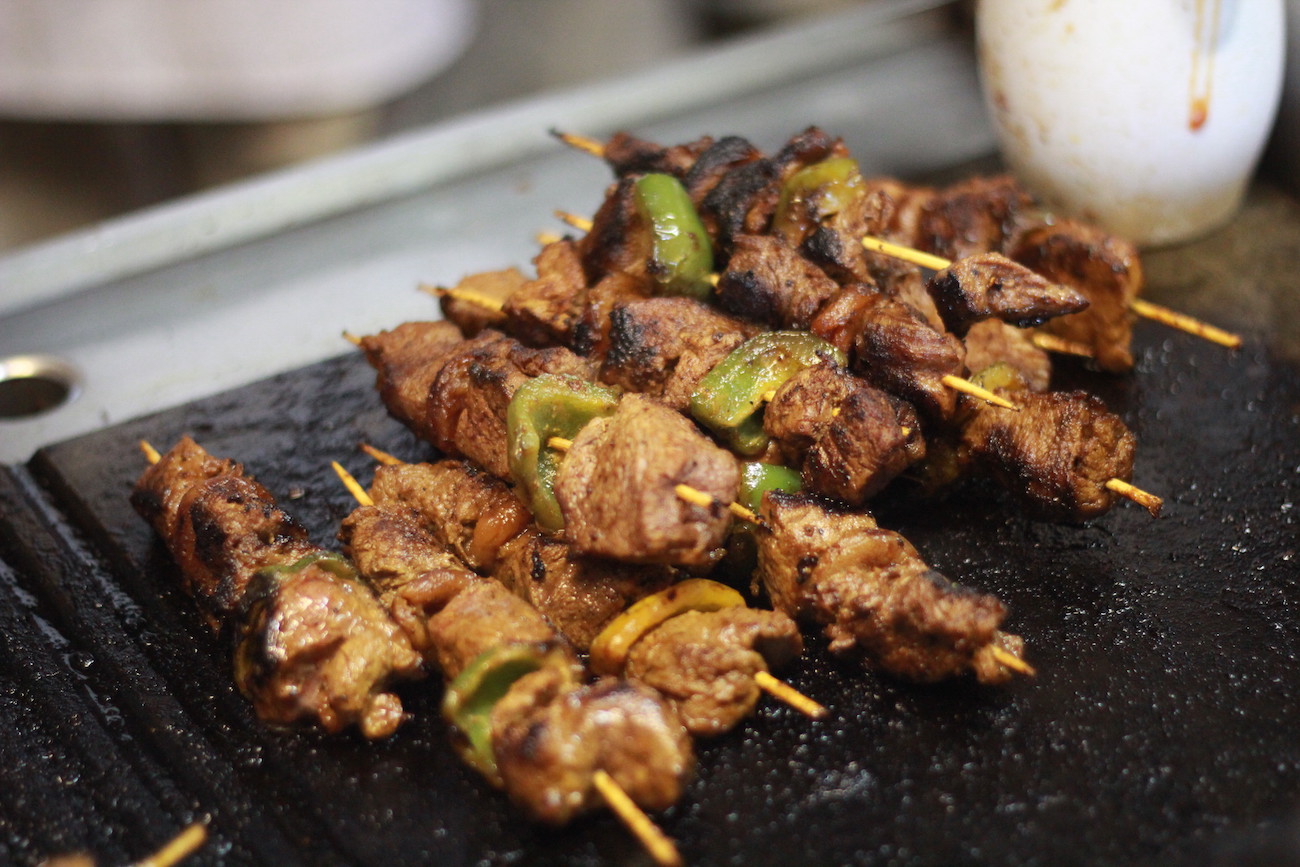 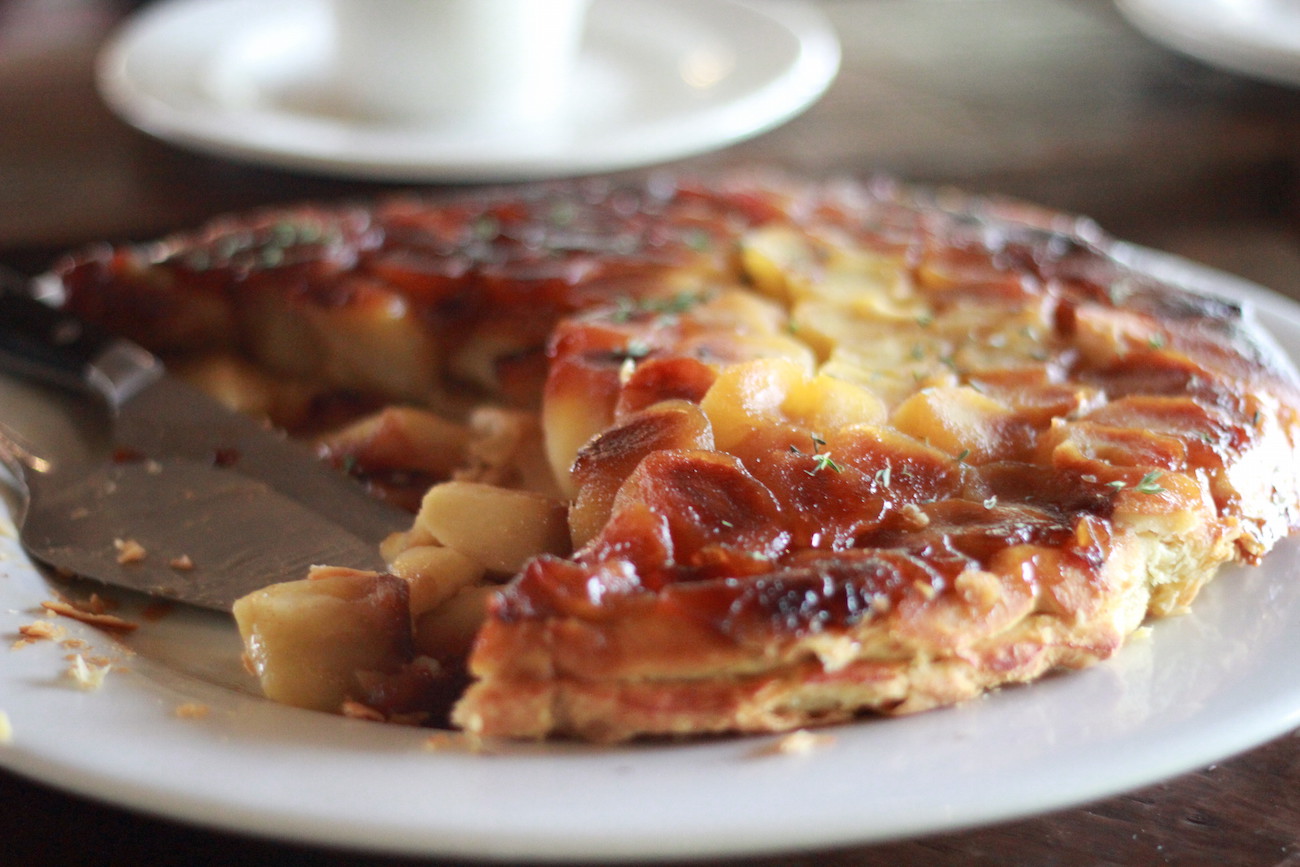 The temptation to avoid gluttony while watching African animals intermingle is made even more difficult by the quality of food that makes its way out on safari alongside guests. If your guide is anything like Felix, the first-rate ranger who ensured premium rhino sightings while I stayed, there will be freshly baked cookies, beers, coffee, vegetarian quiches and donuts available for breakfast and sunset safaris. Set up by the guides (who seemingly are able to be at any given time equal parts maitre de, tracker, four-wheel-drivers and biologists), sumptuous little feasts are to be enjoyed as you watch the sunrise, set and amid a herd of anything from antelope, meerkats, warthog or giraffe. Breakfast spread in the middle of the Masai Mara 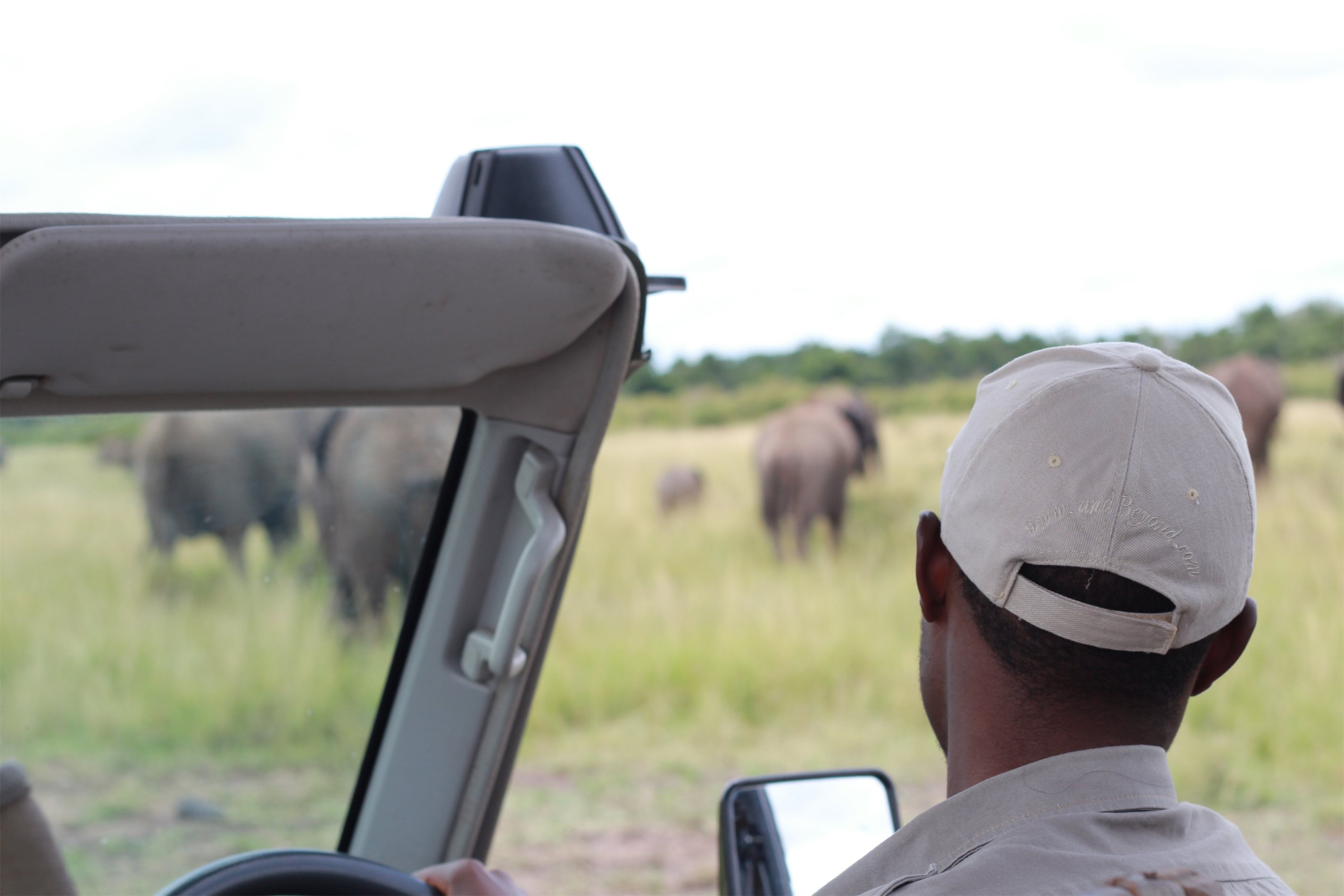 Whether it’s the freshly brewed tea that accompanies a 6am wake up call (discreetly deposited through a letterbox type format into the glamping tent no less), or the South African wine that is served pre or post dinner in the viewing lounge that overlooks the plains of the Masai Mara, Kichwa Tembo manages to entwine everything in an adventuring food lovers’ dream. 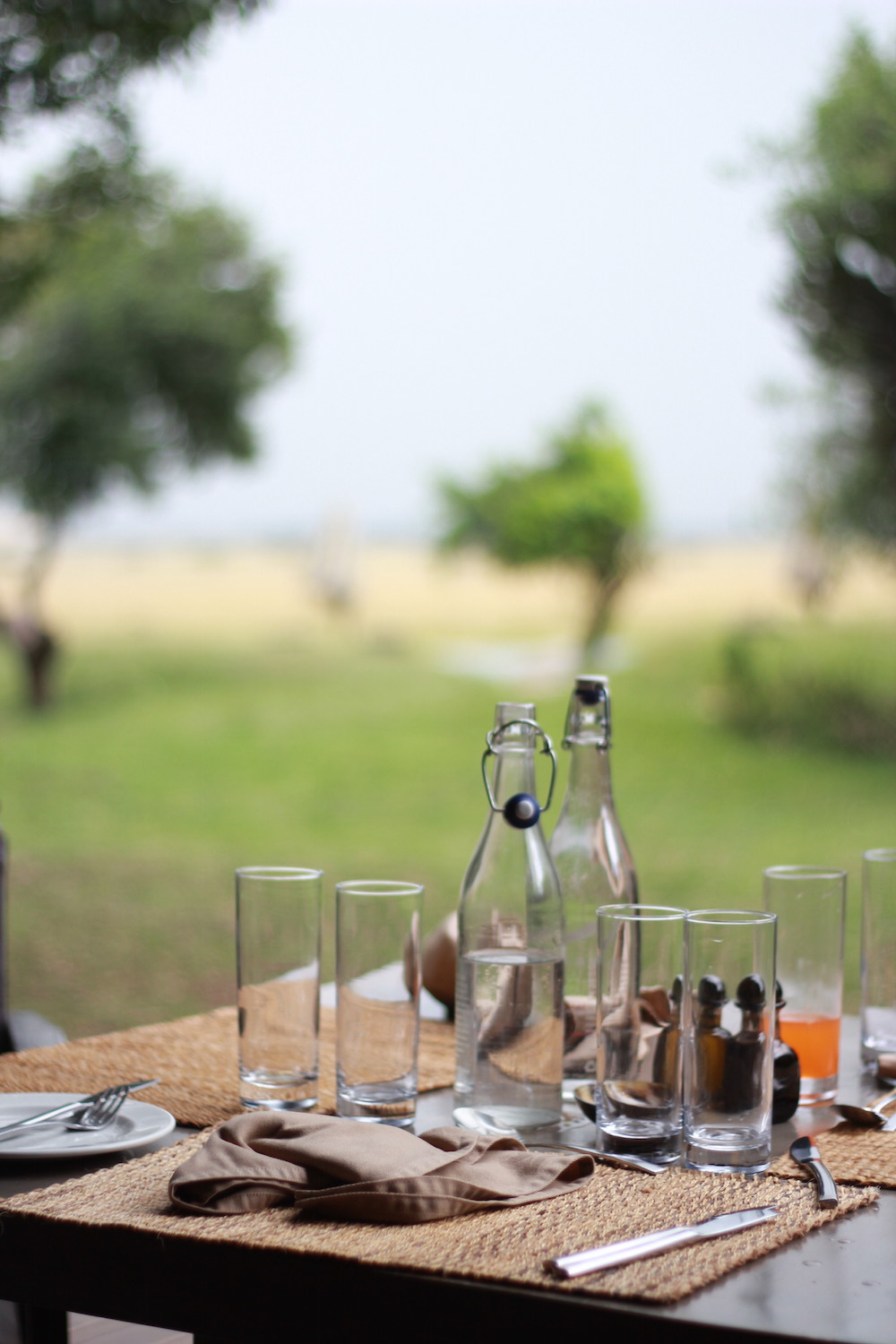 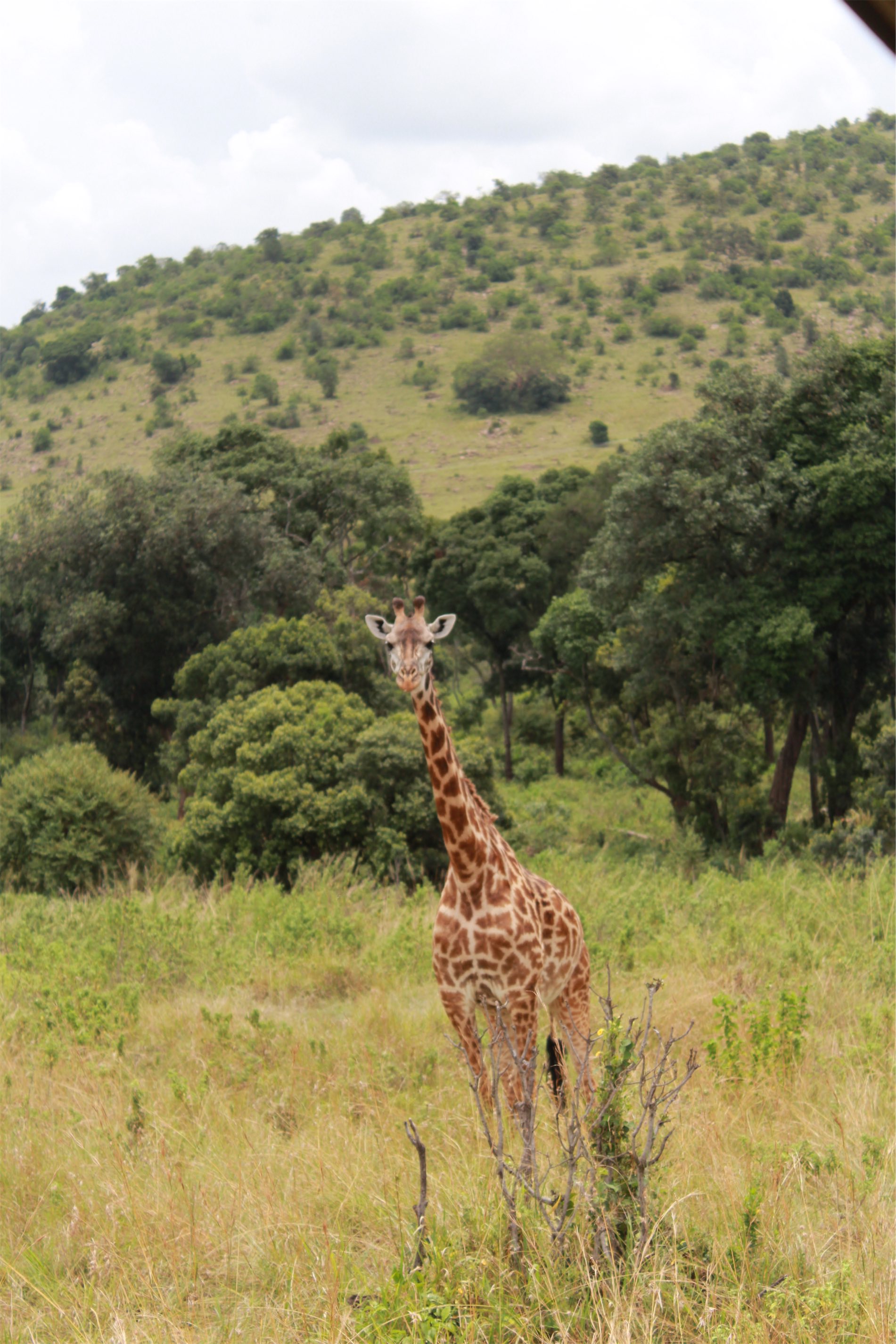 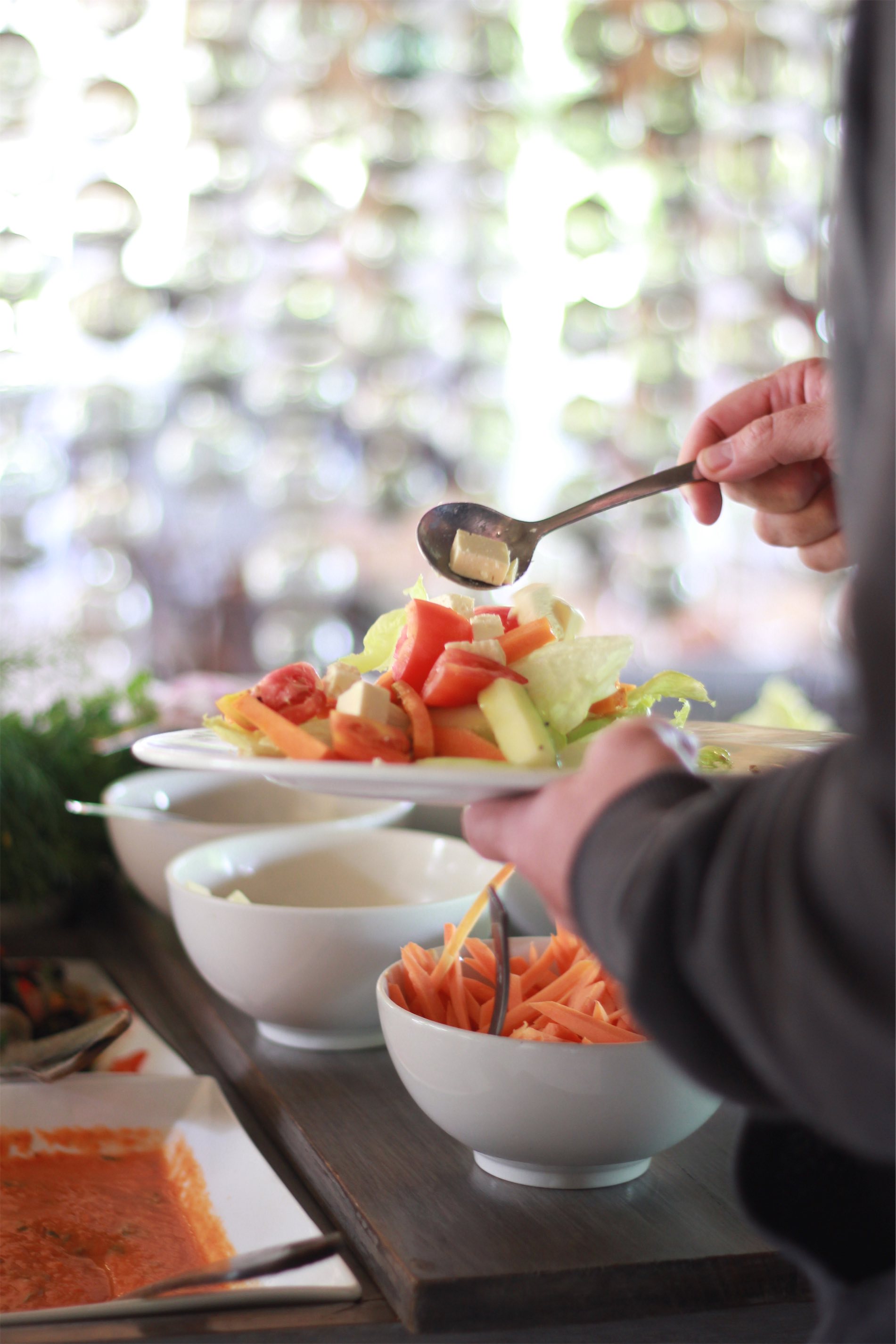