Burger Circus has milkshakes that brings the boys to Hollywood Road

We’ve been having so many different burgers around town recently, I can no longer tell which burger belongs to which restaurant! However, what distinguishes Burger Circus from others might be the whole quirky 1950’s vibe that the restaurant emanates. With cute drawings of circus pinup girls, little antique lamps, and the classic red cherry on all of the milkshakes, I instantly fell in love with the vintage vibe. 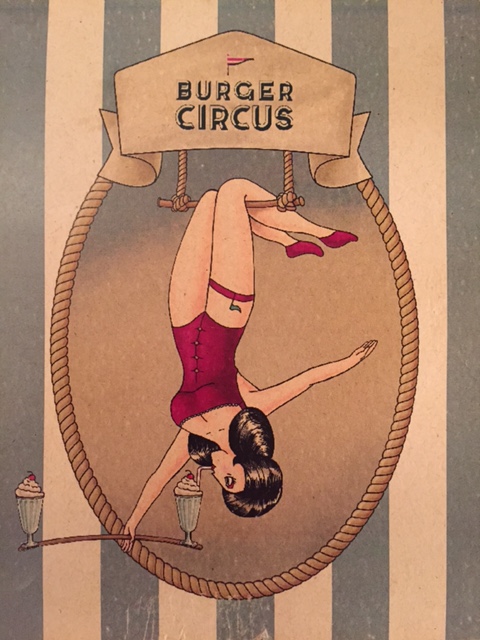 The petite little restaurant mimics a circus van (or train as Mr. A argues); the driver’s seat is used as the bar, the windows were replaced by worn down mirrors to help visually expand the space and the door was always kept open where the traffic sounds outside (unintentionally?) add to the setting. Arriving at 3 in the afternoon, there was not much of a wait, so upon sitting we ordered The American Acrobat, The Circus Burger, Circus Fries and a chocolate milkshake to share. The food arrived promptly in a cute little tray lined with the signature green and white stripes. I was initially disappointed to realise that I only had ONE piece of bacon to go with my burger, but taking that bite into my.. oh my.. the juiciness of the burger oh-oh-overcompensated the lack of bacon in my burger. No wonder the burger comes in a little cardboard box – it’s literally used to hold in the juices! As if devouring that burger did not make me feel guilty enough, I literally sipped away the whole of (what was originally) Mr. A’s milkshake. I’m not usually a milkshake drinker, so boys don’t show up in my yard, but hey hey hey, this milkshake got me fantasizing alright!

However, I was not too impressed with the fries, I was expecting crispy fries accompanied with their circus sauce on the side for my enjoyment. What I was presented with was a tray of soggy fries that was overloaded with circus sauce. The taste itself was not bad, but I would ask for the sauce to be served separately next time. Nevertheless, this new concept has attracted a horde of new customers, and rightly so. But, I’ll selfishly keep the milkshakes (and the boys), thanks. 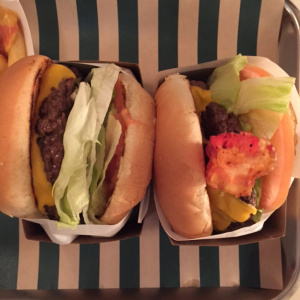 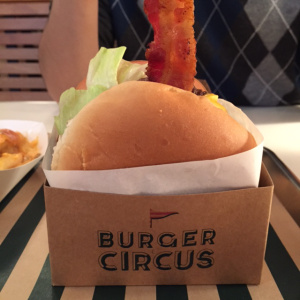 Burger Circus offers a variety of burgers, milkshakes and sides. Meals typically cost around HK $150 per head. Although I cannot say they serve the best burger in town, if juicy patties are what you’re looking for, this is the place to visit (no-nos for first dates you’re trying to impress though). If you’re like us, on the 852 burger journey, pay a visit, order a milkshake and then go for a jog or sit satisfied with a smug smile for another hour or so. Located on Hollywood Road, it is an easy find with its neon lights flashing BURGER CIRCUS. Don’t go in during peak hours or expect to queue for half an hour or more, unless you have extra time on your hands.

The couples food guide - food is the one and only answer to all our love bugs ;)