We were recently invited to participate in a paella cooking course at Zafran with their new head chef, Pere Moreno. As a person who enjoys eating, it's a treat to be able to sit down with a trained chef to hear and see first-hand how things get prepared (and so we can figure out how to do it at home ourselves!).

Chef Moreno hails from north-eastern Spain, from a town called Sant Boi de Llobregat, and trained at Espaisucre, a renowned cooking school in Barcelona started by Jordi Burtón, a true innovator in the world of pastry. He began his career at Saüc (one Michelin star) and Circulo Ecuestre, before moving on to Àpat, as well as the QGAT restaurant of the acclaimed QGAT hotel in neighbouring Sant Cugat del Vallés, both famous for their innovative tapas cuisine. 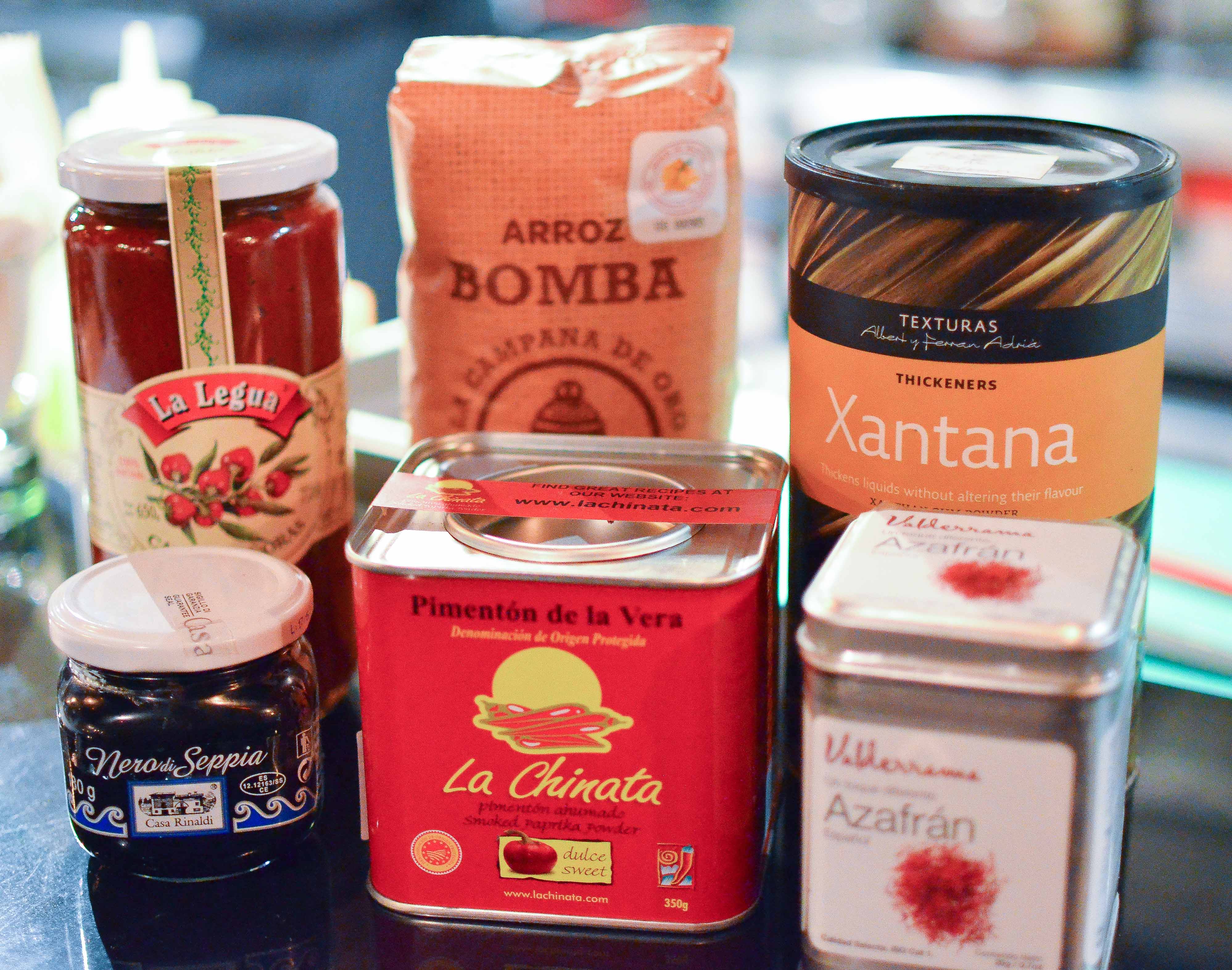 All the necessary ingredients for a black paella

We arrived and the chef gave us a warm welcome (through a translator, as he's still becoming familiar with English), and we jumped right in. We were informed that we were going to be making black paella, Bomba squid-ink rice with baby squid, saffron and aioli. 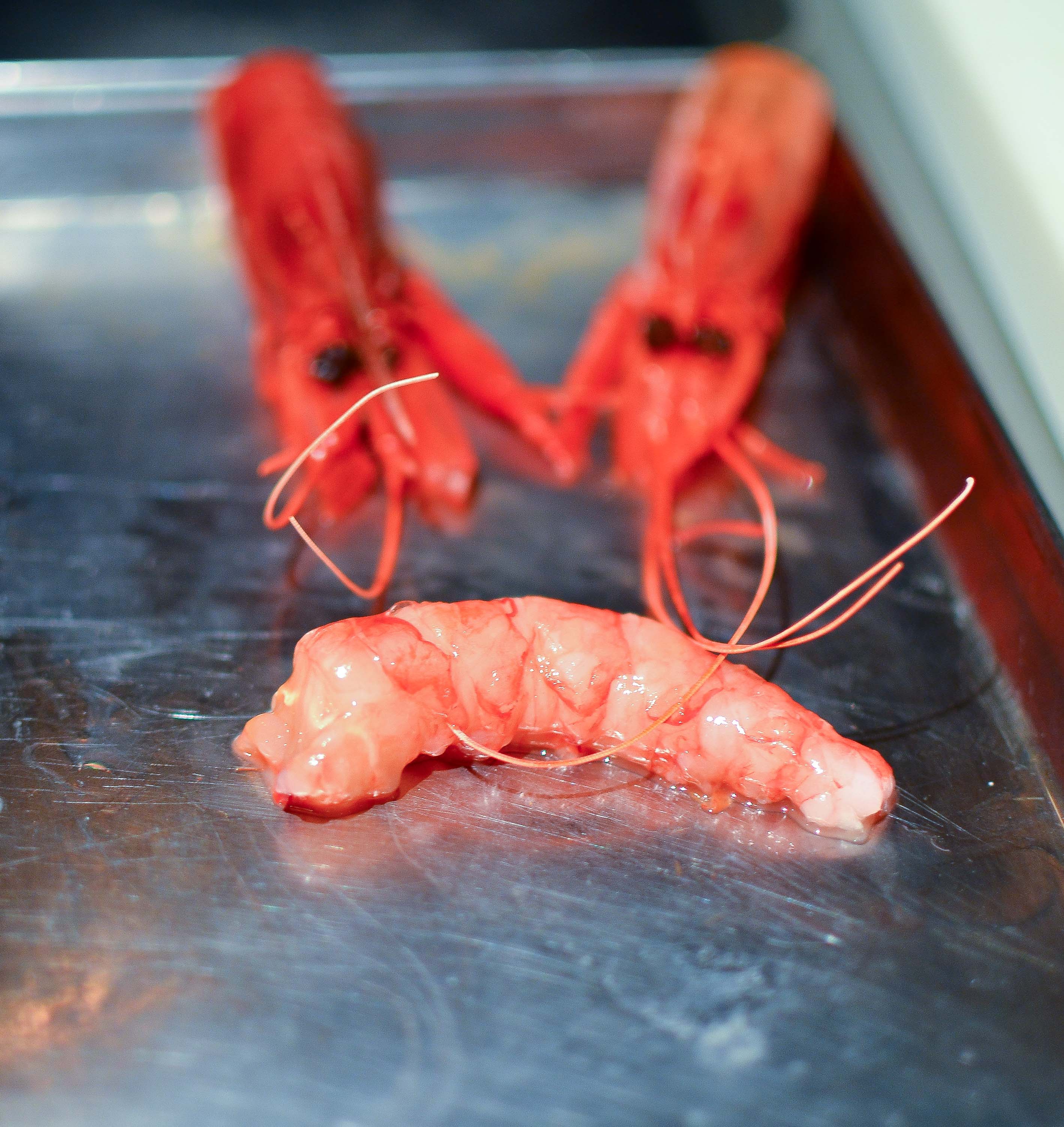 After deveining some shrimp and learning to chop vegetables in the brunoise method, we watched Chef Moreno assemble and create this beautiful rice dish. As the rice sizzled in the paella pan, he noted that it was important not to disturb the rice once it had set in the pan, as the socarrat (the crispy rice around the edges) would not form properly. One of the secrets of this paella is to create a stock from the shrimp heads in order to form the foundation for all the flavours to be drawn into the rice. 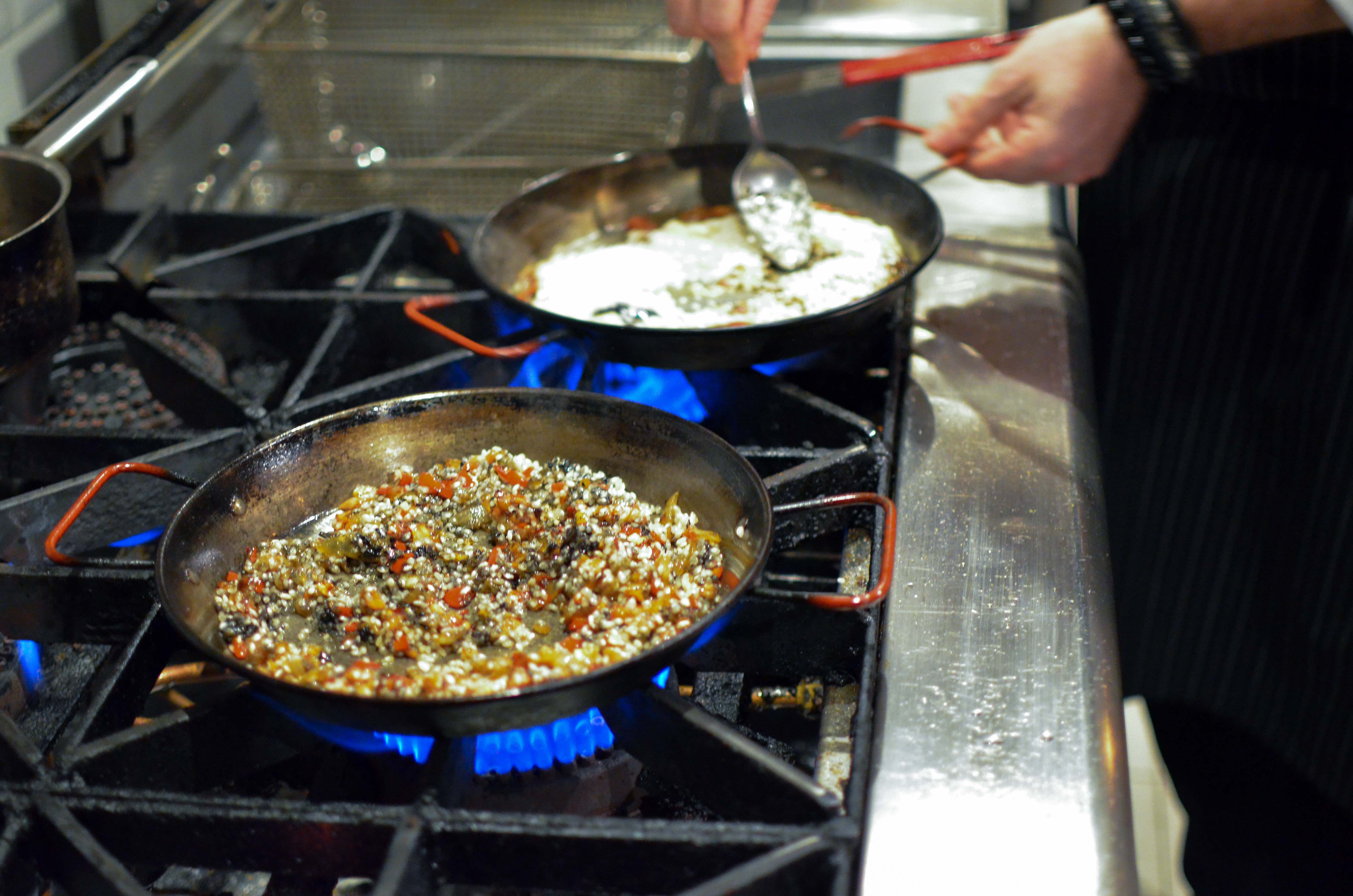 Setting the rice in the paella pan

We added fresh squid, red peppers, onions, rice, the seasonings and the squid ink to the pan and started to sauté them together. Then it was just a matter of waiting around, and we were treated to some delicious snacks while the paella cooked to perfection.

One of our favourites was the brandada de bacalao, a mild bacalao (salted cod) mousse with herbs and red piquillo peppers, which was creamy, colourful and flavourful. 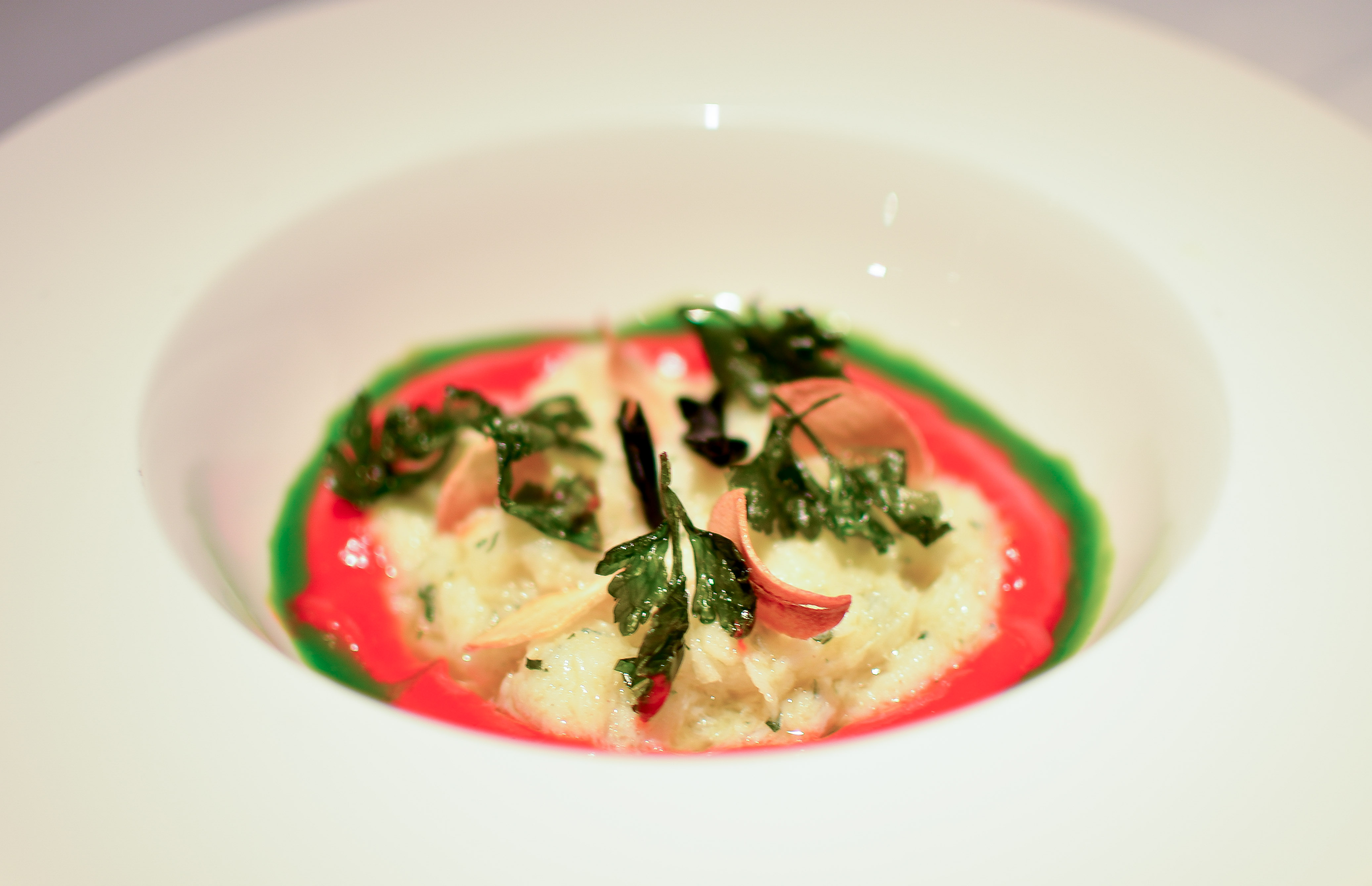 Another winner was the tartare de gambas, sweet shrimp with soya sauce, sesame oil and avocado dressing served as a canapé. Although not very Spanish, this Asian-inspired dish was fresh and had a nice balance between the sweetness of the shrimp and the saltiness of the soy. 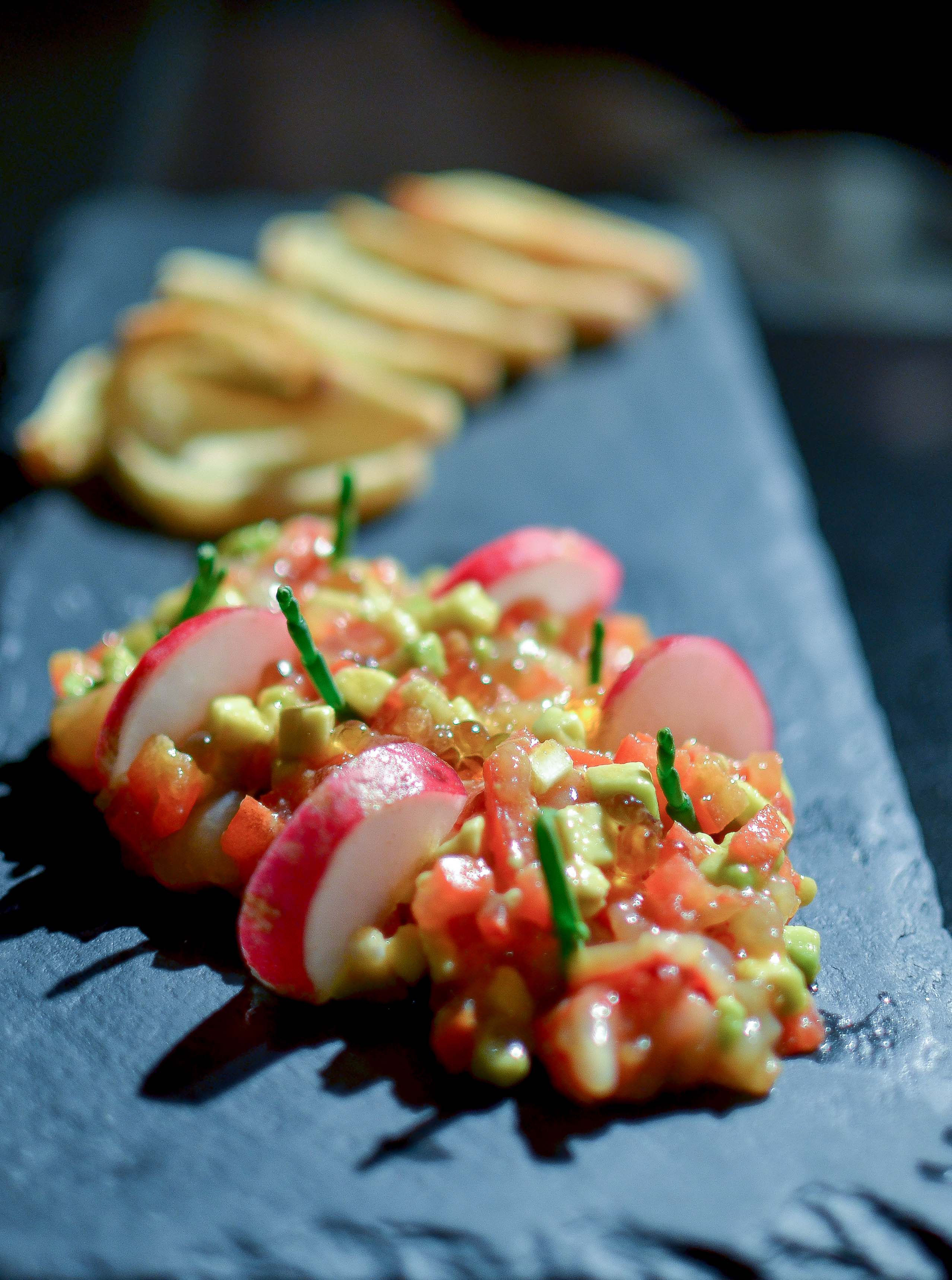 Finally, the moment we had been waiting for had arrived, and our black paella was complete. Food is always better when you make it yourself, and this was no exception. The paella had great complexity of flavour, with the squid, peppers and shrimp stock creating a pan of deliciousness. 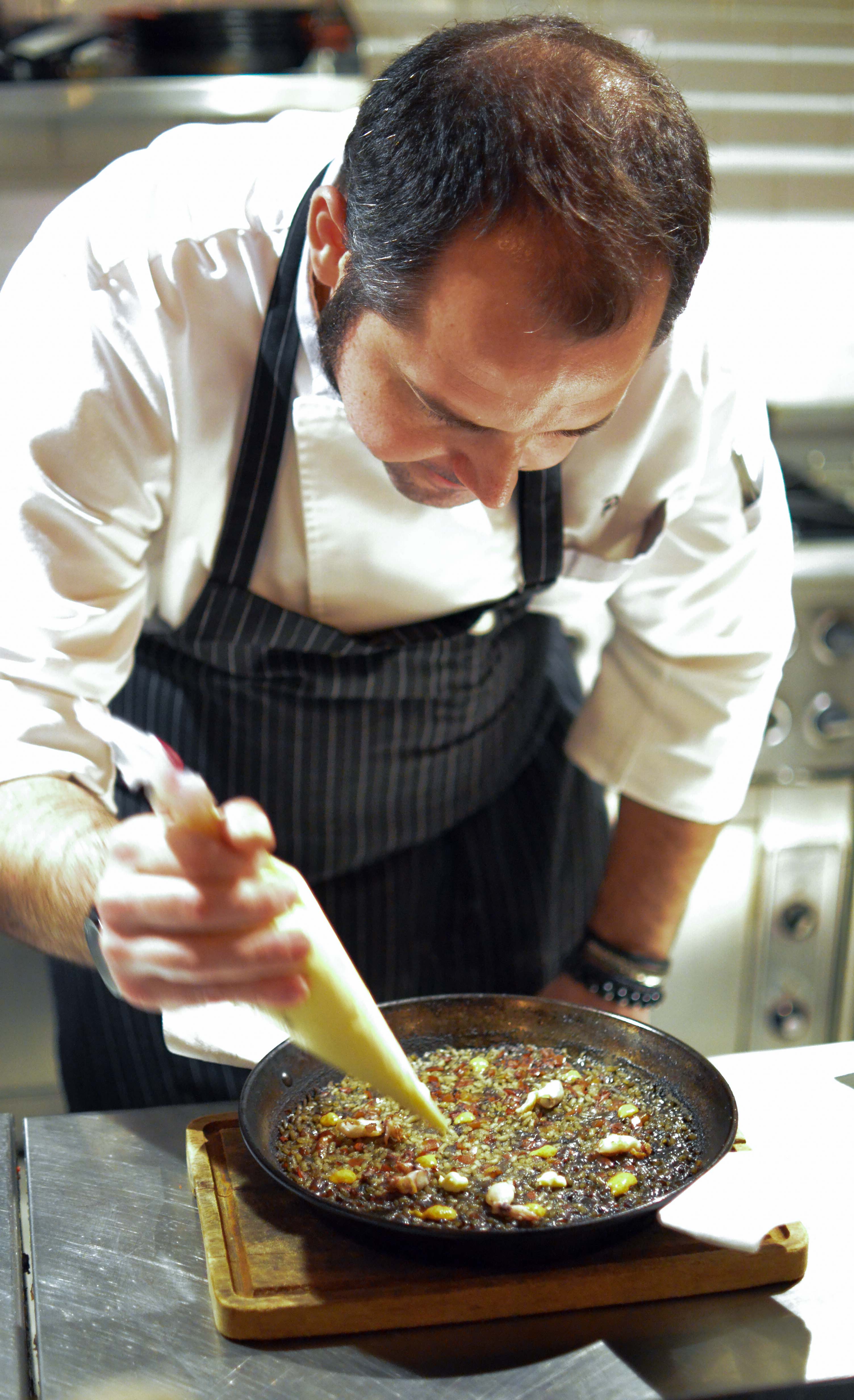 Chef Moreno putting the finishing touches on the paella 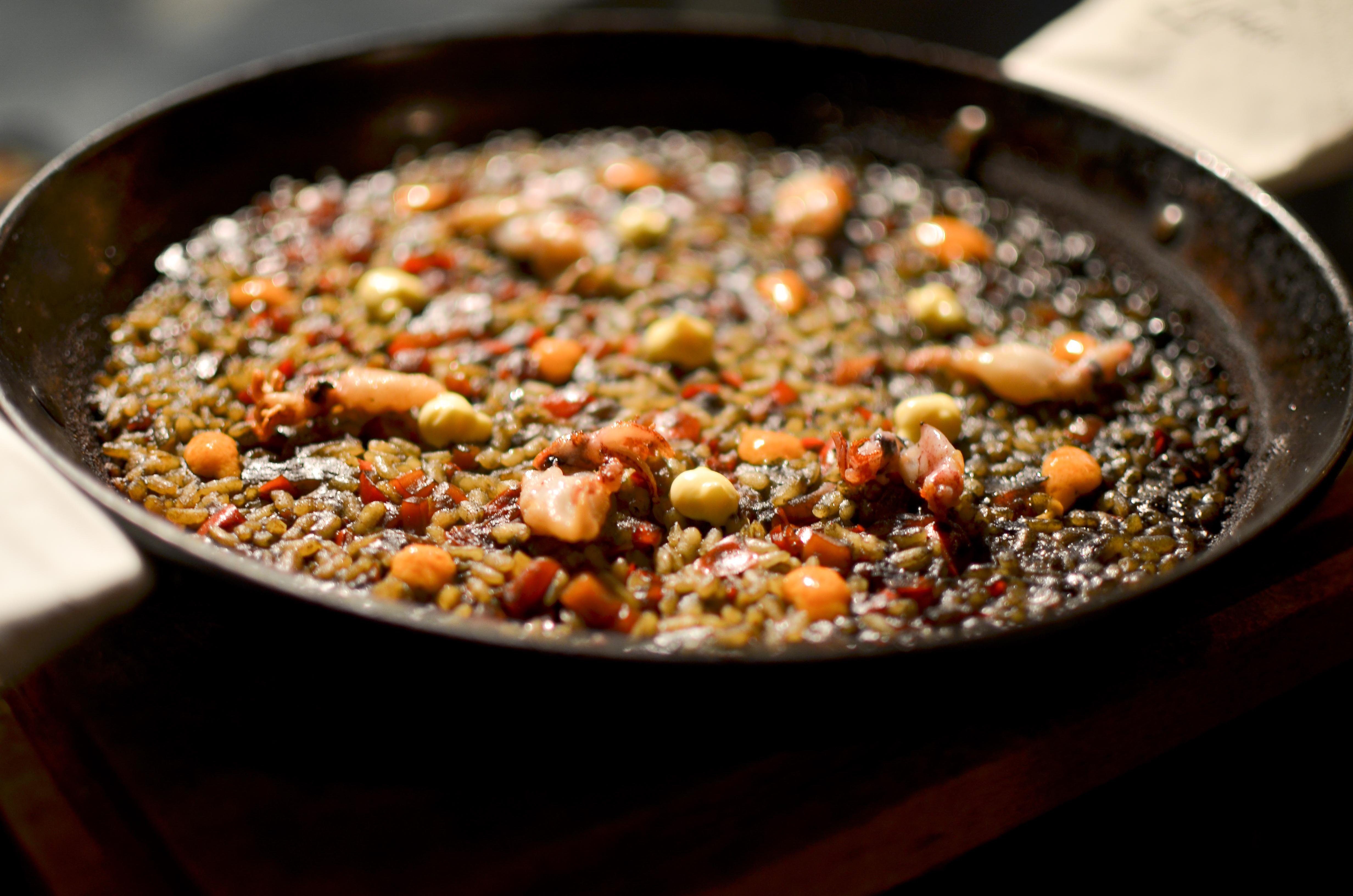 They’re not clucking around