Italian restaurants are everywhere in Hong Kong, but few have reminded me of the food I had in Italy. So I was a bit cautious with my expectations when I first heard about Operetta’s new authentic Italian menu by Chef Luca de Berardinis, who, until recently, headed Nicholini's at Conrad Hong Kong. However, as soon as the first dishes arrived, I realised the caution was for naught. The food was, without a doubt, just like what I had back in Italy. 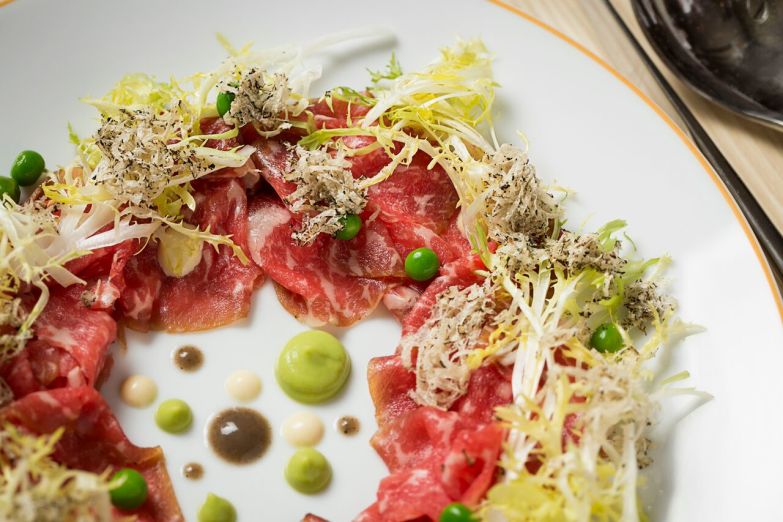 Chef Luca’s famed beef carpaccio ($140) was served first, with the smell of the black truffle sauce wafting throughout the room. Underneath the taste of the truffle were faint traces of coffee, with which the beef was marinated. The dish was surprisingly light, and the feeling of the beef melting on my tongue was simply delightful. 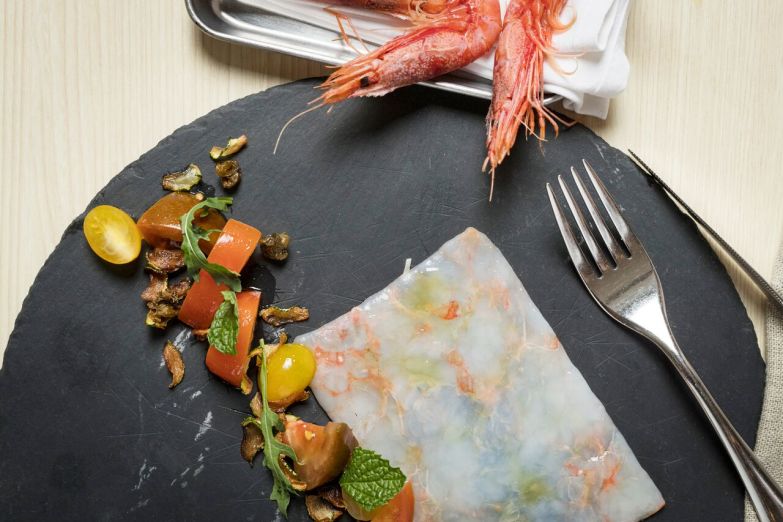 The shrimp tartare ($200) was also a light dish, with fresh and succulent shrimp. The baby courgettes gave the dish a bit of a crunch to match the shrimp and also some saltiness, while the summer tomatoes offered a colourful appearance and varying degrees of light sourness, cleansing the palate and making sure every bite was as tasty as the last.

The aubergine Parmigiana ($120) was soft and rich, with melted Provolone cheese, tomato sauce and basil covering it. The combination was unmistakably Italian, and even though it appeared to be a simple dish, it still managed to impress everyone at the table. 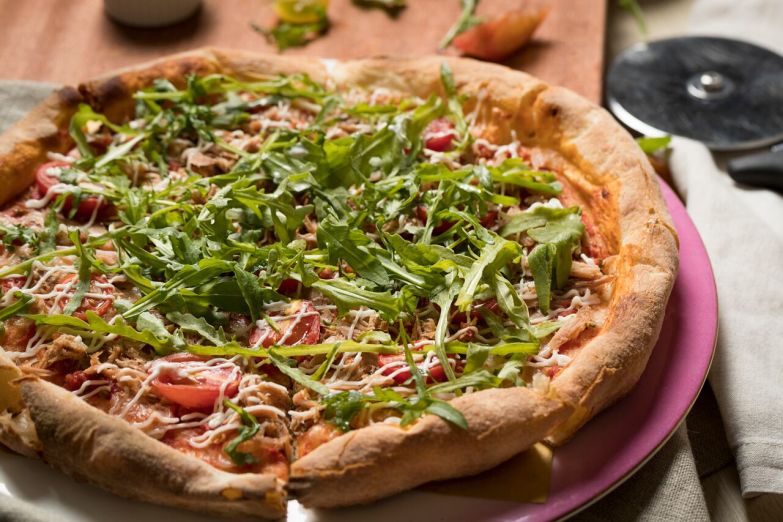 I was sceptical about the pizza tonno ($170), since I have never had very good experiences with tuna mayonnaise on pizza. However, the tuna and mayonnaise went extremely well with the mozzarella, rocket, cherry tomatoes, oregano and tomato sauce. But what was most impressive was the crust. It was fragrant and the texture was just right, so even the cornicione (outer edge) was not wasted. 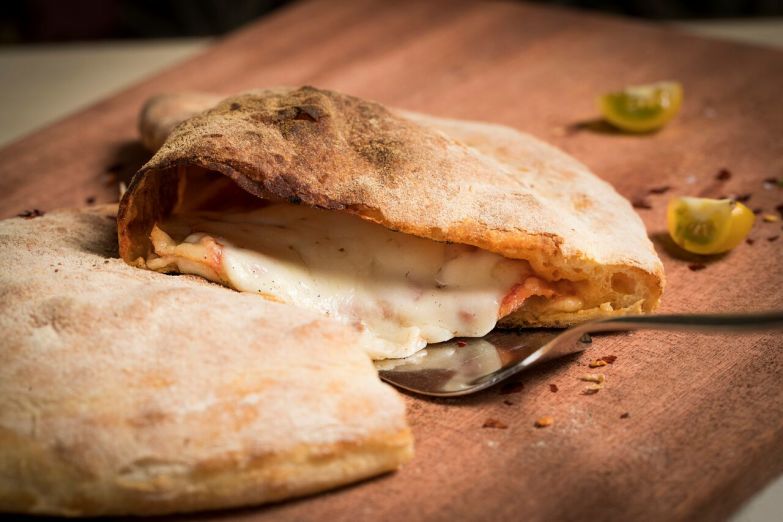 We eagerly moved on to the last antipasto, the calzone Provolone ($190). The calzone was soft and slightly chewy, filled with Provolone and mozzarella cheeses, and the smoked ham gently complemented these cheeses and the tomato sauce and thyme. Once again, Chef Luca showed that good food does not have to be fancy.

The antipasti were paired with La Staffa Verdicchio dei Castelli di Jesi 2015. This aromatic white wine from the Le Marche region of central Italy is fruity with some floral notes, and it was a brilliant match. 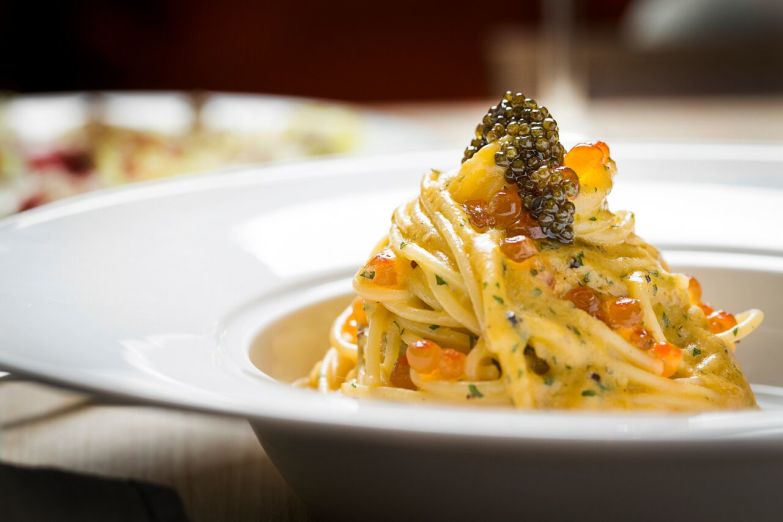 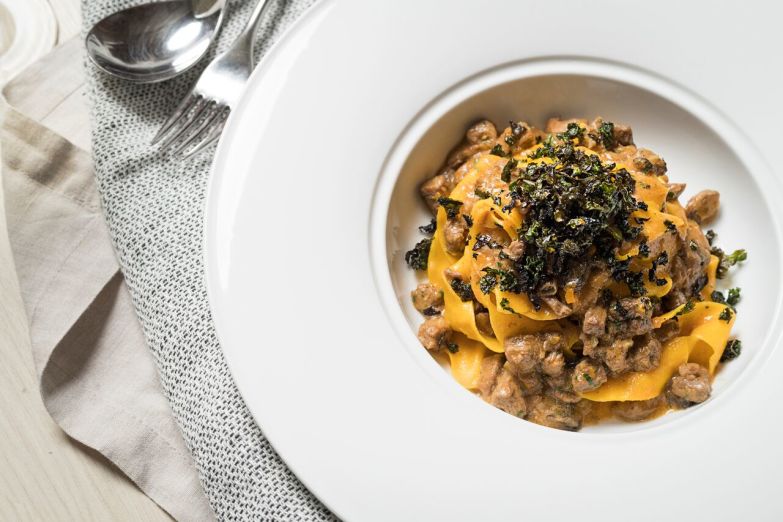 We were next served the spaghetti fish roe ”carbonara“ style ($280) and pappardelle lamb ragout ($180), both signature dishes of Chef Luca. The spaghetti was cooked to perfection, its al dente texture an indication of the quality of the pasta. This ”carbonara“ has neither cream nor egg yolk but uses sea urchin to give it a creamy texture and rich flavour. Speaking of egg, though, there are three kinds of fish roe in this pasta: caviar, salmon roe and bottarga roe. The bursting of the roe gave the dish waves of flavour, making it an instant favourite. I‘d also like to add that the appearance and texture of the dish was reminiscent of the best spaghetti carbonara I had in Rome.

The pappardelle lamb ragout was also very special, with fresh pappardelle and lamb ragout that had very little to no game smell at all. The morel mushrooms and lightly charred kale made for a warm, sumptuous pasta dish. We were told that Chef Luca and his team make 5–6 kinds of fresh pasta daily in the kitchen whereas the spaghetti, a dry pasta, is imported from Italy. The freshness of the pappardelle was evident in the soft, springy texture.

The pastas were paired with Ar.Pe.Pe. Valtellina Rosso 2014, an easy-drinking red with notes of cherry and berries. The wine lacked complexity, which made it a good choice to pair with the two rich pasta dishes. 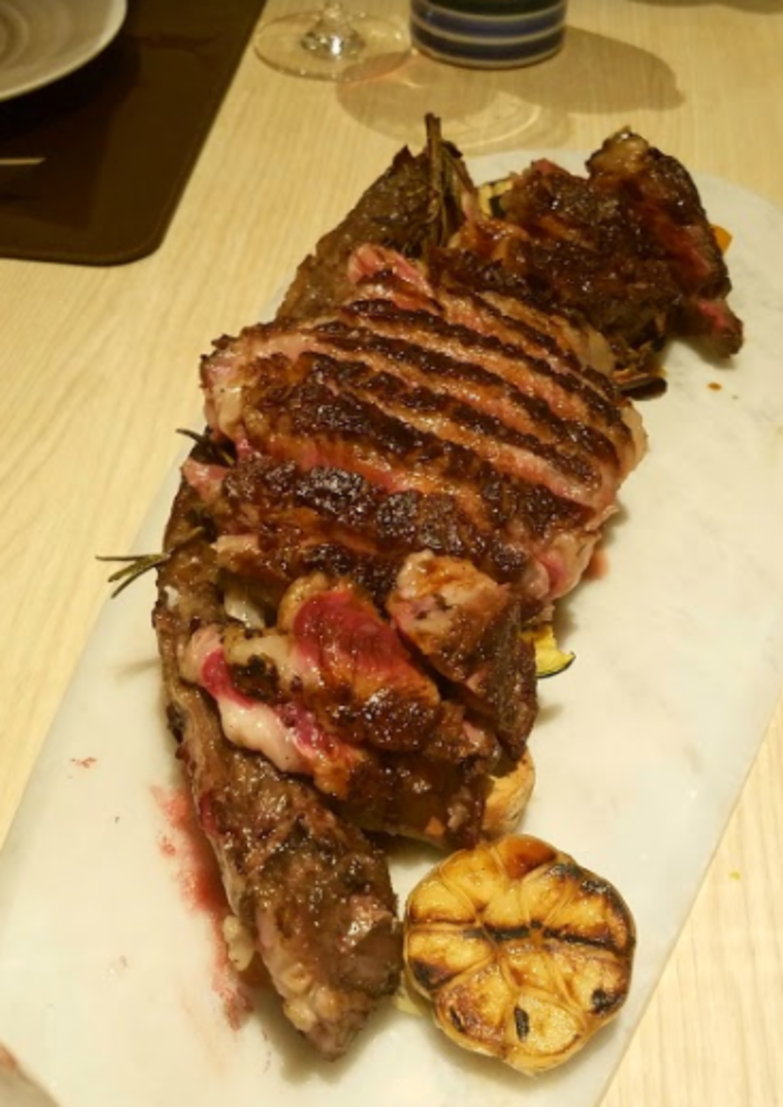 Moving on to the meat and fish, we were left speechless by the massive 1.2–1.5kg Australian Black Angus Tomahawk ($1,100), served with grilled vegetables and a long piece of bread that soaked up the juices. The steak was cooked to a perfect medium rare with a crispy surface sprinkled with salt and herbs. The meat was tender with some fat, giving it a rich taste. One minor detail to note is that there were some bits near the fat that required some extra chewing, not that it was enough to detract us from our enjoyment.

The spring chicken ”diavola“ ($290) was roasted under high heat, making the skin crispy while the meat remained succulent. It was served with chilli, grilled vegetables and rosemary-laced gravy, which I expected to be quite spicy given its name of ”diavola“, translating to “devil”. However, to my pleasant surprise, the spiciness was quite subtle. Turns out, the ”diavola” here refers to the high temperature at which the chicken is roasted. This was indeed an impressive roast chicken with a savoury rosemary gravy. 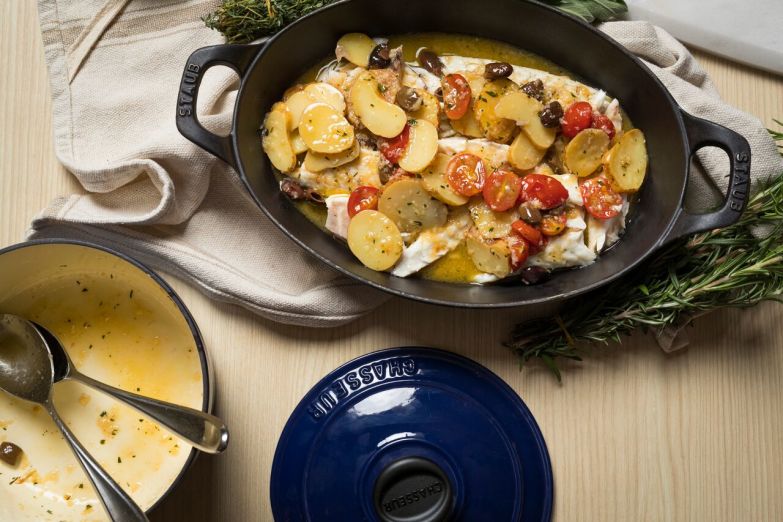 The oven-baked Italian sea bass ($430) was de-boned in front of us by the restaurant manager and then rearranged in a casserole pan with potatoes, cherry tomatoes and black olives. The flesh was smooth and tasted very fresh. The aforementioned ingredients were an excellent match with the fish, and for the first time in my life, I enjoyed olives and even took a second helping!

The meat and fish were paired with Il Marroneto Roso di Montalcino ”Ignaccio“ 2014. This red was full-bodied, with notes of rose and red berries and a slightly spicy finish. It was well matched with the dishes, especially the Tomahawk and chicken. 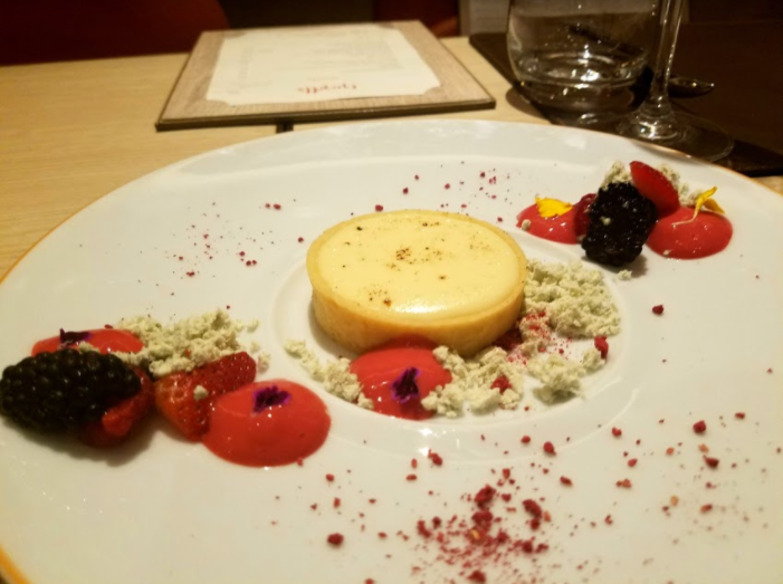 With our bellies almost full, we forged forward with the desserts. We started with the warm mascarpone cheese tart ($100) with pistachio powder and raspberry foam, garnished with strawberries and black raspberries. The cheese tart was quite light, and the sour raspberry foam and fresh fruits left with us a pleasant summery feeling. 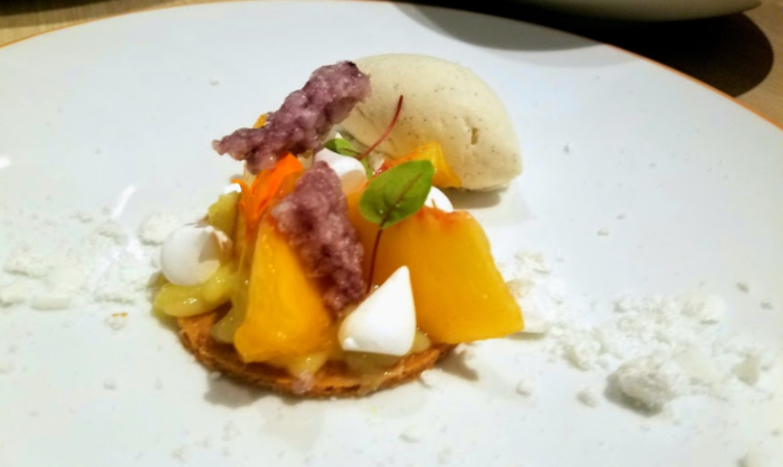 Next, we tried the lemon tart ($90) with Italian yellow peach, tapioca crunch and a scoop of vanilla ice cream. It was sour but in the best way. Some lemon tarts are so sour that they make your face pucker and shiver, but Chef Luca managed to have the sour taste stop before it hit that point. The resulting taste was an exciting sweet-and-sour combination, with the lemon and peaches melding well. The tapioca crunch gave it another layer of texture, while the ice cream provided a slightly sweet taste and also cleansed our palates for the final dessert. 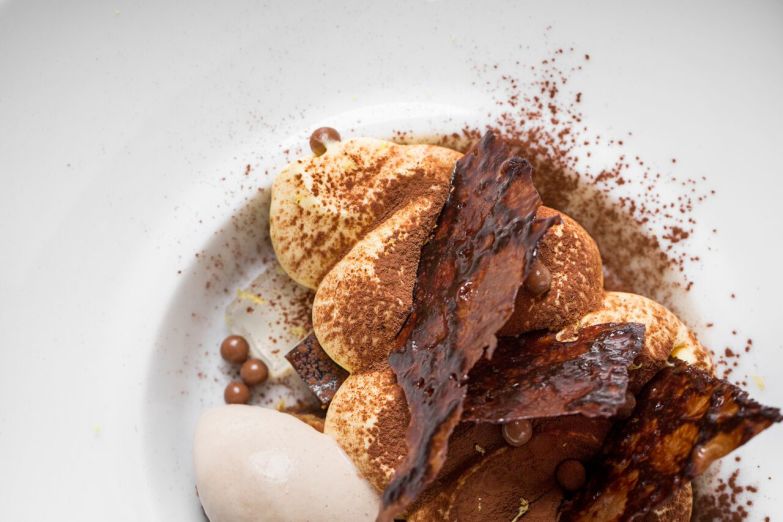 The desserts were paired with Ca‘ d’Gal Lumine Moscato d‘Asti 2016. This aromatic dessert wine was not overly sweet, and its aroma had us excitedly wondering if there was a perfume that smelled like this.

The food at Operetta is absolutely outstanding. Some people may find the prices a bit steep, but for food of this quality, I would say the prices are quite reasonable. The whole atmosphere of the restaurant was comfortable, and of course, the food made for an unforgettable experience. For filmgoers waiting for their screening to start at the cinema next door, Operetta is coming up with a cocktail and bar snacks menu soon, so keep an eye out!