Maestro from Modena vs. Top Lady Chef from Taichung

Each infusing culture and wit, both are sublime. A look at Lanshu Chen from Taichung and Massimo Bottura and comparison of two of their meals

I must confess this piece is not particularly helpful for those looking for a cosy hang out place in Hong Kong this weekend. Recently I had a delightful dinner with Lanshu Chen (La Mout in Taiwan) a guest chef at a private event in Hong Kong, a familiar name in the territory being Asia’s best female chef with a number of accolades under her belt and not too long ago she was guest chef at the Ritz Carlton. Chef Chen's dinner stirred up some memories of a lunch I had some time back at the famed Massimo Bottura's Osteria Francescana in Italy, when he was not quite as well known as he is now (still then a two-starred establishment). Taichung and Modena are two establishments that could not be further apart but the two restaurants are both respectively on Asia’s 50 best and the world’s 50 best three star restaurants, saying they are well worth a detour if one is venturing further afield and that their dishes are truly epic.

It is hard to cook, as is often said, in someone else's kitchen. Chef Chen did just that and two exquisite dishes have stuck with me ever since. She has long honed her skills in French cooking at Le Cordon Bleu and under the wings of master chefs in Paris. Her cooking is from the French classic school spiced up with her own take on all of it. The starter was a foie gras royale, not the standard interpretation but a luscious warm, deep, mellow, thick liquid of foie gras espresso (with hints of marsala and kumquat in the background). It was so intense none of us spoke for awhile to let the “espresso” sink in. This sounds a trifle pretentious but such was the effect. Small and spectacular, my somewhat restrained imagination has not contemplated foie gras being served in any form other than terrine-like, and more importantly it was truly delicious. 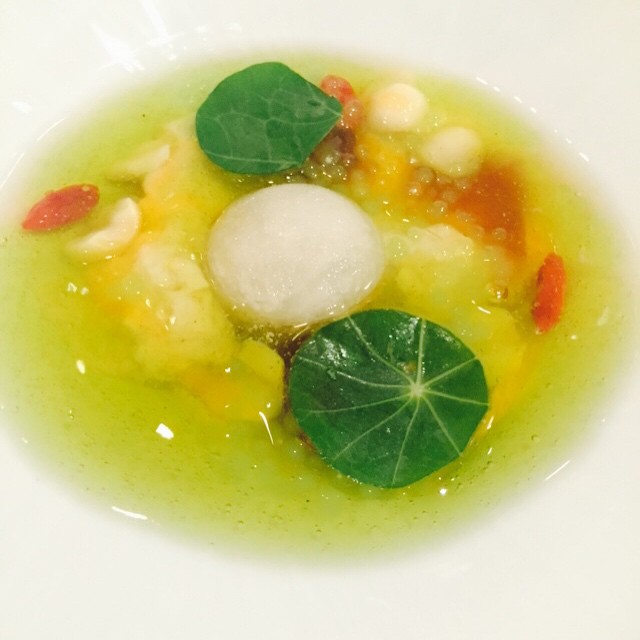 The next revelation was the dessert. It was simply named Nympheas, and forgive my ignorance, it immediately conjured up a picture of nymphs in a pond (it is actually a botanical name for the water lily). Low and behold the plate was presented and it resembled literally Monet's Water Lilies series. The Monet inspiration is essentially translated to a cold elderflower syrupy concoction with tofu fa, wolfberries, sago and other good stuff sitting languidly that strangely conveyed a sense of calm. It was visually stunning (the photo does it injustice), art meets cuisine, and the taste was incredibly refreshing with the sago and tofu texture complementing the flowery sweetness. The dessert’s Chinese take is a striking contrast with the Western starter and to think one so young could be inspired to do all of this! It is also gratifying to see tofu and wolfberries, both traditional Chinese staples featured in the world of “haute cuisine”.

Just why would all that make me draw parallels with Massimo Bottura? I am in awe with both chefs’ immense creativity that underlies their food (his “camouflage” dish is known to be inspired by Picasso). Within the ancient walls of Modena, Osteria Francescana has a modern decor. While the tortellini en brodo was intense in flavour (in my humble opinion up against any tortellini I infinitely prefer our own wonton), the desserts left a huge impression on me and may partly be why Chef Bottura has been known for having reinvented Italian food. 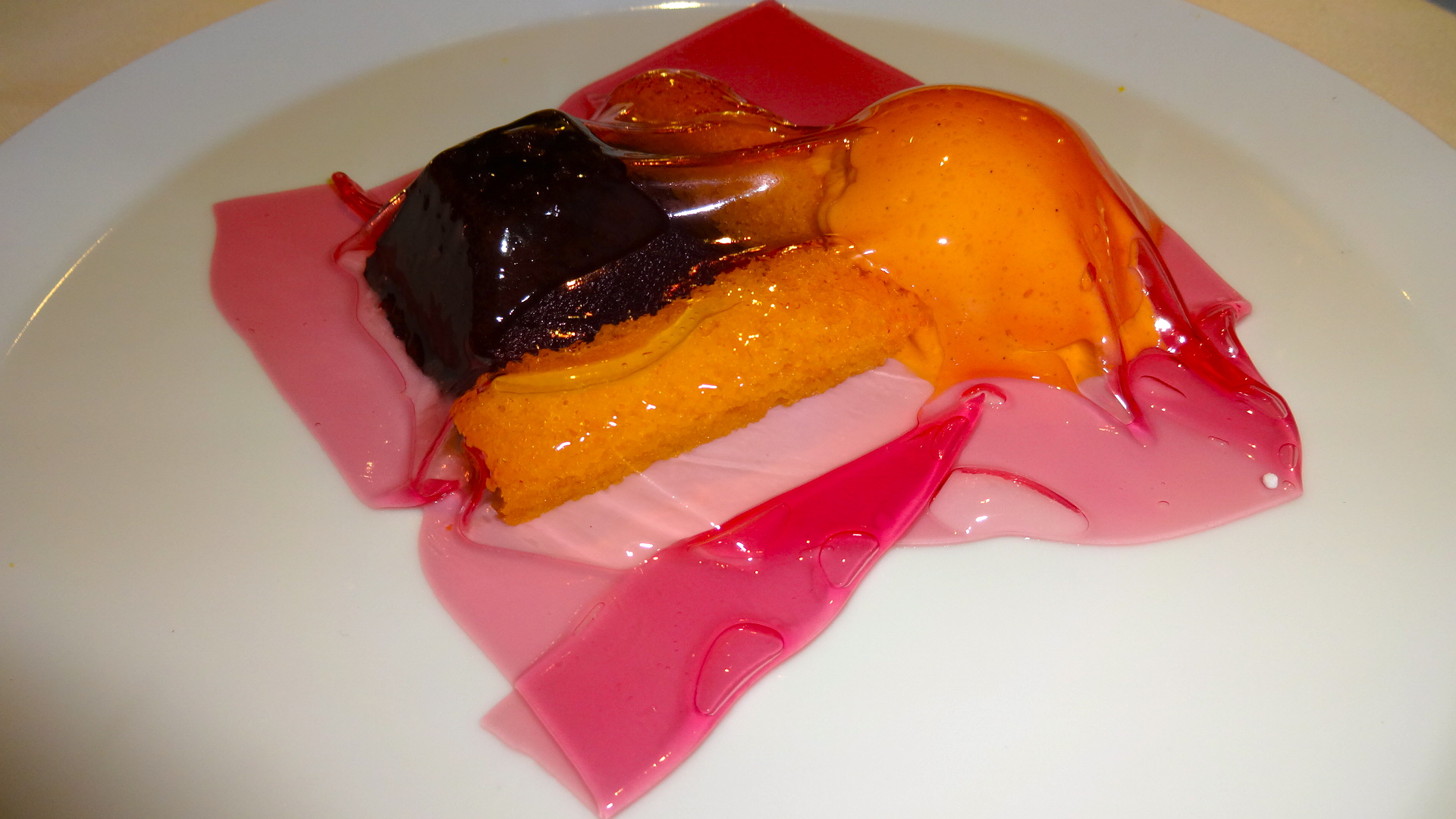 I had the zuppa inglese, the story has it that the grand dukes in the Emilia-Romagna region fell in love with trifles on a visit to the English courts and asked for it to be at home (aptly named “English soup”). Much like the English trifle, this dessert ordinarily consists of layers of custard, cream, sponge cake soaked in liqueur and fruits. Such is what I was expecting. The maestro, however, deconstructed the entire zuppa inglese into its own elements covered under a jelly-like canopy. It had quite a seismic effect on me, my palate is really not so sophisticated, and processing a traditional trifle is altogether different when they are individually singled out. The concept of “deconstruction” has since cast new perspectives for me.

A more astonishing construction came next. My memory is slightly hazy and I could not recall the name but I do remember that the idea is that the dessert resembles beer. I was at once intrigued, because not only am I very fond of beer but how on earth could it be transpired to a sweet dish? The brick-like structure came along with light beige ice-cold foie gras (think barley) sandwiched between liqueur-soaked yellow sponge cakes topped with three-finger foam, that of course tasted bitter (think beer)! I much admired the very wit of it! The taste was more savoury than sweet, an intellectual force trumping my rigid state of mind, while the meaning of dessert and food has taken a new turn for me. 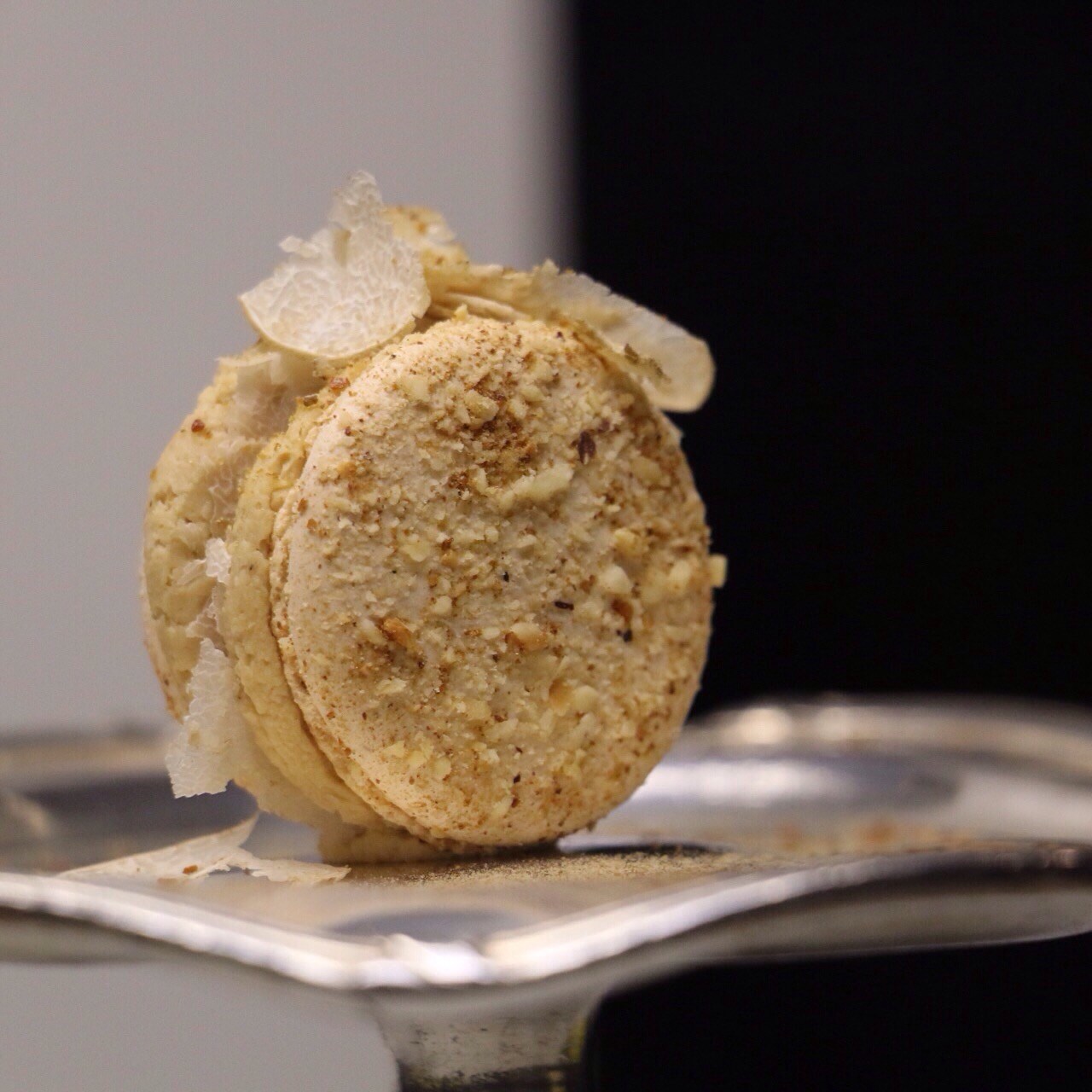 It is no surprise then the foie gras continues to feature prominently in Chef Bottura’s sweets. I read that on an occasion, when Prime Minister Matteo Renzi hosted President Hollande for dinner at none other than Osteria Francescana, the dessert served was macaron with foie gras and white truffle. Italy meets France, a bridge of culture and cuisine, to me a significant mark of a chef’s vision of the world perhaps, and undoubtedly a great deal of good it has done to the world of diplomacy.