From Dragons to Dumplings

Chinese New Year, Lunar New Year, Spring Festival – whichever phrase is used, it’s the grandaddy of dates on the Chinese calendar, devised according to the cycles of the moon. It begins on the first day of the first month of the lunar calendar, and the celebrations continue for the next 15 days, culminating with the Lantern Festival (and the consumption of can’t-stop-at-just-one glutinous rice balls filled with black sesame or red bean paste). This year marks the 11th cycle of the 12-year Chinese zodiac – the Year of the Dog – beginning on Friday, 16 February 2018.

The origins of Chinese New Year are rooted in the myth of a fantastical beast called Nian that was known to terrorise villagers, even – shudder – consuming children. In an attempt to scare away the creature, the villagers bombarded it with bright lights, loud noises and red-coloured items – its only fears – until it slinked away into oblivion. Still to this day, the act of staging ear-splitting fireworks displays, wearing red clothing (with Hong Kongers having a particular penchant for red undergarments) and decorating with red paper lanterns are common practices during Chinese New Year. The colourful and lively troupes of lion and dragon dancers with their drums and cymbals, so closely associated with CNY, can also been seen as harking back to the ancient Nian myth of repelling evil spirits.

If you’ve been in Hong Kong for even 24 hours, you’ve most likely come to realise how important food – and sharing it with friends and family – is in the Chinese culture. Some (we’re not naming names) may go so far as to say it’s an obsession. This is no more the case than during Chinese New Year, with food the ultimate focus.

The eating festivities begin on Chinese New Year’s Eve, with families gathering together, normally at home, to celebrate with a special meal and to remember and honour dearly departed loved ones. Former Hong Kong resident Alexa Zhang, originally from Anhui province in China, says her most vivid CNY memories involve cooking: “wrapping dumplings and hanging out in the steamy kitchen while the adults cooked all day on CNY Eve”. Her best-loved childhood CNY foods include homemade meatballs, clay-pot dishes, glutinous rice with nuts, dates and ham and – of course – dumplings. She explains, “Dumplings are always a favourite because it’s fun to prepare and wrap together as a family and delicious when served.” On the sweeter end of the spectrum, lifelong Hong Kong resident Sarah Cheung’s favoured CNY food is nian gao, a steamed sticky rice cake whose name sounds like “higher year” in Cantonese.

Like Sarah’s adored CNY cake, symbolism is at the heart of many other CNY food traditions. Noodles, which should be served uncut, are symbols of longevity. A whole chicken – and, yep, that includes the tail, feet and head – symbolises completeness. Tonnes (literally) of Beijing-style dumplings (jiaozi in Mandarin), whose shapes are said to resemble ancient Chinese money, are wolfed down. Other foods are favoured for their homophonic nature. Take the Cantonese word for fish – yu – for instance. Its pronunciation sounds similar to the word meaning abundance. It’s even better if the fish is served steamed; Alexa explains that the Chinese translation of a steamed dish is the poetic “life is better each day”. Then there’s the staple snack of steamed or fried turnip pudding (lo bak go); its name sounds like “good fortune”. The bottom line is, whatever you eat, it must not only taste good, but it should also contribute to your prosperity in the new year. 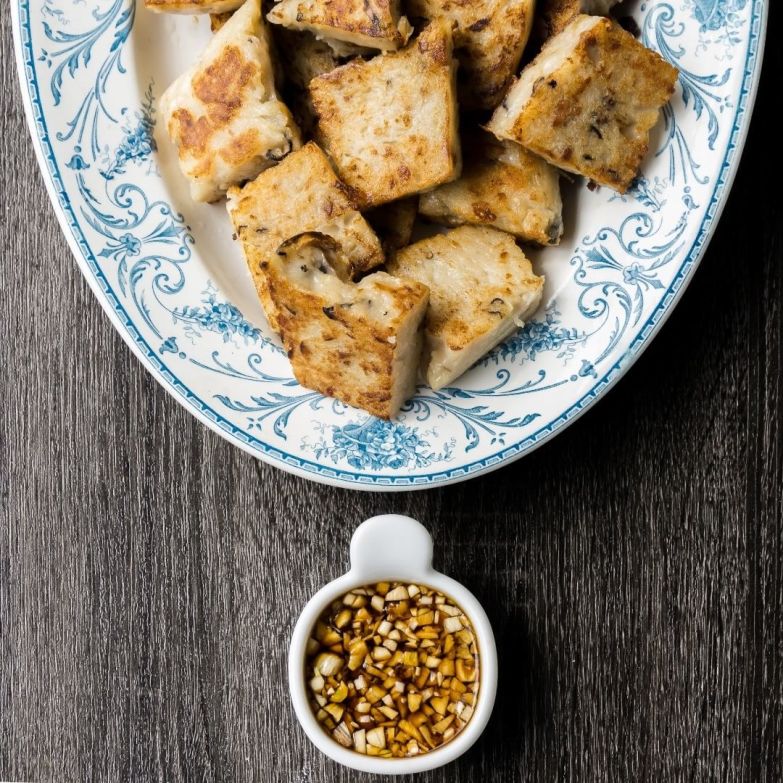 Impress your guests with piping-hot homemade turnip pudding with air-dried meat, courtesy of this recipe from Michelin-starred Shang Palace at Kowloon Shangri-La. 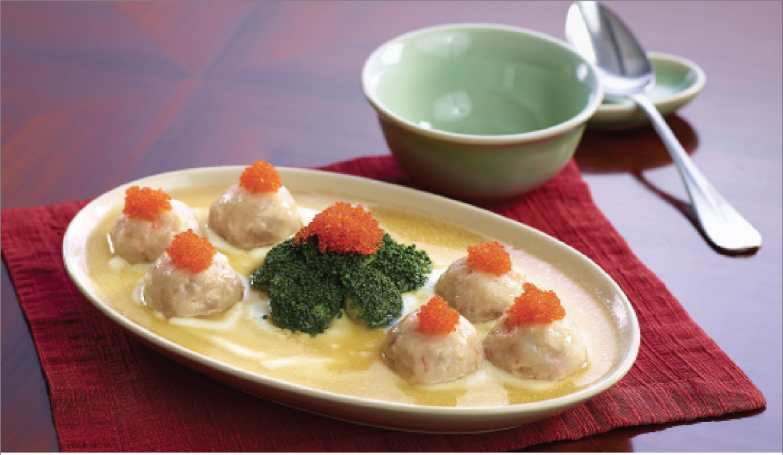 This CNY recipe from Sha Tin 18 at the Hyatt Regency not only looks and tastes beautiful but is a cinch to put together.

Don’t wash your hair (and other superstitions)

As Stevie Wonder sang, superstition ain’t the way – unless you’re celebrating Chinese New Year, when superstitions, good-luck charms and malevolent omens abound. This means that even though your locks might feel unbearably greasy, don’t wash your hair on New Year’s Day; you may just lather away all your good luck in the coming year. Some other curious CNY superstitions include:

• It’s important to do a thorough spring-clean of your home before the big day, but – whatever you do – all brooms, mops and brushes must be stashed away on New Year’s Eve (would you want to sweep all your good luck away?). Shenzhen-born Shaowei Lai says that she and her parents clean their home from top to bottom, from the ceiling to each Venetian blind. She continues, “My mum and I also decorate the house, which I enjoy doing very much. We usually stick on both sides of the front door, as well as the top of it, a set of Chinese poems written on red paper. We also stick some red paper with nice words written on it (such as ‘luck’) around the house. We always buy a big orange/clementine tree and put it in the living room to represent luck. The tree is usually decorated with lai see.” When it comes to preparing her home, Sarah likes to decorate with fresh flowers. Decking out your abode with plants and flowers such as delicate pink plum blossoms is considered particularly fortuitous.

• Similar to the unwashed-hair rule, the use of knives and scissors on New Year’s Day is a big no-no. So postpone that knitting project, unless you want to sever your fortune.

• CNY is the perfect excuse to buy yourself that new shirt or jacket you’ve been lusting after – even better if it’s a pair of jeans. New clothes are synonymous with new beginnings, and the Chinese word for trousers sounds like the word for wealth. Skip the new pair of trainers or stilettos, though; the Cantonese word for shoe bears a strong resemblance to the sound of someone sighing in frustration. Don’t say we didn’t warn you! 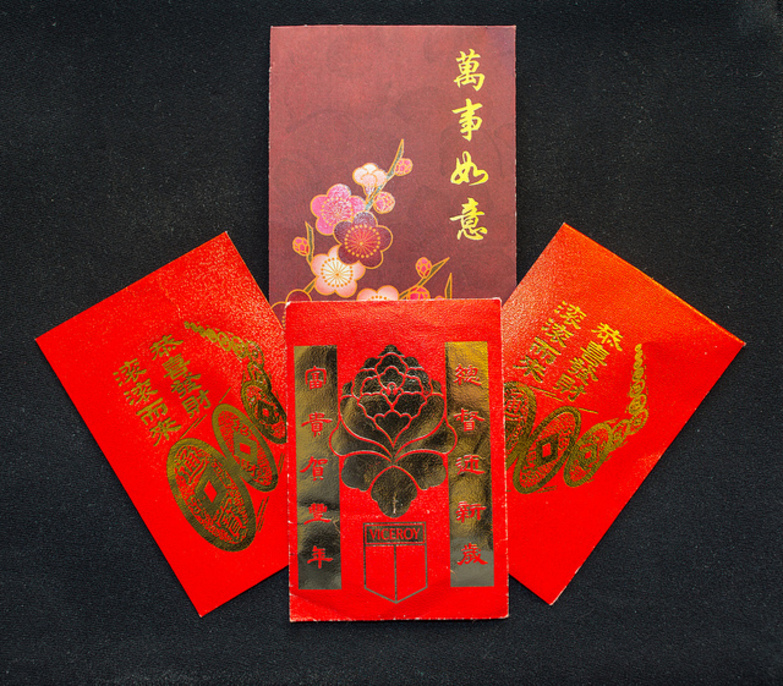 No CNY discussion would be complete without mentioning lai see. These coveted red envelopes are stuffed with cash, preferably new, crisp notes. They’re traditionally bestowed on children and young singletons by married couples and elders – and sometimes (hint, hint) on juniors by their bosses – as a form of good luck. The superstitions continue here: the envelopes are red and the cash amount they contain should be even numbered (cash gifts ending in an odd number are reserved for funerals). Lion-dance performers may also be recipients of lai see – Shaowei remarked that, as a child, the dancers would be bold enough to knock on the door of her family’s flat following their performance.

Food-related gifts are also common, and it’s considered extremely poor form to arrive at a friend or relative’s home empty-handed, or even when meeting at a restaurant. Tangerines and mandarin oranges, especially with their leaves still intact, are classic presents, due to their associations with good luck and wealth; in Cantonese, the pronunciation of mandarin (kum) sounds like gold. Apples are good bets too. Shaowei explains that they represent safety. We reckon a lovely box of chocolates or biscuits also wouldn’t go amiss (although we’d recommend being a bit more original than the ubiquitous Ferrero Rocher boxes seen in 7-Elevens across town).

So, on Chinese New Year’s Eve, whether you’re chowing down on dumplings at a dai pai dong or ooh’ing and aah’ing over the fireworks across Victoria Harbour (or none of the above), we wish you Kung Hei Fat Choi!