A lunch buffet on a budget

If you're tired of the normal set lunches around Hong Kong and are looking for a bit of a fancier spot to check out during the weekday, you should head over to the Weekday Lunch Bazaar at Lily & Bloom. Located in the heart of Central, the inviting and trendy atmosphere of Bloom is a great way to spend an hour or so away from the office to fuel up on a wide range of food options. This lunch bazaar is only $168 and includes their soup of the day, salad bar, seafood bar, carving station, and a mac 'n cheese station, plus coffee and dessert to finish off your hearty meal. 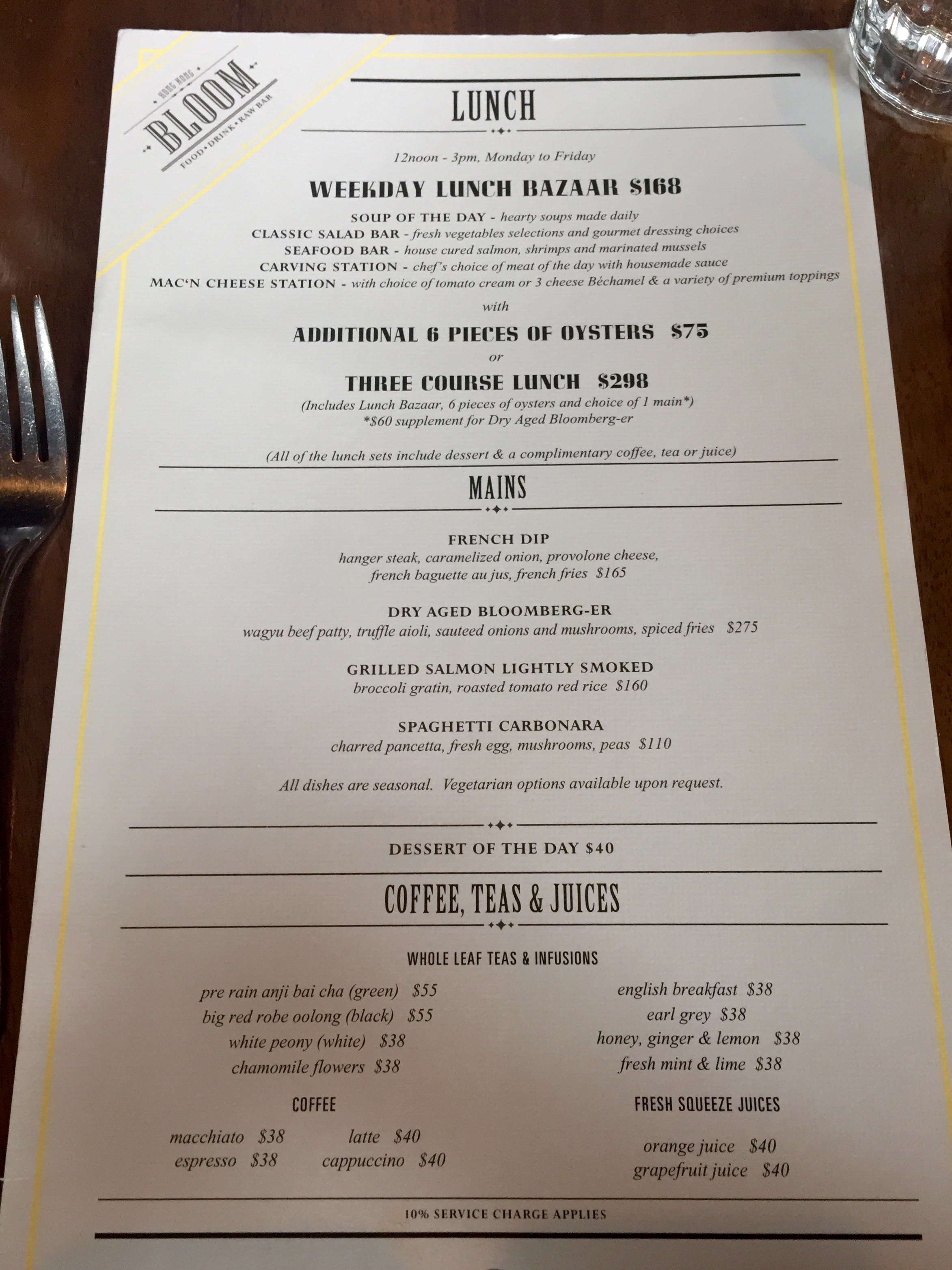 When we arrived, the waitstaff promptly sat us at our table and remained very attentive throughout our meal - constantly refilling our water, clearing our table, and ensuring we were enjoying the food. There were only a few other occupied tables, but the room quickly filled within the next 45 minutes. 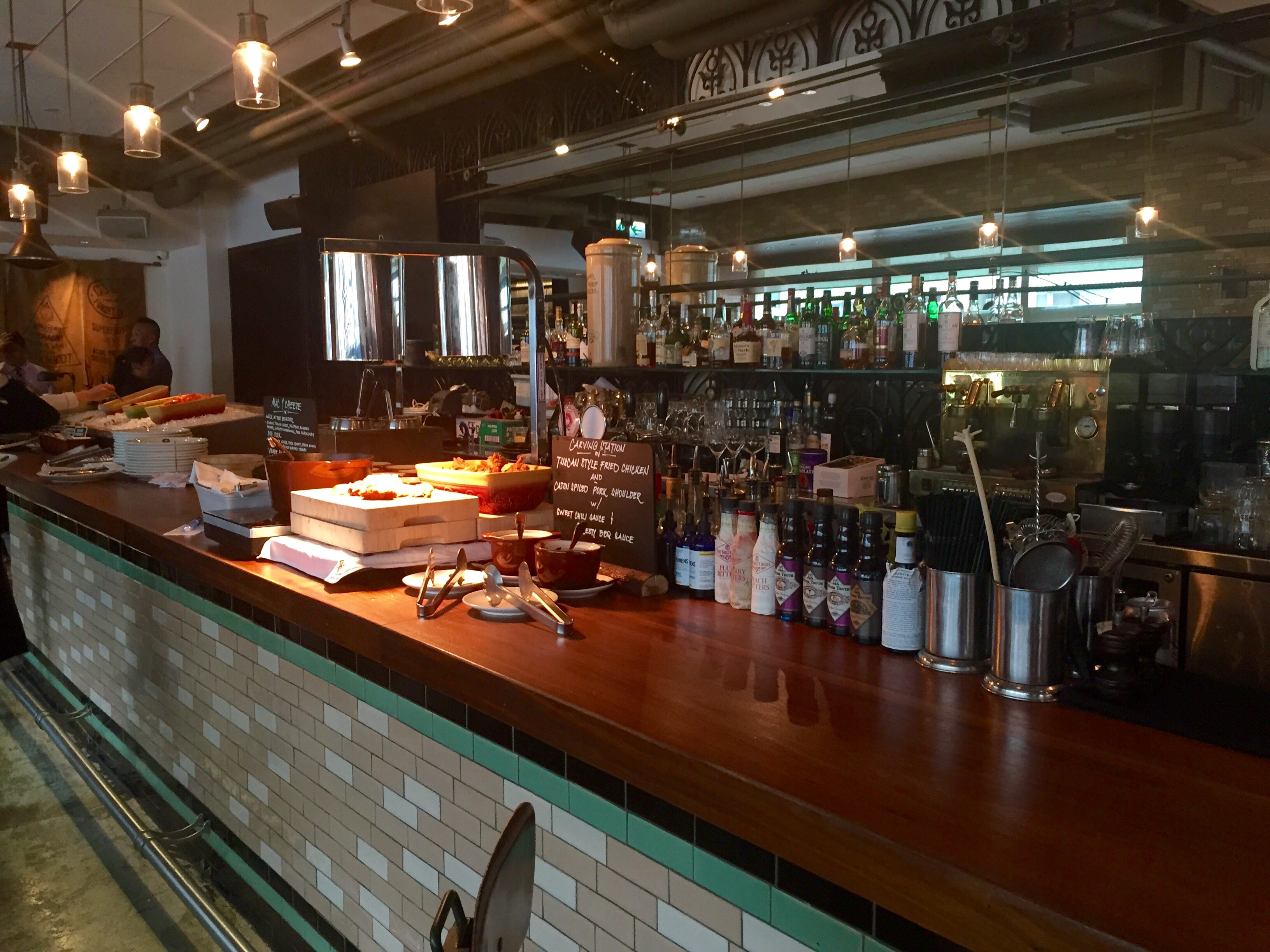 To begin our meal we had the soup of the day; pea soup with cream and chives, and seafood broth with spinach. The pea soup was good, but not exactly memorable. My friend who had the seafood broth soup said it was very flavourful (oh, the regret..).

The buffet selections by the bar were good, but not as good as I was hoping for.

For the seafood, there was salmon, shrimp, mussels, and tuna nicoise. All were good, but nothing that really blew my taste-buds away, unfortunately.

The salad bar had a bit more on offer with dishes ranging from cauliflower and tomato salad, to mixed greens and beetroot. On the opposite side there were a few dishes with cheese and salami. Some of the dishes were really tasty, while others were bland. I guess you can never have it all with a buffet. 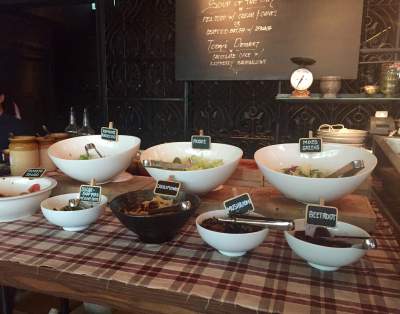 When the menu said "carving station" I had pictured a big hunk of meat with the chef behind it, cutting it into slices and putting it on the plates of those eagerly awaiting a taste. Unfortunately, this is not Bloom's version of a carving station. Instead, they had Tuscan Style Fried Chicken, which tasted like it had been left under the heating lamp or in the fryer for far too long and Cajun Spiced Pork Shoulder, which was much better than the chicken, but didn't have that Cajun kick I was expecting. 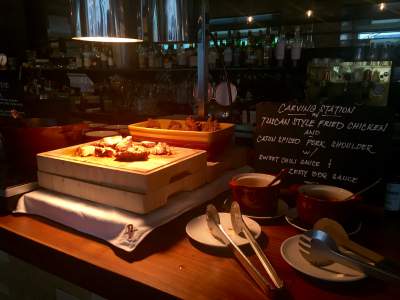 I had two helpings from the buffet 'cause I'm a bit of a fatty. The edamame salad was definitely my favourite, but nothing else really stood out enough for me to have a second helping of. 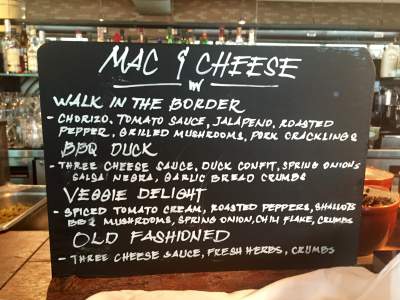 We had almost reached the point in our meal when we would have to undo our pants, but then we realized that we hadn't even tried the mac 'n cheese yet. So, naturally, we ordered two flavours: "Walk in the Border" - a very different take on the traditional, but I liked the blend of the ingredients, though they were a bit sparse. "Old Fashioned"- a classic flavour, but there wasn't nearly enough cheese; a box of Kraft Dinner might have done me just as well. 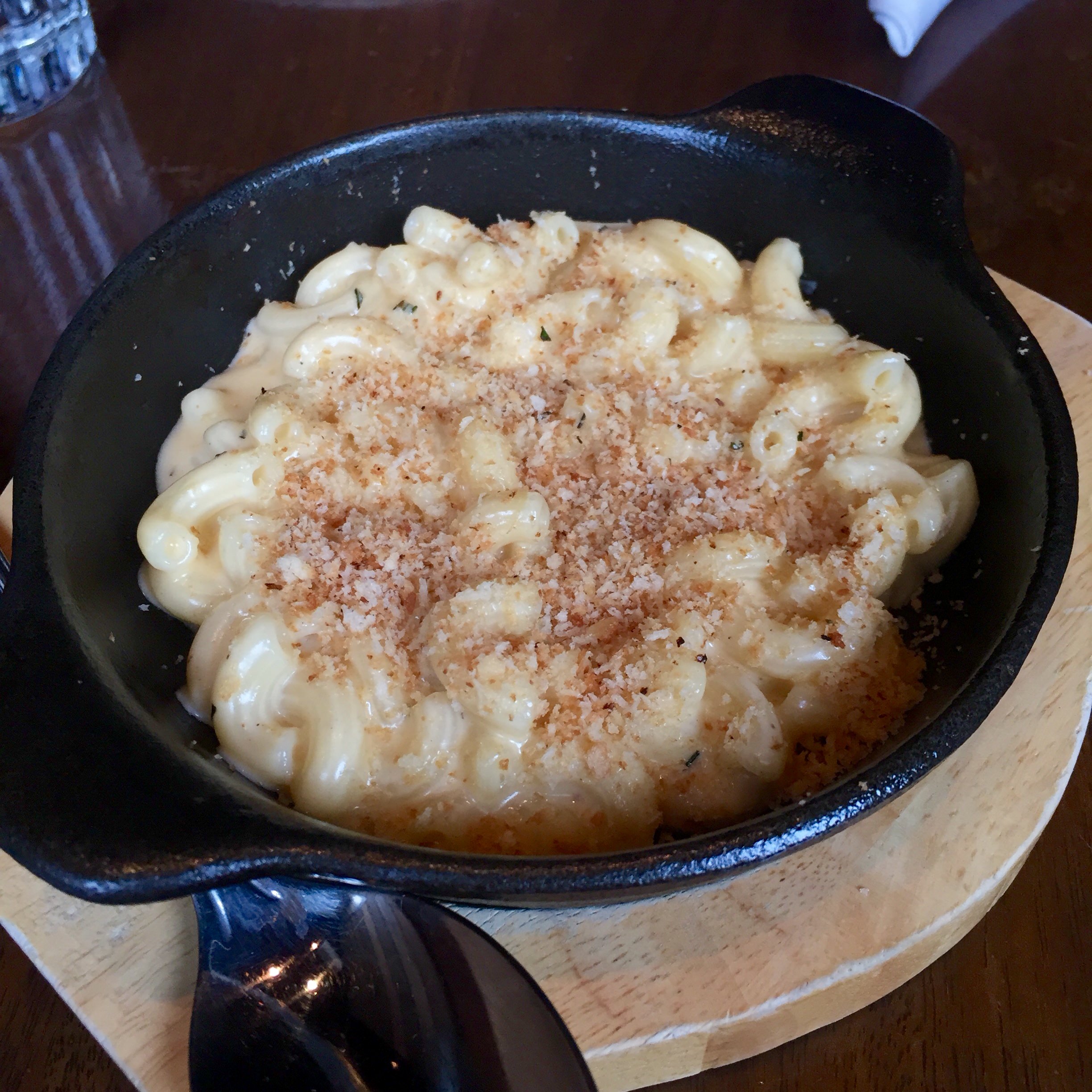 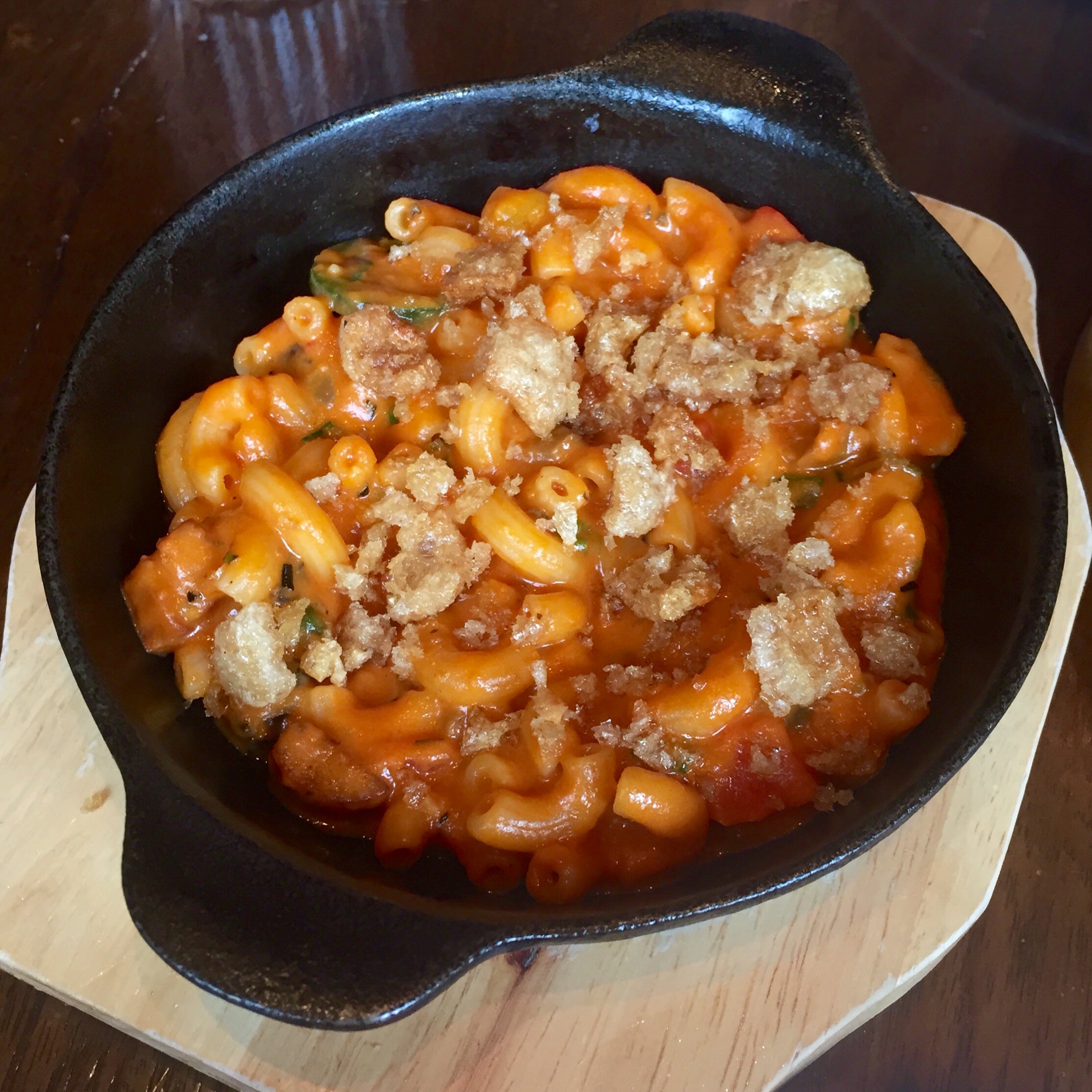 After we had finished our lunch, they brought over coffee and the dessert of the day, which was Chocolate Cake with Raspberry Marshmallow (included with the purchase of the lunch bazaar). The coffee was perfect and I really enjoyed both the chocolate cake, which was rich and creamy, and the subtle taste of the raspberry marshmallow. Finally, a course of this meal I really enjoyed! 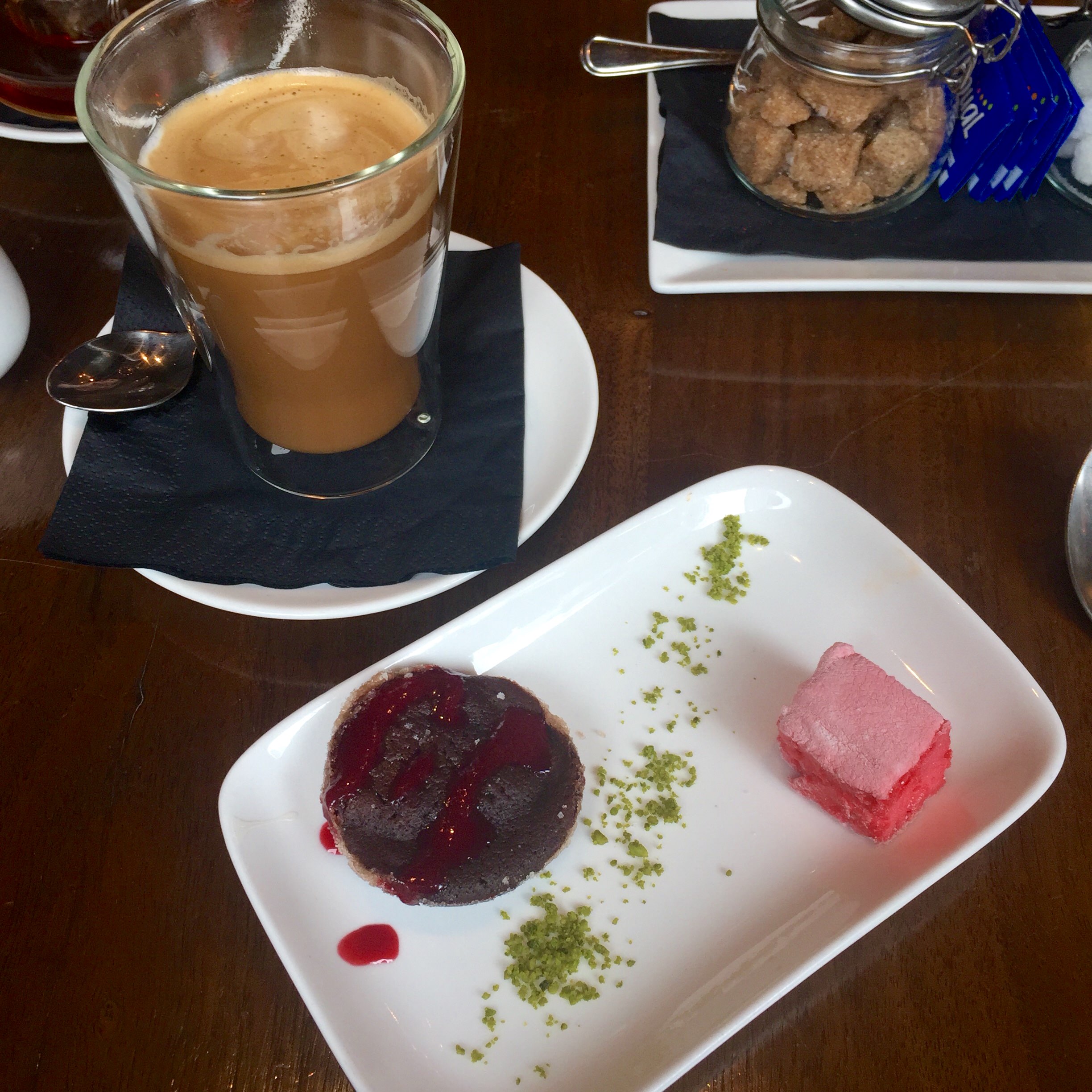 Overall, I wouldn't necessarily recommend heading over to Lily & Bloom for their Weekday Lunch Bazaar. Even though it is priced reasonably for the location and the amount of food you get, the quality of the food is really lacking. If the food was as good as their service, I would definitely head back, but I think for now, I'd give their buffet lunch a pass.