New space and concept, but the same authenticity and hospitality at the recently refurbished Ta-ke in Causeway Bay

For those who remember Sushi Ta-ke from its previous Cubus location for its fresh ingredients and refined omakase offerings, you will be pleasantly surprised by the restaurant’s makeover and new location. Now at Lee Garden Two and ready to kick back in the scene with a new name, Ta-ke is more determined than ever to bring its exceptional Japanese gourmet experience to Hong Kong.

The swanky new pad is inspired by the Japanese courtyards of 17th-century Edo-period architecture, exuding a sense of tranquility, simplicity, natural beauty and zen.

Ta-ke now brings the omakase experience a notch higher, with guests not only enjoying the eatery’s usual sublime sushi and sashimi creations, but also teppanyaki and tempura dishes at a separate station. And you know you are in good hands for dinner when the restaurant’s culinary direction is led by three top Japanese chefs: Masakazu Ishibashi, Hara Eisaku and Suzuki Masahiro.

I thoroughly enjoyed watching Chef Suzuki in his zone, showcasing his swift, magical knife skills at the sushi and sashimi station. You can tell just how fresh the ingredients are when you taste them in their rawest form. Our first course, botan shrimp with egg yolk, soy sauce and caviar, started our meal on a beautiful note, with the raw shrimp’s sweetness harmonising with the creaminess of the egg-yolk marinade. 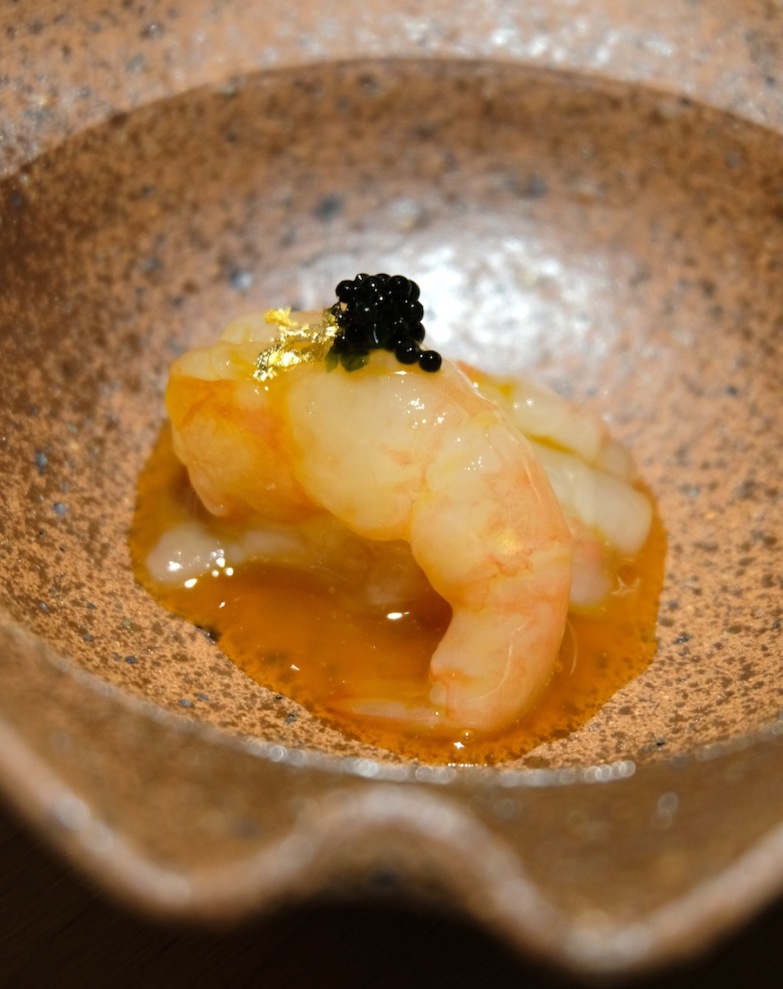 Unlike the usual otoro (fatty tuna) served fresh and unseasoned, Ta-ke’s smoked fatty tuna was carefully prepared and processed. After being cut, the slices were left to rest for 10 days in order to soften the fish, and then the flavours were further enhanced by being smoked in bamboo. 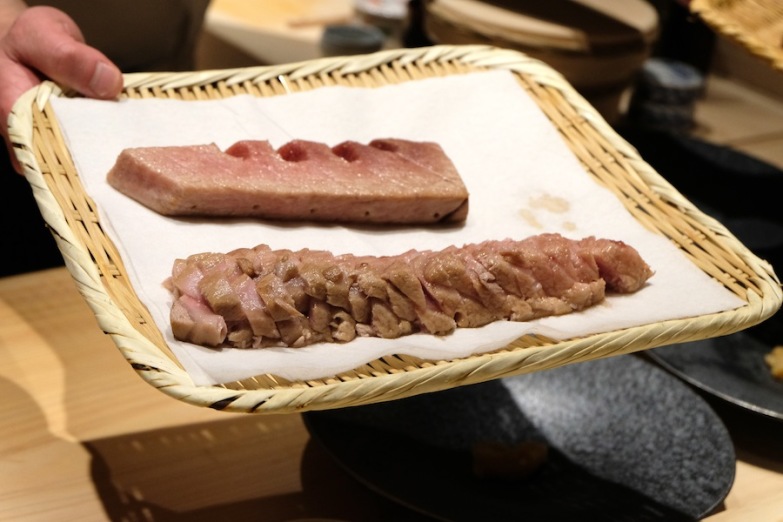 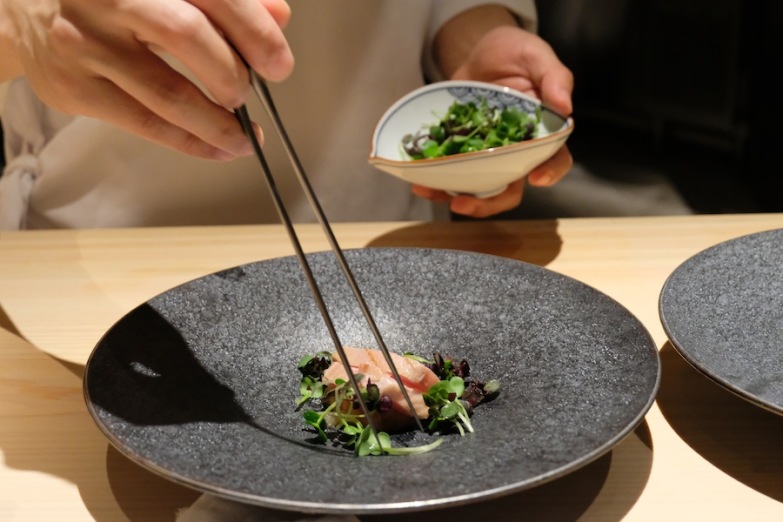 One dish that really stuck me was the sea urchin rice with shirako, truffle and salmon roe. In Japanese, shirako literally translates to “white children” – aka the milt of a male cod and, in this instance, fugu (the Japanese pufferfish). It was my first time eating fugu, and I had to eat its children too! Sounds a little morbid, but it sure was tasty.

The Japanese really pay attention to the finest details, even down to providing you with a tiny, wet towel to cleanse your fingers before you lay them on those warm rice grains... 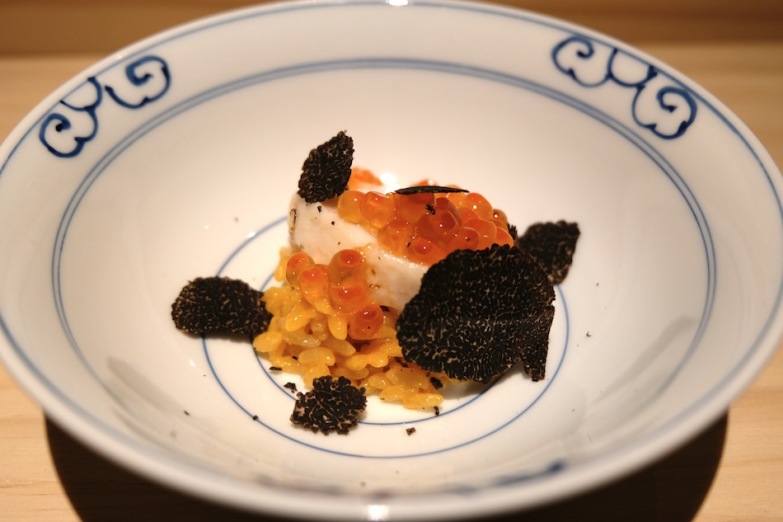 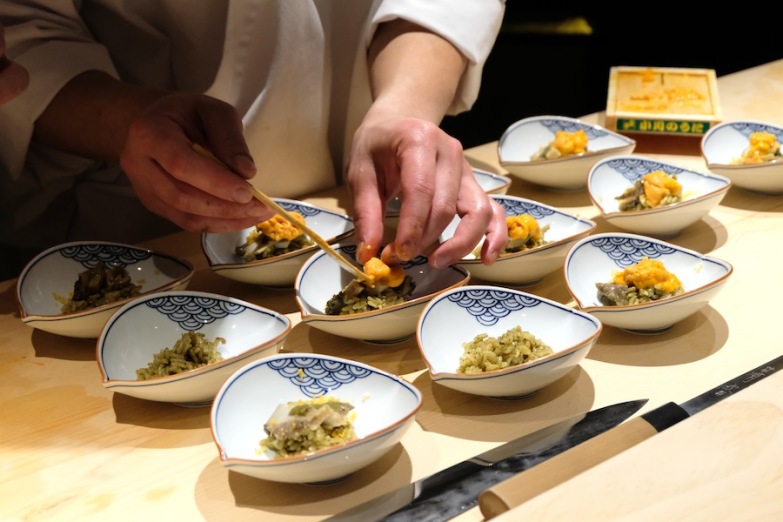 After what seemed like endless courses of sushi and sashimi, we were ushered to another section of the restaurant for some teppanyaki and tempura.

While I was expecting to catch some major grease action, Chef Hara made tempura frying look like a delicate form of art. He treated each ingredient with so much respect, whether was it just a simple piece of aubergine or premium seafood. Hardly any dipping sauces were provided, unlike at other tempura spots around town, but the freshness of each ingredient was brought out in the golden, lightly fried batter.

Up at the teppanyaki grill was local chef Lam Ching Pang, who has over 20 years of experience in teppanyaki and was formerly at Inakaya and Kani-ya Teppan Yaki. It was my first time experiencing teppanyaki during an omakase meal, and boy, was I glad that it was part of my dinner. The perfectly grilled Spanish red prawn with Inaniwa udon was incredibly juicy. Chef Lam had specially seared the prawn head so that guests could enjoy its umami-ness along with the udon. 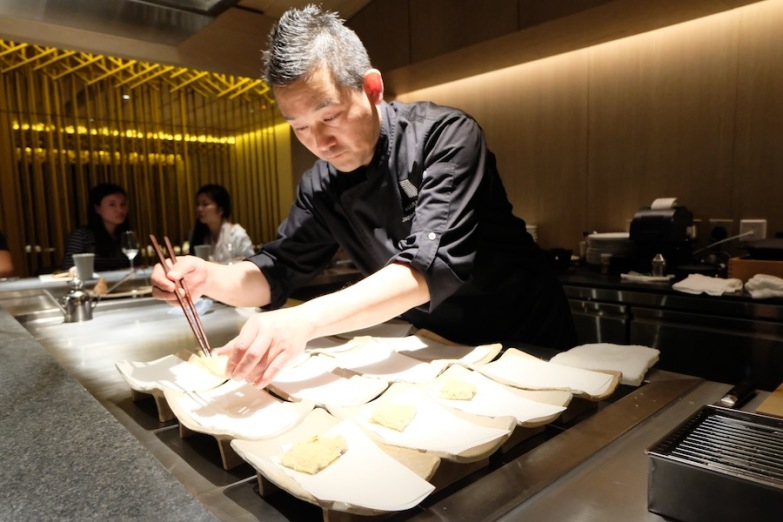 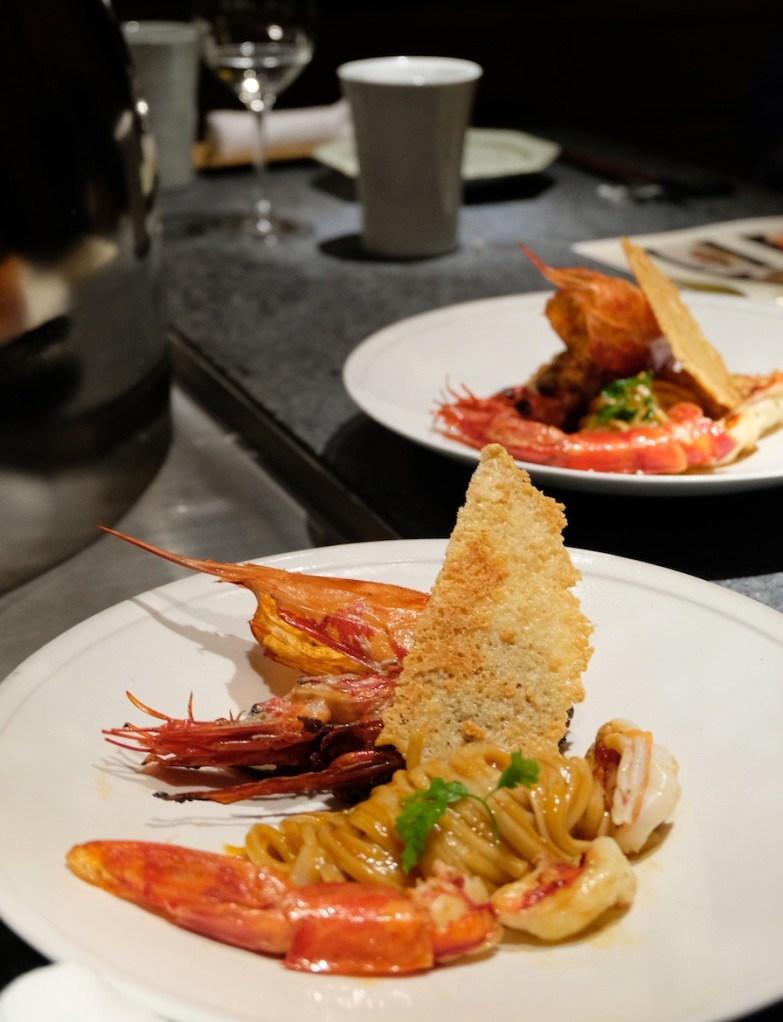 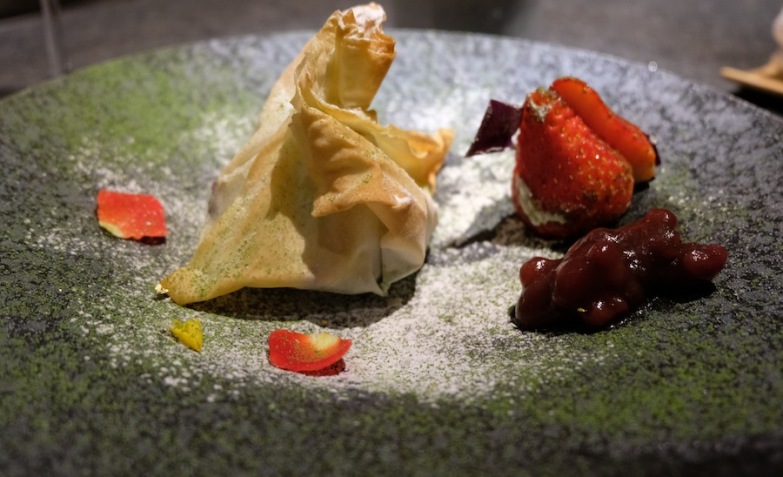 If you are at the point in your life where you just to want splurge on an exceptional meal that is a treat for your soul, do it at Ta-ke. Despite an exorbitant price tag, you can be sure that a lot of thought has gone into each perfectly crafted dish and that the freshest and finest ingredients have been used.