Where to celebrate Independence Day in Hong Kong this Summer 2017

Even though the 4th of July is not an official public holiday in Hong Kong, who says we can’t party like it is? We’ve rounded up a number of the best places for you to go all out this Independence Day – and celebrate the best way you can: with food, booze and more food. 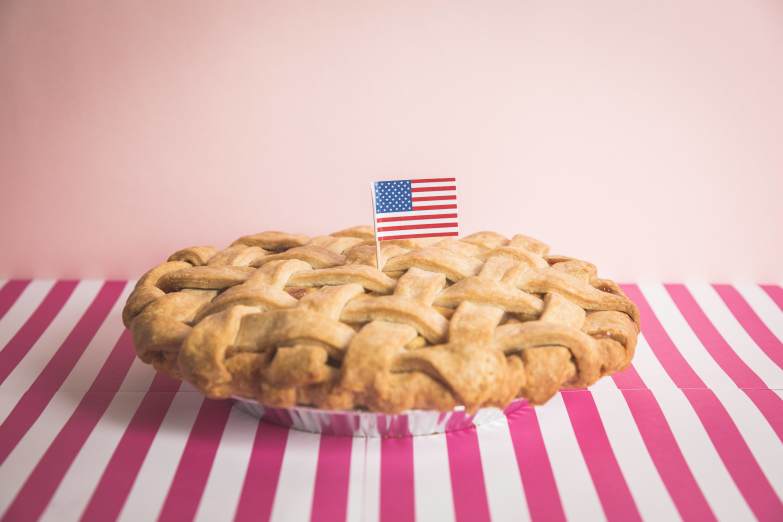 Apple pie lovers, this one’s for you. Classic American diner-themed restaurant Burger Circus will be apple pie heaven until the 4th of July. Enjoy the sweet taste of home with freshly baked apple pie by the slice ($78),made with organic apples and a touch of lemon zest and cinnamon. Or if you're feeling adventurous, try an apple pie milkshake ($78), which would certainly hit the spot on a steamy summer day. You can also pre-order a full-size, nine-inch apple pie ($288). Order up to 48 hours in advance and choose to pick up your pie at Burger Circus or have it delivered to you on the 4th. Simply place your order through info@burgercircus.com or phone 2878 7787. 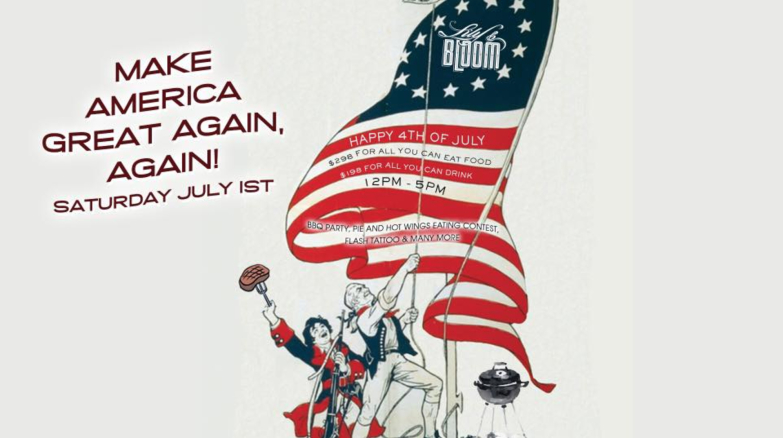 Here’s another reason to love Lily & Bloom. On Saturday, 1 July from noon until 5pm, Lily & Bloom will host its Make America Great Again, Again National Day party, with a traditional American buffet selection of steaks, burgers, fries…you name it. And if the buffet doesn’t fill you up, there's also the chance to enter their pie and hot wings eating contests (2pm and 4pm), along with a Trump costume showdown as well as flash tattoos, giant Jenga and cupcake-making stations that would be perfect for the kids. Ticket prices are $298 for all-you-can eat food, $198 for free-flow drinks and $198 for kids (7–12 years old). Call 2810 6166 or email info@lily-bloom.com for tickets.

Fortunately, Lily & Bloom have not forgotten about the actual 4th of July itself, which falls on one of their famous Oyster Tuesdays (6–11pm). If you aren’t aware of Oyster Tuesdays, let me fill you in: 12 oysters, unlimited mussels and prawn cocktail and one main course – all for $490 per person. For an additional $120, you can add unlimited oysters to that deal. In honour of the 4th of July, the main courses are limited to classic American BBQ dishes, including slow-braised short ribs, the Bloom burger with dry-aged Wagyu beef, truffle aioli, bacon and aged Cheddar and a variety of steaks. 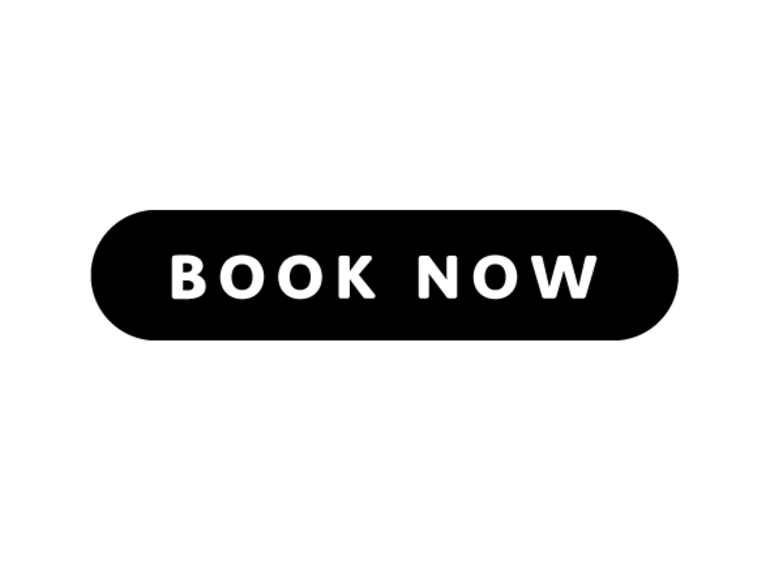 The Butchers Club Burger is back with its 4th of July Block Party (6–11pm), showcasing all-American food and drink such as classic American beers ($15 each), burgers and wings. Make your way over after work for the celebration, to relax and experience a summer backyard get-together mixed with a hint of a college party vibe, with games such as beer pong, flip cup and a mini-tailgating party. 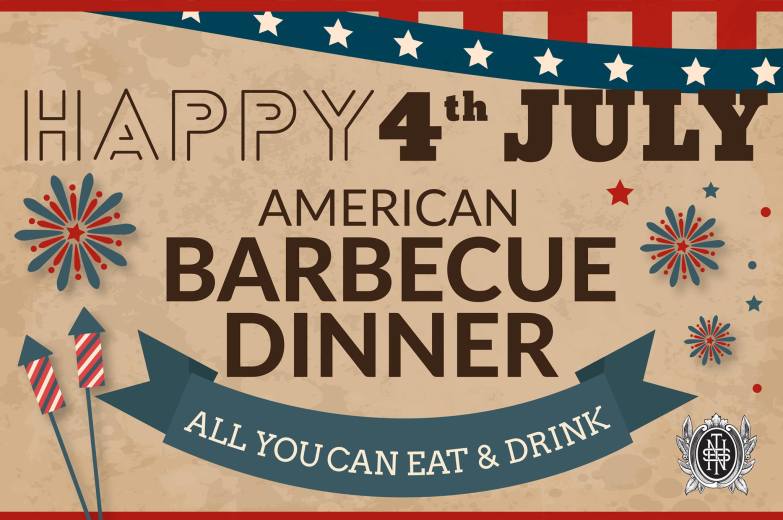 Our four favourite words: all you can eat. And of course let’s not forget: all you can drink. On Saturday, 1 July from noon until 5pm, Stone Nullah Tavern’s red, white and blue barbecue party will be serving pretty much all the classic American food you can think of, including ribs, mac 'n' cheese, hot dogs, burgers, apple pie and much more, all for $299/person, created by Executive Chef Vinny Lauria, who hails from the Big Apple. Free-flow drinks ($199 per head) include Lynchburg Lemonade, two types of homemade wine coolers, Pabst Blue Ribbon and red and white wines. Adding to the excitement will be music by DJ Mic McGirk, who will be spinnin' a combination of American rock and hip-hop tunes. Also be on the lookout for games, contests and activities throughout the day. Remember to buy your tickets in advance to be a part of the festivities by calling 3182 0128 or emailing info@stonenullahtavern.com.

What’s even better is that on the 4th of July from 6–11pm, the same deal applies, with unlimited food for $299/person and free-flow drinks at $199 extra. Two times the party, two times the fun. 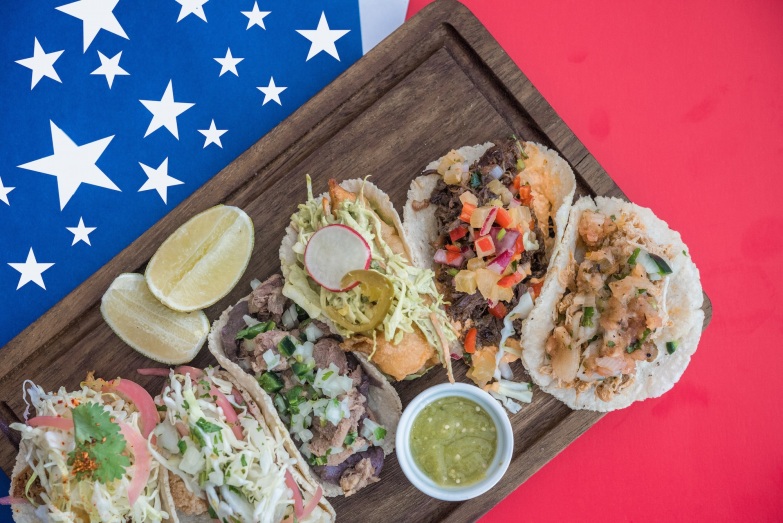 Taco Tuesdays are a pretty big deal at sassy SoCal eatery Commissary, and with the next one falling on the 4th from 6pm until midnight, this one's going to be bigger and better than ever. On any regular Taco Tuesday, you can get tacos for $50 (the more you buy, the less you pay!), happy hour drinks till 8:30pm and pisco sours for just $30 all night. The Independence Day edition will have its own perks, showcasing St Louis ribs, served with sides of coleslaw, grilled corn and soft rolls (half-rack + 2 beers for $250; full rack + 4 beers for $450). This rib-and-beer special will be available until Sunday, 9 July, so be make sure to make the most of it!