Why is everybody going all caps?

Has anyone noticed that restaurant names are being shouted at us all of a sudden?

Newcomers on the scene – all opening this side of 2018, like FUMI, FU RONG and FRANCIS – have jumped out of the starting gates with a holler, a bellow and a roar. We might be debating whether to go to MEATS, MARKET S.E.A, BELON, JUNON, CÉ LA VI or more seasoned uppercasers such as AMMO, MANA! and SEVVA.

As fully uppercase letters are more tightly packed together, they’re commonly used to indicate YELLING or anger, which isn’t generally something we want to portray in our articles. It definitely does make the words, and therefore the brand, stand out, but what if all new restaurants decide to take on this imperious capitalisation?

We might not even have noticed, as restaurant logos come in all forms – upper, lower and everywhere in between – were it not for the numerous emails from restaurants (and the public relations teams behind them) asking that we amend names in our publication and online platform from our usual title case to all caps. We tend to be an obliging sort and previously had no issue writing NOMA, NOBU or SPOON, as our house style is to use standard English with the exception of writing brand names as the company does. But now that the trend is getting more popular, our articles are filling up with block capital restaurant names, and it’s particularly distracting when we need to refer to them multiple times in a paragraph, taking on a domineering presence on the page.

The Telegraph reported an incidence of a New Zealand office worker getting the sack just for writing emails in full caps after colleagues griped that her writing was too ”shouty“ and confrontational. We‘re not talking about full sentences in caps here, only single-word restaurant names, but it does highlight the high level of annoyance people experience with uppercase text.

We checked in with some experts to figure out why the rise from lowercase to uppercase is taking over. Dan Rhatigan, senior manager of Adobe Type, said, ”Choosing the casing (all caps, upper and lowercase, all lowercase, tricky mid-word caps) for a brand name is an interesting part of the design palette, because it’s something that can reinforce, regardless of how anyone uses a typeface to set the name. It’s a typographic rule of thumb that text set in all caps can be tricky for running text or can feel like the writer is shouting at the reader. However, there are a number of compelling reasons to use caps for display purposes such as with names or short phrases. For one thing, a name or phrase set in all caps forms a more orderly rectangular shape than mixed case: all the letters are approximately the same size, without details that extend above or below the rest. These rectangular word shapes are easier to stack, set vertically or fill up the area of a sign. Yes, they can sometimes feel shouty, but the tone of that shout can be altered with the actual typeface used for the name. Caps can also feel very formal and stately, especially if set with more delicate typefaces. This is a tone that harkens back to the formal inscriptions of ancient Rome or the cool, crisp modernity of brands like Shake Shack.”

Nora D Richardson wrote an article for Spot-On Branding, stating, “When we read, we recognise words by their shapes. SO, WHEN YOU SET YOUR WORDS IN ALL CAPS, IT’S THE LEAST LEGIBLE OPTION, NO MATTER WHICH TYPEFACE YOU USE (plus, you look really rude in the realm of social media).”

So it seems that it’s not just obnoxious to the eye but actually harder to read, as the lack of ascenders and descenders on each letter makes words more difficult to quickly identify. Renowned expert on the subject Miles Tinker wrote in his book Legibility of Print, ”Considering the evidence that all-capital printing retards speed of reading to a striking degree in comparison with lowercase and is not liked by readers, it would seem wise to eliminate such printing whenever rapid reading and consumer (reader) views are of importance. Examples of this would include any continuous reading material, posters, bus cards, billboards, magazine advertising copy, headings in books, business forms and records, titles of articles, books and book chapters and newspaper headlines.”

Designer Dave Cassells of Studio Cassells argued that while his own logo is uppercase, it’s not meant to transfer into regular written usage as capitalised. His take on the trend of restaurants insisting their name be spelled uppercase in every reference is as an easy (and lazy) way of making a word into a logo without actually using the logo. 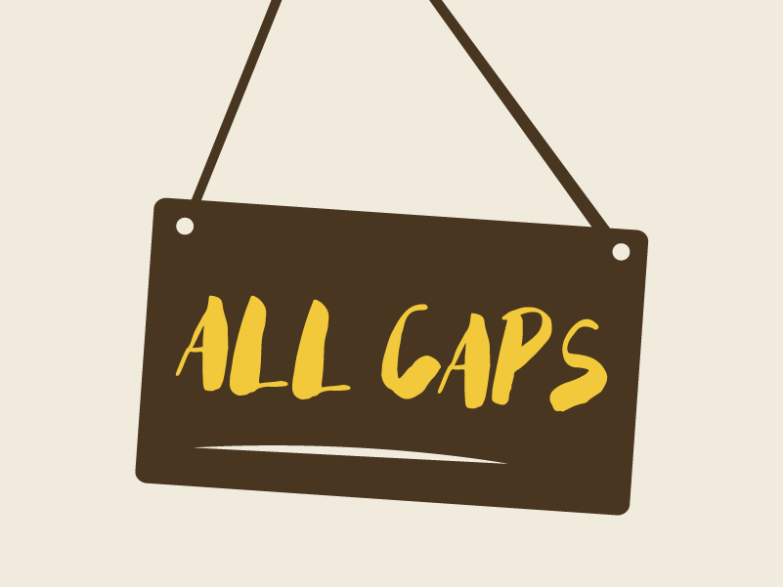 We asked the restaurants themselves why they’ve decided on block caps. James Ward said of his new Israeli street food restaurant FRANCIS, named for the street in Wanchai where it is located, ”When we began the project, we decided to keep it very minimal and understated from a design and branding perspective – the idea being that it complemented the unpretentious service and approach to wines, honest food and the vibe. No logo, simply a bespoke typography, but in black caps for impact.”

Manuel Palacio Ramos, co-founder of Pirata Group, said, ”MEATS is all capital letters because we wanted to make a bold statement – we just serve meat!”

Similarly, the folks at CÉ LA VI explained they went exclusively all caps for design reasons, to give the logo stronger resonance.

Bonnae Gokson, who has just celebrated the10th anniversary of her acclaimed restaurant SEVVA, and has arguably earned her uppercase status, said, “Seva in Sanskrit means to honour and to serve the highest of self and drop all ego. I have had much teachings from my meditation master and thought this would be the perfect word for my business. We added another ‘V’ just as a wordplay, and it sounds exactly like ‘savour’... perfect for us! Why not in caps? It’s a nice graphic, no?”

NOBU, with restaurants across the globe, also seems pretty justified in the commanding typeface, but interestingly, when we checked in with them, they revealed that it’s only the Hong Kong restaurant that prints its literature in all caps – and this is currently somewhat moot as it’s due to close next year for refurbishment.

Christopher Mark, co-founder of Black Sheep Restaurants, runs eateries like Ho Lee Fook, Carbone and Motorino – but also BELON. So why the all caps for this fine French? ”It was our designer who put it forward for the visual element.” This brings us to point out the peculiarity of the name of another of Black Sheep’s eateries: the exclamation mark in La Vache! We are always enthusiastic about going there, but is the fervour forced by the eagerly punctuated moniker? Mark told us that La Vache! was deemed exclamatory for the double meaning behind the cheeky name for a steak frites joint, and they wanted to emphasise the playfulness of the French phrase oh la vache! (holy cow).

The beloved pioneering zero waste café MANA! has gone for both capitals and punctuation. We asked founder, Bobsy Gaia, to comment, ”It’s good to be asked about such matters from time to time as there is a lot of thought and integrity behind our brand and names of our foods: MANA!Love, MANA!Ste, MANA!Flow, etc. Although usually spelled with two ‘n’s’, manna traditionally comes out of the Bible and means ‘food from heaven’, literally food coming down from up on high above. MANA! in our case, spelled in capitals with one ‘N’ and the exclamation mark, originally meant bread or sacred bread, and our flatbreads, being the heart of our offering and concept, flowed well. ‘MA’ is also the root of the word ‘mother’ in all languages, and MANA! is quite a feminine concept and business, so that was beautifully fitting. Why the capital letters and exclamation mark? In short because all three key aspects above create a strong and unique brand identity. The exclamation mark is to add emphasis and urgency to what we advocate: diet change, not climate change.“

Going the opposite way is new eco-friendly LKF café the study, which is hard to make stand out in print, but also seems to fit their brand of quiet, of-the-people, community-focused approachability. Founder Jayne Law explained, ”It’s actually that I just wanted people to get a feeling that the place is supposed to be relaxing and comfortable – no need to be so formal.”

An article in the Los Angeles Times back in 2000 showed that many restaurants in the States were going fully lowercase with their restaurant names, a trend the newspaper was embracing as long as it didn’t pivot into the uppercasing of all letters, which they deemed provided an inappropriate visual emphasis. A decade later, it seemed the trend in the US evolved to removing the vowels from restaurant names. According to The Washington Post in 2009, eateries were dubbed things like SKWR, STK and GRK (Skewer, Steak and Greek), which thankfully doesn’t seem to have branched out of the States or past the noughties.

Here in Hong Kong, we have a number of acronyms that seem to work well when they’re fluidly pronounceable. There’s VEA, which makes sense because its an acronym for Vicky et Anthony – the chef and mixologist founders. FINDS is also in the clear because it’s an acronym for all the countries it represents (Finland, Iceland, Norway, Denmark, Sweden), and it also just happens to be a handy word. And then there’s the questionably named WTF, although it’s not questionable for the reason you might be thinking – it stands for Worth the Fuss and is more text speak and seems a somewhat short-sighted moniker that will quickly fall out of fashion (if it was ever in).

But it’s not just happening in Hong Kong – there’s international capitalisation going on too. It seems the UK is also experiencing a flux of uppercase eateries: there’s COYA, HIPCHIPS, EDWINS, NOPI, OPSO, SMOKESTAK, BEAST, MEATliquor and DUM Biryani House in London and Aberdeen’s MAGGIE’S GRILL. And then there’s St JOHN, London’s favourite for nose-to-tail cuisine by famed chef Fergus Henderson where only the JOHN has gone all caps.

Acclaimed Spanish restaurant elBulli’s name has something to do with the restaurant’s landowner’s French bulldogs, but that obscurity still doesn’t explain the strange majuscule in the middle. In Spain they do have different rules for capitalisation, but they keep uppercase at the beginning of a sentence, not explaining the peculiarity of a lowercase start with a capital in the middle. Perhaps the elBulli creators agreed with the character in John Green’s Paper Towns who thought, “The rules of capitalisation are so unfair to words in the middle of a sentence.”

Upper, lower – does the vibe change with the typeface or is it all the same to you as long as the food’s good? It’s been a tough couple of years for the restaurant biz, so maybe hollering in capitals is what they need to do to endure in today’s restaurant industry.

We think MANA! has made a solid case for their capitals, and their “eat like it matters“ philosophy deserves to be enthusiastically shouted from the rooftops. As for the others… we’ll have to chew them over as emphatic FOOD FOR THOUGHT. 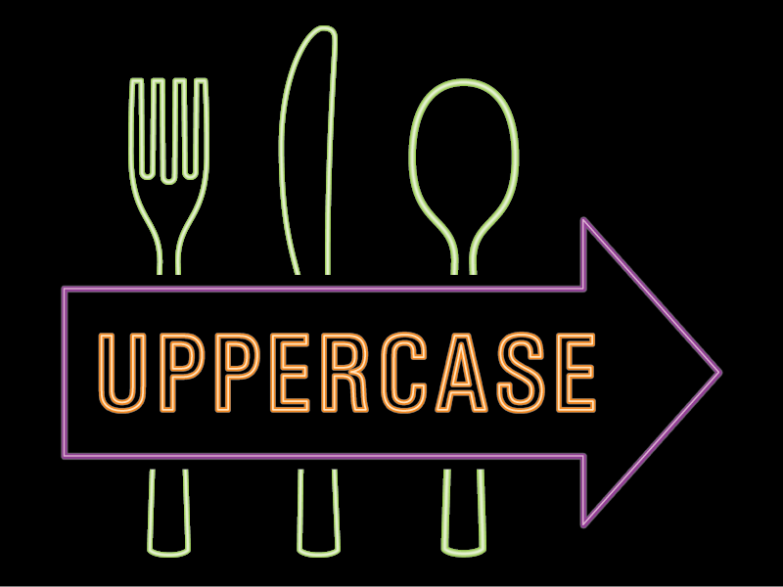