Those who walk by Brut! may think that the restaurant looks too easy-going for its own good. The interior is dim and candlelit, the wine list is charmingly written on a wall with marker and the sharing-plate menu takes a something-for-everybody approach. But while Brut! appears minimalistic and unassuming, the carefree illusion goes beyond these first impressions.

The space itself is intimate, and the relationship the staff creates with each guest adds to the sense of intimacy. Camille Glass, the owner, floats around the space serving and talking to each guest, while George Kwok, her business partner and co-executive chef, pops in and out of the kitchen.

Since Brut’s soft opening, they have been mistaken as a Spanish wine bar owing to the sharing plates revolving around Ibérico pork, but the restaurant actually has a farm-to-table concept.

I’ve never seen a kitchen so open to experimenting with vegetables. Take the mozzarella di buffala, watermelon and citrus ($128). The lemon-coriander dressing added complexity to the mozzarella dish. Traces of olive tapenade amped up the salad’s flavour. This dish was delicate and transportive, evoking memories of summertime. 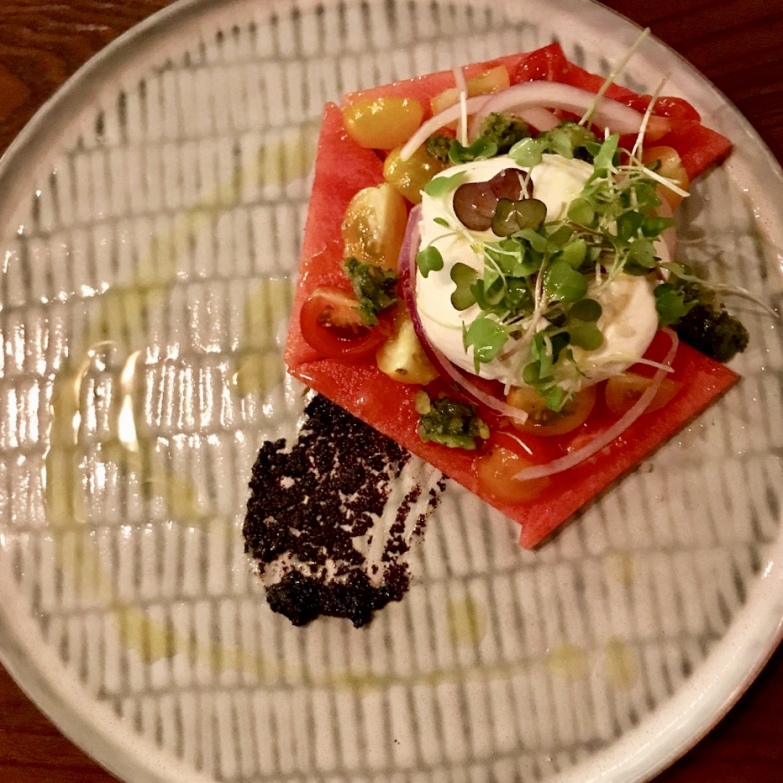 With The Carrot 2.0 ($68), the carrot was naturally purple in colour and the peel was fried to add some crunch. Goat cheese imported from Spain was sprinkled on top. A veggie triumph! 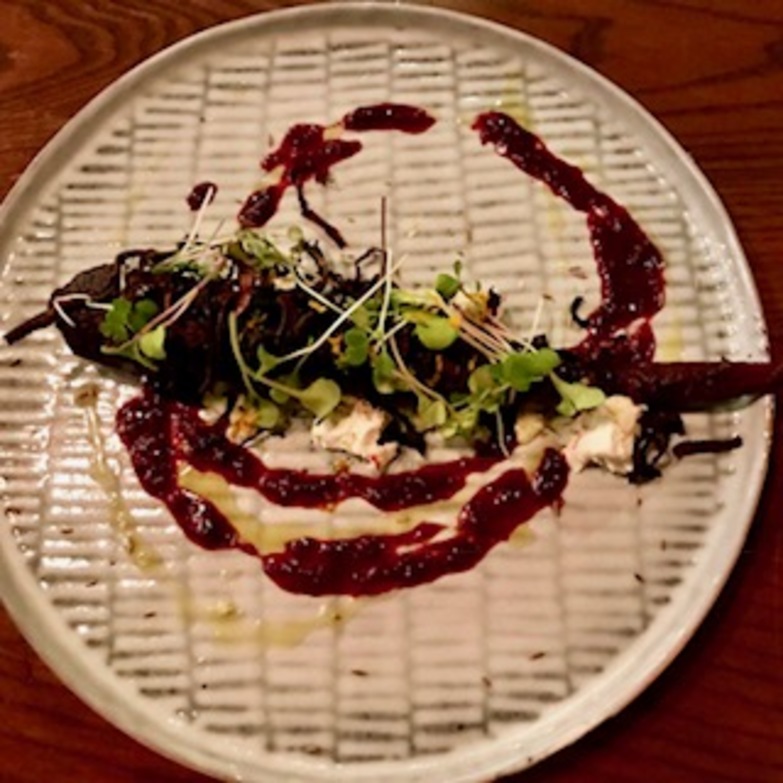 The restaurant has a keen sense for contrasting textures, seen in the daily special of miso eggplant ($78), which was fun to eat. The aubergine was grilled and laid on top of a splattered-effect dish using miso paste. The umami flavours were brought to the forefront, complemented by both creamy and crunchy textures. 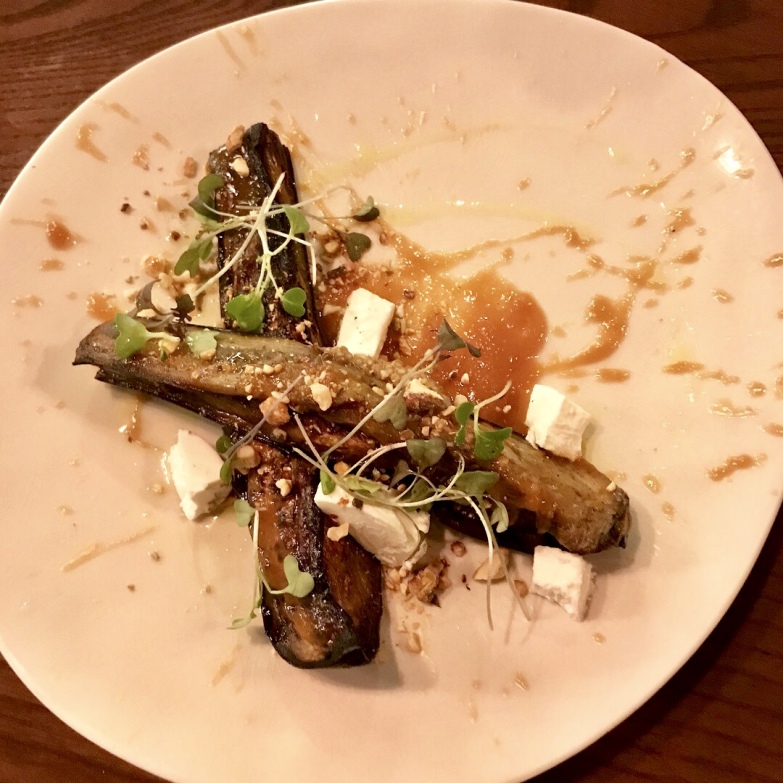 Moving to the meats, the popular baby buns of the day ($28 each) consisted of Peruvian-style pulled chicken and house-made pickled red onion and cucumber, all packed in a toasted brioche bun – the ultimate comfort-food dish. 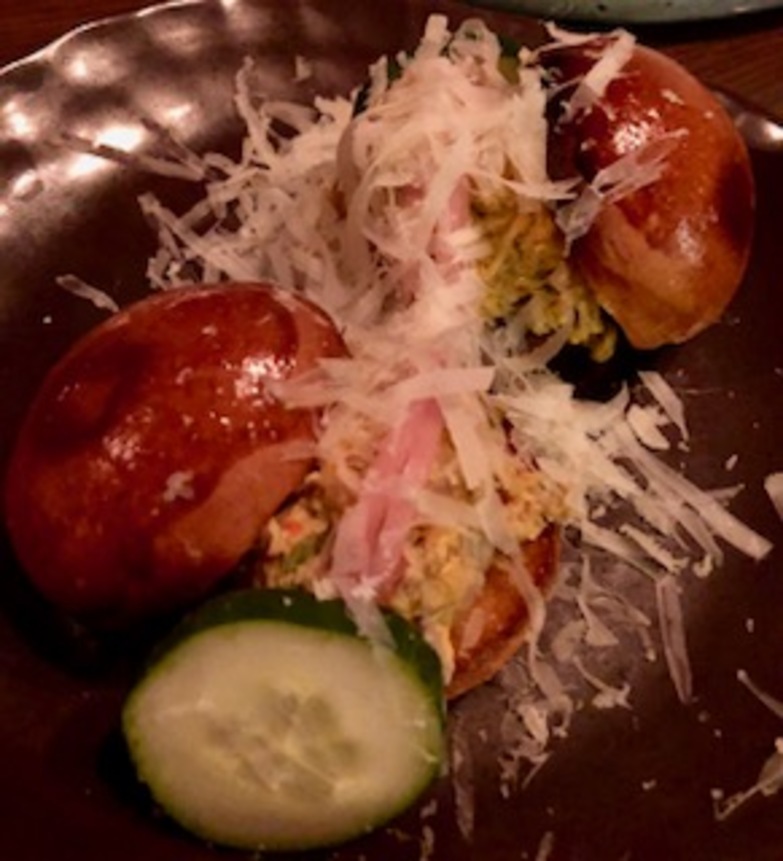 Nothing at Brut made my head swivel like the Ibérico pork shoulder ($228) and the octopus, prawn and piquillo hummus ($128). The incorporation of piquillo peppers in both gave a distinct kick to these hearty dishes.

The Ibérico pork, a speciality at Brut!, was cooked to medium, with a crisp exterior and tender flesh. Delicately scalloped potatoes were layered underneath. The piquillo sauce was rich, with a sweet, tart taste, well balanced by the buttery potato.

For the hummus, thin pieces of toasted bread were intricately plated with octopus and fresh grilled shrimp over a swirl of hummus. Pops of colour from the cucumber and sprouts created the ideal farm-to-table dish that was creative, fresh and robust in flavour. 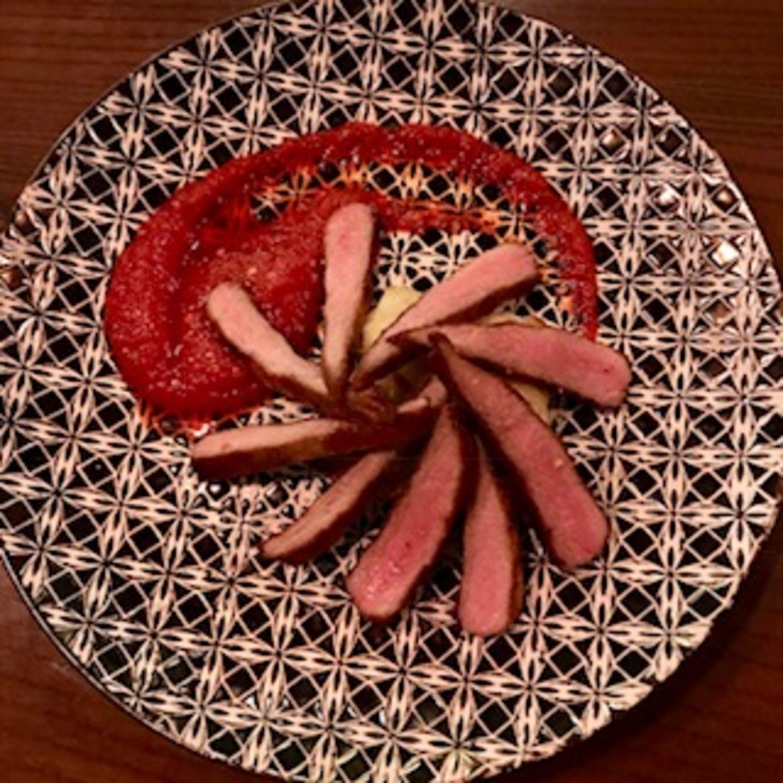 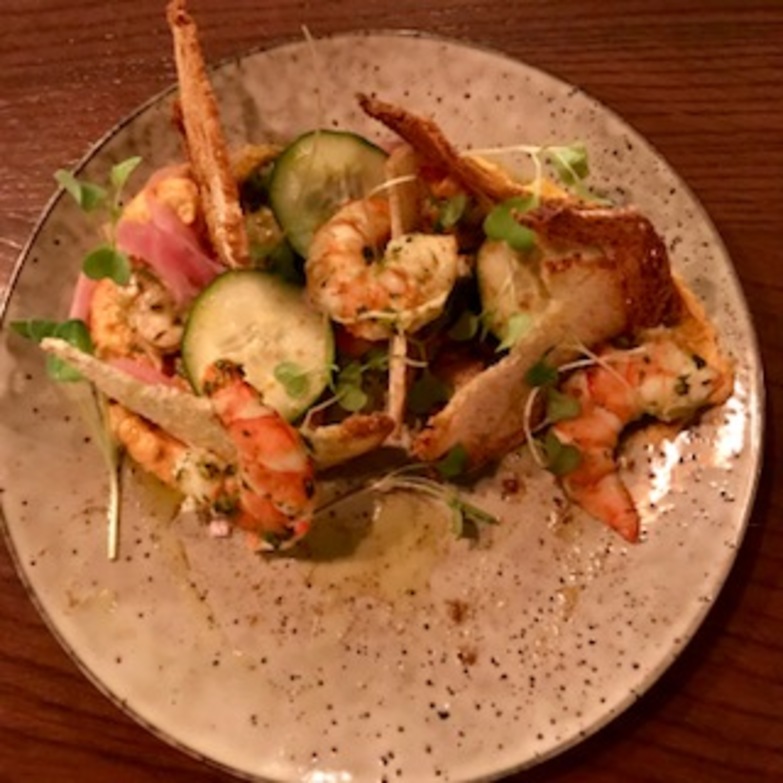 The rest of Brut!’s menu isn’t devoted to desserts but, instead, to ham and cheeseboards. The daily dessert ($48) was simple and pleasant. A vanilla panna cotta with cookie crumbs and orange blossom ended our meal with something light and delectable. 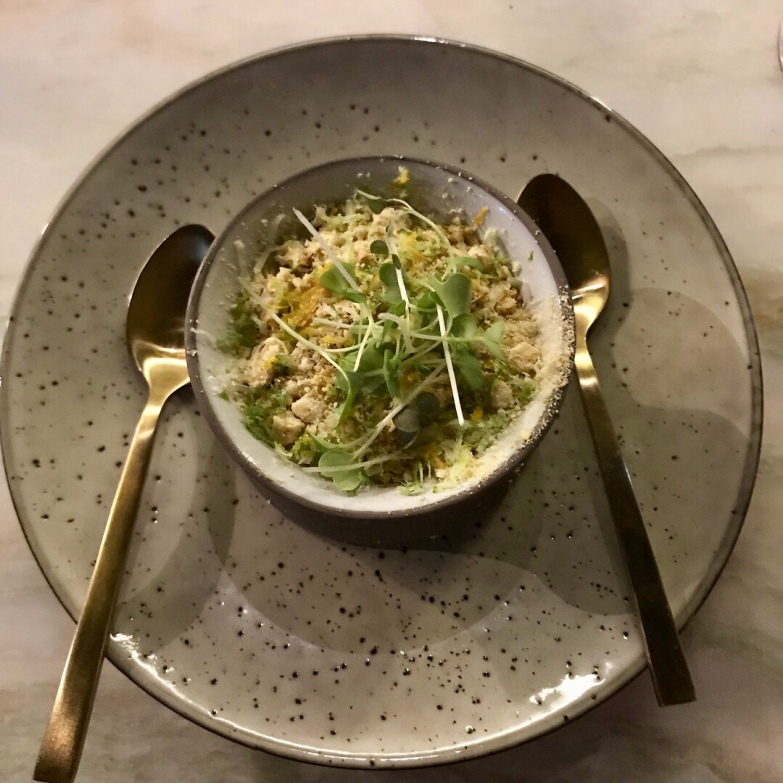 Most guests won’t be able to immediately recognise the labels, because they’re sourced from small, up-and-coming producers. Each bottle is unique, embodying a different flavour and character. The concept behind Brut!’s collection is nostalgia, evoking a memory rather than a wine brand.

The light, zesty rosé cocktail ($98) was first served by Camille to refresh after the end of a long workday. Rosé vermouth was infused with Sichuan pepper liqueur, with Fever-Tree tonic adding a citrus kick. The mild Sichuan pepper gave the cocktail a floral finish. 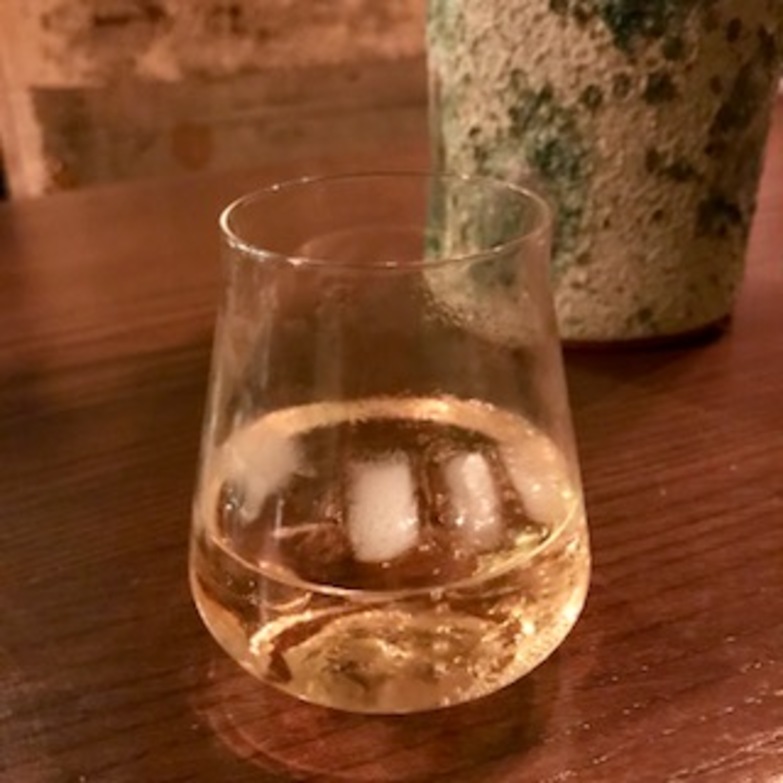 Within the reds, the Sobon Estate Rocky Top Zinfandel 2015 ($108/glass) was my favourite. The light-medium ruby-red wine had both fruity and savoury elements, leaving a smooth, mellow aftertaste. 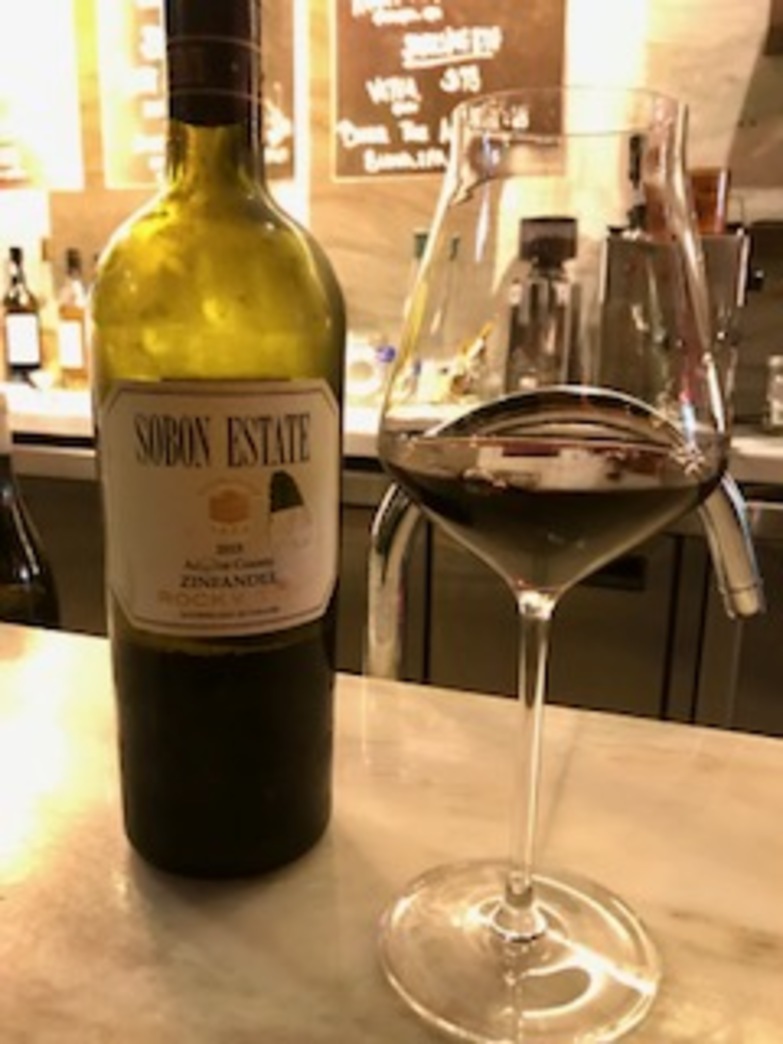 The white wine we sipped, BLANKbottle’s Moment of Silence ($96/glass), was a Chenin Blanc, Chardonnay and Viognier blend. This bottle is one of the most sought-after South African wines on the market and is bold, complex and nutty. 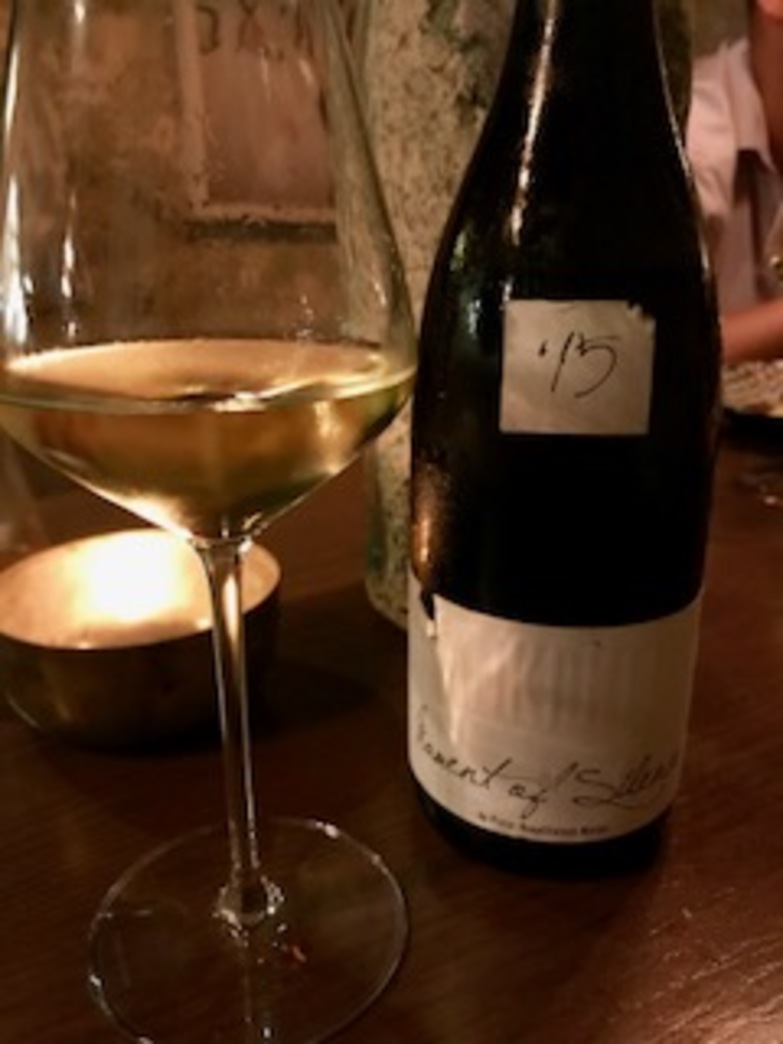 Brut! is one of the only places in Hong Kong that serves orange wine. Orange wine is my absolute favourite – the skin stays in contact with the fruit, giving the wine an amber hue, and it reminds me of autumn every time a glass is poured.

Luckily enough, we tried a new orange wine that may soon be added to Brut!’s menu. The Craven Clairette Blanche 2015 ($110/glass) was crisp, clean and light. Notes of green apple and lime created a clean, slightly tart aftertaste. 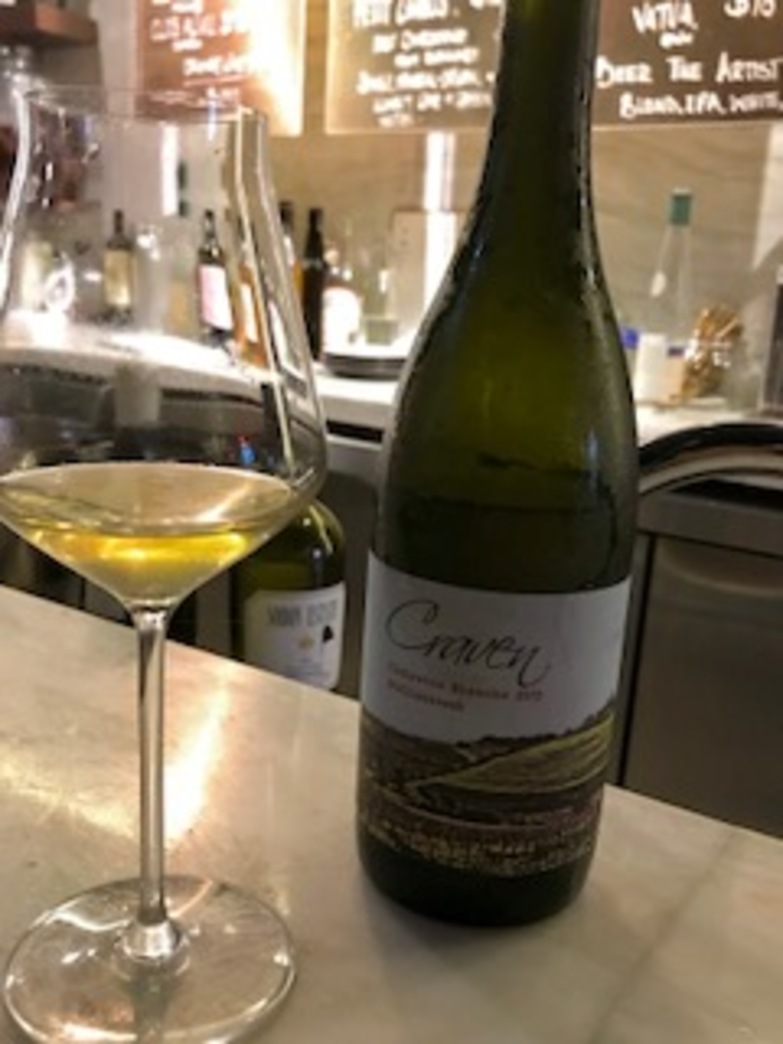 Very few restaurants and wine bars are as interesting as Brut!, and there are solid reasons why a reservation for dinner should be made here at the weekend. The unpretentious wine list is memorable and the food, which goes beyond being an added attraction while drinking, is experimental and flawlessly executed.