We rate this as the best teppanyaki in town

Since its opening in 2011, Sushi Ta-ke (now just Ta-ke) has risen to the top of the list of premium sushi experiences for Hong Kong’s Japanese-food connoisseurs. This March, the small, intimate Causeway Bay restaurant at Cubus expanded to a goliath 6,000- square-foot space at Lee Garden Two.

Opened by 1957 & Co, the group behind restaurants like Gonpachi, Paper Moon, An Nam, Mango Tree, 10 Shanghai and Modern Shanghai, Ta-ke offers exquisite fine-dining experiences across the broad spectrum of Japanese cuisine, ranging from teppanyaki, to tempura, to sushi.

Walking into the palatial venue somehow still feels intimate; a surreal “bamboo forest” designed by architect Kengo Kuma offers a narrative of the various dining areas in addition to providing privacy for diners. The design of the restaurant, with its natural wood tones and dark stone finishes, transports diners to the courtyards of the Edo period of Japan.

On our visit, we decided to sit down at the teppanyaki counter of Chef Lam Ching Pang. This affable chef has over 20 years of experience working at notable Japanese restaurants including Inakaya and Kani-ya Teppan Yaki. 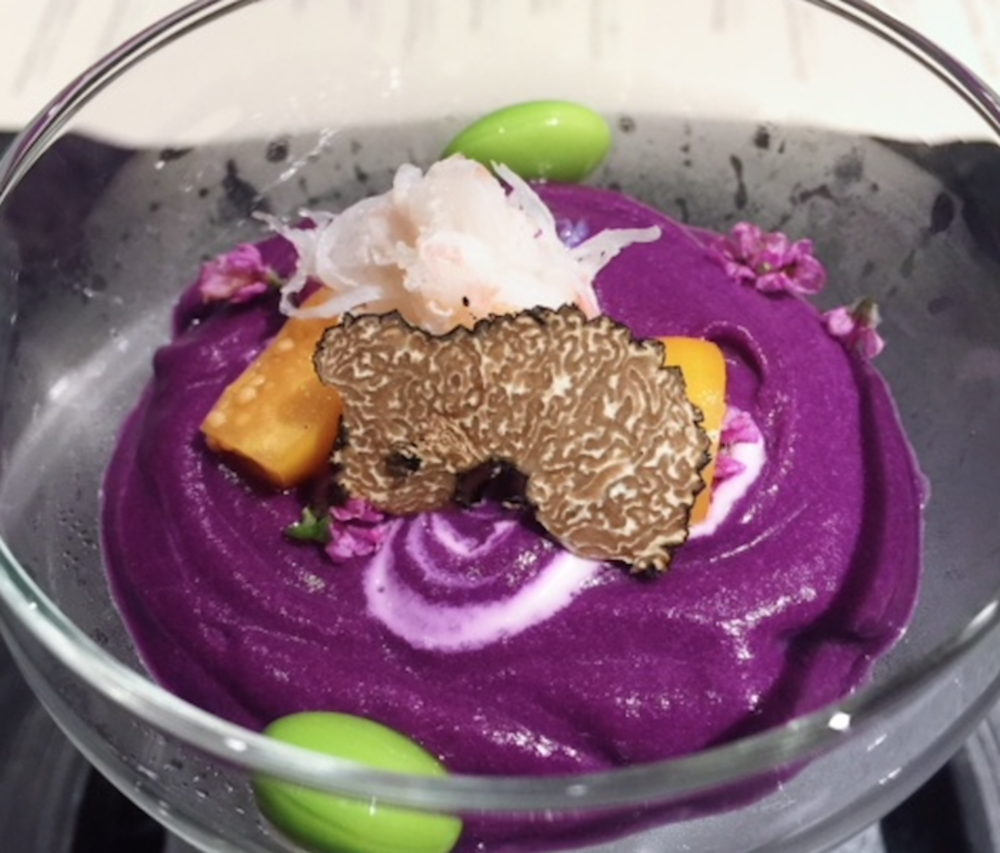 There were two of us at dinner, so we decided to try two of the tasting menus: Matsu ($1,380) and the signature Ta-Ke ($1,680). Both sets started with a Okinawan purple potato cold soup, topped with edamame, gooseberry, shiso flower, crabmeat and black truffle. The texture of the potato was more purée than soup, but it was deliciously creamy and flavourful. The sweet creaminess of the potato was further accentuated by the crab and gooseberry. 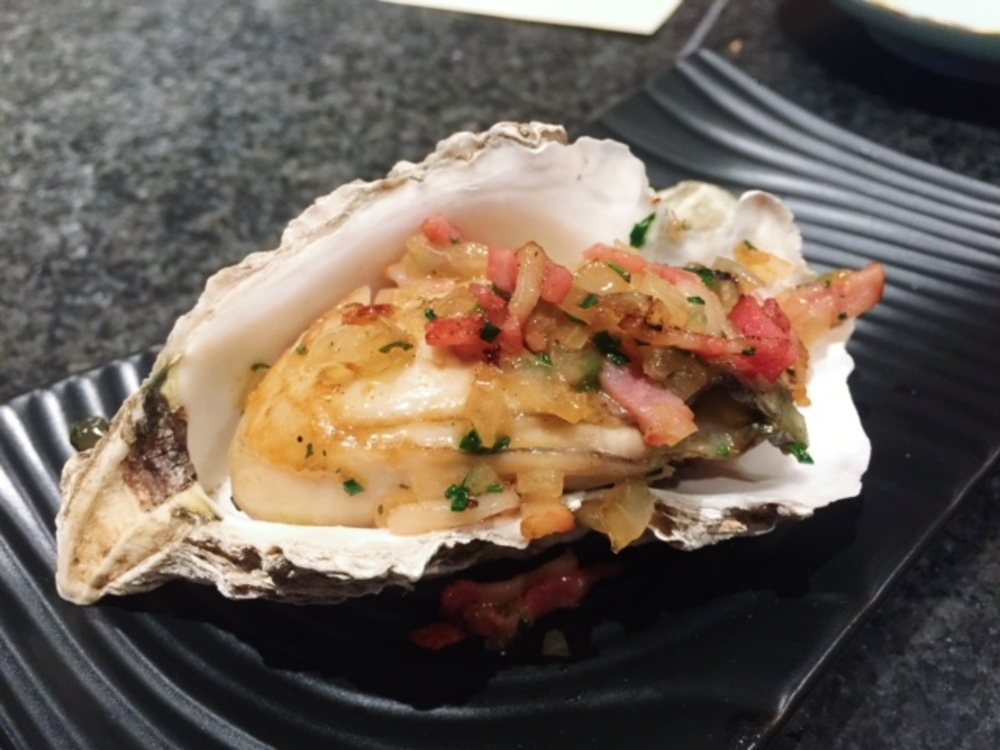 Freshly grilled in front of us to a perfect bouncy texture, the oyster came with a tasty topping of buttered onion and bacon. 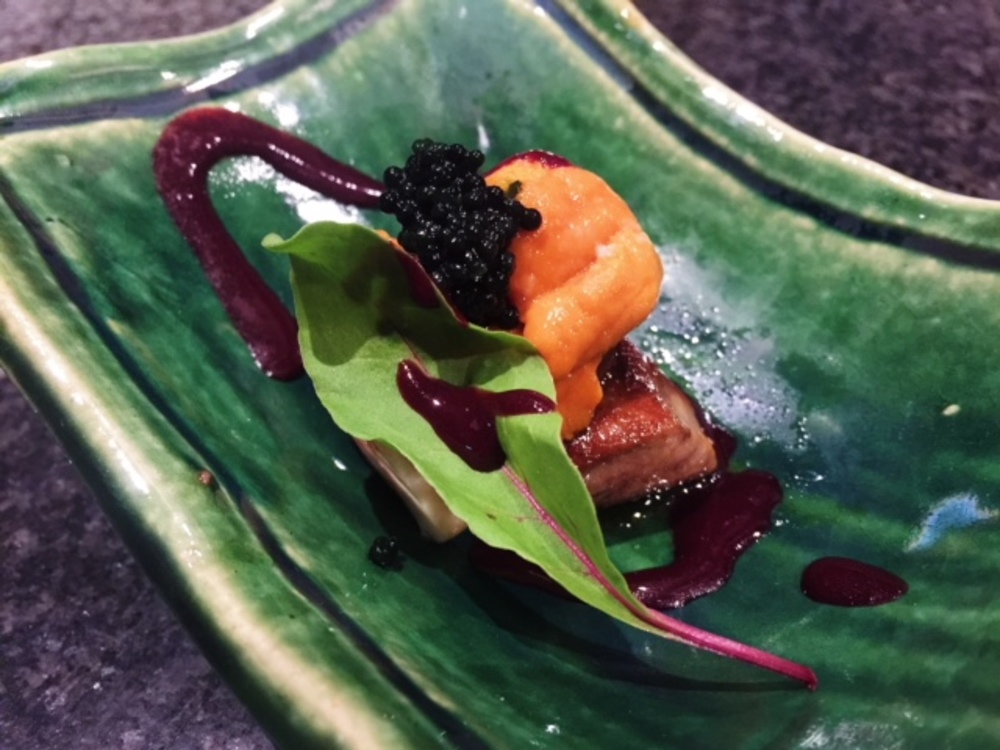 Luxury stacked into a high tower, the seared foie gras with fig, uni and caviar was a sight to behold. This dish is only available in the Ta-Ke set. 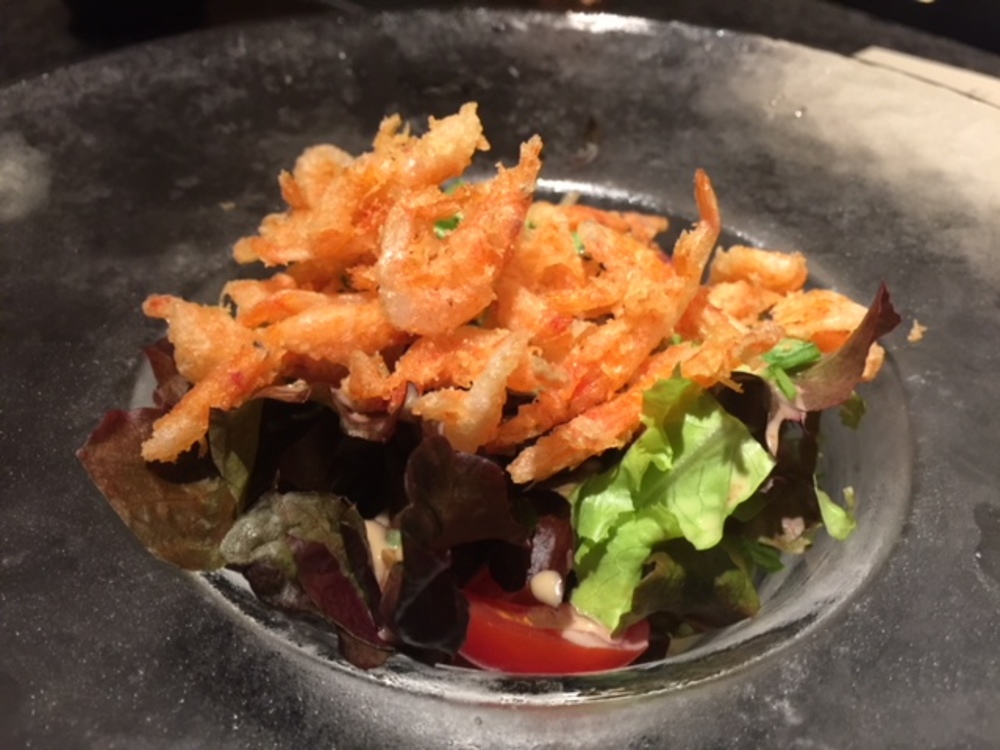 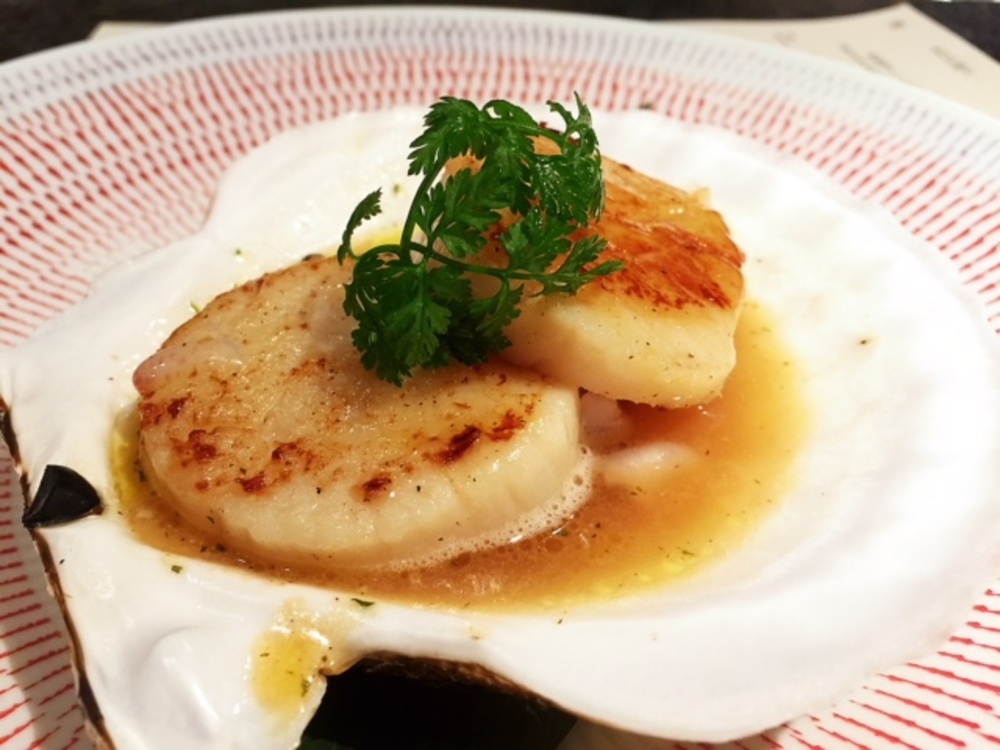 Plump, juicy Hokkaido scallops grilled with butter and sake. The sweet taste and bouncy texture of the scallops were seriously mouth-watering. This dish is only available in the Ta-ke set. 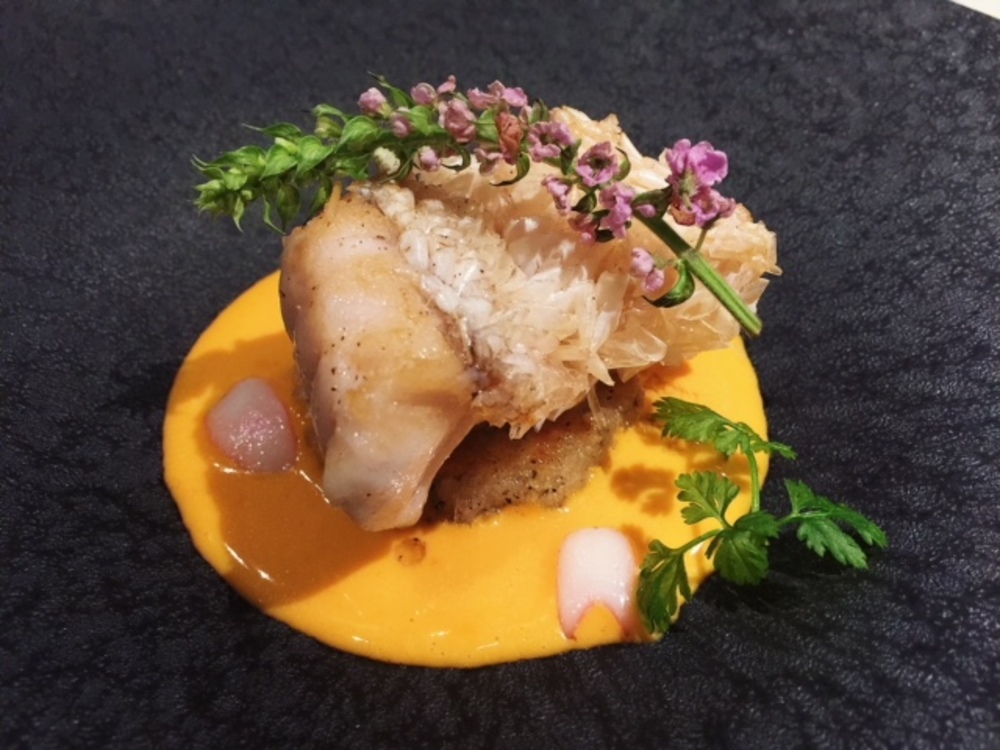 Almost too gorgeous to eat, the red tilefish in sea urchin sauce had an addictive crunch thanks to the crisp fish scales. This dish looked and tasted like a work of art. 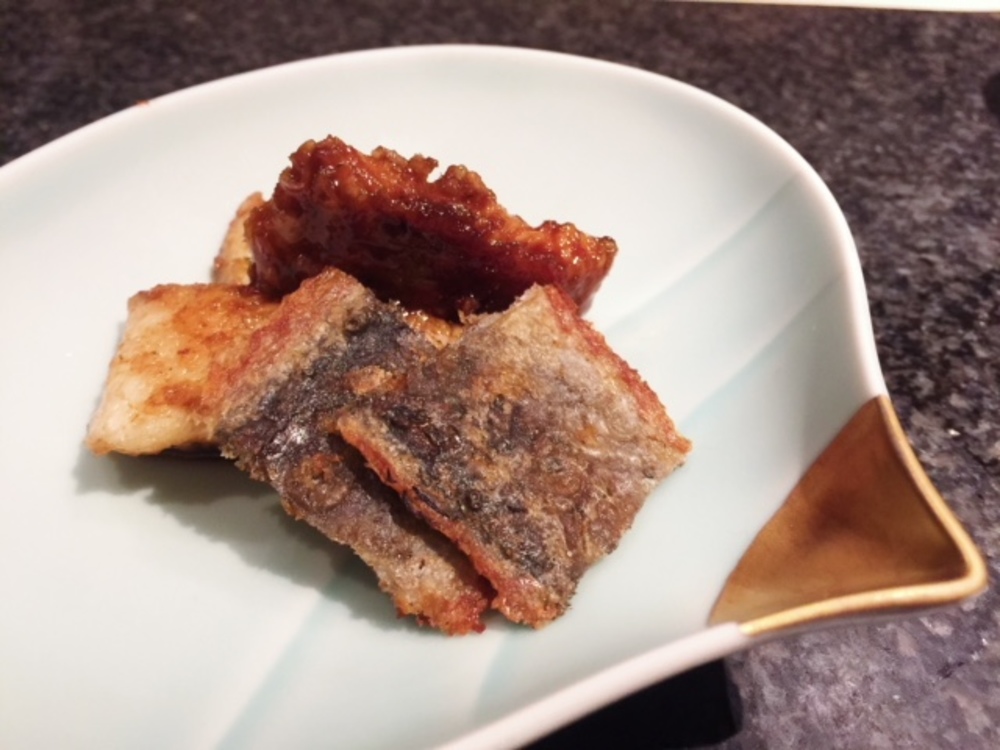 A bonus (not included in our sets) was the eel, with the skin and flesh grilled separately to retain an audible crunch to the skin. 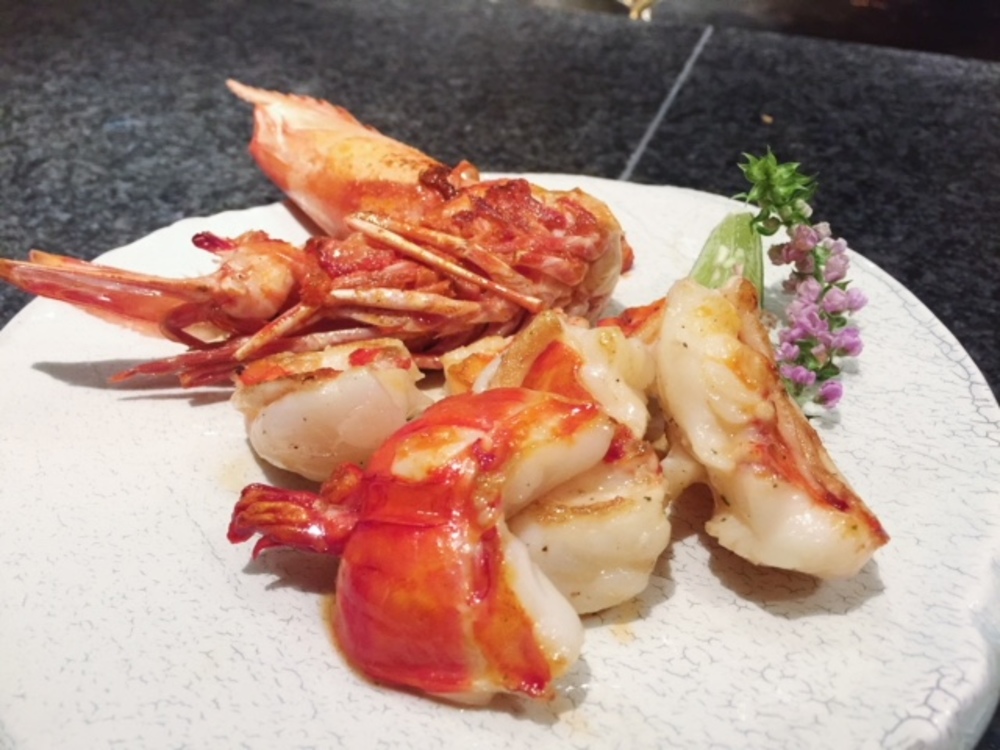 The Matsu set included a large grilled prawn. It was perfectly cooked to retain its bouncy texture, and the prawn head was expertly prepared to allow diners to indulge in the umami-rich prawn-head fat. 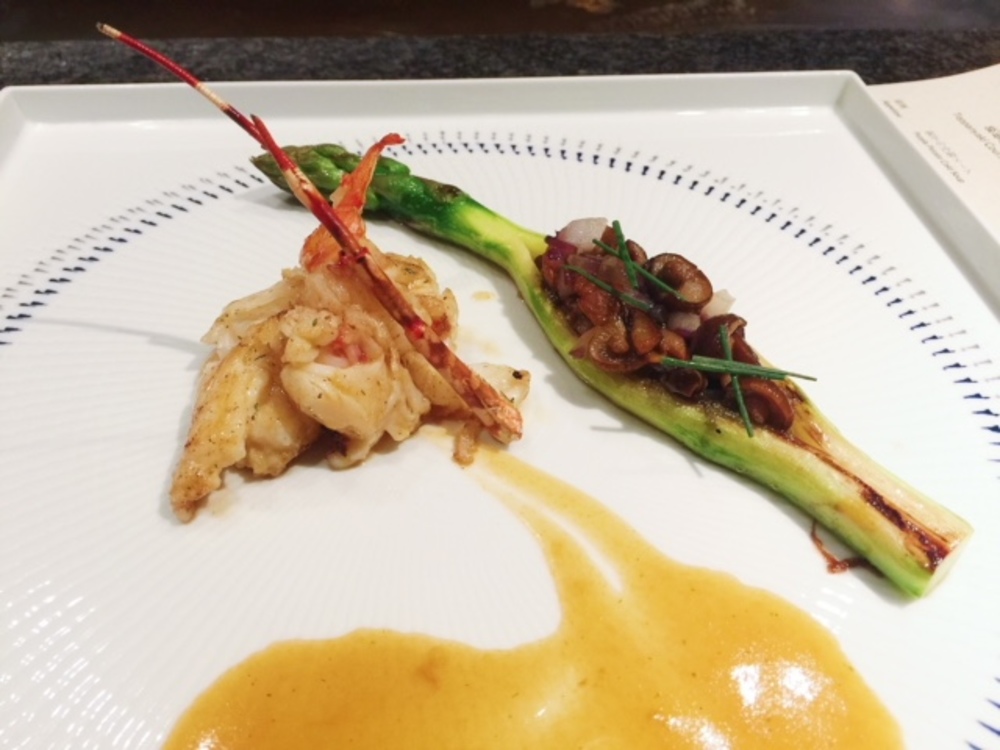 Half a spiny lobster was included in the Ta-ke set, and its flesh was tender and sweet. Grilled asparagus was fashioned like a boat, filled with slippery caramelised mushrooms punctuated by sweet onion. 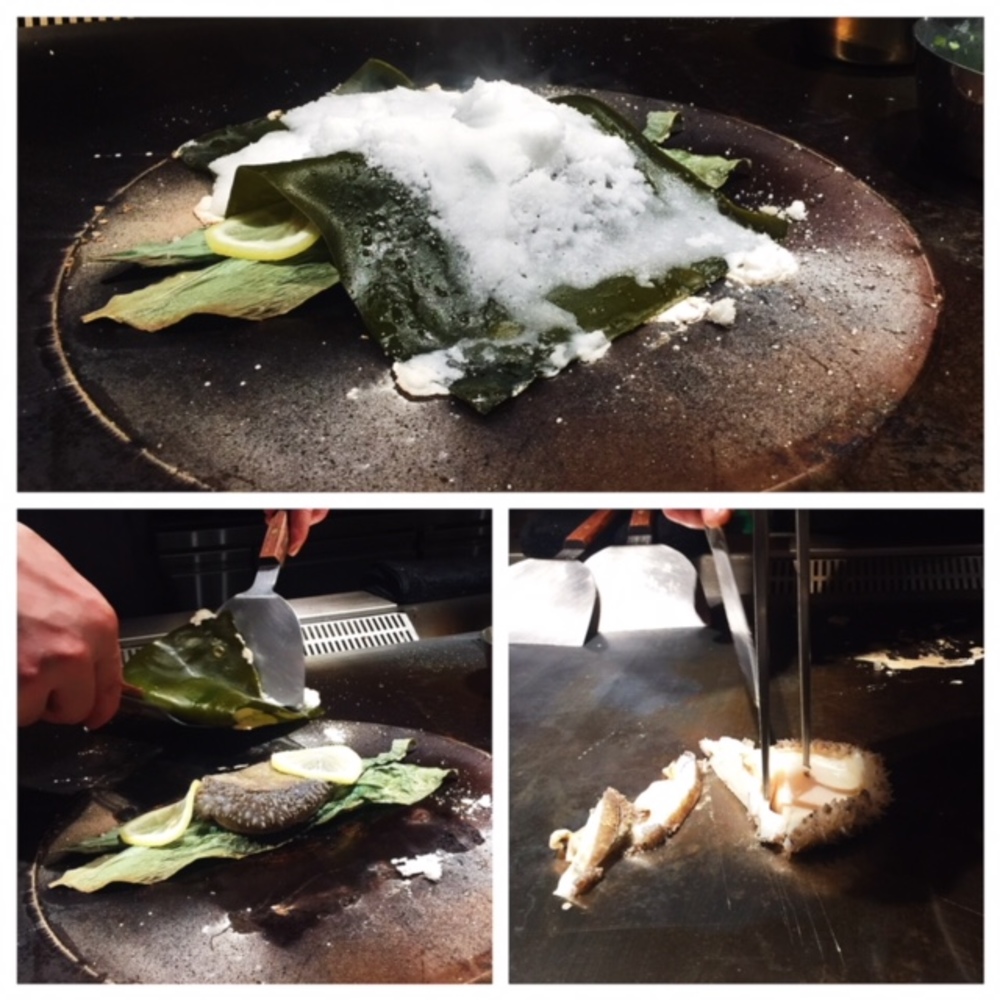 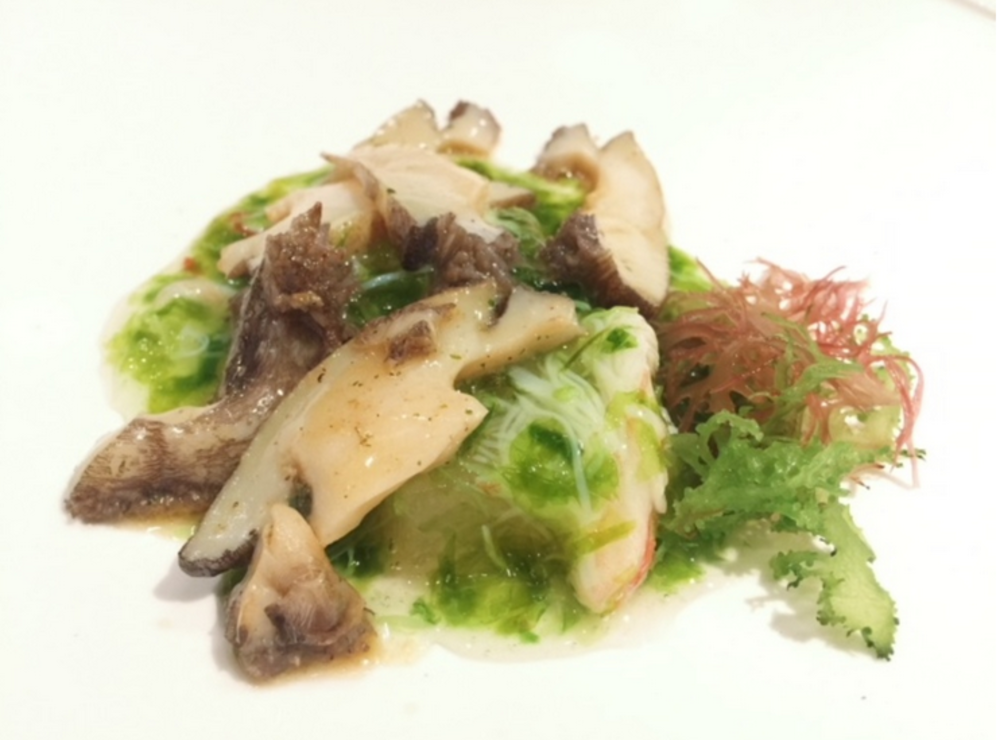 A large live South African abalone was included in the Matsu set. Bamboo leaves were laid on the hot grill surface before a fresh abalone was placed on top. Lemon and sake were drizzled on before the whole shellfish was blanketed in kombu (kelp) and weighted down with sea salt. The wrap was left to steam under a steel dome, infusing the shellfish with even more briny flavour from the sea.

After cooking, the shell was quickly removed along with the inedible bits, and the tender abalone was sliced and dressed with a seaweed and crab sauce. We’re not huge fans of abalone, but this dish won us over. 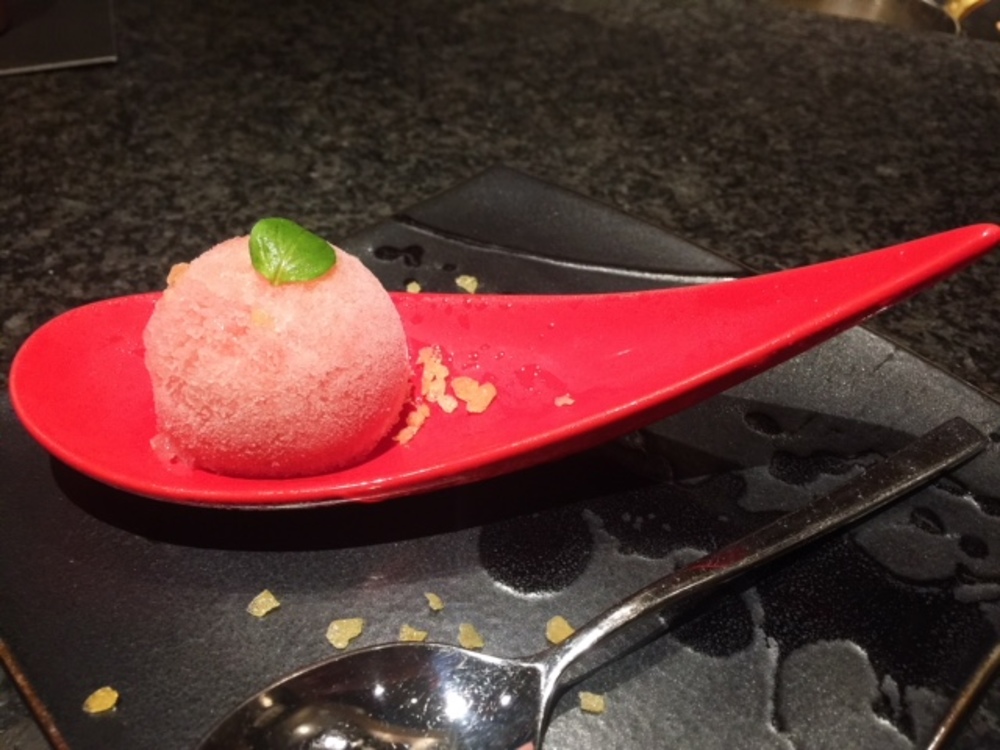 A scoop of apple sorbet with pop-rock crystals refreshed the palate. 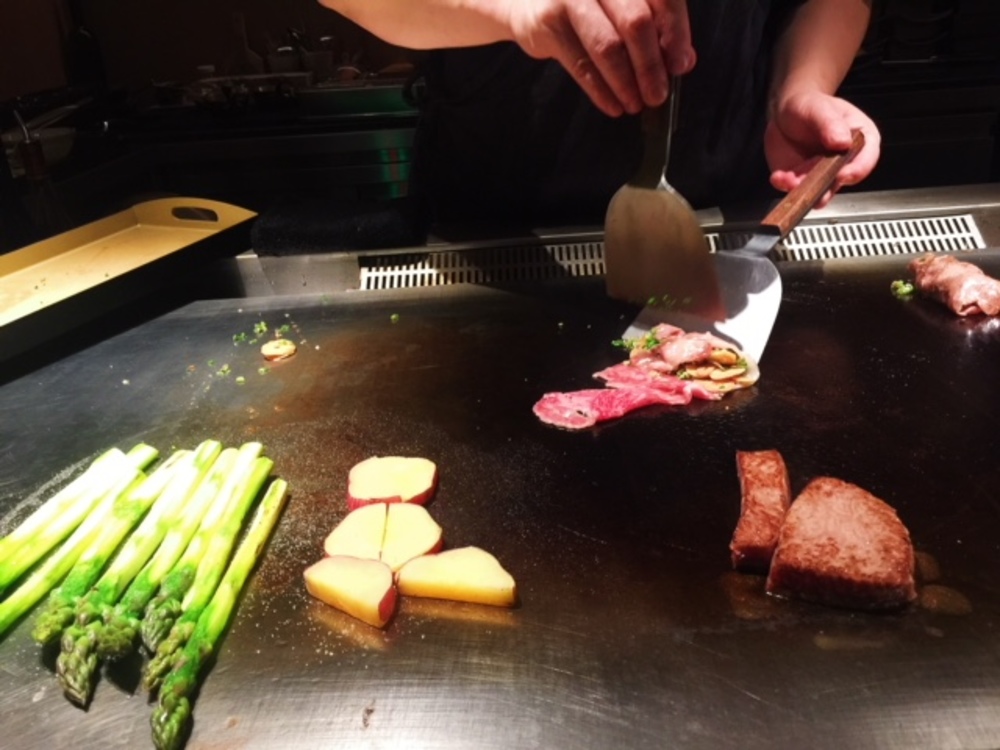 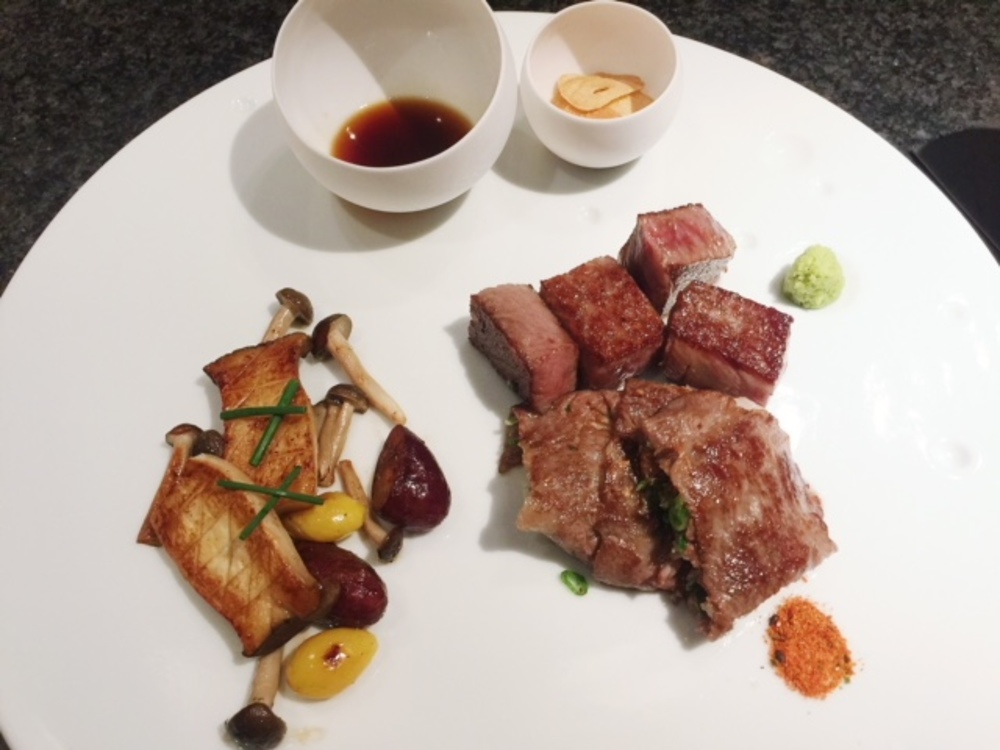 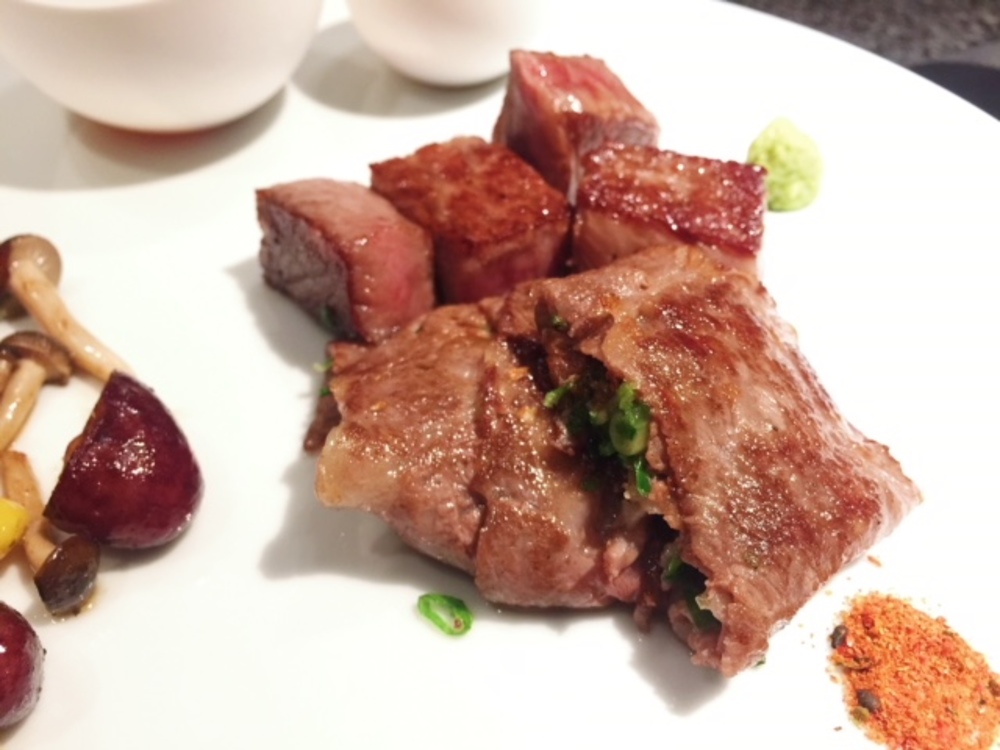 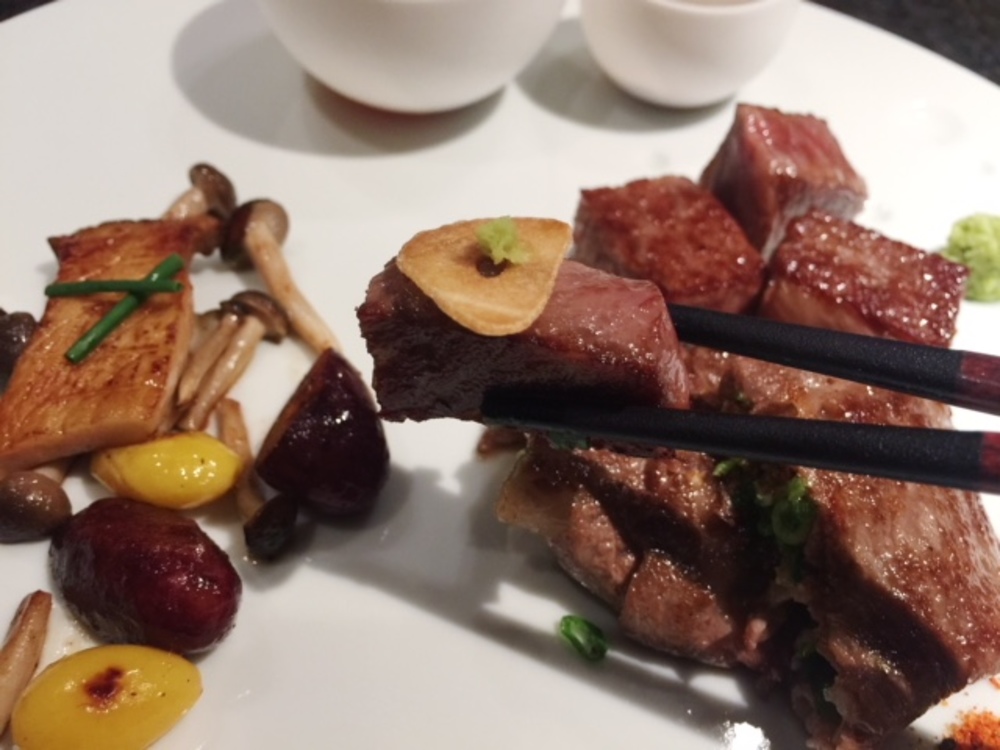 Thinly sliced Miyazaki Wagyu was included in the Matsu set. The buttery slices of beef were rolled around a filling of spring onion and crispy garlic for a flavour explosion.

We decided to share our beef, so the plates above include both cubed A5 Omi Wagyu from the Ta-ke set as well as the sliced Miyazaki rolls from the Matsu set. Each plate was accompanied with addictive fried garlic chips, shichimi, freshly grated wasabi and nutty caramelised mushrooms with gingko. 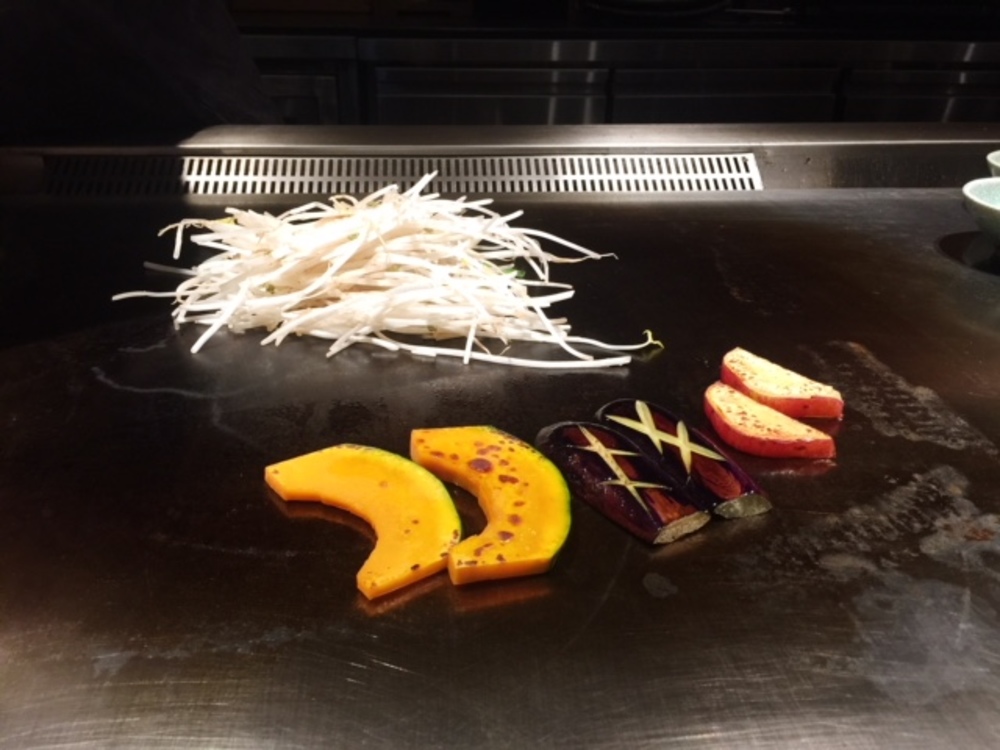 We got our veggie fix with grilled pumpkin, aubergine, sweet potato and a generous helping of crunchy bean sprouts. 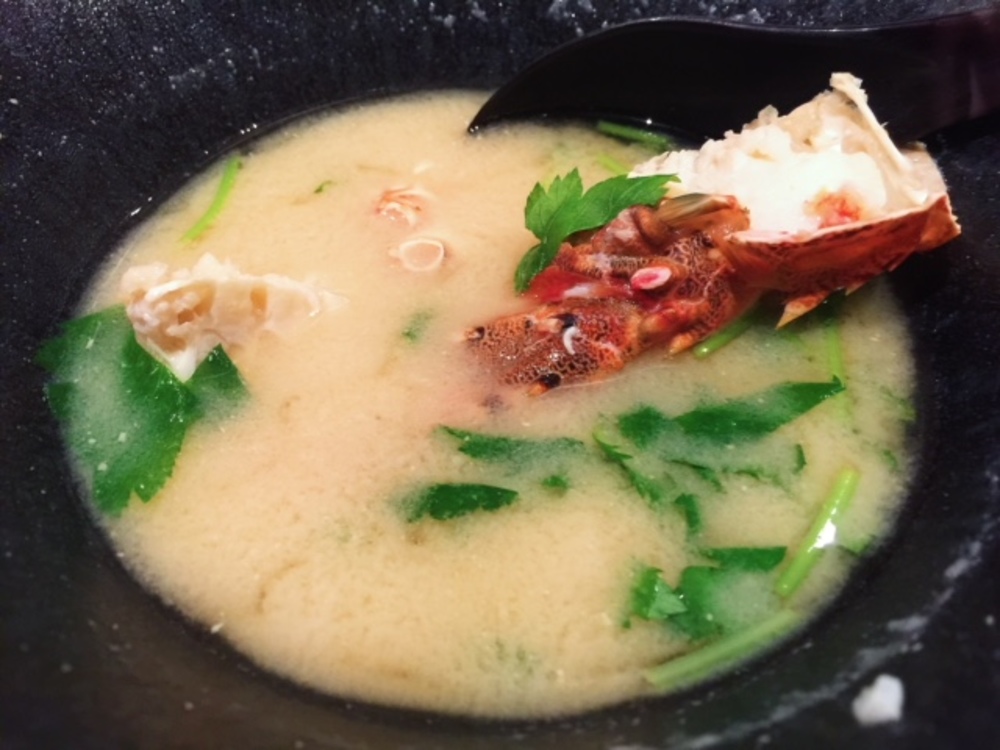 As part of the Ta-ke set, the lobster shell was made into a seafood-based miso broth. Regular miso soup accompanied the Matsu set.

Garlicky fried rice with tiny morsels of juicy beef made sure we didn’t leave hungry, although by this time we were nearly tipping over from fullness. We ate the rice so fast we didn’t get a chance to snap a photo. 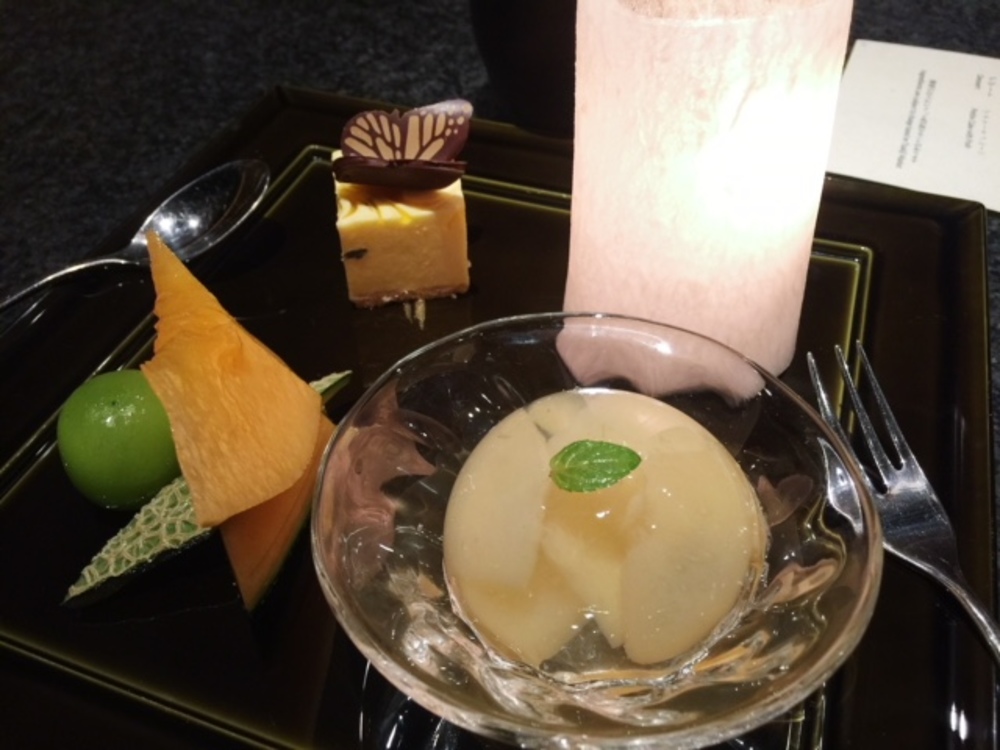 This is the best teppanyaki experience we’ve had in Hong Kong! From the ambience, to the dedicated, expert chef, to the choice ingredients, to the imaginative presentation, we were thoroughly impressed. It does cost a pretty penny, but when taken into account the quality of the ingredients and the work that’s put into creating each dish, we think this is money well spent. Not only does the intense flavour of each course make this meal memorable, but Chef Lam’s creative plating also sets this teppanyaki experience apart from the rest. Traditionally, teppanyaki is served as it is, straight from the grill, while Ta-ke’s creations are thoughtfully paired with delicate sauces and embellished with the type of plating seen at fine-dining restaurants. We will definitely be back for more.