We recently sat down to sample the NEW tasting menu of China Tang's Chef Albert Au, the youngest Chinese chef to awarded with three Michelin stars

Chinoiserie chic: Sir David Tang sure knows how to create ambiance, and his China Tang restaurant exudes Chinese refinement with a touch of European opulence and Art Deco accents. First opened in 2007 at London’s Dorchester Hotel, China Tang made its sojourn back to Asia with a second venue on the fourth floor of The Landmark Atrium. A meander through a maze of mirrors and walls lined with hand-embroidered wallpaper and intricate Chinese paintings takes diners into the main dining room, bordered with six private dining rooms for more cozy occasions. We recently sat down in one of their plush private dining rooms, complete with a private kitchen separated by a glass partition so we can catch all the action, to sample the new tasting menu by three Michelin-starred Chef Albert Au. The ever cheerful Chef Au began his culinary career at the tender age of 14, and honed his skills in refined Chinese cuisine both in Hong Kong and China. He became the youngest three Michelin-starred Chinese cuisine chef during his career at The Eight in the Grand Lisboa in Macau, and recently returned to Hong Kong as the Executive Chef of Lai Sun Group, a restaurant group that also owns Kowloon Tang and Island Tang.

Exquisite Chinese elegance: Our sumptuous supper began with light and fluffy pan-fried imperial bird’s nest and long jing tea smoked pigeon egg topped with caviar. The discs of bird’s nest were golden crispy on the outside with fluffy egg white centers punctuated by sweet garlicky scallions. The tea smoked egg had an almost gel-like consistency, and melted on the tongue like butter. 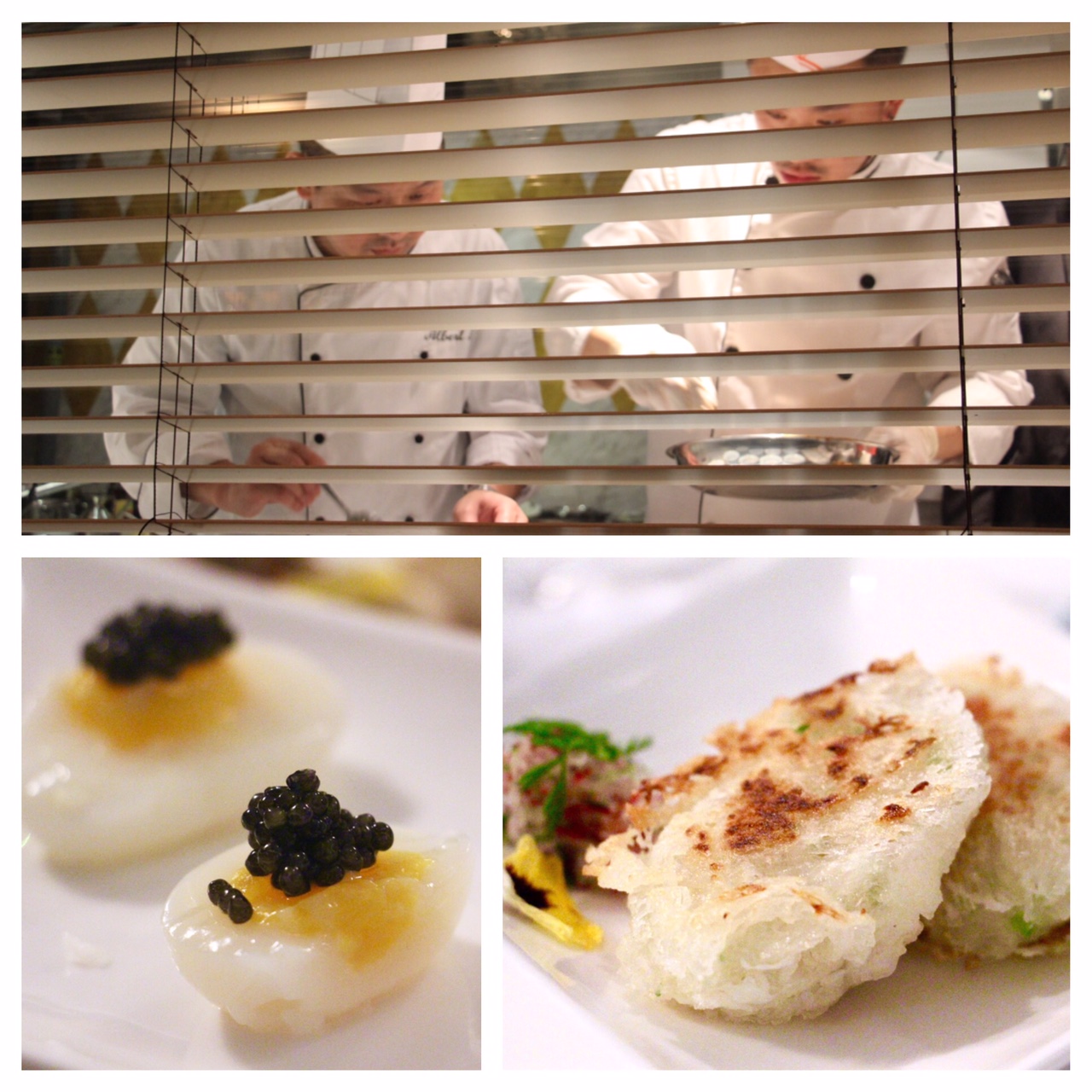 The double-boiled abalone soup with sea whelk and morel mushroom was comfort in a bowl, with meaty chunks of seafood seeped in a deeply layered consommé. The morels fully infused the soup with its earthy aroma, and complemented the sweetness of the seafood. 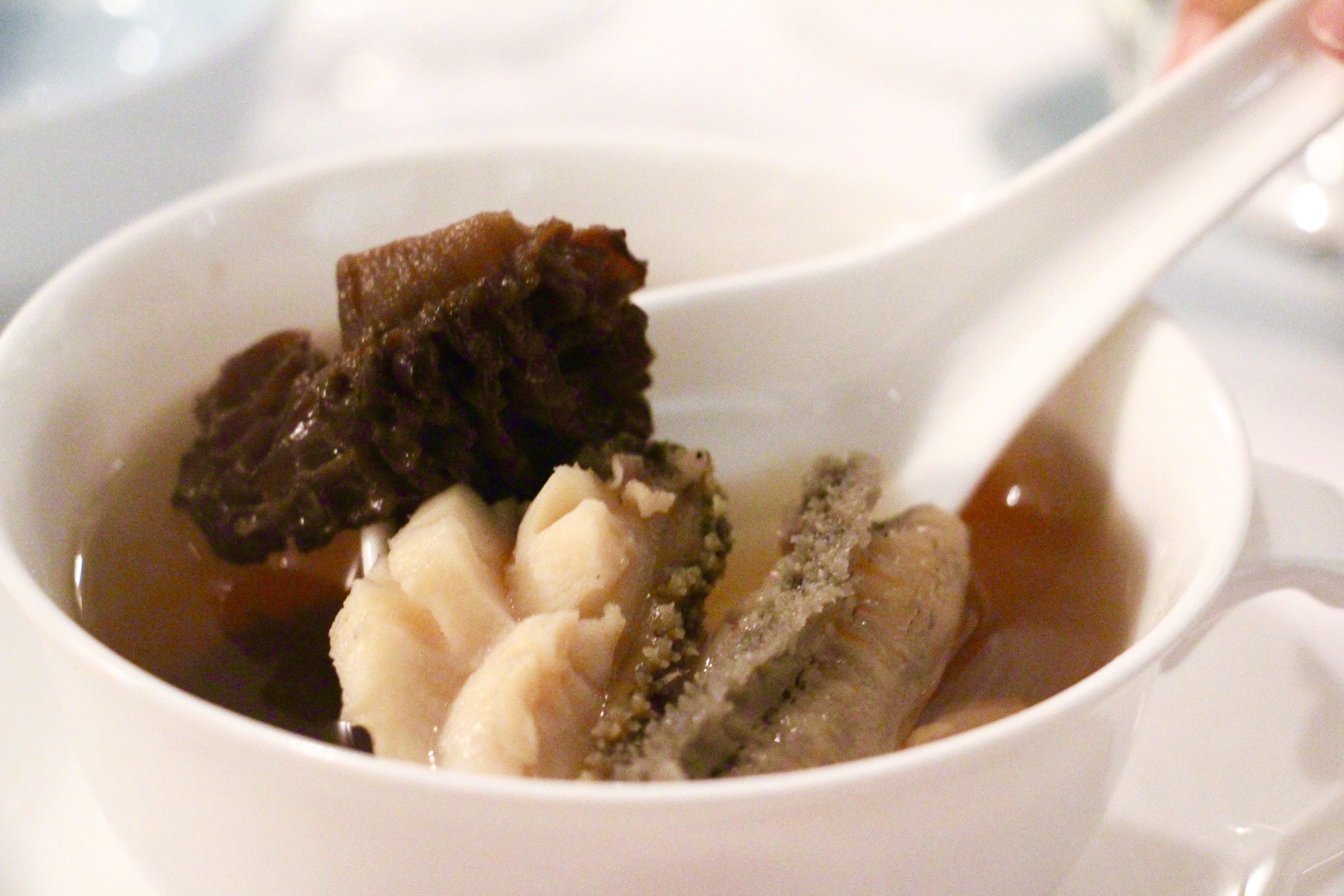 The braised jumbo crab claw with minced Iberico pork was a sight to behold. Imported from Macau, the crabs hail from a region where freshwater meets saltwater, and is well-known for their succulent sweet meat. Silky Iberico pork is mixed with the sweet crab, then braised in a briny black bean sauce to form the most delectable mince, topped with crispy strands of fried ginger. 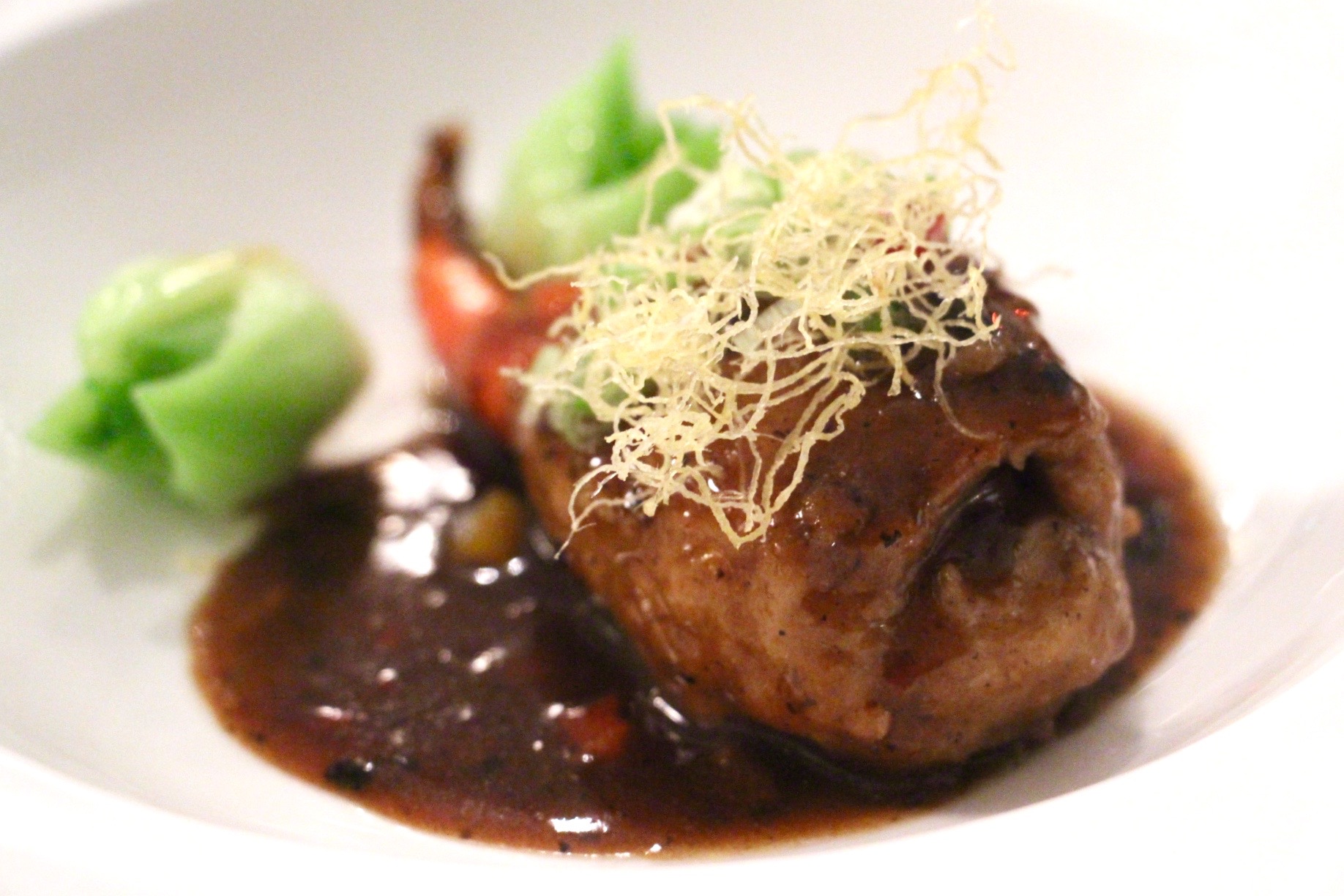 The giant sole arrived in a dome filled with apple wood smoke, and was topped with fried tea leaves. The tender fish was also fried in tea leaf oil, giving the flesh a delicate fragrance. The pièce de résistance arrived in the form of stewed pork belly seeped in red dates and candied fruit. The Japanese pork belly was incredibly tender and sticky with collagen, and the richness of the meat paired seamlessly with the sweet toastiness of the red date puree. We could have licked our plates clean! 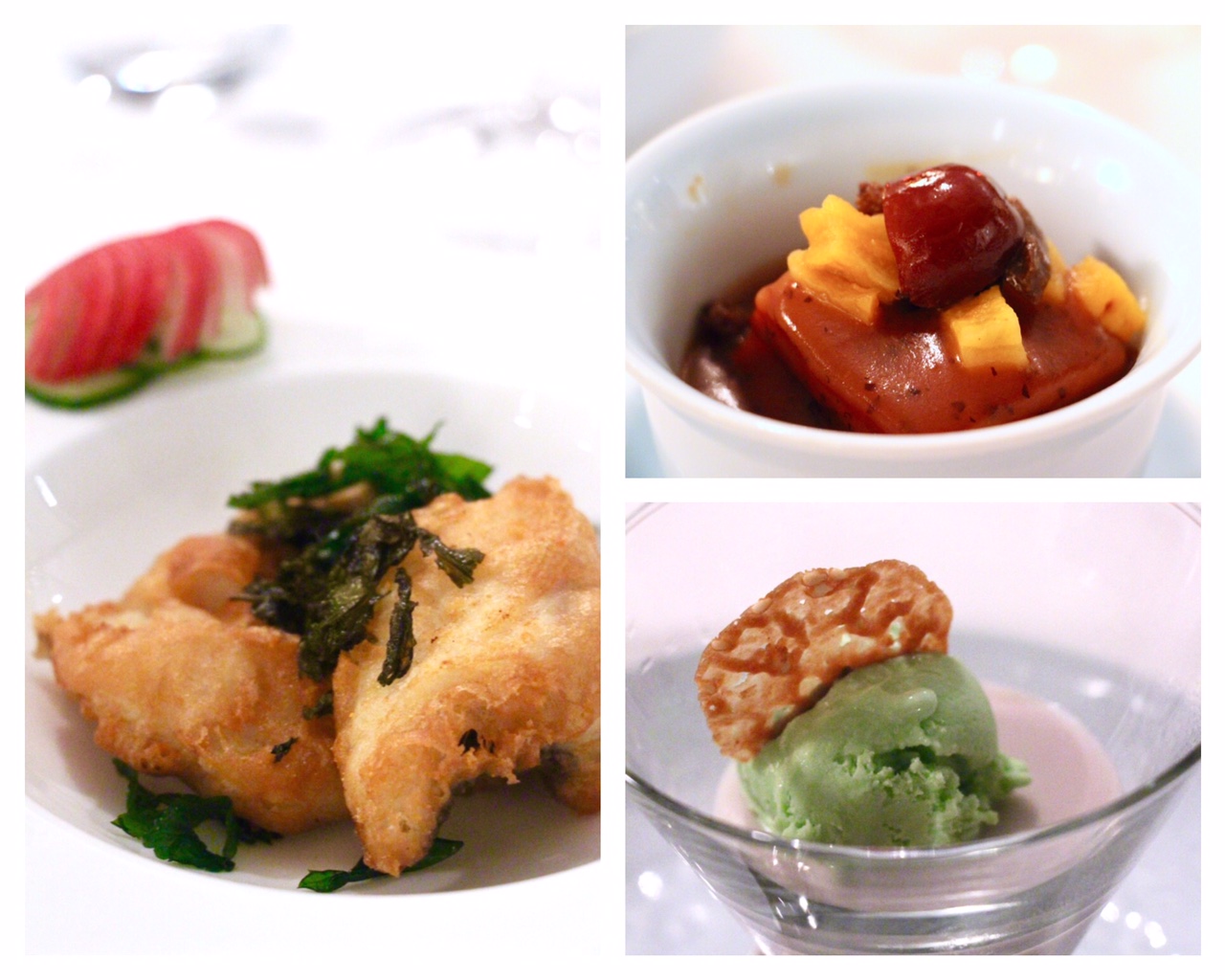 A testament to skilled knife work and patience, the steamed tien jin cabbage roulades in pumpkin cream was the most beautiful dish of the evening. The cabbage leaves, used as dumpling wrappers for the vegetarian filling, were sliced so thin they were almost translucent. The pumpkin cream was sweet and deliciously glossy - the perfect dipping sauce for the vegetable dumplings. 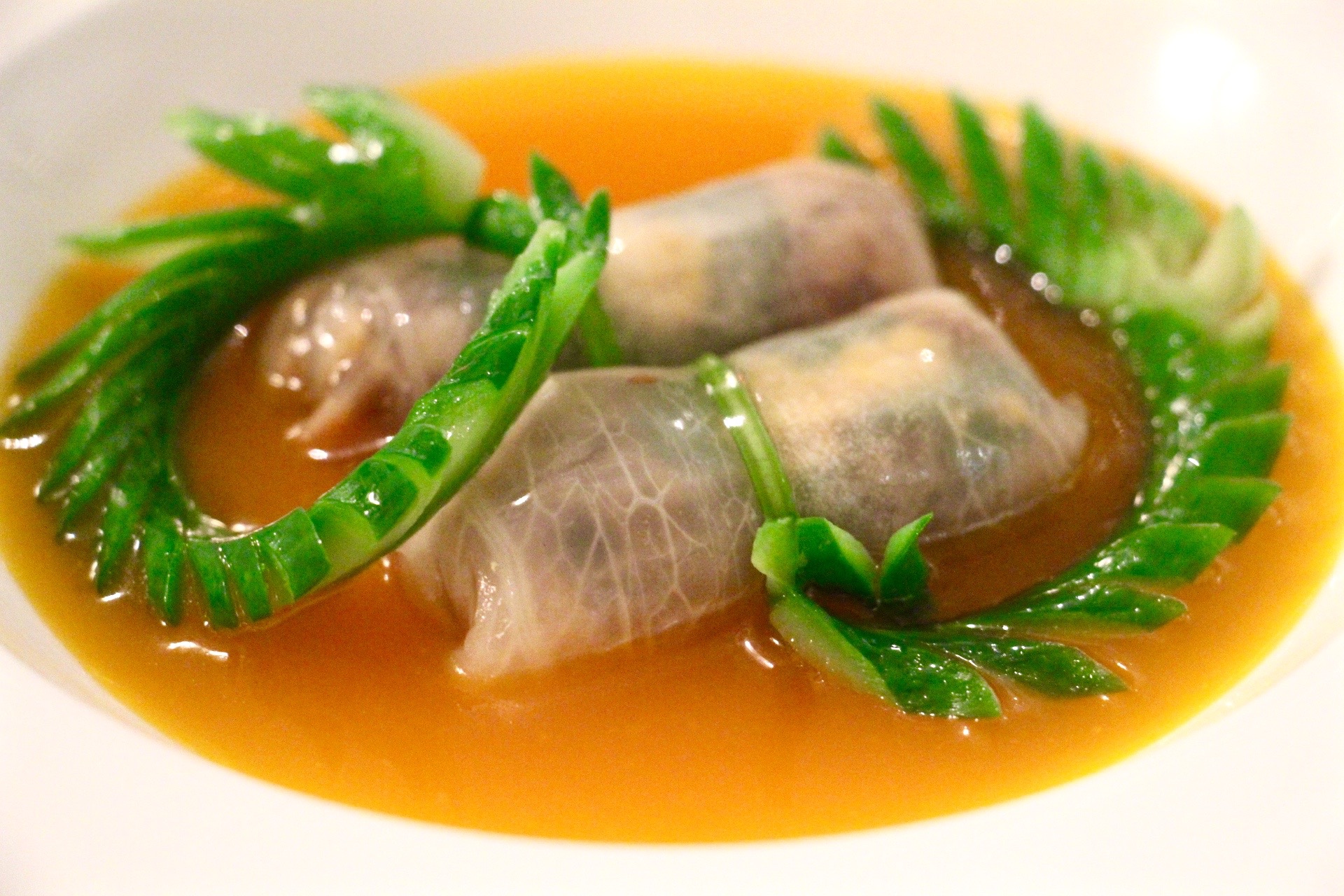 The fried rice with minced Wagyu came in a giant sizzling claypot, under a blanket of black Australian truffles. Each kernel of rice was plumped by simmering in beef bone broth, and accented with juicy cubes of Wagyu. Our decadent meal concluded with refreshing taro pudding and pandan ice cream, which were both incredibly aromatic and creamy. 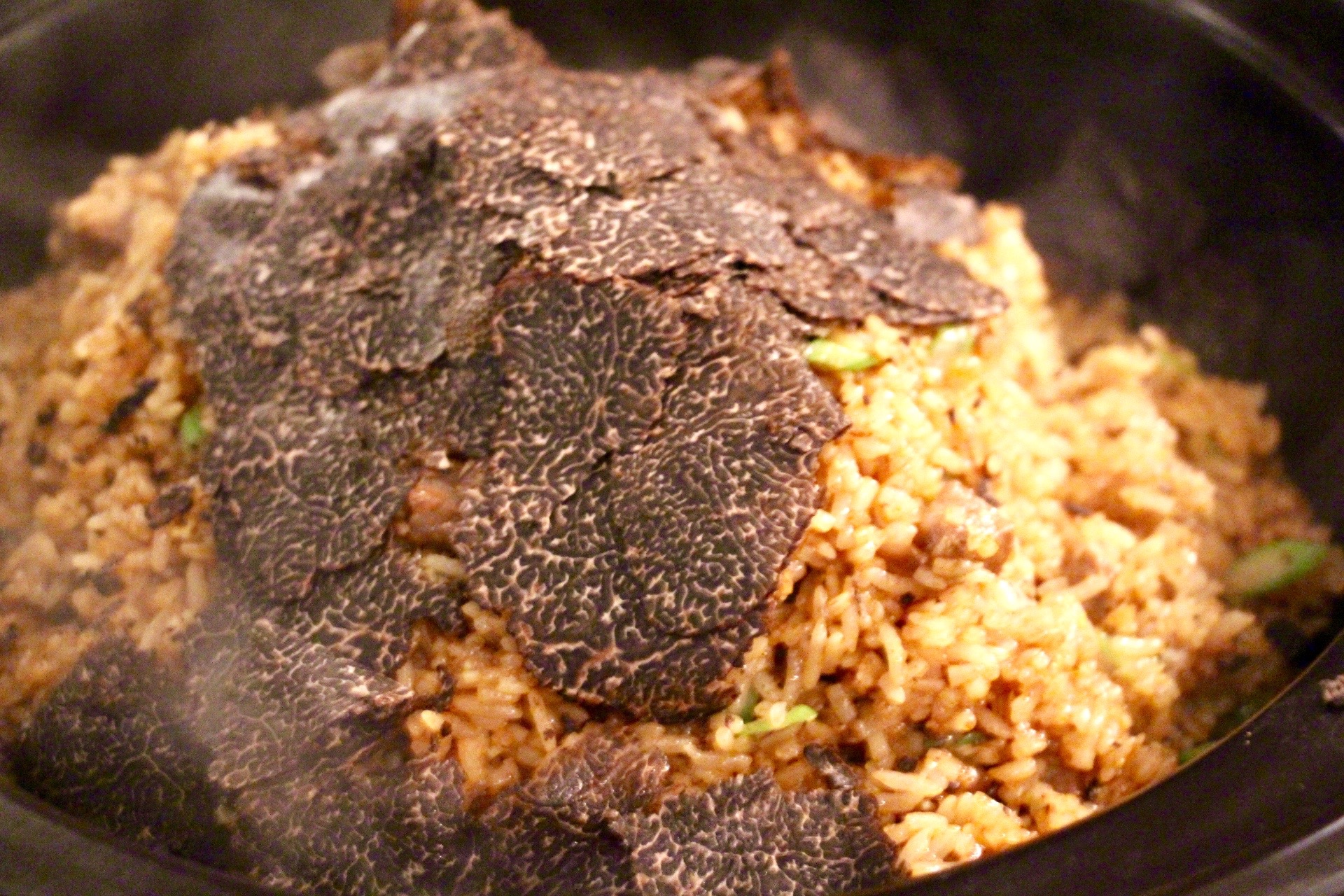 Verdict: Refined Chinese cuisine in a beautiful setting, China Tang is the ideal place to impress out-of-town guests with a taste of Hong Kong, or a celebratory meal with family and friends.  The intricate details of each dish exemplifies the history and mastery of one of the oldest culinary traditions. The private dining room, with its own separate kitchen, is definitely a treat, as guests can watch the Michelin-starred chef masterfully craft each dish.