Bringing a taste of Americana to Hong Kong, we bypassed the queues and got an exclusive sneak peek at this soon-to-open American diner

A Bite of Americana Glory

Although The Cheesecake Factory is slated to officially open on 1 May 2017, we got a sneak peek of the offerings before the launch date. Famous for their behemoth 20-page menu full of indulgent dishes and confections, The Cheesecake Factory arrives in Hong Kong in the form of a sprawling one-level restaurant opposite Prince Hotel in TST's Harbour City. Stepping into the massive space instantly took us back to the United States – well, Vegas, to be exact. A big screen TV dominates the sports bar whilst a generous display case showcases a treasure trove of cheesecake flavours. The decor, with earth-toned walls and dimmed wall sconces, reminded us of the restaurants found during Vegas' boom years.

Since the restaurant is currently in soft opening phase and caters only to friends and family, as well as the media, we were limited to a small section of the menu in order to not overtax the kitchen and staff. Despite it being a lunch tasting, we couldn't help ordering the well-mannered dirty martini ($108), which came with a skewer of green olives stuffed with blue cheese. At first sip, the slight earthy tang of the blue cheese accentuated the martini, but as the flavours had more time to mingle, the cheese proved too overpowering for the drink, especially when little crumbs of it started floating around the edges of the glass. 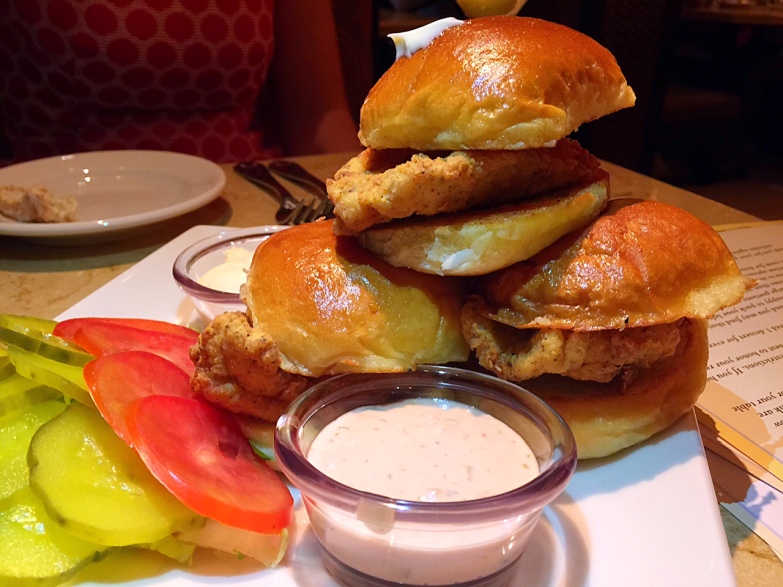 The last time we had any food at The Cheesecake Factory was more than a decade ago in Los Angeles, when their iconic avocado egg rolls felt like the height of culinary sophistication to our 18-year-old novice palates. Alas, the egg rolls, while still on the menu, were not served on the day of our visit, so we settled on Southern fried chicken sliders ($128) as an easy second contender. The breaded chicken breasts come sandwiched between well-buttered mini buns, with pickles and tomato on the side. We're not huge fans of battered chicken breasts in burgers – the result is often a stringy, dry disappointment. The Cheesecake Factory's version, however, proved to be addictively delicious and tender, with the light batter still holding plenty of crunch despite us leaving it to sit for well over 15 minutes. Four sliders came in this 'appetiser', making us tremble in anticipation of what a 'main' portion would look like. 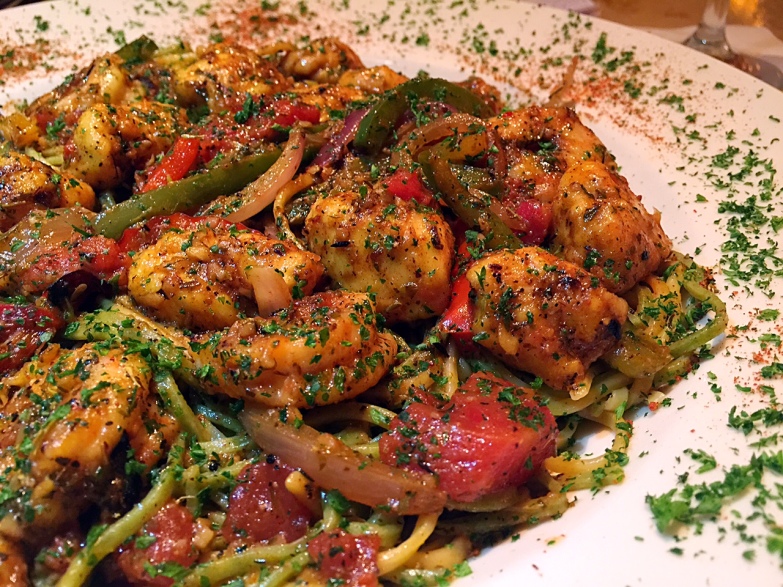 On the recommendation of our server, we settled on the Cajun jambalaya pasta ($206) for our main. Topped with shrimp and chicken tossed with tomato, peppers and onions in a spicy Cajun sauce, the pasta was a ginormous, hearty dish scattered with plenty of fresh herbs. We could have easily split this between four people! The general flavour was good, although it didn't have quite the satisfying comfort of an authentic jambalaya once it was plated with linguine. The pasta's texture was more like local e-fu noodles rather than having the al dente bite of fresh linguine. 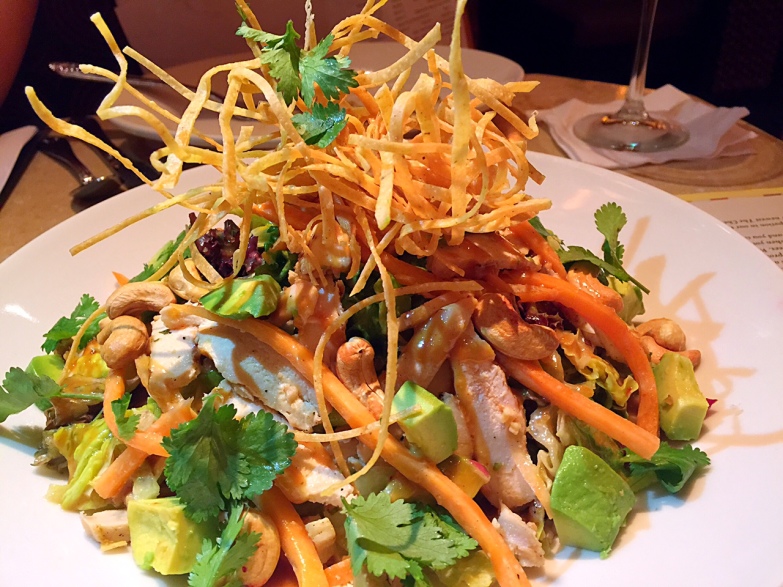 We couldn't pass up a salad named after the founder's wife, so we had to order Sheila's chicken and avocado salad ($166), which was one of the restaurant's lunch specials. The bountiful salad was a potpourri of grilled chicken, cubed avocado, carrot, mixed greens and cashews, all drizzled generously with citrus-honey peanut sauce. Crowned with crispy tortilla strips, the general aesthetics of the dish reminded us of Wolfgang Puck's dishes of the 90s. Definitely a sharing plate, the salad was delicious in small portions, but the sweet peanut dressing got a bit overwhelming after a few bites. 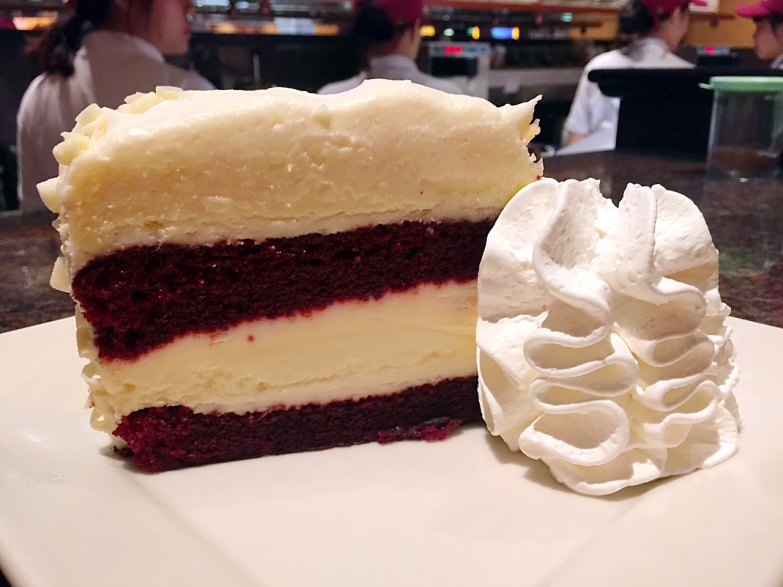 We were like kids in a candy shop when it came to picking our dessert – so excited yet so bewildered. With over 30 flavours of cake on offer, some of which were at least eight layers tall, we finally settled on the ultimate red velvet ($79). The dessert came with generous layers of sweet, indulgent cream cheese and a couple thin layers of cake. Every mouthful tasted so good...yet felt so bad as our calorie count skyrocketed. 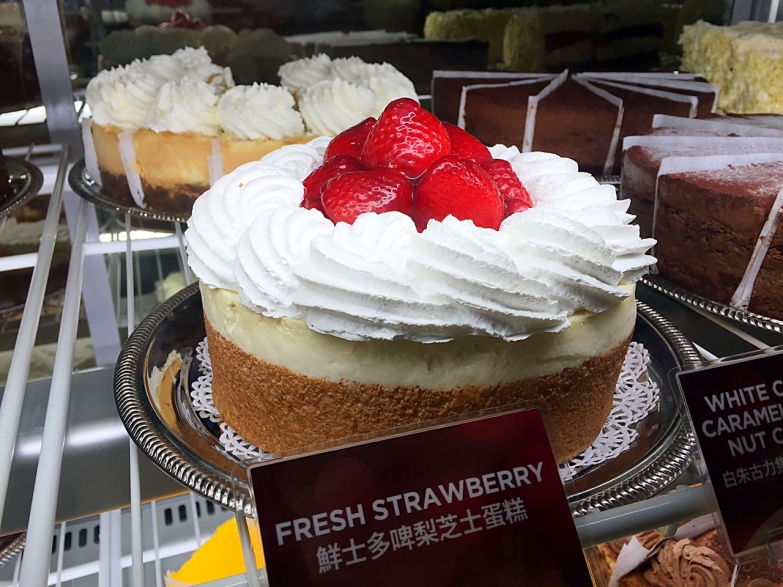 We also couldn't resist the fresh strawberry cheesecake ($79), the restaurant's most popular flavour for over 35 years – the vivid glazed strawberries looked too luscious to pass up. We liked the overall texture and taste of the cheesecake, but we felt that the strawberries lacked any actual berry flavour. The glaze was overwhelming, and the strawberries tasted like artificial fruit candy rather than real fruit. Next time, we'll stick with the original cheesecake – or go for the mile-high 30th anniversary chocolate cheesecake layered with fudge and truffle cream.

Despite some shortcomings, we generally enjoyed our meal here. This is the kind of restaurant that you don't want to overthink – just let yourself enjoy the overindulgence. The menu is a time-tested tome of favourite American comfort foods, and it will definitely hit the spot for any homesick expats hankering for a taste of home. The Hong Kong location shares the same menu as the 209 other branches around the world and is backed by Maxim's Group. We will be back to overindulge again, but next time, we'll make sure to book a solid hour of circuit training afterwards. 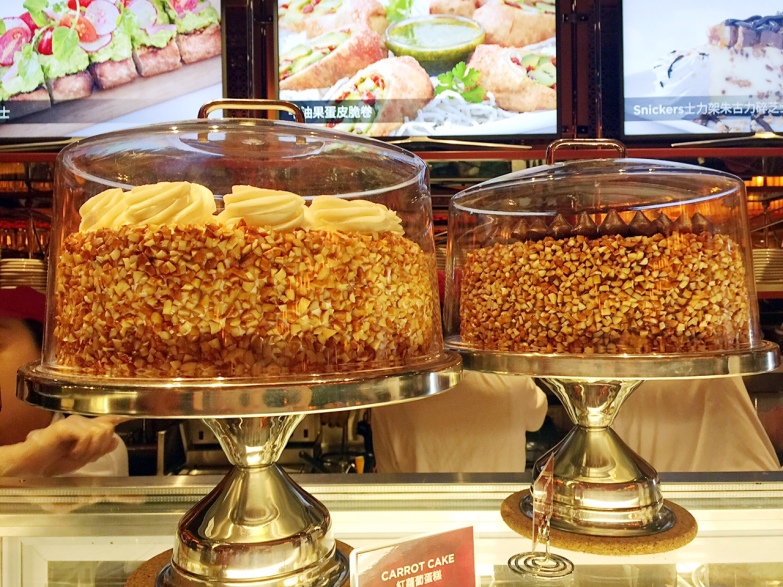