Those restaurants that fly in fabled interior designers from Neptune make an essential mistake: you can’t eat interior design (though, to be fair, a number of dogs you’ve known disagree). And, more often than not, the food served in such digs is hardly worth eating (unless someone else pays). An exquisite setting is fine, but food is paramount. It is all the intelligence, life experience, artistic sentiment, culinary heritage and technical virtuosity of a chef combobulated on a plate. It is opera that you eat. Little Kitchen takes its design cues from its plain-spoken neighbourhood of noodle shops and markets, but it sings magnificently.

The chief waiter somehow divines your name before you announce yourself and warmly greets you. Little Kitchen does not sell wine and allows you to bring your own with no corkage, which is almost unprecedented – and much appreciated – a sign that avarice is not this restaurant’s lodestar. Your Lambrusco (aperitif) and Moscatel (dessert), which would be unaffordable (and probably unavailable) otherwise, are immediately whisked offstage and put on ice. The Malbec is kept offstage for decanting later. You are seated at a table for four, no tablecloth, that is large enough to allow you and your wife privacy despite the other couple. The room, with open kitchen, is plain and pure, beautiful and comforting in its simplicity.

Superb warm baguette and salted butter is placed in front of you. You’re brought an amuse-gueule consisting of a coin of seared ground chicken within a bouffant choux pastry. There’s a daub of sauce and a cockade of what might have been a date, a tiny tile of jelly and a bit of green leaf – complicated stuff requiring tweezer work. It’s served warm. It’s a delicious slider, as fine a starting spark to a meal as you’ve ever had.

You and your wife drink your chilled Radice Paltrinieri, a light-hearted rosé Lambrusco, and make marital eyes. A first course is served: bowls of potato bisque with just enough cream and stock and a small post of potato two ways (a ball and mashed). There’s a cupola of crème fraiche dotted with poppy seeds, what you think are shreds of caramelised leek alongside and a flat ribbon of cracker for crunch. It’s food sculpture and it is served with particular style, bisque poured into the bowl from a silver teapot. It’s immediately evident that, for this chef, flavour is paramount. But beauty is not neglected. It’s an exaltation of potato, a culinary per aspera ad astra. From the mud (where potatoes grow) to the stars (Little Kitchen).

As a fine story arcs – carrying you forward, revealing character – so should a fine meal. The next course consists of cylindrical wholewheat crêpes, sheafed together like stalks of wheat, in a puddle of stock, encasing small sautéed chanterelle mushrooms and duxelles, crowned with a wild updo of paper-thin mushroom slices. There is a crunch of mushroom meringue just beneath the updo, simple, inconceivably flavourful, bespeaking the sharpest culinary wit. It speaks of mushrooms and of the chef who speaks of mushrooms. At the same time, the dish is visual art. You only wish that the fellow sitting next to you, who is eating with one hand and phone-surfing with the other, understood. But this is old hat, and unquestionably he’d eat one were it served. 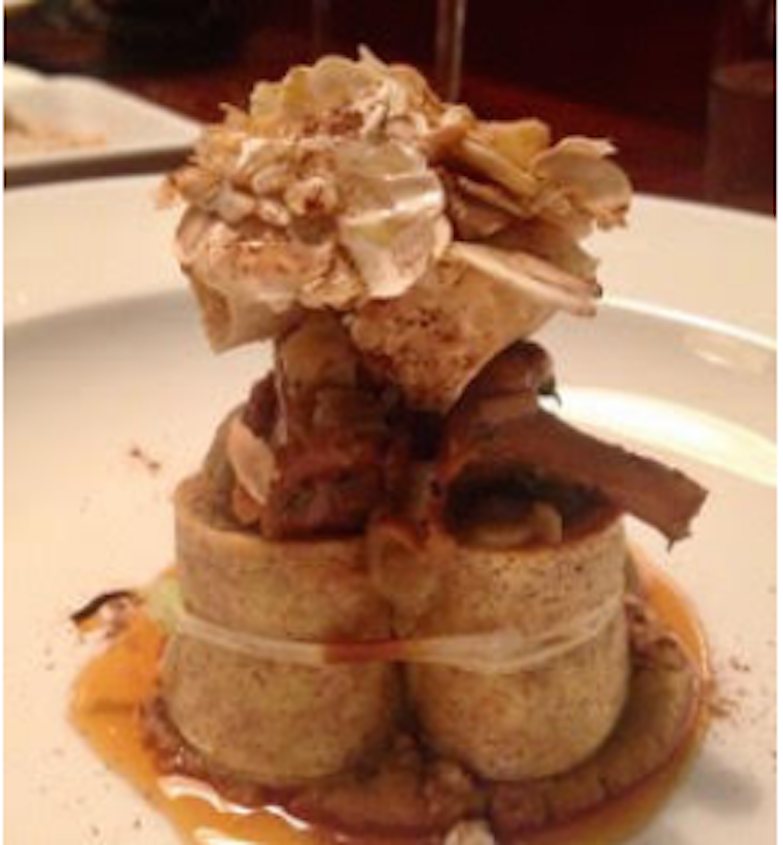 The table is swabbed. Malbec decanted. Your wife – family sommelier – triumphs again. Duck is served. It is an autumn collage. Perfect baby parsnips. A few green leaves. An underlayment of celery-root cream that is echoed in a sphere of the same cream within a crêpe. A compass of thin duck slices, medium rare, skin crisp and salted, as well as a knuckle of  the most ducky duck rillettes, are stylishly anointed with duck jus from a small pitcher. This is an extraordinarily difficult dish, compounding so many complex components, temperatures, textures, tastes. It is a fluid physics experiment presented in momentary stasis, bringing extreme pleasure. Little Kitchen’s duck is a tour de force, outdoing all the ducky Michelin stars you’ve previously ingested. 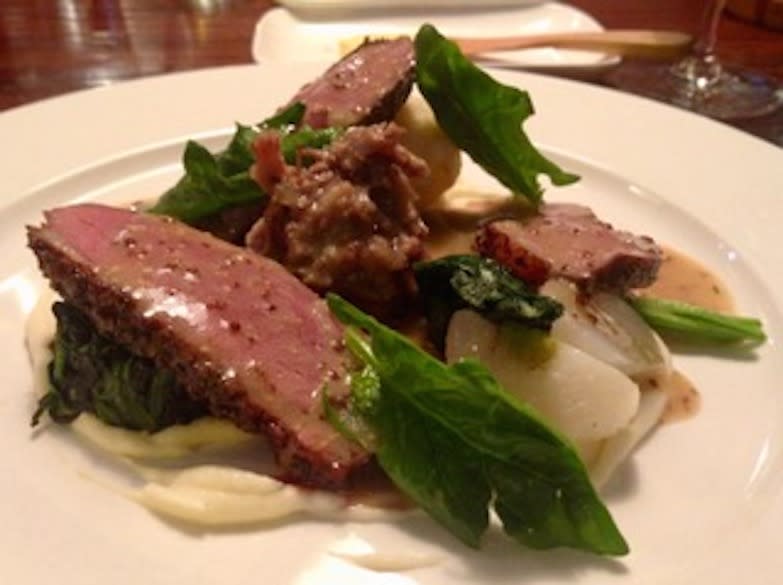 You feel complaintive at nothing to complain about, and dessert offers no relief. It is a classic apple tart, a hockey puck of warm puff pastry filled with apple slices on end. It is coffee-table cookbook exquisite, looking like a gear in an organic machine, a product of the highest technical skill. On top, two dried apple slices open like flower petals, holding a quenelle of vanilla ice cream. A Lilliputian pitcher of brandied salted caramel sauce is brought, the better to stop your heart at this moment of ecstasy. 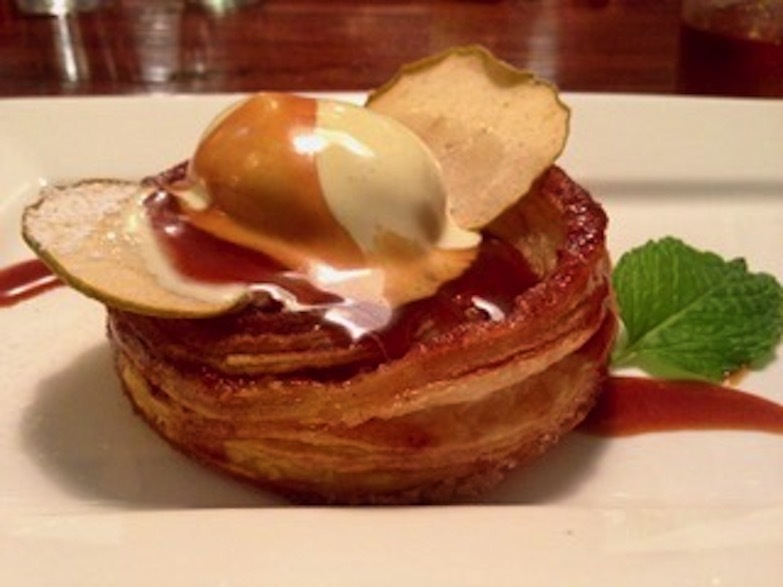 Little Kitchen takes mainly commonplace ingredients and gloriously intensifies them with remarkable technique and aesthetic vision. Service is attentive, professional and tinged appropriately with warmth. Per aspera ad astra applies, in fact, not just to the bisque but to the entire endeavour, taking plain stuff and elevating it to the heavenly.

Hong Kong seems to be liberally, perhaps too liberally, dusted with Michelin stars, while extraordinary restaurants in other cities are inexplicably overlooked. Michelin inspectors: come to Little Kitchen. It genuinely deserves one star: a good place to stop on your journey, indicating a very good restaurant in its category, offering cuisine prepared to a consistently high standard. And, at the risk of audacity, two stars isn’t a stretch: a restaurant worth a detour, indicating excellent cuisine and skillfully and carefully crafted dishes of outstanding quality. This accurately captures Little Kitchen. If you’re planning a trip to Hong Kong, it’s worth making reservations here months ahead.

Before you depart, Chef David Forestell personally gives each of you a small bag, inside of which is a warm almond cookie. His lodestar is binary: artistry and warmth.

The price is $550 apiece for a fixed four-course menu, no service charge. This is less than the cost of many main courses at other places dishing out riblets and pasta à la something or other. You’re blown away.