The namesake brewery of our fine city delivers ales to be proud of. A review of Hong Kong Craft Beer: HK Beer Co. in Chai Wan

HK Beer Co. is the second stop on my series of Hong Kong craft brewery reviews. My first review on the Black Kite Brewery, a new operation in Wong Chuk Hang, featured some solid beers that were classic to their styles. HK Beer Co. on the other hand, located in Chai Wan, and being the biggest craft brewery in Hong Kong, has a bigger variety with some interesting twists to classic beer styles.

Having started the initial operation in 1995, HK Beer Co. was given a new lease of life in 2013 under new ownership and direction with the guidance of head-brewer Simon Pesch. Simon brings with him over two decades of professional brewing experience from the USA, which in itself is an exciting prospect for craft beer drinkers in Hong Kong.

One of my favourite aspects of the beers produced by HK Beer Co. has to be the labels. Every beer is named after an aspect of Hong Kong, either in the present day or in our history. The tongue-in-cheek nature of some of the names gives the beers a great sense of identity and pride in terms of representing our city.

The first beer I tried, the Gambler’s Gold Golden Ale, named after our city’s obsessive gambling culture, whether it’s the races on a Wednesday or a spontaneous trip to Macau, gives off strong tropical notes to the nose. Hints of pineapple and citrus lead into a light bodied ale, with a slightly hopped bitterness towards the tail, originating from the dry hopping process. Albeit, a little thin on the palate, it is smooth and clear. This is one to earmark for your next junk trip. 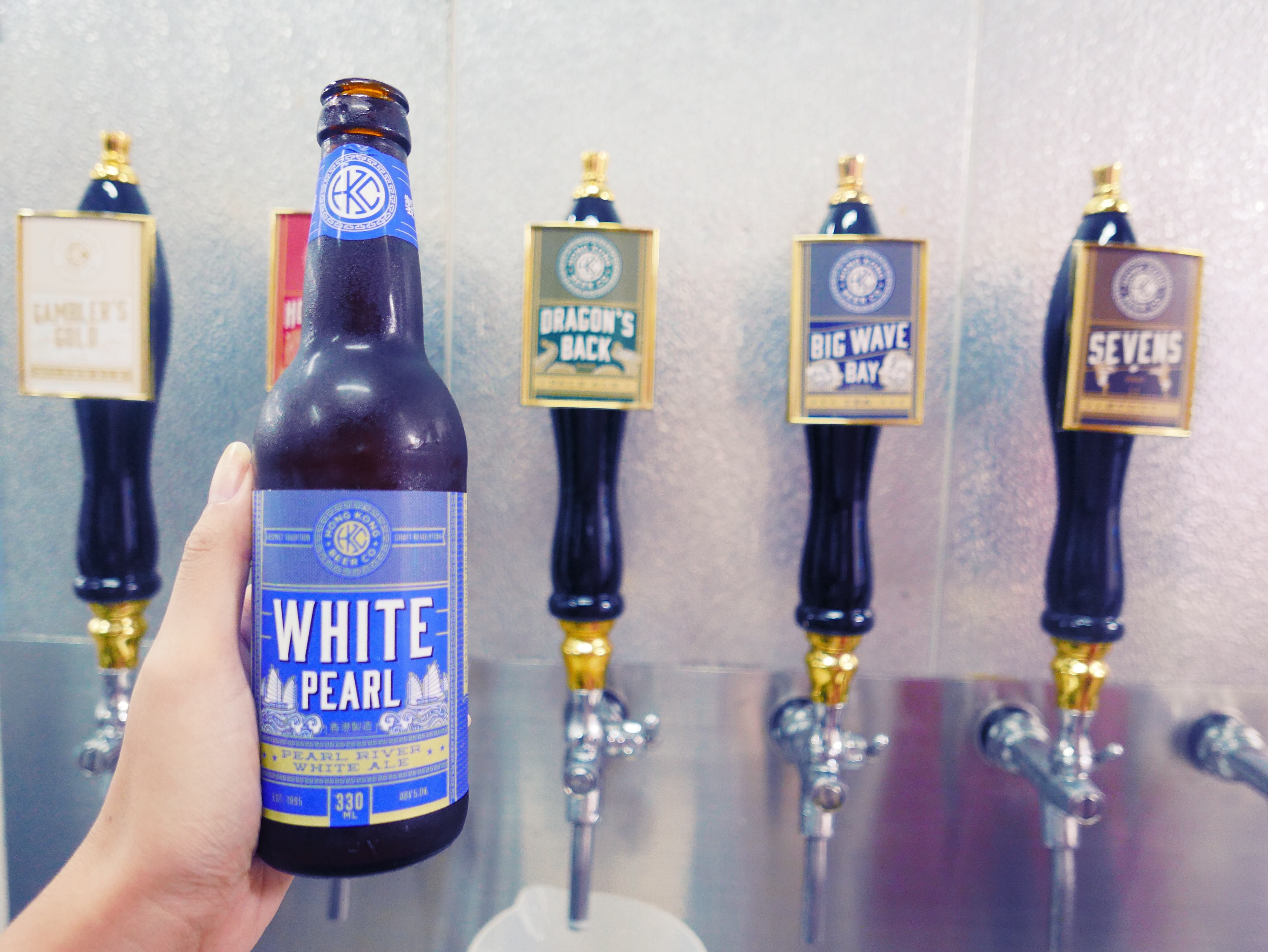 A new addition to the Hong Kong Beer Co. range, the White Pearl River White Ale is a wheat beer with a twist. Head brewer Simon Pesch’s addition of mandarin peels into the wort contributes to notes of tangerine and citrus, giving off a wonderfully sweet aroma. To add to this, the ale had notes of rose from the addition of rose bud. The flavour was what you would expect from a wheat beer, with the wheat malts dominating, finishing with a sweet honey aftertaste. Refreshing and crisp, this was definitely a favourite. 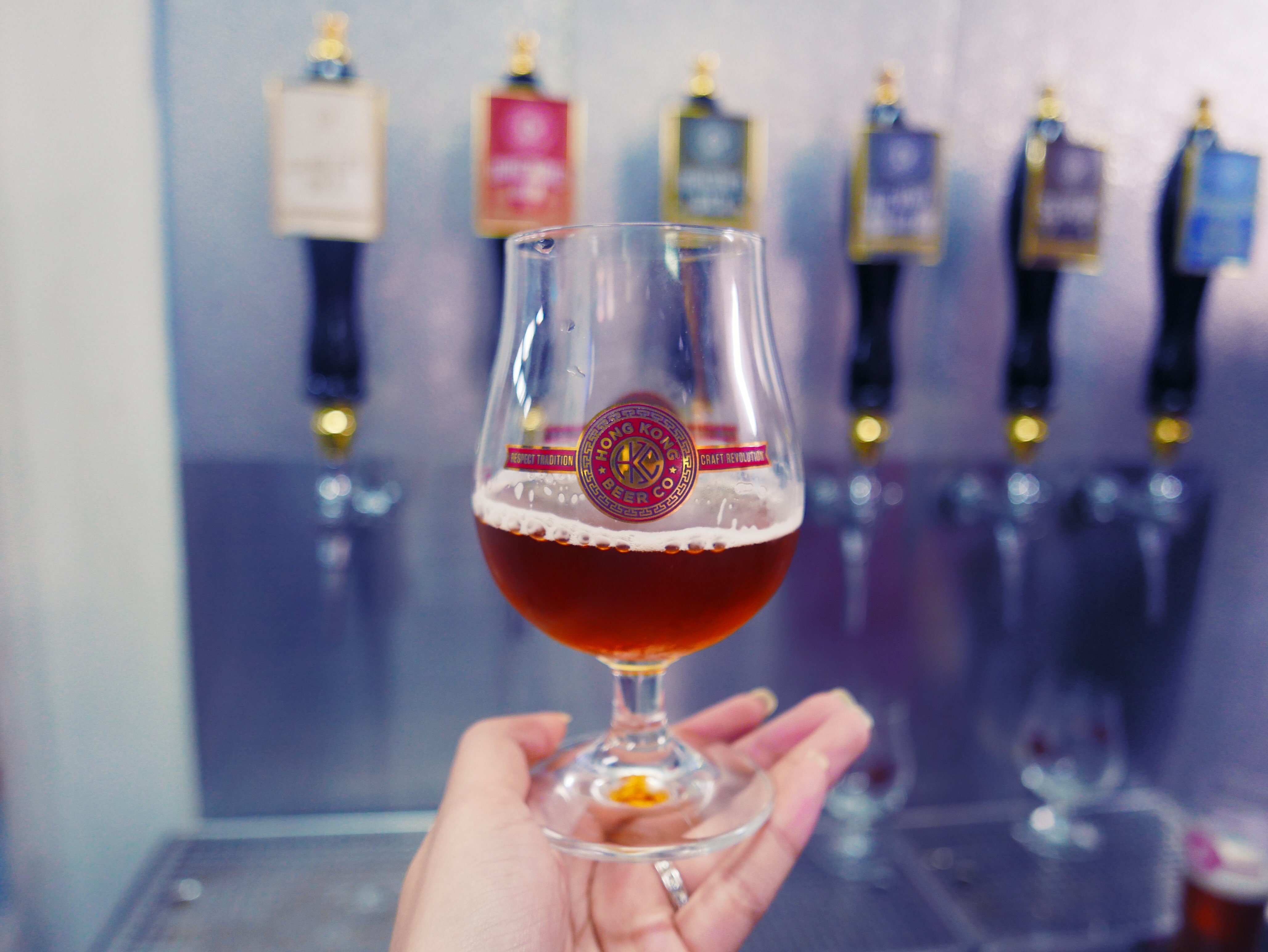 The brewery’s flagship beer, Hong Kong Beer is an Amber Lager. It displays a caramel malt flavour with a slight citrus hop finish. The malty body gives the beer richness without being full-bodied and contributes to a balanced sweetness. The beer would pair perfectly with greasy finger food and bar snacks, such as fries, pizzas and burgers. The lightness of the beer will leave you munching away.

Named after the Hong Kong Island’s most famous hiking trail, the Dragons Back Pale Ale lacked significant aroma, however there were slight hints of apricot and peach. The medium bodied ale had the classic American pale ale slightly hopped flavour of grapefruit with a delicate bitter finish. Definitely not one of the outstanding beers in the range, but nonetheless a solid pale ale for those undergoing a craft beer introduction.

The Big Wave Bay IPA delivers big hoppy notes in this full-bodied ale. With a bitter consistency throughout, the beer is backed up by a tinge of sweetness that provides a great balance for the style. Admittedly not as bitter as a classic American or British-style IPA, this beer does suit the Hong Kong palate. I could imagine this pairing effortlessly with Cantonese barbequed dishes to complement flavours or spicy Szechuan dishes to contrast and cut through the chillies. 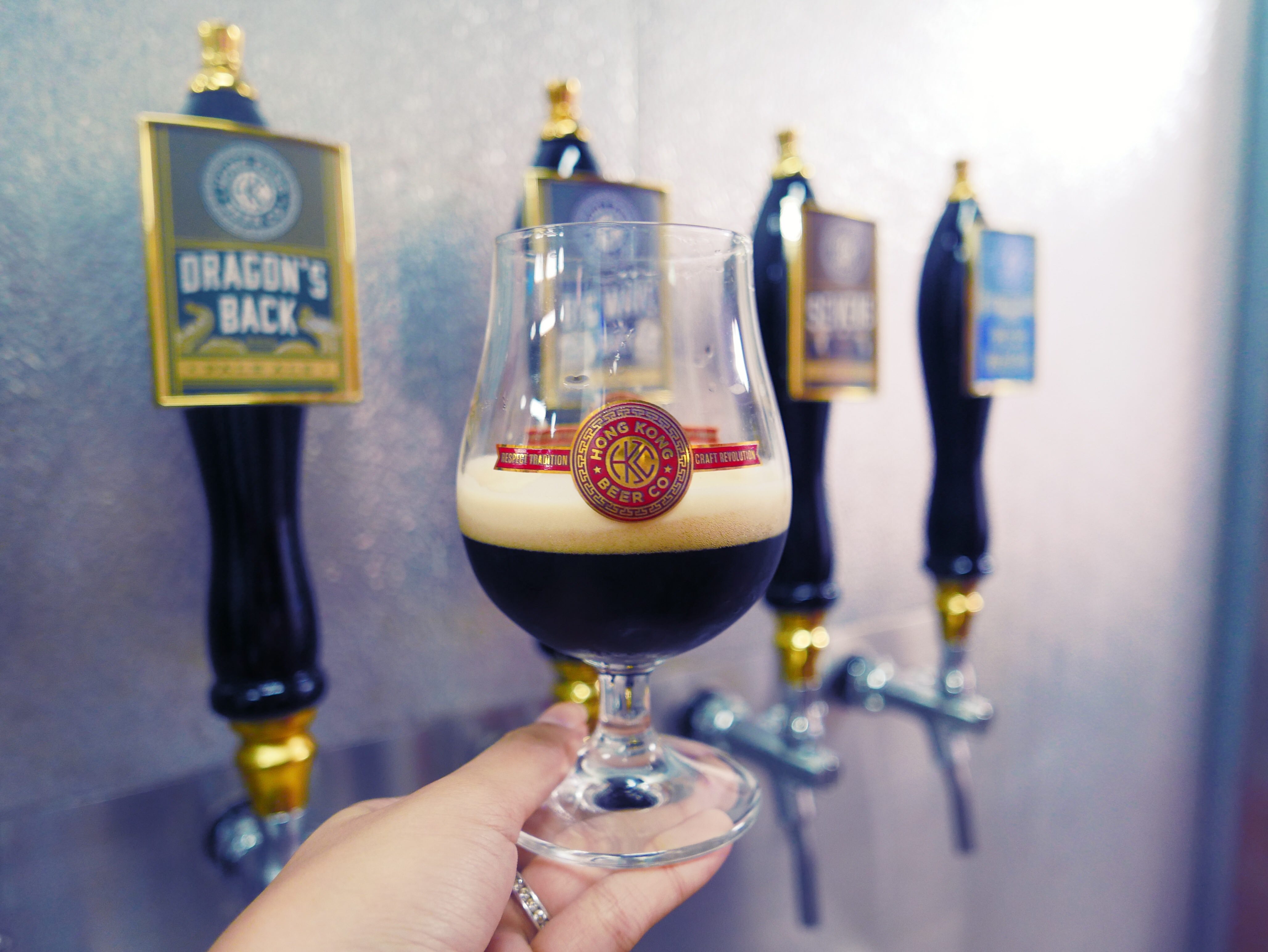 Rounding off the core range, the Sevens Stout comes through with strong aromatic notes of roasted almonds and fresh cocoa beans. Although this is a stout, it is light-bodied with a coffee-like flavour. The oat grains in the brew do come through, with roasty notes, however I would have preferred a much heavier body in order to savour the taste. Light stouts like these are the perfect complement to complex and mature cheeses. They provide a well-rounded and smooth mouth-feel in order to cut through the more complex flavours.

In addition to the core range above, HK Beer Co. has two series of seasonal and limited edition beers. The first one, New Territories Series, are limited edition beers brewed seasonally for selected outlets in the city. The second one is the Crooked Island Cask Series, specifically beers that are cask-conditioned and therefore feature the distinctive carbonation and mouth-feel. On this tour of the HK Beer Co. premises, I was lucky enough to try the Wushu Warrior Wheat IPA. I was excited about the prospect of trying it as I’ve grown to appreciate this particular style in the last two years. In my opinion a very underrated style, we do lack a great variety of these beers in Hong Kong. Having said that, the 10 Barrel OG Wheat IPA (distributed by Beers R Us) is a fantastic offering.

The HK Beer Co. Wushu Warrior Wheat IPA offers strong wheaty aromas with the smell of that hop bitterness in the undertones. The ale is medium-bodied and almost the very classic definition of a wheat IPA, considering the strong wheat grain flavour coming through with citrus and earthy notes. The slight bitter finish is what I enjoy most about the beer, however I would have liked for the bitterness to linger a little longer.

HK Beer Co. certainly are producing some fine ales with a couple of stand-out performers. In my opinion, the beers are aimed at capturing the wider beer drinking market, and in particular providing a stepping stone for those only just switching from the average, watered-down commercial lagers that dominate our city’s’ beverage menus. I believe that under the current leadership their beers can only go from strength to strength as they push the boundaries, continue to educate and challenge the palates of beer drinkers in Hong Kong.