The Steam Hotpot will get you feeling hot, hot, hot

Although the well-known traditional Chinese hotpot, or Chinese fondue, is still beloved in Hong Kong, it seems that the steam variant–the 'steam hotpot’–is gradually becoming a fierce competitor.

Most of us are familiar with the traditional Chinese hotpot, which is a culinary experience where people gather around a table around a metal pot filled with shimmering broth (or soup base) in the middle. Aside from the fact that I am always impressed by how creative you can go with the soup base, the large variety of food around the pot that you use to cook with is fascinating (ranging from raw meats to veggies, tofu to noodles). For the steam hotpot, the setting and ingredients are the same. The only difference, as the name already suggests, is that instead of putting all the goodies into the pot, you spread them out on a steel steam-plate with holes that is put over the pot. The moisture from the broth will escape via the holes to gently steam and cook your food that is placed above it.

As a hotpot lover, you can imagine how excited I was to try out this new invention. Although it is 100% do-it-at-home friendly, I couldn't resist to make optimal use of the convenience from having a steam fondue private kitchen in my neighborhood called ‘Steam Hotpot  蒸蒸日上’ .

Just as the hotpot encourages the experience to be a real communal meal, I invited some friends to join me on this new eating adventure. While sharing with you my experience with the steam hotpot in general, I am more than happy to also give you my impression of the private kitchen ‘Steam Hotpot  蒸蒸日上’ in case you are considering trying the Steam Hotpot establishment instead of making it at home.

As creative as I said you can go with the soup base, the ingredients for this steam fondue at the private kitchen are rice, meat and dried vegetables. They not only form a unique taste combination but also serve a secondary purpose, which I found so thoughtful and efficient. Can you guess what it is? The rice while shuddering for a few hours serves as seasoning for the broth, will result in congee that can be eaten after the fondue! 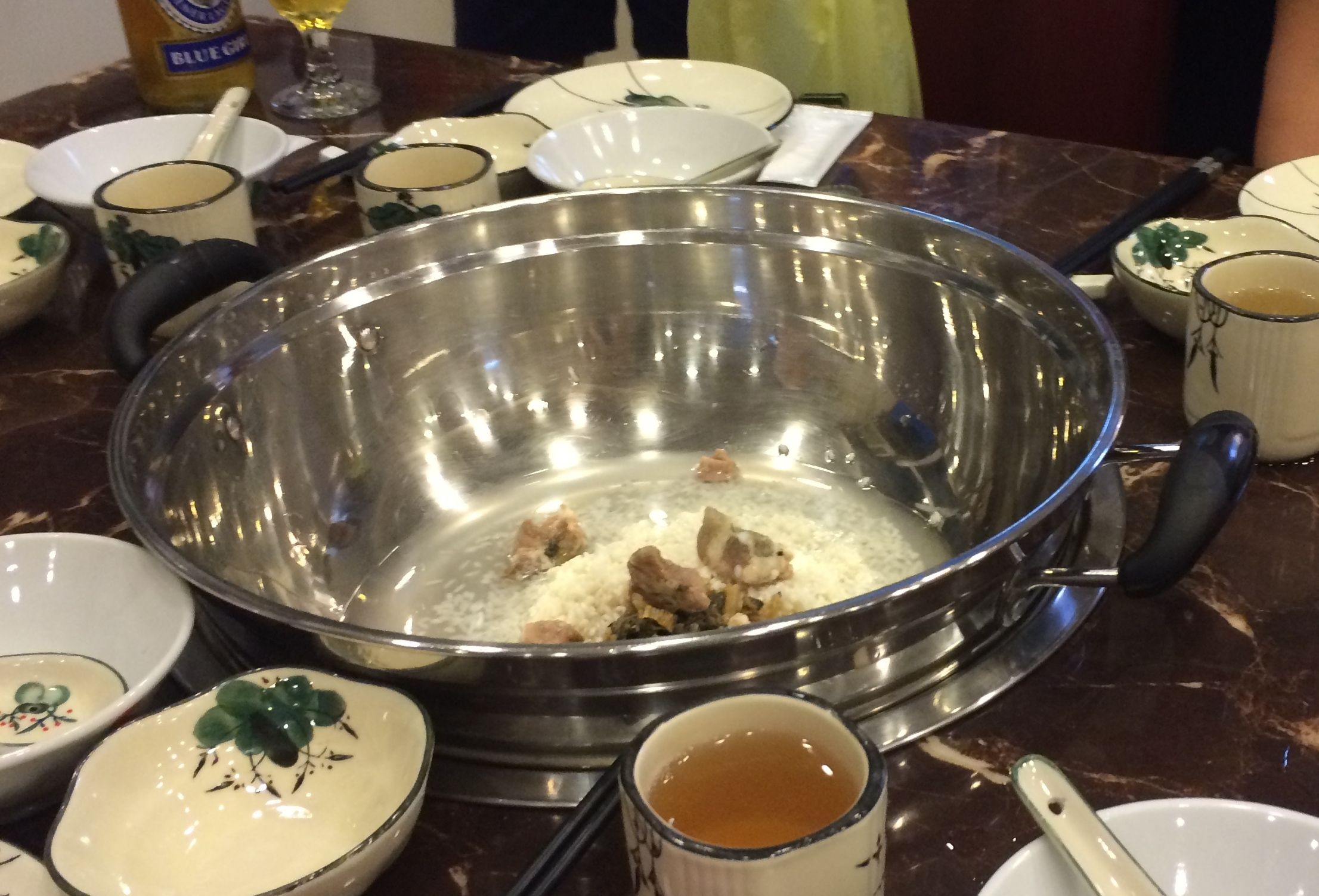 Since it is a private kitchen, the location is a bit exclusive and there are only 5 tables, one of which  is located in a private room. There is an open kitchen where a worker is slicing and preparing the ingredients. Unlike many eateries in Hong Kong, this place serves tea of dried jujube dates & longan berries tea instead of traditional Chinese tea. Also, on the table, there is a plate of spices to season the soy sauce dressing that serves as dipping sauce for the food. To prevent over-cooking, every time a batch of ingredients is being cooked a watch is used to control the time, and the waitstaff was also very responsive in turning down the temperature of the burner after the cooking time had passed. 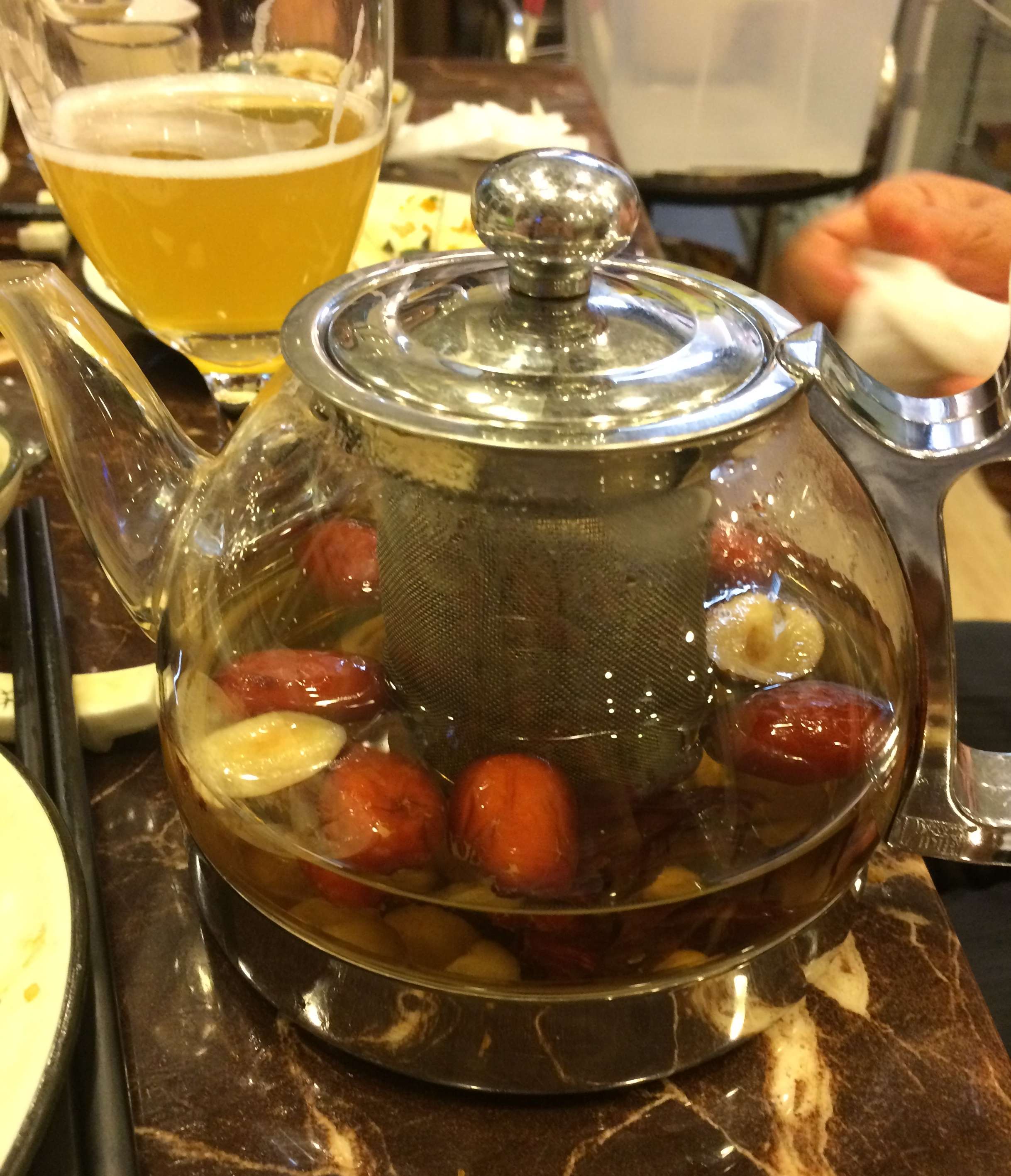 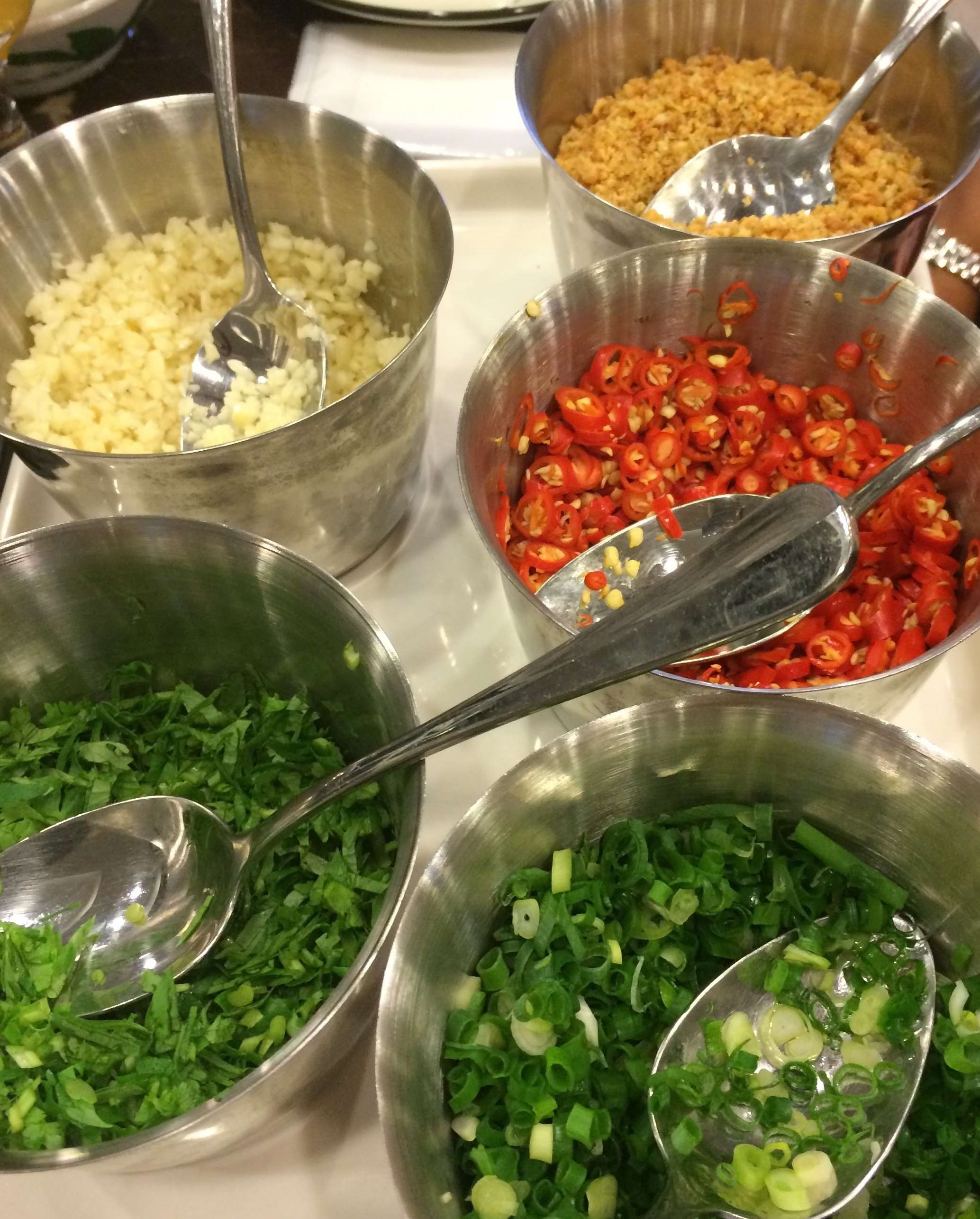 We opted for a menu which came with a predetermined variety of seafood, chicken, beef, vegetables and meat balls. 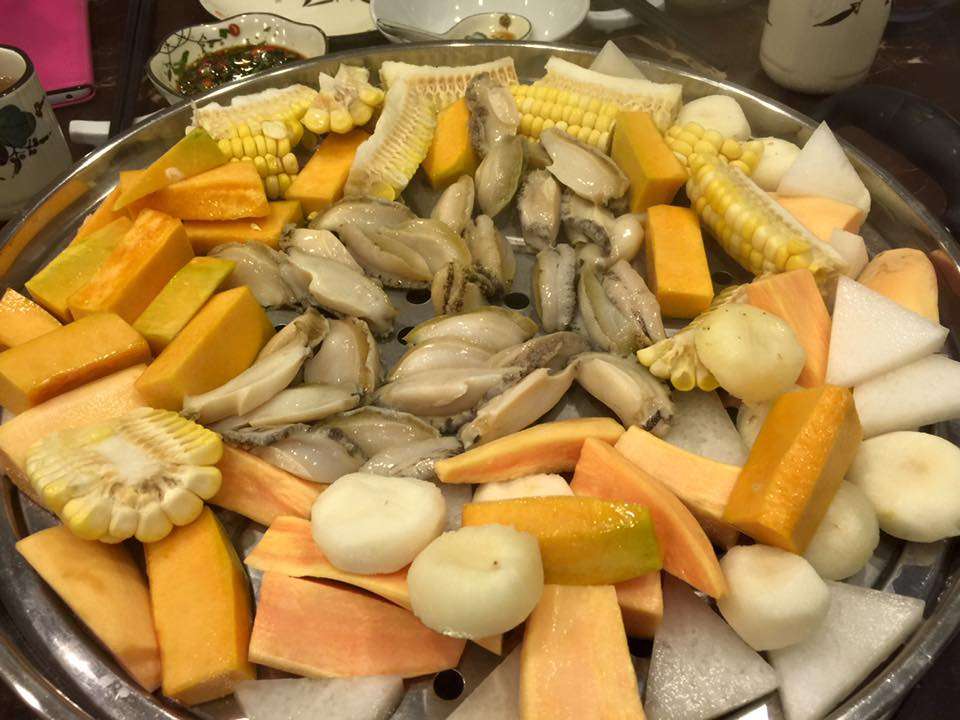 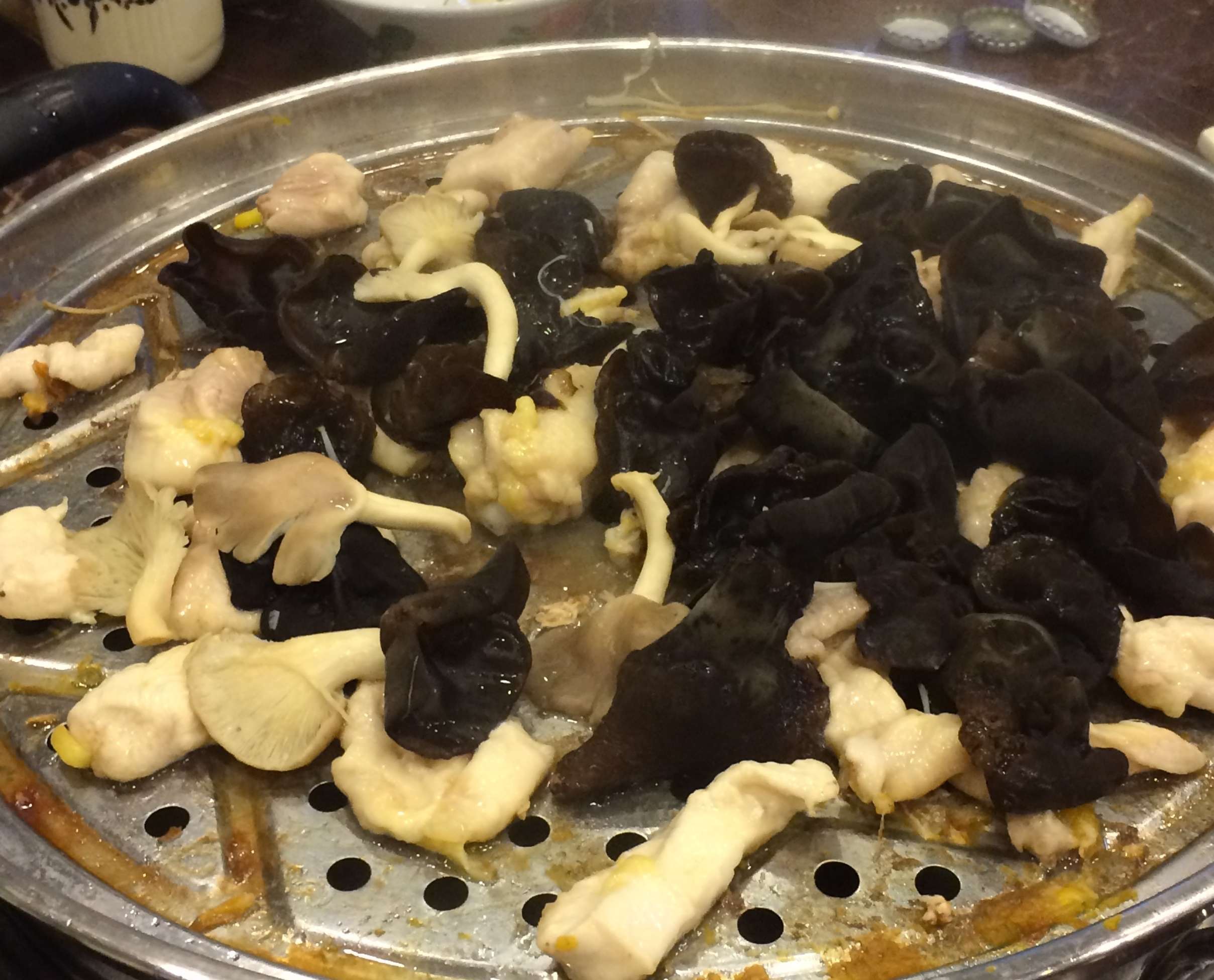 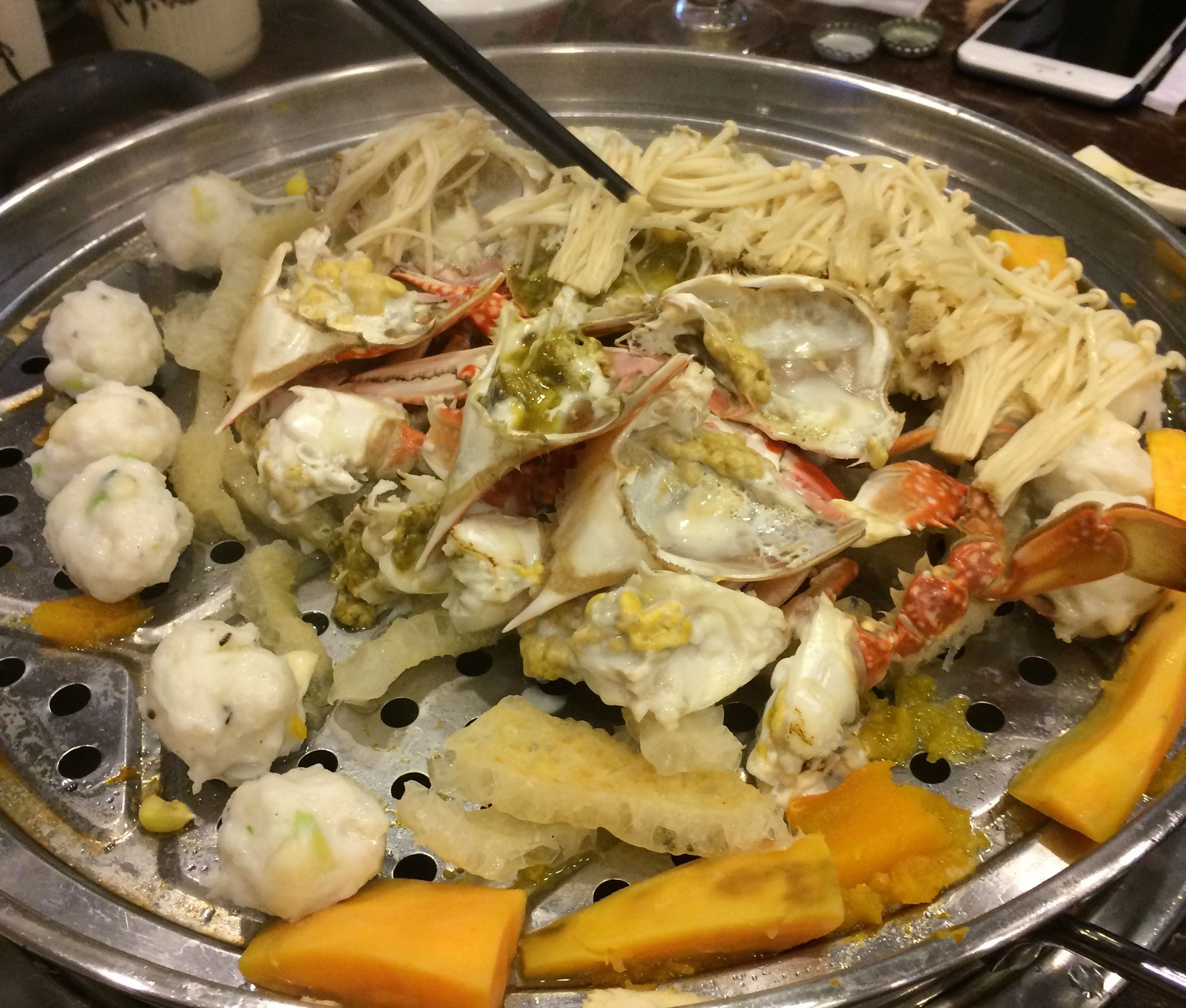 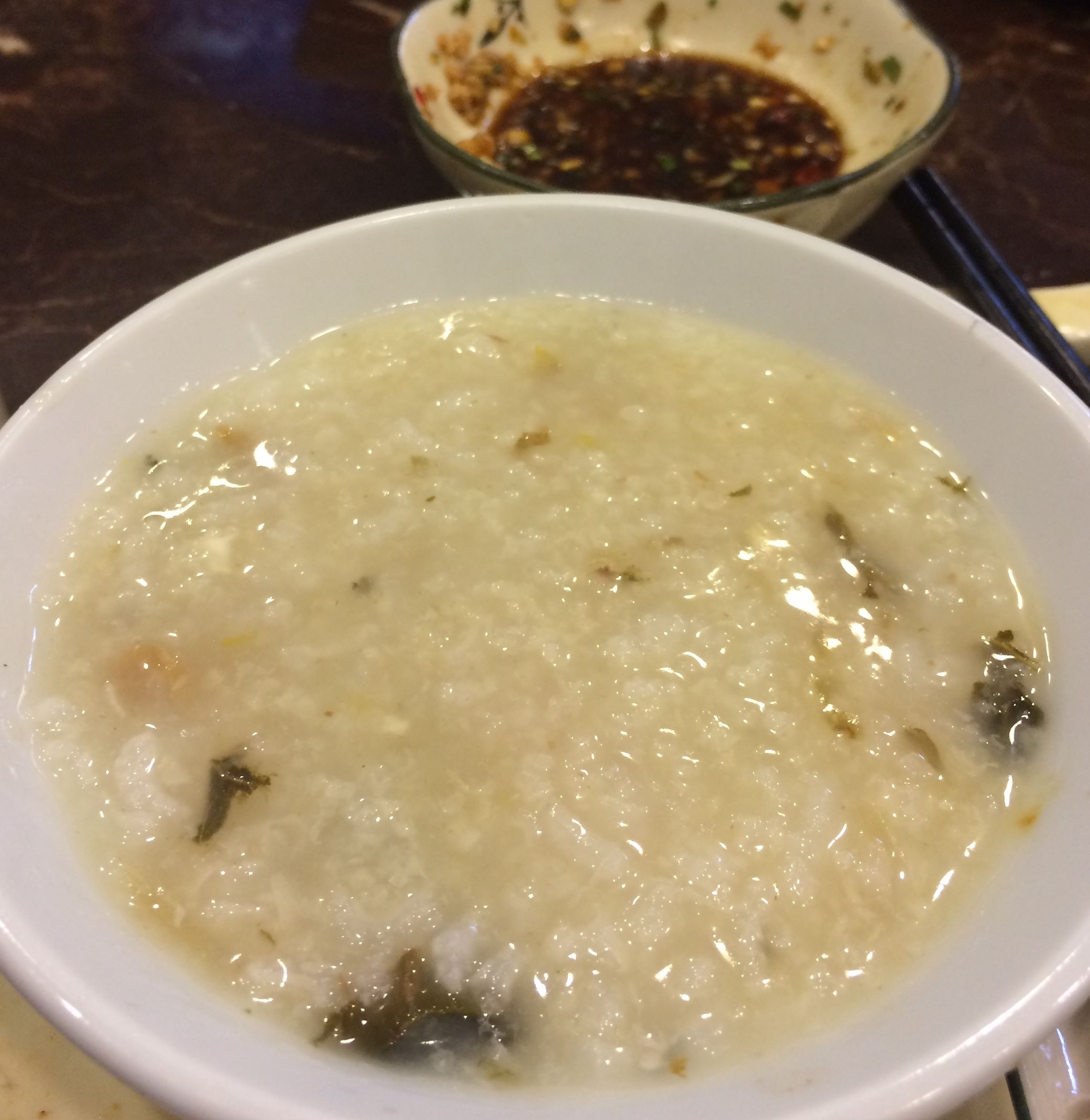 As compared with the traditional Chinese hotpot, the steam Chinese hotpot does a better job in keeping the natural taste and texture of the ingredients while still enabling you to taste the subtle flavour of the soup base. While this is often considered a benefit, there always will be some people for whom the intensity of the natural flavour doesn't really matter. For the simple reason that they will dip it into their own composed sauces anyway and sometimes the preference is even to purposely cover the natural taste with a thick layer of sauce.

Besides the taste and texture, the nutrients in the food also remained while the steam of the broth gradually cooked the food, rendering the steam hotpot to be a healthy option. Currently, with many people attaching great importance to a healthy lifestyle, the steam Chinese fondue provides an optimal solution.

But just as with almost every advantage there also can be a downside. Although during the cooking process of the traditional hotpot the nutritional value of the ingredients will reduce and even get lost in cases of over-cooking, the act of dipping your chosen food into the soup base and then letting it simmer awhile before ‘reaping the harvest’ does form an experience the steam version cannot accommodate for.

Overall, the steam Chinese hotpot gave me a very satisfying culinary experience allowing me to enjoy the ingredients’ natural flavours by just cooking them with the steam of the broth. Not only does the soup base remain in its initial state after the fondue has finished; as the juice from the food escapes via the holes to the pot, in the end it became even a richer and more savoury soup or… congee as at private kitchen ‘Steam Hotpot  蒸蒸日上’!

HK$ 430.00 per person for the extensive pre-set menu with seafood, meat and vegetables that my friends and I have ordered. The price is subject to changes. Instead of a complete menu, you can also choose to order the ingredients of your choice separately.