With restaurant favourites such as pizza and pasta coming to mind when thinking of iconic Italian foods, you can forgive those who may not know exactly where in Italy a certain food originates or what else might be on the menu.

To demonstrate the broad varieties of Italian foods available, TravelSupermarket have photographed each region‘s most delectable ingredients on the Italian map to give a better insight into which foods make up this great culinary nation. 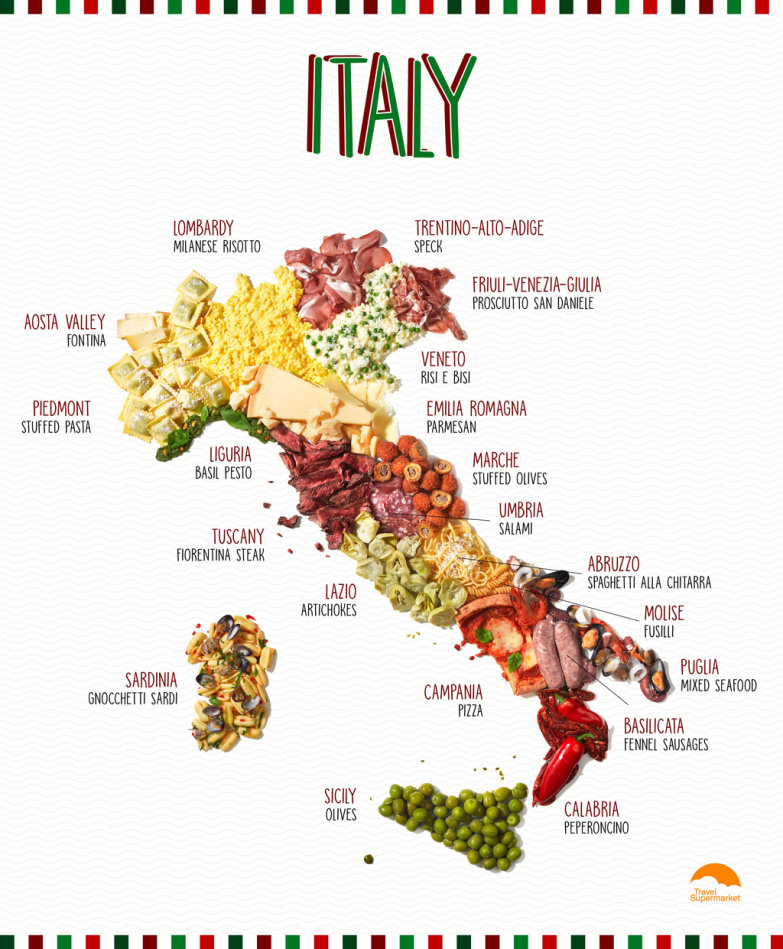 Spaghetti alla chitarra is an egg pasta made using a chitarra, which looks similar to a square guitar, to cut the pasta. Pasta makers push the dough over the tight strings, cutting the pasta into long, square-like strands. It‘s served in the region with traditional Abruzzese meatballs.

This nutty and woody cheese is created from the milk of the local red spotted cows that call this region home. During the summer months, the cows are moved to higher altitudes, which is thought to give Fontina its signature flavour. Consider trying it in zuppa valdostana, a soup made from cabbage and this flavourful cheese.

This delicious sausage is flavoured with fennel seeds foraged from wild fennel found in the rural region, as well as chilli, which is consistent in southern Italian cookery. Intensely aromatic, it is a product all Italians are proud of despite its humble beginnings.

Found in the “toe” of Italy‘s boot, the hot climate of Calabria is home to a fiery chilli that is prevalent throughout southern Italian food. Used heavily in traditional Calabrian cured meats like ‘nduja and soppressata, it is also found in classic breads, pasta dishes and even in types of cheeses.

One of the most well known of all Italian foods, pizza started as a street-food snack for the poor. As trade in port towns increased over the centuries, the toppings got more exciting. It is said that pizza margherita was created in 19th-century Naples to honour Queen Margherita – the red, white and green being the colours of the national flag.

Being produced in this region for over eight centuries, Parmesan must be matured for a minimum of two years, giving it its distinctive flavour. Being such a treasured ingredient, every year the cheese is celebrated in various festivals throughout the region.

Prosciutto di San Daniele can only be called so if produced in the hills around the town of San Daniele. Cured in local sea salt, this local pork product is generally sweeter than its equally famous counterpart, Parma ham.

The Italian capital of Rome is home to local delicacies such as carciofi alla Romana and carciofi alla Giudìa, both authentic artichoke dishes. Artichokes are grown in the countryside of Lazio and are most often prepared in the springtime, symbolising prosperity.

Pesto alla Genovese is called so as it is traditionally made in the capital of this region, Genoa. Most commonly served with the the pasta trofie, locally grown basil and olive oil are pounded in a mortar and pestle to create this popular Italian sauce.

Coming from the region’s capital, Milan, risotto alla Milanese uses local risotto rice and saffron. The dish is said to have originated when the glassmaker crafting the stained-glass windows of the famous Duomo cathedral celebrated his daughter’s marriage. He was using saffron to stain the windows yellow and so it appeared in his daughter’s wedding banquet, making the risotto a striking colour.

Originating in the town of Ascoli Piceno, these delightful olives are stuffed with meat and then deep-fried. Olive ascolane can be found in every bar in the city and vary with their fillings – some with sausage, others with veal.

Considered one of the world‘s most famous pasta shapes, fusilli comes from the small region of Molise. Originating from the Italian word meaning “to spin”, traditionally this pasta was made by winding dough around knitting needles. It‘s often served with ragu-based sauces as the pasta is perfectly shaped to trap the succulent meat and sauce.

Sometimes stuffed with meat, other times with vegetables, cheese or fish, the stuffed pasta from the region of Piedmont is truly something to sink your teeth into. Often served with sage butter or simply with the juices from the filling, the local people are justly proud of this culinary masterpiece.

Often referred to as the Maldives of Italy, seafood from the region of Puglia cannot be beat. Freshly caught seafood can be eaten raw straight from the pier as ”sushi Pugliese” or sometimes even in the form of an octopus bap, which is exactly as it sounds: grilled octopus in a bun.

Found on the tables of weddings, christenings and festivals, this shell-shaped pasta is made from locally grown semolina that is finely ground to make into a dough. It‘s served with either a sausage-based ragu or local clams.

With local olive varieties such as the Nocellara del Belice from the Belice Valley taking on a bright green hue and buttery texture, the volcanic soil around the hills of Mount Etna is thought to give these olives a unique fragrance. They‘re often still hand-picked to this day.

The largest breed of cattle in the world, Chianina cows have been bred in the region of Tuscany for up to 2,000 years and are still used for farming. Bistecca alla Fiorentina is a particular favourite dish made up of a T-bone steak cooked over coals and served rare. It is common practice for the chef to show a customer his steak before it‘s cooked.

Speck, a word originating in Germany, is a ham that combines Mediterranean curing with the Northern European practice of smoking to give it its signature flavour. Prized by locals to such a massive degree, Speckfest takes place every autumn in the foothills of the towering Dolomites.

The pigs in this region roam free and are considered some of the highest quality in the world. The salami made here is often created by hand using ancient practices. Umbria is thought to be the birthplace of pork butchery in Italy, producing some of the world‘s best salami varieties.

Often mistaken as pea risotto, this rice dish is prepared to celebrate the Feast of St Mark. Made from recently sprouted peas and locally grown rice, this medieval dish is the perfect middle ground between risotto and soup and is often served in the springtime.