There are many Italian restaurants in Hong Kong. Most Hong Kongers will have their favourite spot, whether it’s an authentic hole in the wall with chequered tablecloths or a Japanese-Italian fusion diner. When we heard about Spiga, under Dining Concepts, we were intrigued to learn what the new restaurant would bring to the Italian dining scene here.

Our hopes were high as the restaurant is two-Michelin-starred chef Enrico Bartolini’s first restaurant outside Italy. When he was just 29, he became Italy’s youngest Michelin-starred chef, and his youthful, innovative approach to cuisine continues with Spiga, which he named after the ‘ear of wheat’ that is representative of cultural and nutritional wellness. His goal, we were told, is to serve modern interpretations of Italian dishes in an authentic ‘what Italian people are eating in Italy’ kind of way.


We visited on a quiet weekday evening and were blown away by the textured design of the restaurant, inspired by Italy in the 1950s. While the space is large with 132 seats, it’s skilfully split into different areas: a bar, booths, private dining rooms and a main dining room with communal tables. The lighting is warm and complements the cut glass, vintage chandeliers, velvet curtains, Lucite and muted, jewel-toned touches. An impressive first impression, perhaps unsurprising as it was designed by Joyce Wang. 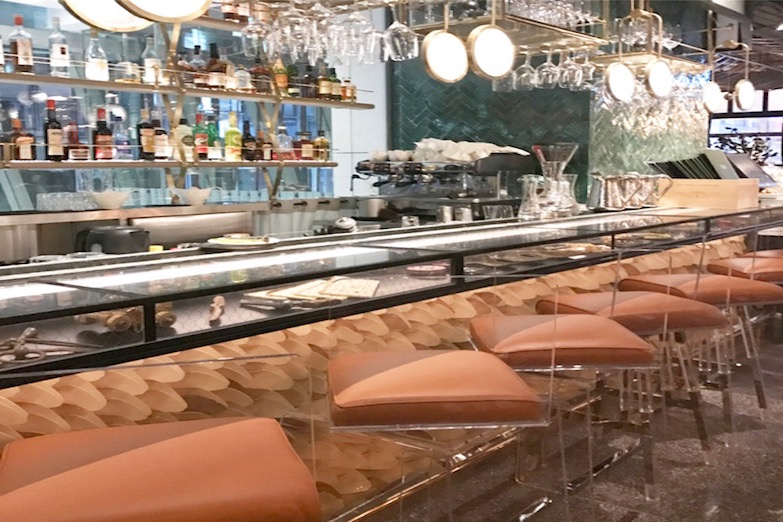 As for the food, what did we tuck into? 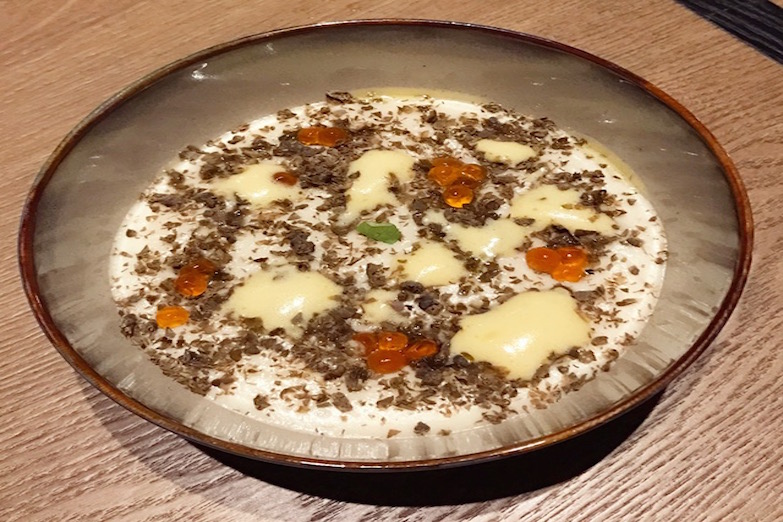 We ordered a version of the tasting menu ($788 per person), which started with the patata uovo e uova. A magical bowl of potato cream topped with salmon roe and lemon zabaglione sauce was placed before us, and we scooped it up way too quickly. Rich and textured, we learned afterwards that this winner is one of the signature dishes served at the chef's restaurants in Italy. 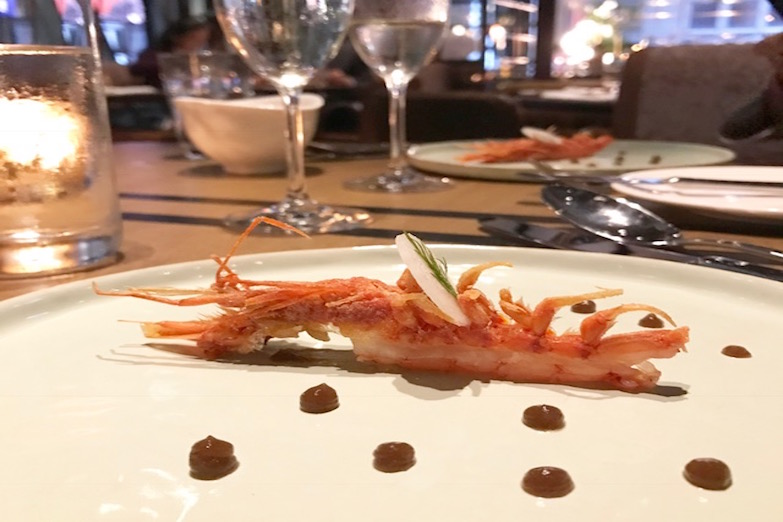 Much has been written about the gambero mezzo fritto con salsa al tamarindo. A Sicilian red prawn had its head and tail fried, but its body was left raw. The prawn itself had such a rich flavour – the contrast of textures was a wonderful way to eat this treat. The tamarind sauce added some lovely umami-ness to the dish. 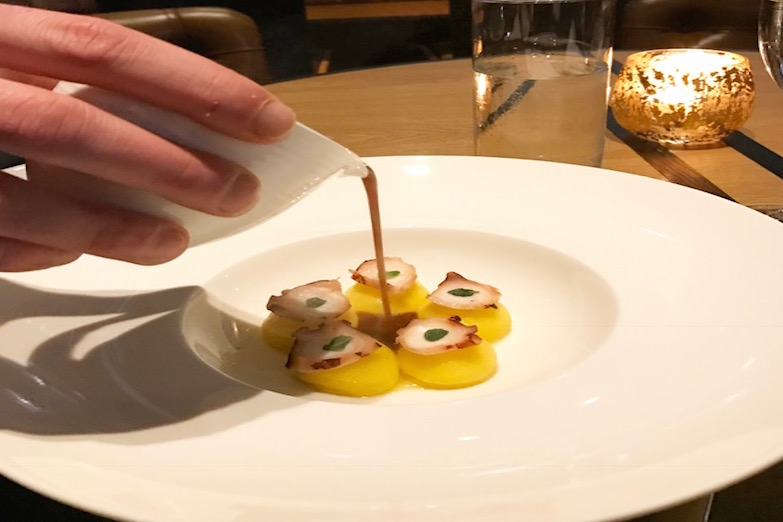 No Italian meal is complete without some pasta, and the bottoni di olio e lime con salsa cacciucco e polpo did not disappoint. Five little button-shaped pastas were filled with a creamy lime emulsion, topped with roasted octopus and poured over by a house-made cacciucco fish sauce. Simply put, there was not enough of this – we could have happily eaten double or triple the serving. The contrast of the lime with the fish sauce was unexpected and refreshing. 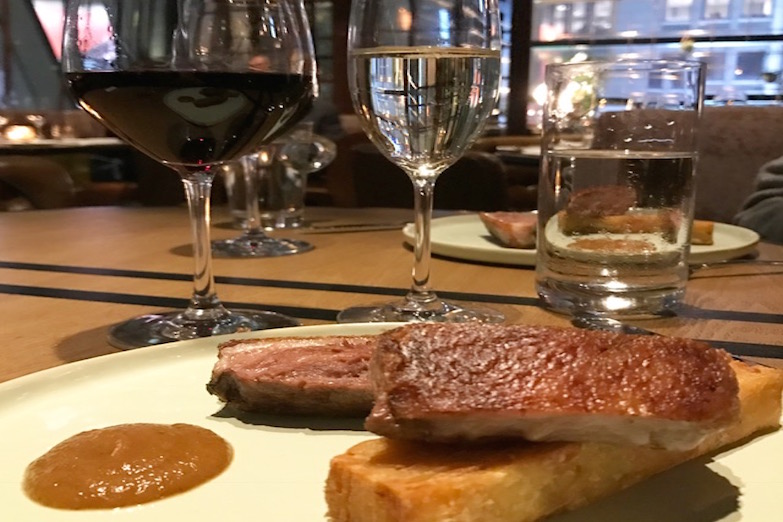 As per Italian tradition, our pasta dish was followed by a meat course. In our case, this was the guancia croccante con millefoglie di patate alla senape. The pieces of veal cheek were gloriously tender, with a crunchy layer of fat on top – absolutely melt in your mouth. The accompanying side of millefeuille potato was a unique way to include a starch. Call us greedy, but our only complaint here is that we would have liked a little more sauce to accompany our meat and potatoes. 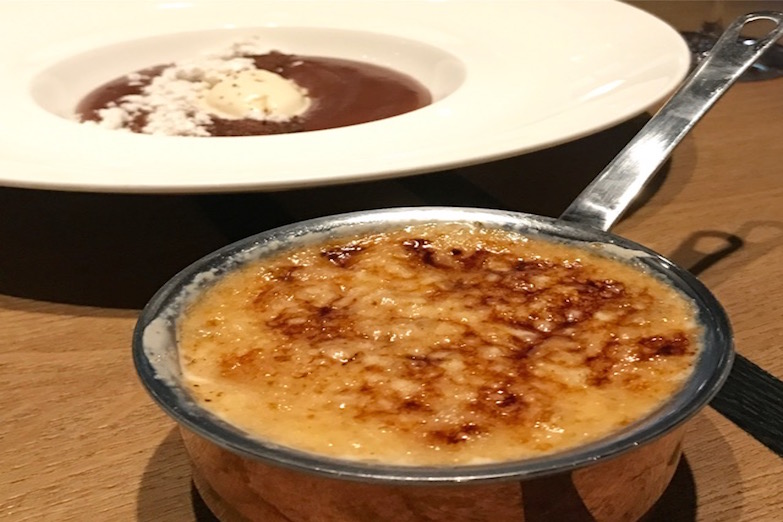 For dessert, we tried the crema bruciata con ciliegie, meringhe e mirtilli ghiacciati (crème brûlée) and cioccolato soffice con gelato alla nocciola (chocolate foam). Most everyone knows what crème brûlée looks and tastes like, but most will be surprised by this interpretation. Instead of the ‘crack’ of the burned sugar layer leading to a thick custard, a tap on the crust of Spiga’s version revealed an airy, foamy custard sat atop cherries, pieces of meringue and iced blueberries. A light yet sinful way to end the meal, though – again – we could have polished off double the portion. The chocolate foam with hazelnut ice cream was also tasty.

We’ll definitely be back! The food was delightful, definitely living up to our expectations, and the tasting menu was a wonderful treat. The lush main bar would be a great place for a more casual pizza and drinks night. We've also heard good things about their semi-buffet lunch and are especially eager to try the ossobuco with saffron risotto. And with interiors like these, we bet Spiga will soon be booked up for more celebratory dinners – they’ve already hosted an engagement party and have been booked for a wedding dinner.