A 20-year anniversary is cause for celebration in itself, but when it’s the 20th birthday of a restaurant in Hong Kong, well, its longevity is a thing of almost saint-like reverence. Long-standing Spanish stalwart Olé is taking a stroll down memory lane with its newly launched brunch menu, filled with a staggering number – 20! – of its customers’ all-time favourite dishes, priced at the unbelievably reasonable price of $380 per person. Say what?!

Now, 20 dishes is no mean feat, and authentic Spanish flavours, fresh ingredients and traditional recipes are a given when delving into what makes up the core values of Olé’s food. We decided that we needed a taste of each and every one to find out how they have withstood the test of time in a culinary landscape as volatile as Hong Kong’s. It took us several hours to plough through this banquet-like meal – boy, was it worth it. Let‘s get started.... 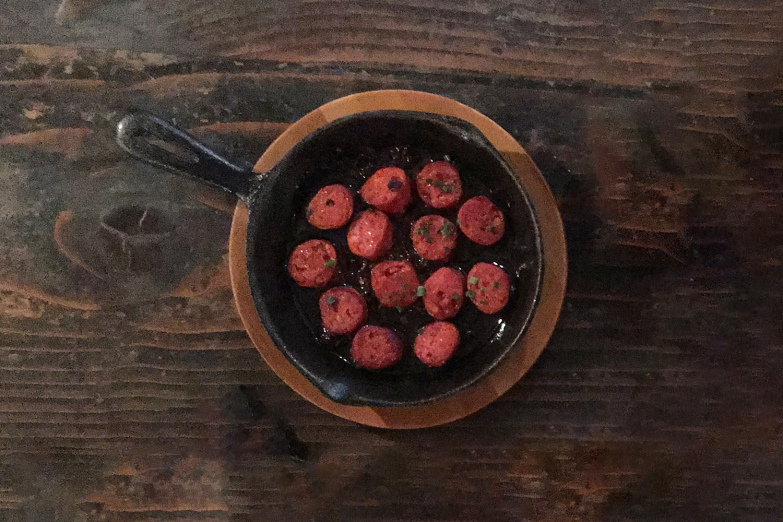 20. Sautéed chorizo with garlic and chives

Sorry, chorizo, we desperately wanted to love you, but you were just a tad too oily for us. 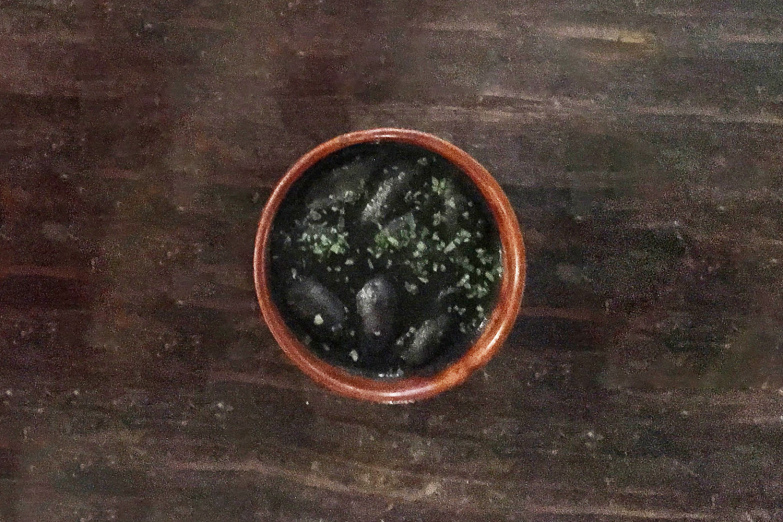 A packed dish of baby squid as black as my soul. Aesthetically, nothing speaks to me more. But, alas, these shrimp and almond-stuffed baby squid, served in their own ink sauce, just didn’t do it for us. The briny flavour was slightly too overwhelming, like being slapped in the face with the full force of the ocean, and the texture reminded us of rubber. 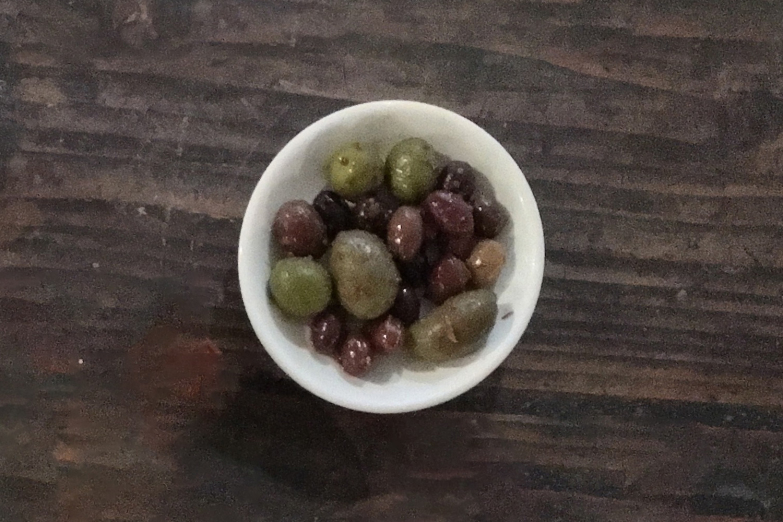 We actually loved these as a perky starter, but at the end of the day, in the face of a brunch that boasts a total of 20 dishes, they’re just olives, aren’t they (albeit freshly imported olives from Spain prepared Andalusian style with paprika, cumin seeds, lemon and garlic)? 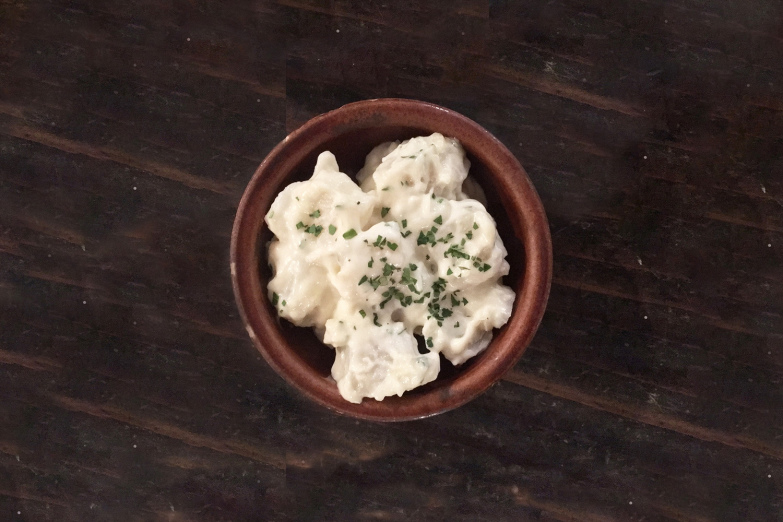 Nope, that’s not a typo. We may spell it “aioli” in English, but the traditional Spanish sauce takes its name from its ingredients: garlic (all) and oil (oli). High marks for full potato coverage, extremely creamy aioli and firm-to-the-bite, non-greasy potato chunks. We enjoyed this one. 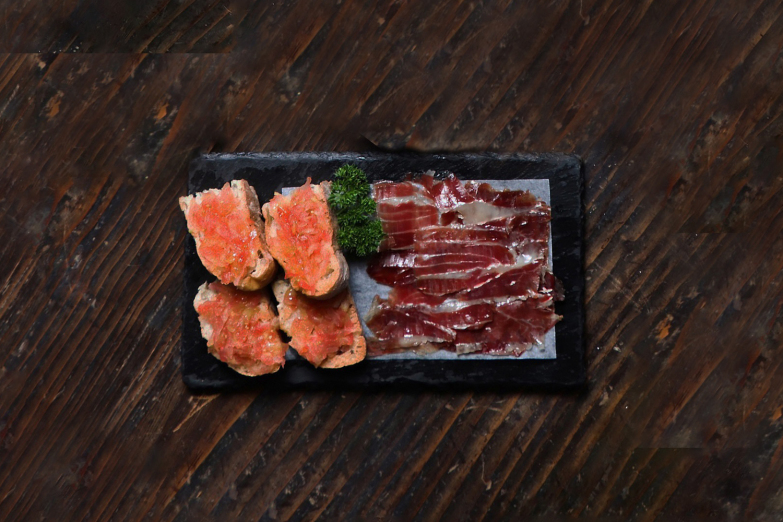 There is nothing not to love about Spanish Ibérico ham – no exceptions here at Olé. Paper-thin slices of knee-weakening ham made for quickly devoured snacks at our table. The accompanying tomato-coated bread, however, didn’t leave much of an impression. 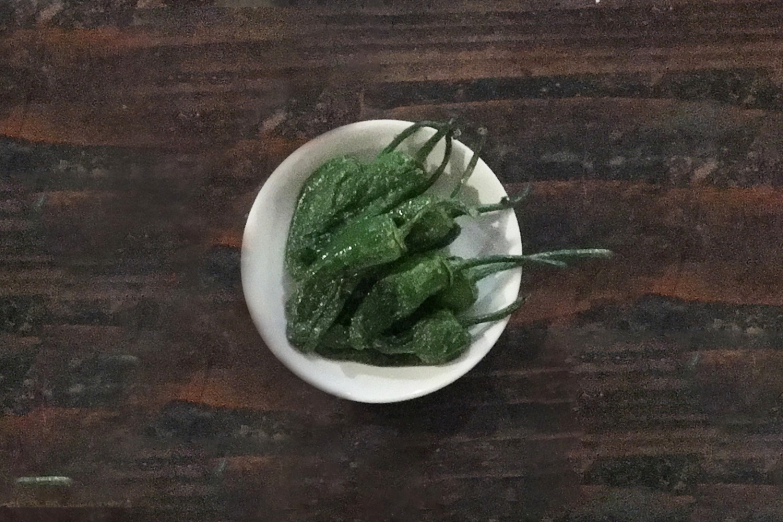 Don’t fear, these peppers aren’t even remotely spicy. What they are is perfectly blistered on the outside, soft on the inside, well seasoned and an addictive, straightforward starter to whet our appetites; we were hooked in an instant. 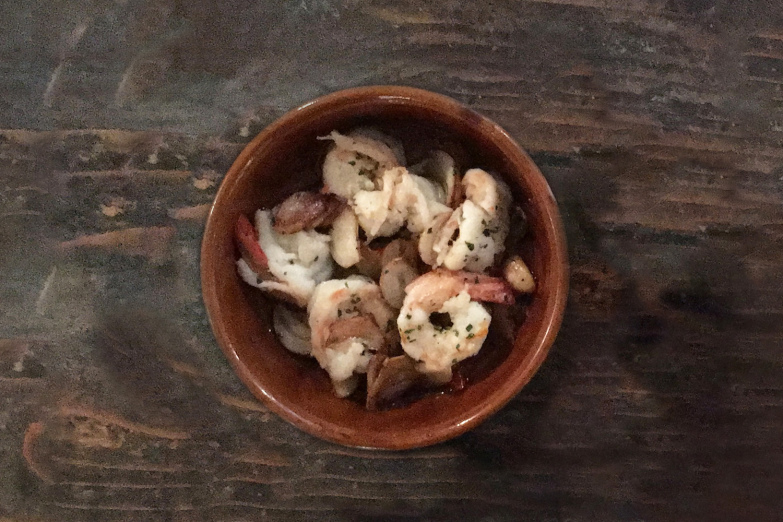 Plump and juicy, these fresh prawns are prepared in traditional Spanish terracotta pots and served sizzling at the table. This reliable and simple recipe consists of olive oil, garlic, onion and our favourite crustacean. It was an aromatic dish full of flavour and generous in portion, albeit a bit too oily. Then again, it was dunked in a bath of olive oil, so we can’t say we didn't expect it. 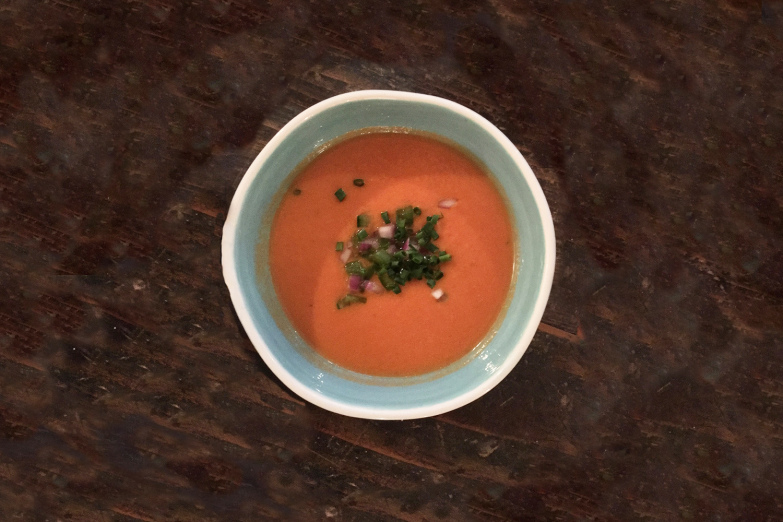 Cold soup may not be for everyone, but the chilled taste of gazpacho ranks high on our list, especially in the summertime. We love the intense garlicky notes that make a strong stand amongst the sweet, refreshing flavours of cucumber, red bell pepper and onion. Olé’s gazpacho follows a traditional farmer’s recipe that blends hard-crust bread into the soup and uses mineral water, olive oil and tomato to creative a rich, creamy texture. 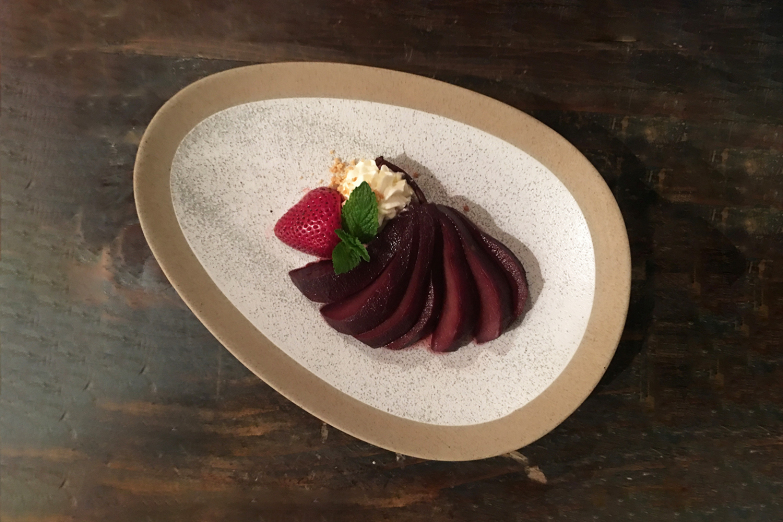 Wonderfully simple plating meets complicated, rich flavours. Served with a dab of cream, these poached pears were just sugary enough to balance out the richness of the red wine. 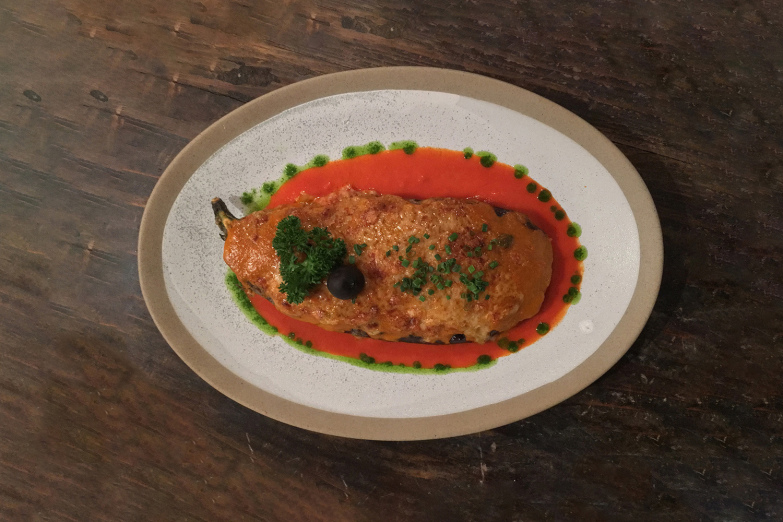 While Olé's not quite the right destination for a vegetarian palate, they do plan for emergencies. A southern Spanish creation by Executive Chef Jesus Pascual, this dish of halved and hollowed-out aubergine is stuffed with more aubergine, red bell pepper and mushrooms. Mousseline sauce is added – think of it as a luxurious, richer hollandaise sauce – then baked until tender. Topped with melted cheese and tomato sauce, this colourful dish held its weight against Olé’s seafood-centric menu.

We‘re at the halfway mark now, and this is where the rating gets tough... 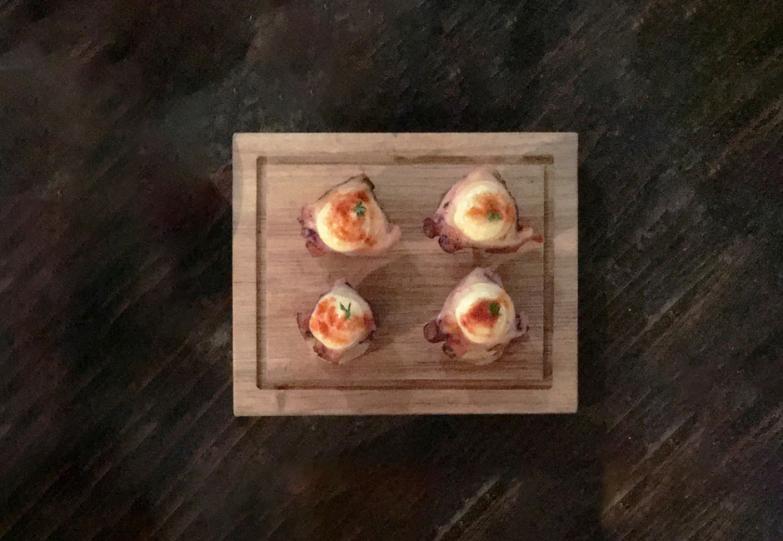 We’re always looking forward to these unique, bite-sized parcels when we pay a visit to Olé. A rollercoaster of textures – from the softness of the potato base, to the chewy firmness of the octopus, to the creamy aioli on top – makes this dish a triumphant success. 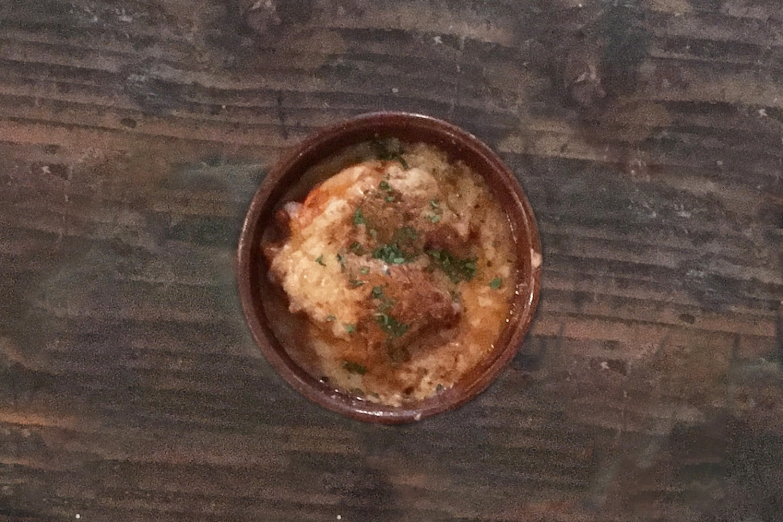 This dish is not a looker, but it made up for its appearance with its excellent execution. These piquillo peppers from Spain are stuffed with a filling of cod marinated in flour, butter and white wine, then baked in a blanket of cheese and homemade red bell pepper sauce. Served piping hot, the cod flaked apart at the touch of a fork and the flavour was subtly sweet. 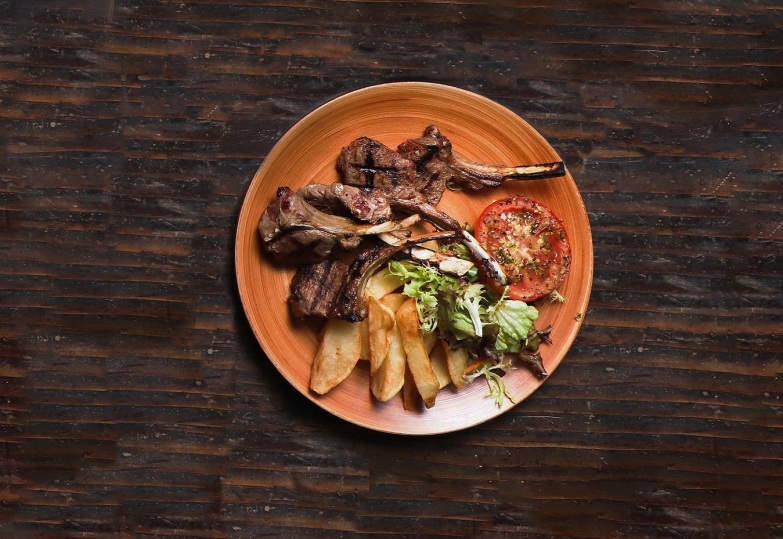 There’s nothing fancy about the preparation of these New Zealand baby lamb chops – no unique herbs, no elaborate prepping methods – but that’s because the raw meat is already so impressively aromatic that all they need is a thorough sitting on a traditional Spanish parrilla (grill). Olé served them up tender and juicy, full of smoky and gamy flavours, with a side salad and thick-cut fries. 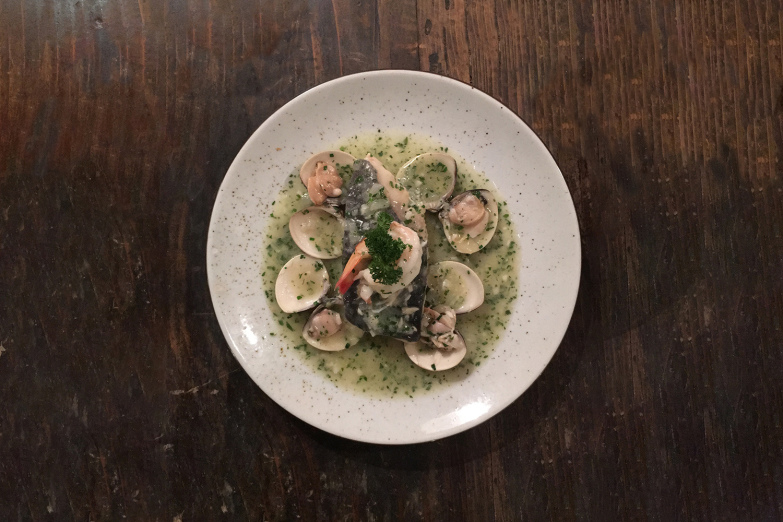 When are fresh clams not delicious? Olé takes inspiration from the Basque country with this fragrant oceanic dish of breaded Alaskan black cod fillet served on a bed of clams. Bathed in a green sauce made of white wine and a peppery, garlicky fish stock, the cod is slow-cooked on low heat to create an especially tender texture. 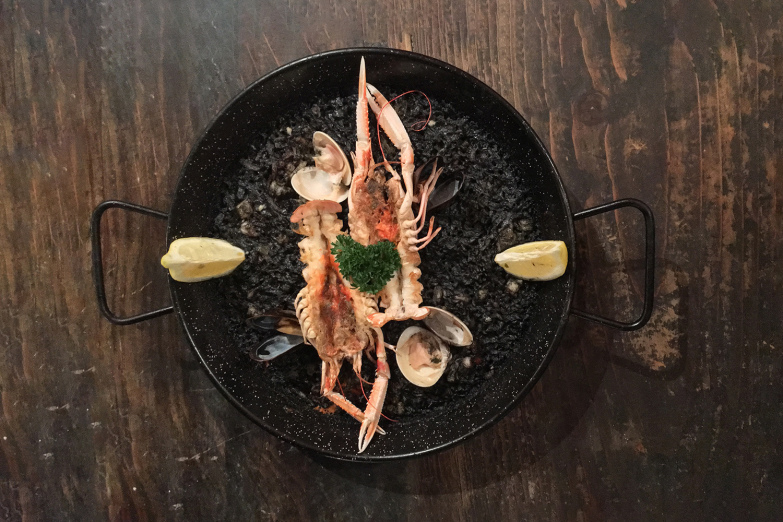 Presentation aside, this squid-ink rice was absolutely stunning. The trio of garlic, onion and olive oil first creates an aromatic base, thoroughly flavouring the squid, prawns and rice, before the house-made fish stock and ink sauce are added to craft a creamy, rich risotto-like rice dish full of umami notes and brininess. 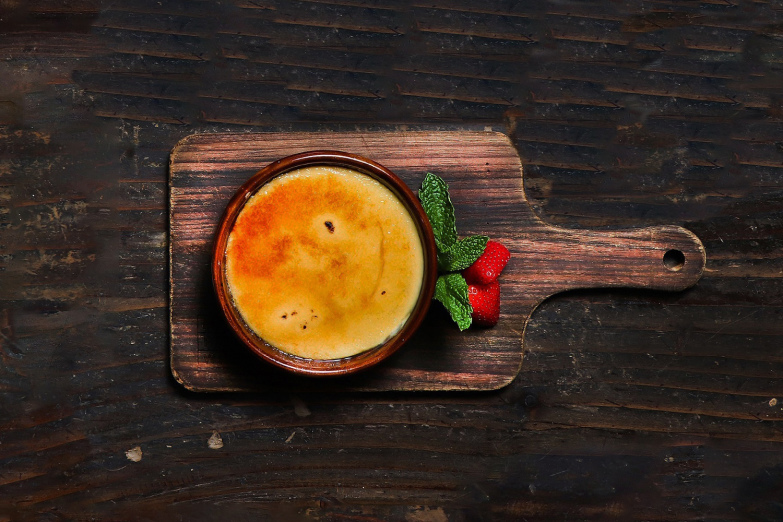 If you like crème brûlée, you’ll like this – it’s basically a Spanish version of the classic French dessert, flavoured with orange rind, vanilla and cinnamon. We cracked through the sugary crust with relish and heaved satisfied sighs at the taste of the warm, slightly citric custard. A true delight. 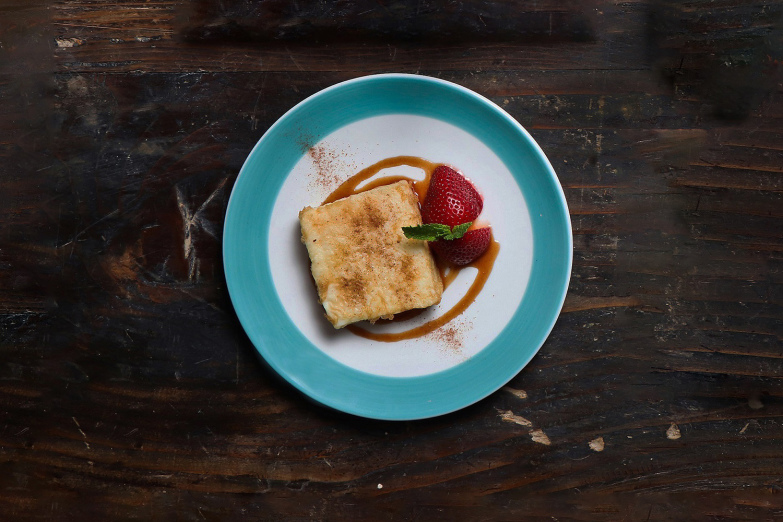 If you haven’t tried fried milk before, it’s a must! Leche frita is made by mixing flour with milk and sugar until it thickens into a dough, then the dough is fried, dusted with cinnamon and served with a toffee reduction. It may sounds bizarre, but it tastes absolutely delicious. What you get at Olé is a thick, wobbly slice with a soft, tofu-like consistency. Spoon up some of that toffee glaze and every forkful will bring you one step closer to mouthgasm. 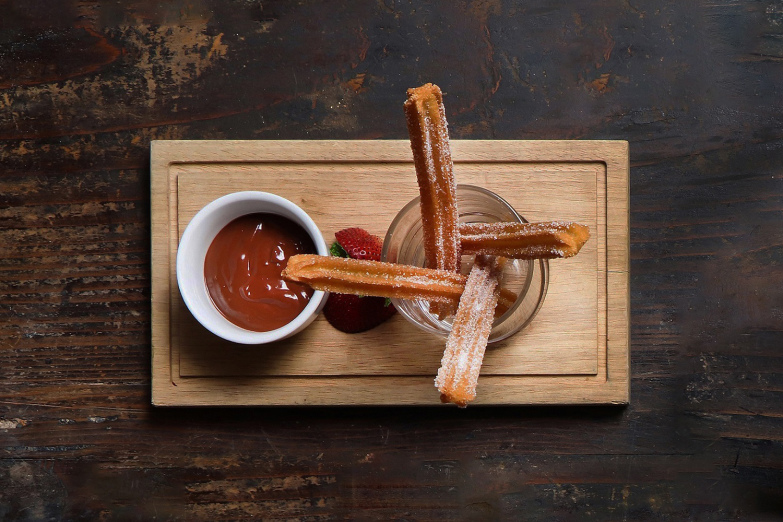 We were a little taken aback with these skinny churros, in a good way. Quite slim in appearance, unlike the puffy and rotund variation we’re used to seeing, our first bite provided a heavenly crunch. A liberal dusting of sugar made these light sweets perfect on their own, even without dunking in the hot chocolate sauce. These were definitely some of the best churros we’ve had in recent memory. 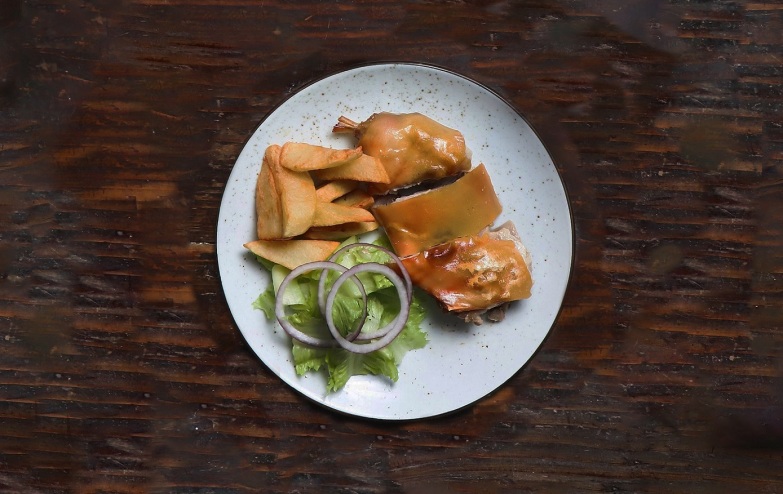 When you grow up surrounded by the aromatic Chinese-style suckling pig, it’s always fascinating to encounter other countries’ takes on this dish. And how those in Segovia – a historic city in central Spain – prepare it allows the pig and its natural flavour shine. The chefs at Olé applied a minimal amount of salt, then slow-roasted the pig for three hours until the flesh dripped with juices and the skin formed a crisp crust. Long story short: it was a textural and rich delight. 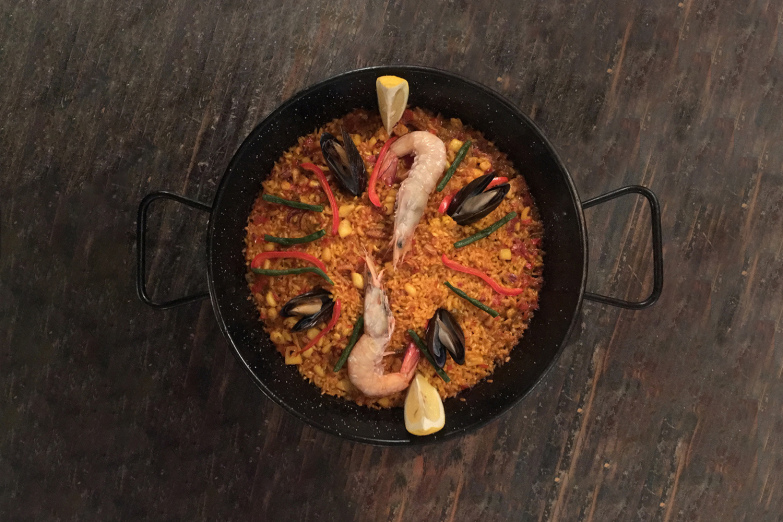 Paella has rarely tasted more seafood-y. Olé has really gone all out, loading their traditional seafood paella with all sorts of under-the-sea bounty, from prawns, to mussels, to octopus and squid. Seasoned with a homemade bisque, the rice was moist and sung with a subtle infusion of saffron and garlic. We were absolutely smitten with the savouriness of this paella and were left scraping at the soccarat (crunchy rice) at the bottom of the blackened pan for the very last scraps.

And, there you have it, folks. My rating skills have been exhausted and my stomach has ballooned. This incredible nine-course, 20-dish brunch menu at Olé is available on Saturdays and public holidays from 12–3pm and is priced at a mind-boggling $380 per person, with free-flow drink options available for wine, sangria, cocktails and mocktails.

Where to Brunch in Hong Kong: Autumn 2022