With the city’s focus placed firmly on art this month, we take a look at all the art-inspired dishes and events at restaurants around town

For those recent arrivals bemoaning the lack of art and cultural events in HK when compared to their European home town or North American city, all your Christmases will come at once when March hits. There are art happenings aplenty for the entire month, with the big guns taking over in late March: Art Central and Art Basel. Never missing a business opportunity, lots of bars and eateries are getting in on the art action, offering art-inspired drinks and dishes, exhibitions and more.

Taste the ART at Harbour City

A selection of Harbour City’s best eateries are offering some stunning art-inspired dishes and menus until 28 March 2017. At Marco Polo HongKong Hotel’s Italian restaurant-with-a-view Cucina, a five-course dinner menu ($888 per person) will be served showcasing such inspiring (and mysterious) dishes such as Seafood Palette and Psychedelic Tenderloin and the arty cocktail The Amber Answer ($110). Michelin-starred chef Nicolas Boutin’s whimsical he’ART Cuisine Chef Inspiration menu at ÉPURE features French art deco beauties including Vaucluse asparagus with grilled cuttlefish and black morel vinaigrette ($388) and poached rhubarb with petit pois, lemon and olive oil mousse and lime and basil sorbet ($128). There’s only one art-inspired dish at LE CAFÉ de Joël Robuchon, but it’s a doozy: Maine lobster salad with rainbow baby carrots and spiced carrot purée ($268). Over at glitzy China Tang, an eight-course menu ($1,080 per person, to include a mocktail) of Chinese delights await, from minced fish soup with black fungus and bamboo shoots to stewed pork belly with red dates and candied fruit. 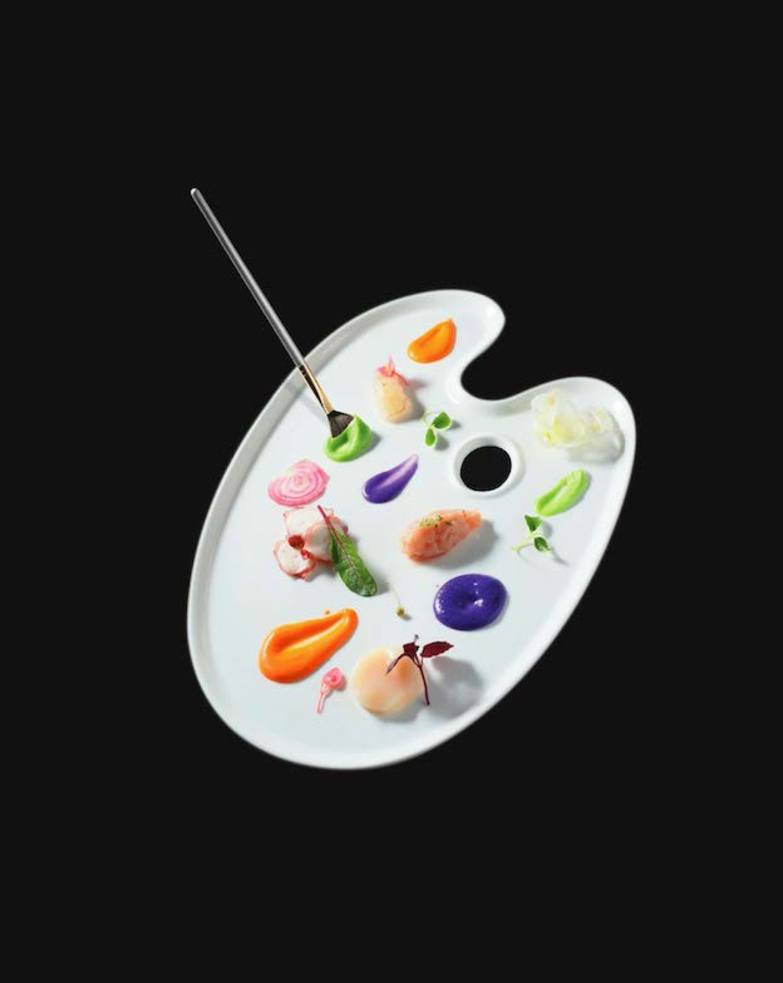 Japanese artist Takashi Murakami is the inspiration for this acclaimed restaurant’s Psychedelic Flower cocktail ($148), crafted by mixologist extraordinaire Alexandre Chatté and available for sipping until 31 March. The art theme continues with Seafood Room’s six-course dinner tasting menu ($688 per person), which presents dishes inspired by global artists – from Landscape (scallop sashimi with Japanese dressing), an homage to Salvador Dalí’s Sunrise, to Earth on a Plate (Wagyu beef fillet and braised ox cheek with potato, spinach, mushroom and truffle), playing tribute to Mother and Child (Divided) by Damien Hirst (the artist’s infamous cow and calf carcass sculpture). For one night only, on Saturday, 25 March, the restaurant will join forces with Pont des Artes, a French wine brand that creates exclusive collaborations between art and wine around the world, to host a wine pairing dinner to accompany the art menu ($1,288 per person). 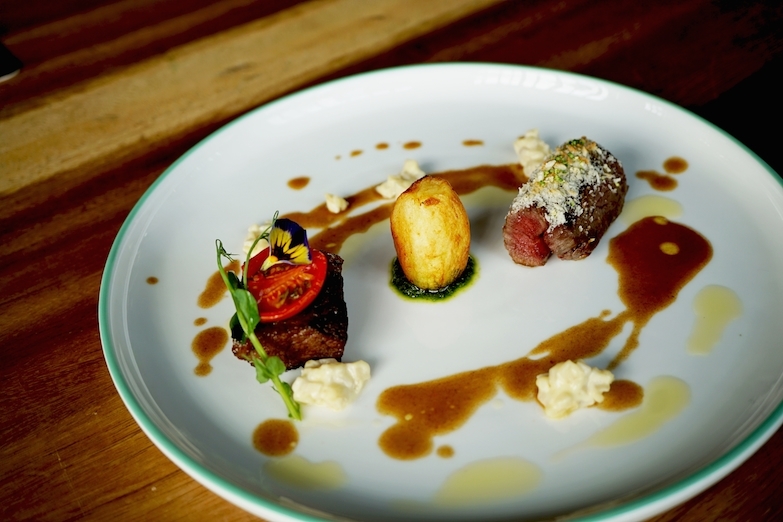 Earth on a Plate

Wine and Dine at Art Central

Taking place at Central Harbourfront from Tuesday, 21 March till Saturday, 25 March, Art Central’s food and drink options are varied, interesting and plentiful. Michelin-starred chef Philippe Orrico of ON Dining Kitchen & Lounge and Upper Modern Bistro headlines the F&B side of the event with his pop-up French bistro Le Marché, serving up sandwiches, salads, cheese and charcuterie platters as well as heartier plates such as teriyaki beef short rib ($198). To whet your whistle, sip cocktails such as ONegroni and Orrico Spritz ($90 each) by legendary barman Giancarlo Mancino. In the Street Food Central area, choose between Asian eats such as Hainan chicken rice and Sriracha street corn from Mrs Pound, poké from Aloha, Mexican bites from Brickhouse, Chinese-style burgers from Little Bao, single-origin teas and sweet treats from Teakha, top-class burgers from Beef & Liberty, the best gourmet sarnies around from Bread & Beast and cocktails plus live jazz courtesy of Fernet Hunter. Click here to purchase Art Central tickets and let your nose and tummy be the guide once you arrive. 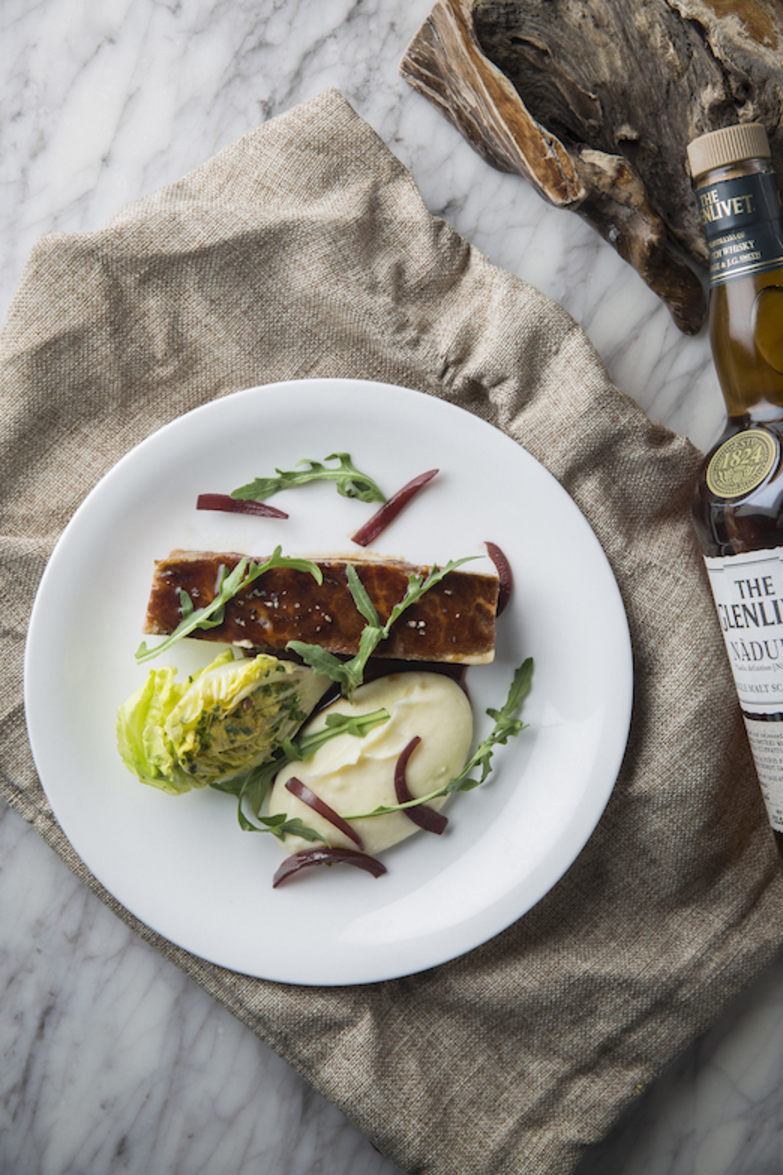 The Lounge at Four Seasons

Cooking can arguably be considered the world’s first art form, and over at The Lounge from 21–26 March, Executive Chef Andrea Accordi of Four Seasons HK, who is Italian, will be partnering up with Japanese chef Kazumi Sawada of Four Seasons Hotel Seoul for the Mastro/Shisho menu – a seven-course, four-hands dinner tasting menu ($1,250 per person) paying tribute to the seasonality, colour, texture and aroma of kaiseki cuisine featuring such luxury ingredients as sea urchin, Japanese toro and Mayura beef. Each chef will craft three courses, with a Hokkaido pumpkin dessert to finish. A la carte options are also available. Partnering with The Cat Street Gallery, British artist Gavin Mitchell’s collection Mixed Up, a contemporary take on the geisha, will adorn the walls – and the works are yours for the taking (at the right price, of course). 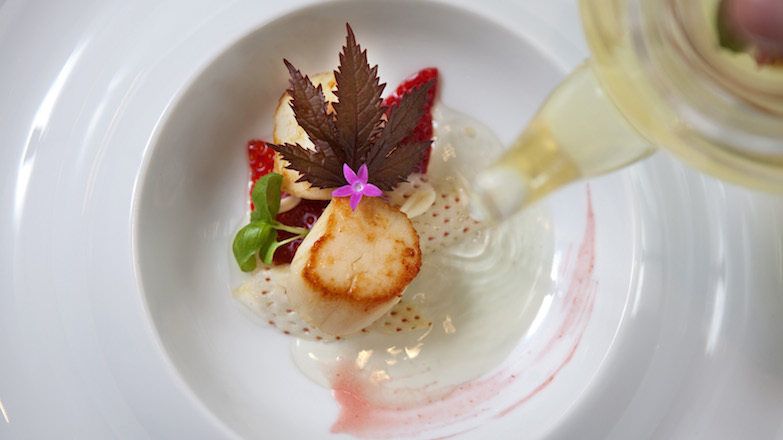 Available this month is this glam Japanese-Italian restaurant’s Tapestry on a Plate culinary offering, inspired by artists such as Katharina Grosse and Kimsooja. Orbetello sea bass carpaccio layered with avocado, seasonal vegetables and toasted hazelnuts and decorated with lemon foam is paired with the Geisha’s Encounter cocktail, made with Tanqueray gin, Cocchi Rosa wine, yuzu, lemon, peach matcha and egg white – and uniquely overlaid with a piece of traditional Japanese rice paper tapestry. This artistic pairing is priced at $398 or can be ordered separately at $268 and $138 respectively. 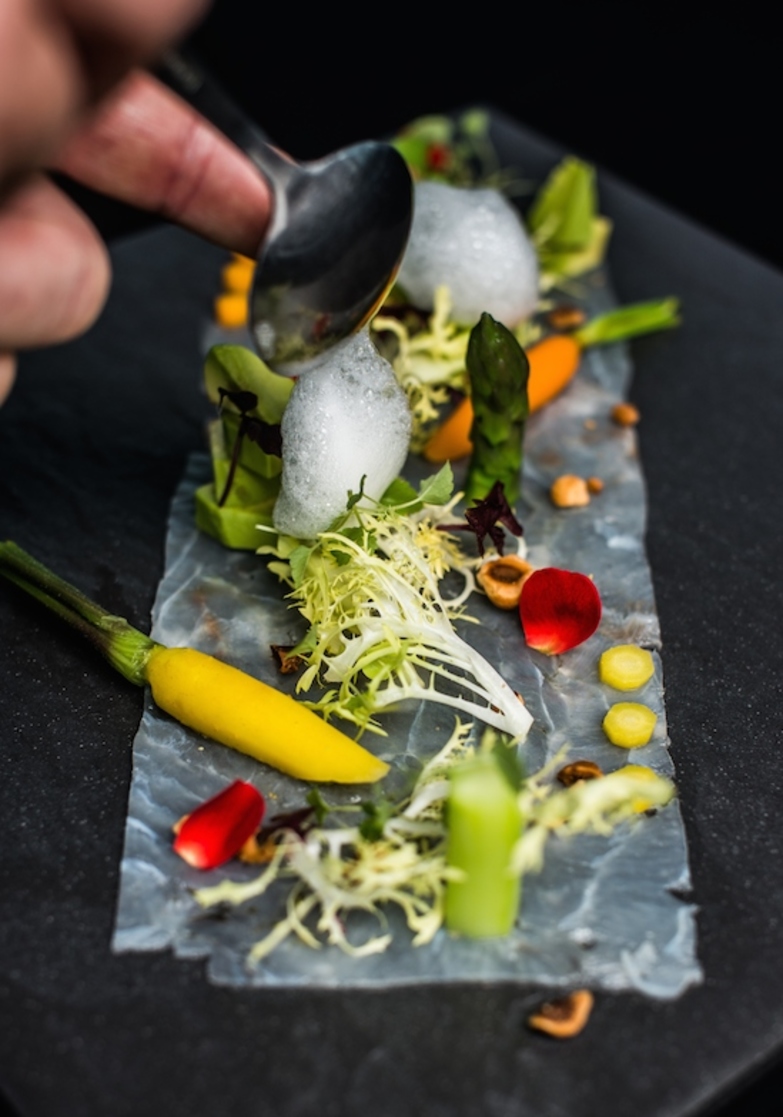 Chef Kun Young Pak’s Savouring Art set menu – $688 per person, to include the likes of seasonal modern Asian dishes such as seafood poké, short rib lettuce wraps, blackened miso salmon and a sensational chocolate trio to finish – is just one of the many artsy delights on offer in March at CÉ LA VI. On Wednesday, 15 March from 6pm, Lun Wong, founder and creative director of Lunatic Creative Studio (who has designed and created murals for Bo Innovation), will commence a six-hour live wall installation on the Sky Deck. Throughout the month, seven artists, including D*Face, Takashi Murakami, and Hikari Shimoda, will be showcased on all three floors, with 18 original pieces available for purchase. 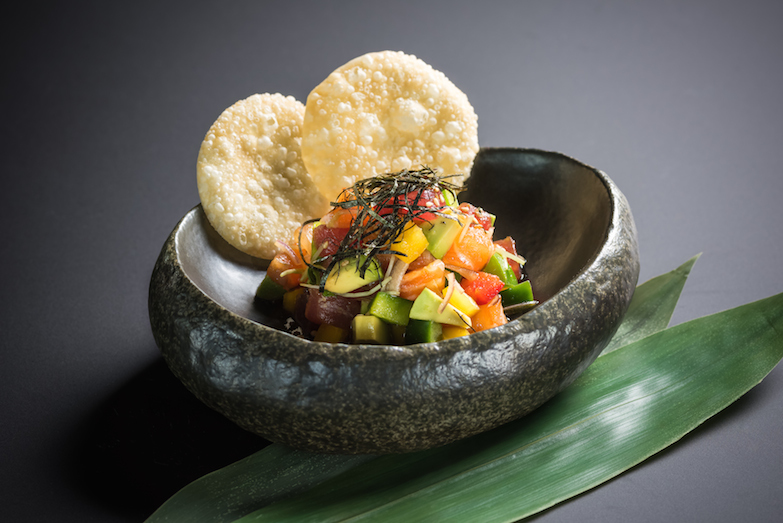 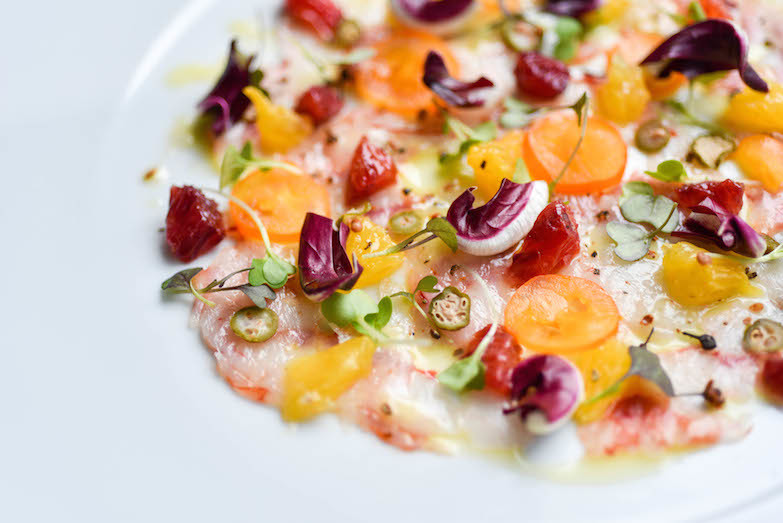 Partnering with FeedMe Guru, 12 restaurants in LKF – including Foodie faves Fish & Meat, Mercato and Jinjuu – are focusing on the Colour of Ingredients theme to create vibrant, artfully designed dishes, cocktails and set menus for the month of March. For more information and to book, click here. 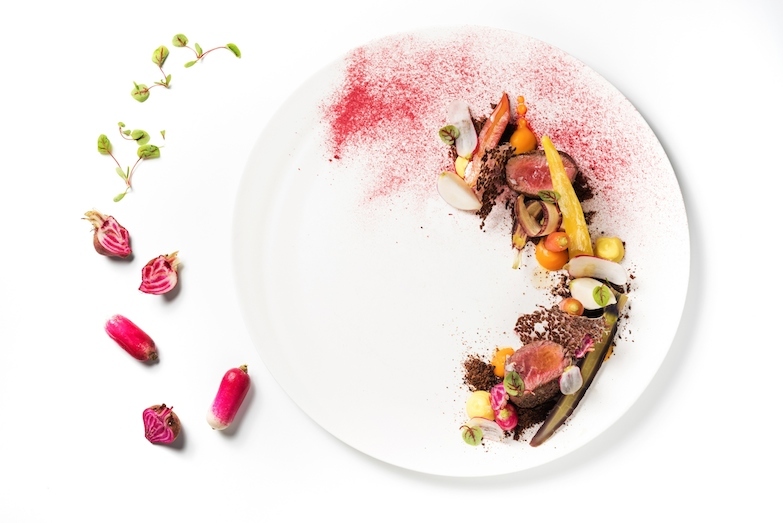 Designed by HK-based Portuguese artist João Vasco Paiva, head to Potato Head Hong Kong from 17 March until 2 April for an immersive art/music/drink experience. The Absolut Art Bar is 'the artist’s vision of a timeless oasis where the contemporary world and nature coincide', with the design and cocktails inspired by the opening scene of Terrence Malick’s 1998 film A Thin Red Line. This has been achieved through the use of sculpture, film projections, 'resting nests' and fans. In collaboration with Potato Head mixologist Kamil Foltanto, the three thematic cocktails ($128 each) – Fletcher, Private Witt and Paddy Button – are named after both real and fictional castaways using ingredients including Sichuan pepper–infused maple syrup, peat bitters, basil and lemongrass. The music programme starts in the afternoons with live acoustic performances while the evening kicks into overdrive with both electronic performances and DJ sets. We're definitely intrigued about this one... 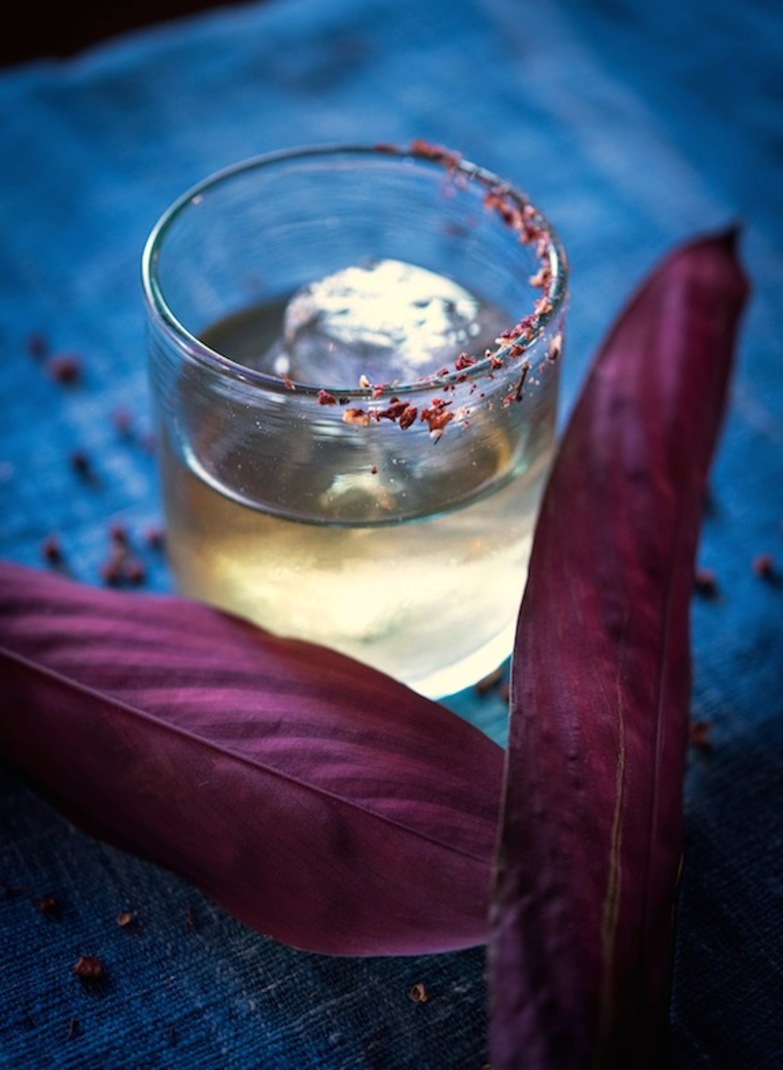