Brunch that makes Saturdays and Sundays worth sleeping in for

My husband loves soccer, plays it relatively frequently and wouldn’t miss watching any major tournament for the world. This sport, however, isn’t exactly my cup of tea, but as a loving wife, I try to support his hobby by occasionally watching a match or two. It’s now World Cup season, which means wee-hour matches and catching up on sleep over the weekend.

CÉ LA VI is intimately familiar with late nights, being one of the hottest nightspots in town. And they’ve decided to introduce weekend brunch at $488 per person (from +$88 for free-flow packages) to complement the lie-ins during this period. Suddenly, late-morning Saturdays seem almost worth losing sleep for, so we decided to brunch in the morning following an exciting match between Spain and Portugal.

But, first, a Tizzy Shot ($50). This is an organic, pocket-sized elixir that some have likened to a natural espresso. We began with the charcoal flavour, drinking it straight up. Made with ginger, manuka honey, water and activated charcoal, it had a slight zing and a mild charcoal aftertaste. But the classic ginger shot immediately made our eyes pop, sending shivers down our spines. This one was extremely pungent, so for those who don’t do heat, it’s best to down it with soda water and sip slowly. 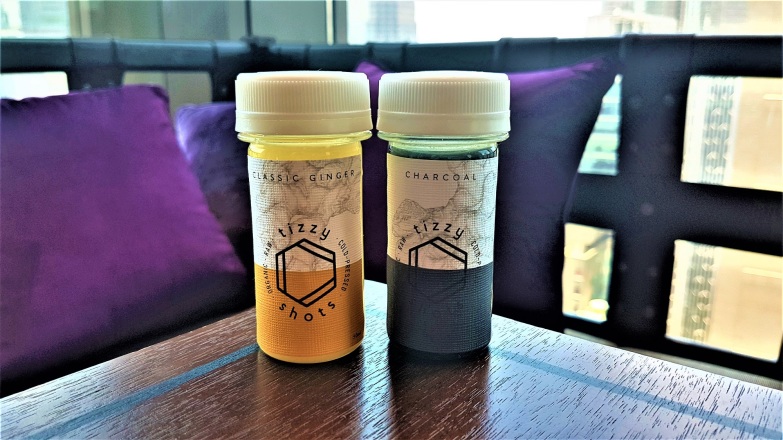 We began with the seafood, sushi and sashimi platter. The top tier contained slices of mixed sashimi and pickled sushi. The sashimi had a mild, tasty, fishy flavour and the squid was smooth, so good that there was no need for soy sauce dipping. And at the bottom were plump and juicy prawns accompanied by a tangy cocktail sauce, fresh clams and oh-so-sweet oysters. 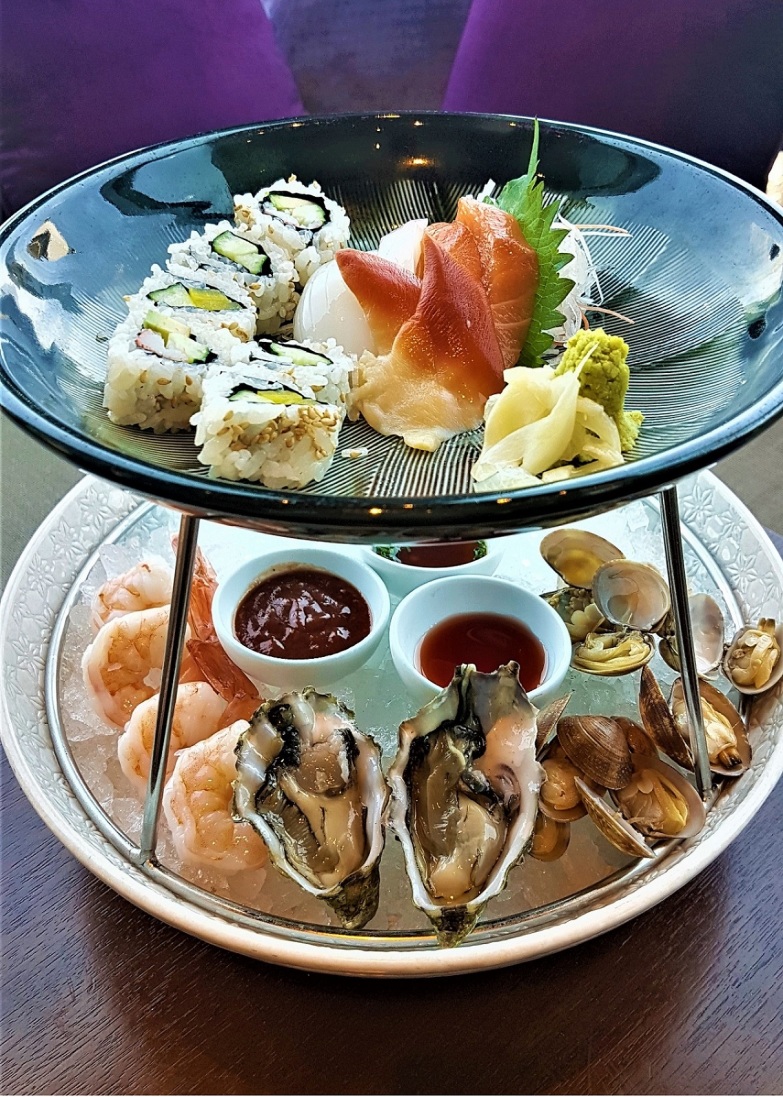 CÉ LA VI has a good range of starters, and we couldn’t help ordering most of them. We selected a salad with yuzu-soy dressing and miso soup to begin. And thereafter we tried both the prosciutto and smoked salmon eggs Benedict, coated with luscious hollandaise sauce. But we were blown away by the tempura platter of deep-fried squid, prawn, pumpkin and enoki mushroom. The items were thinly coated with batter, so they stay beautifully crisp yet were able to hold the accoompanying dipping sauce without getting soaked. The vegetable fried rice had a particularly pleasant flavour, as if it had been cooked kamameshi style and then fried. We learned later that it had been cooked with sake and a special nigiri soy sauce, giving it its unique fragrance. 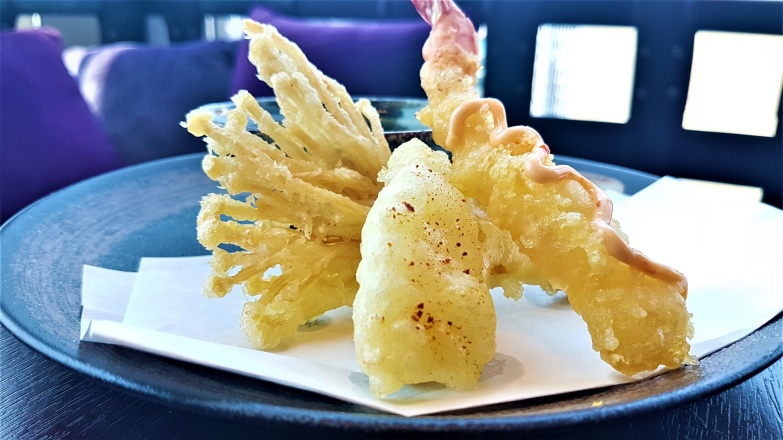 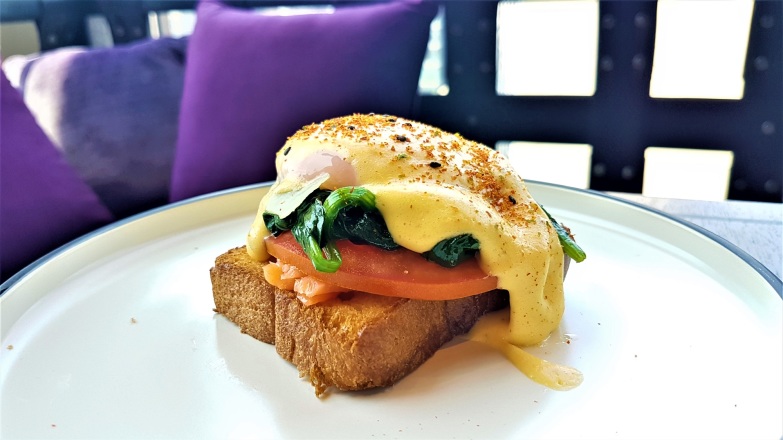 For our pièce de résistance, we selected the grilled lamb chops (+$288) and seared snapper. The lamb dish looked pretty, but strangely, the chops were all different sizes. I’d have preferred the lamb to be done medium, but each piece was cooked to a different doneness – one was medium rare (which was raw near the bone), one medium well and the other was, well, completely well done. I was nonetheless happy that there was no trace of that strong lamb smell. The meat was complemented with a kick-ass sauce made with Dijon mustard, yuzu and red and yellow bell peppers.

The seared snapper, on the other hand, had a nicely coated batter that achieved a good crisp. The fish also had a good bounce, and the tomato-salsa dressing and side of salad leaves made the dish fresh and light. 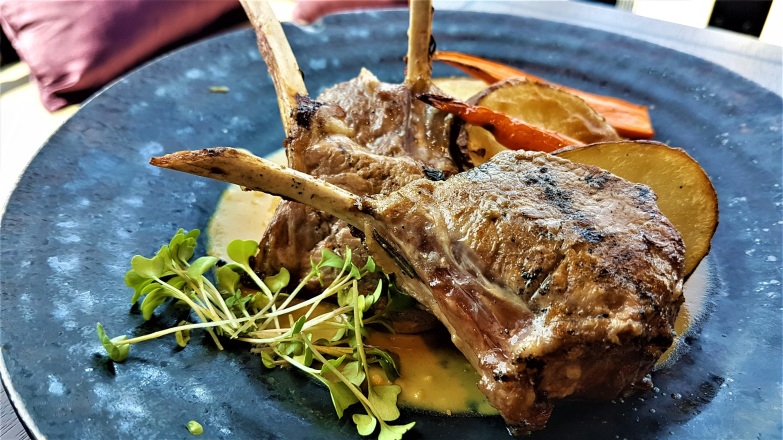 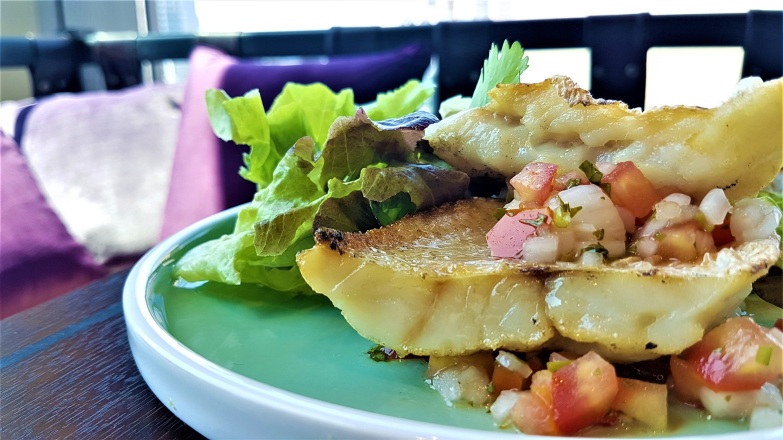 The brunch ended with a prettily dressed dessert trio. We first cut into the matcha tartlet nestled on chocolate soil. The molten filling was rich and its aromatic flavours were enhanced by the dark chocolate crumbs. The Earl Grey crème brûlée was lighter, garnished with slightly sour mixed berries and melt-in-the-mouth meringue strips. But we both unanimously agreed that the tiramisu tart was the best of the lot. With whisky foam atop it and scattered with pop rocks, it was like a party in the mouth. 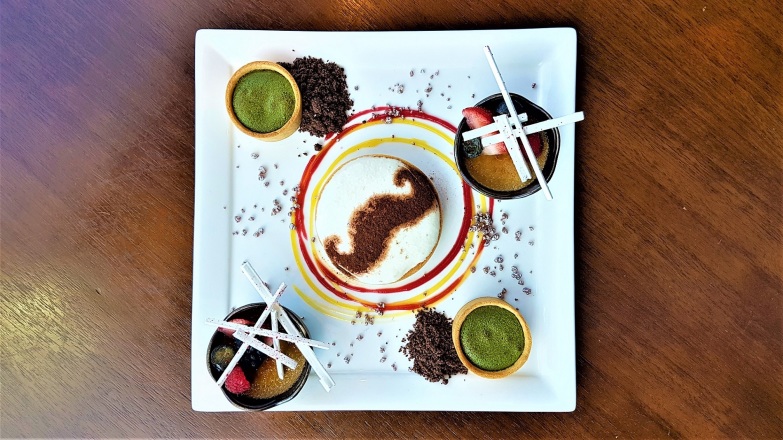 The presentation of this Japanese-accented brunch at CÉ LA VI was fun and colourful, with lots of Instagram-worthy dishes. Most of the dishes were flavourful and light, so we left the restaurant pleasantly satiated. A special thumbs-up for the dessert trio – we wished we could’ve had seconds! Caffeine is not included in this brunch, so, for coffee lovers, you may wish to opt for a Tizzy Shot instead, which will perk you up just as nicely.