Japanese cuisine with a European touch that truly shines

How can you tell when a head chef is passionate and skilled? The answer was apparent when I visited HAKU. I observed in silent admiration as Chef Augustin Balbi deftly moved around the open, kappo-style kitchen, directing assistants in a seamless, fascinating unity, almost like a human symphony, while compulsively explaining his intricate creations to diners. 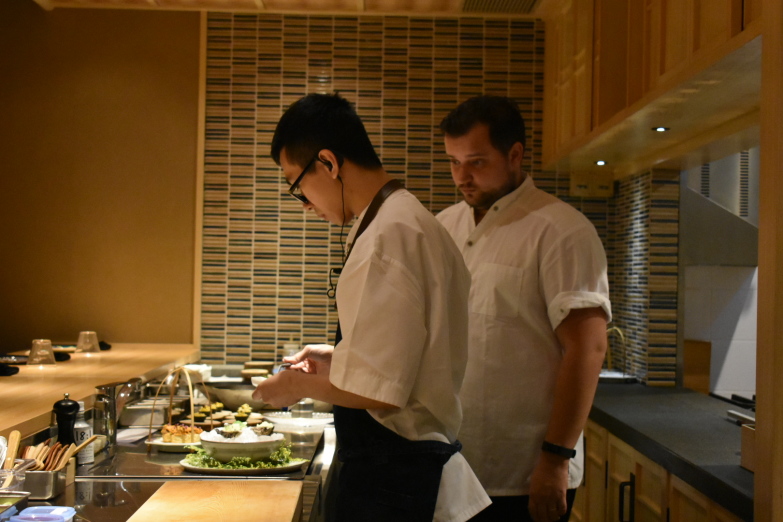 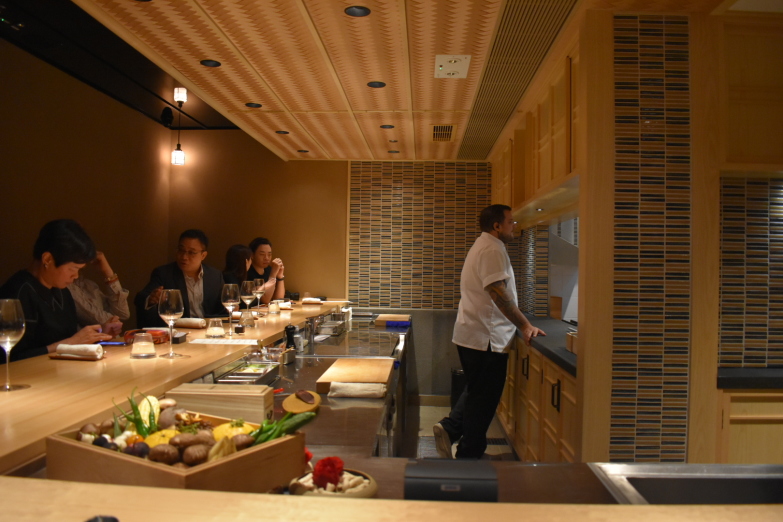 Right from the get-go, HAKU has an interesting premise. It‘s a collaboration between Hideaki Matsuo, of three-Michelin-starred Kashiwaya in Osaka, and Augustin Balbi, who most recently headed the kitchen at The Ocean in Repulse Bay and who has spent five years cooking in renowned Japanese restaurants. KAKU is centrally located at TST‘s Ocean Terminal but does a great job of transporting diners away from the rowdiness of the hectic shopping mall to a tranquil refuge decked out in traditional Japanese fashion. 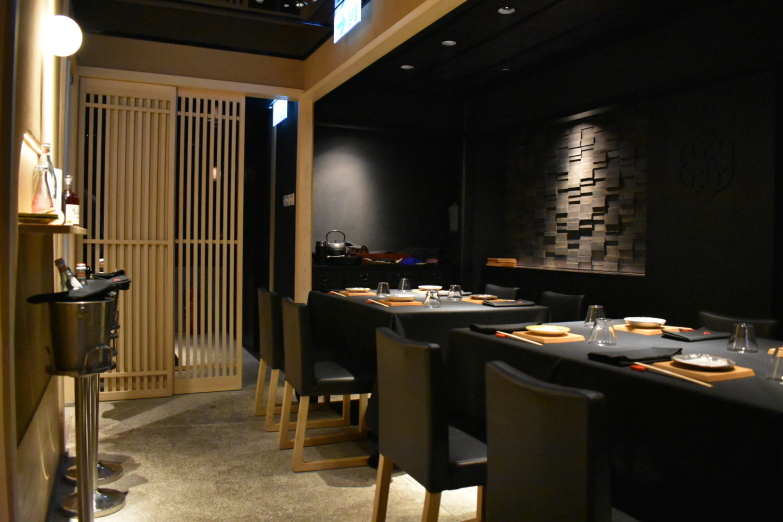 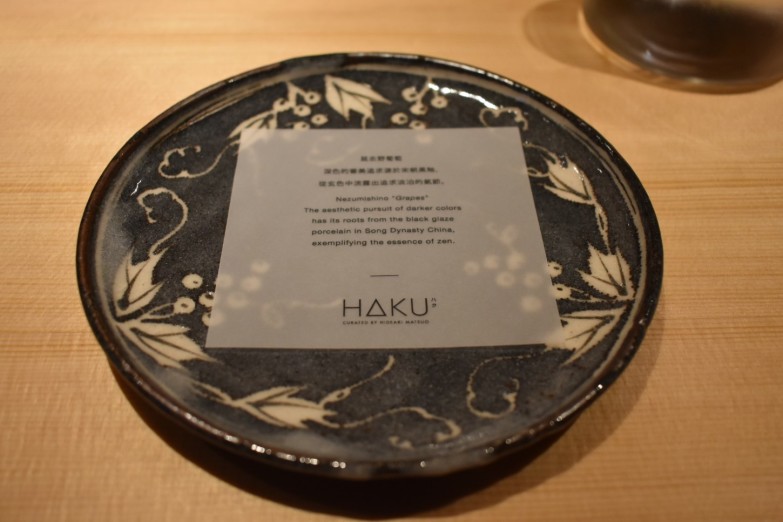 If I were to summarise the entire HAKU experience in one word it would be “details”, from the attention given to the flavours, to the presentation, right down to the tableware. We started our meal with amuse-bouche that consisted of kibinago (silver-stripe round herring), isaki (chicken grunt), tomorokoshi (sweetcorn) tart and pickled beetroot. Among the four bite-sized snacks, the isaki, which is actually a type of fish, stood out with its light, delicate and subtly sweet flavour encapsulated by perfectly crisp seaweed. The pickled beetroot provided an incredible aesthetic, rolled up and placed as the hearts of roses. This was amazingly tangy, a great kick-start to our taste buds. 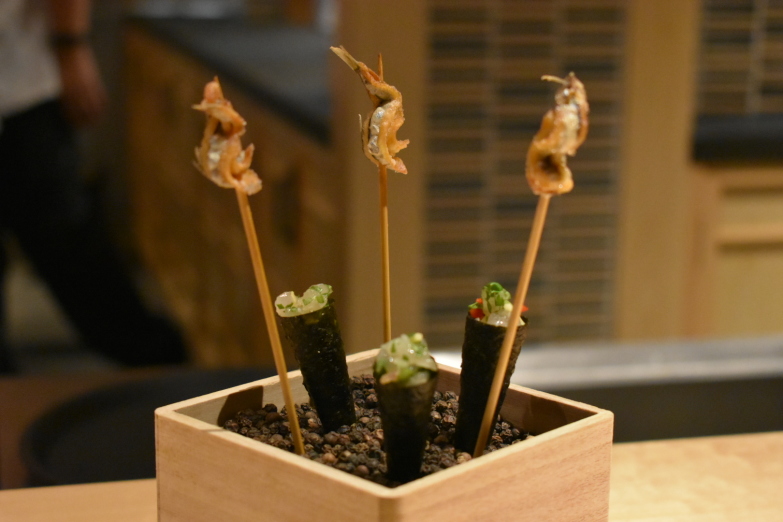 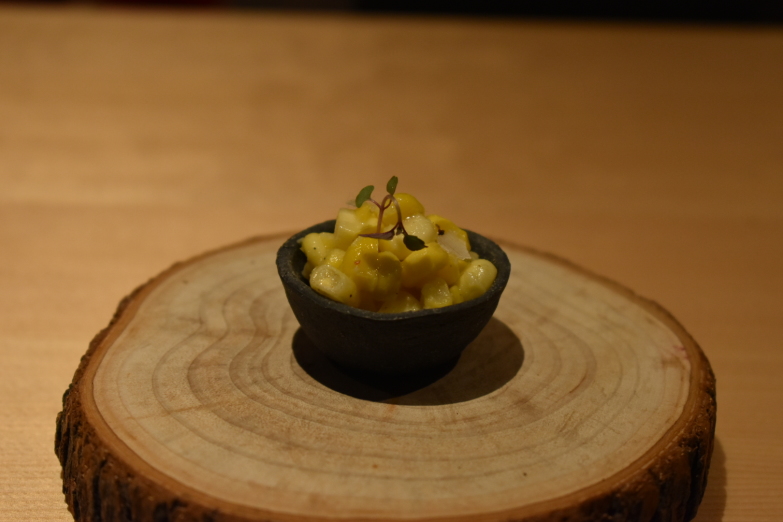 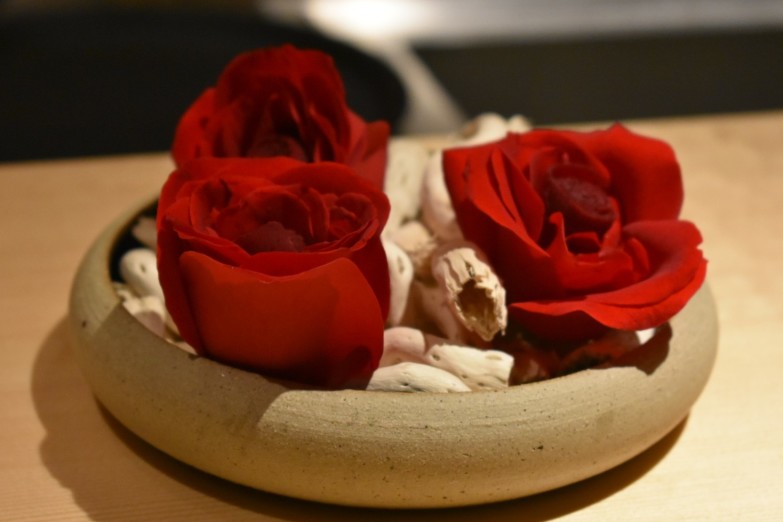 Then came the Japanese oyster, a plump one from Fukuoka topped with yuzukoshu (spicy-sour salt) and a green apple granita that incredibly balanced the strong taste of the ocean. The tomato with bellota ham was also a cleverly paired combination, utilising Kyushu tomatoes mixed with shards of jamón de bellota, kamasu (barracuda) and a sprinkling of sake kashu (sake residue mixed with rice flour and baked). The result was a beautiful dish with multiple layers of texture and explosions of freshness and umami. 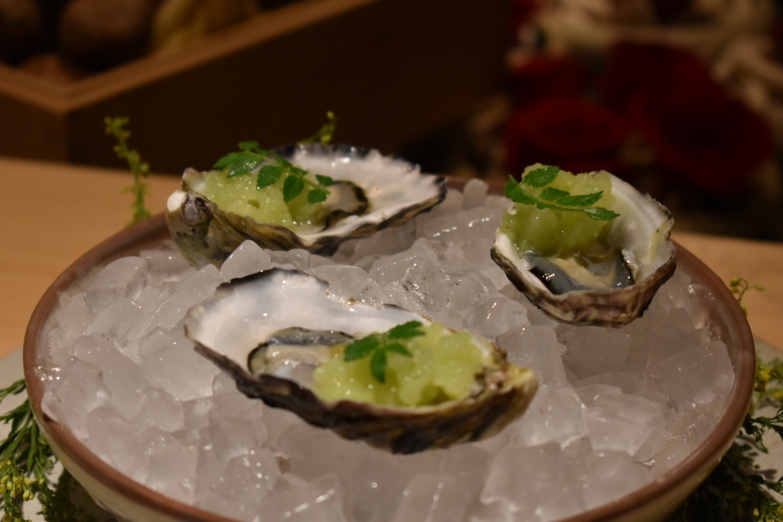 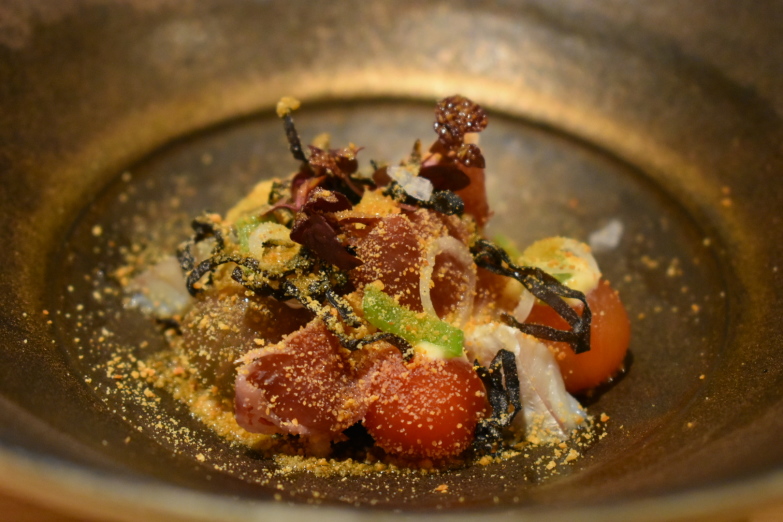 The next dish was probably my favourite (the competition was intense – it was a roller coaster of emotions), a lavish foie gras with lotus root. The lotus root crisps came in a bold black colour, as they were prepared tempura style but with fish ink. The incredibly rich and creamy foie gras was garnished with dollops of black cherry jam, slices of cherry and a pinch of citrus salt. The pairing of the foie gras and lotus root crisps resulted in a clever contrast of sweet and savoury and smooth versus crunch. 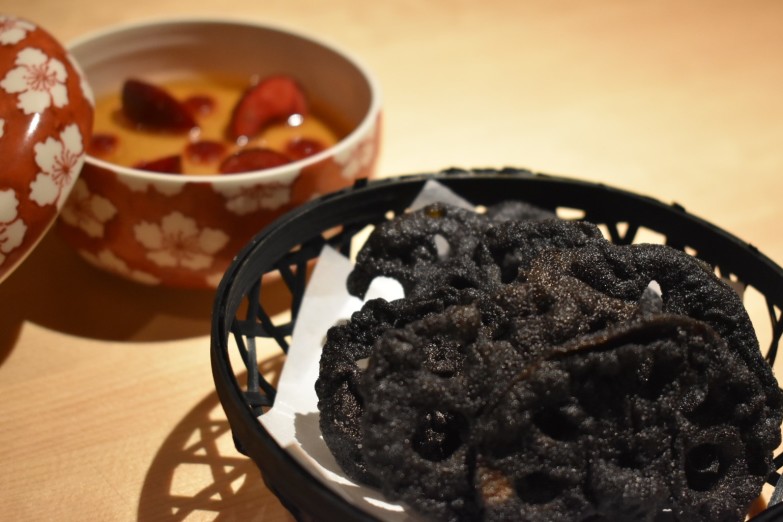 Because no Japanese meal is complete without uni (sea urchin), we were then served a majestic Hokkaido uni and brioche that consisted of a generous spread of uni atop a bed of aubergine purée and a slightly toasted brioche. I feel like pretty much everything at HAKU is designed for the ‘gram, and the way in which this was served in a miniature pergola is a testament to that. The dish was very satisfying for a hardcore uni lover, but I would have liked it even more if the brioche had been better toasted to present a more contrasting texture. 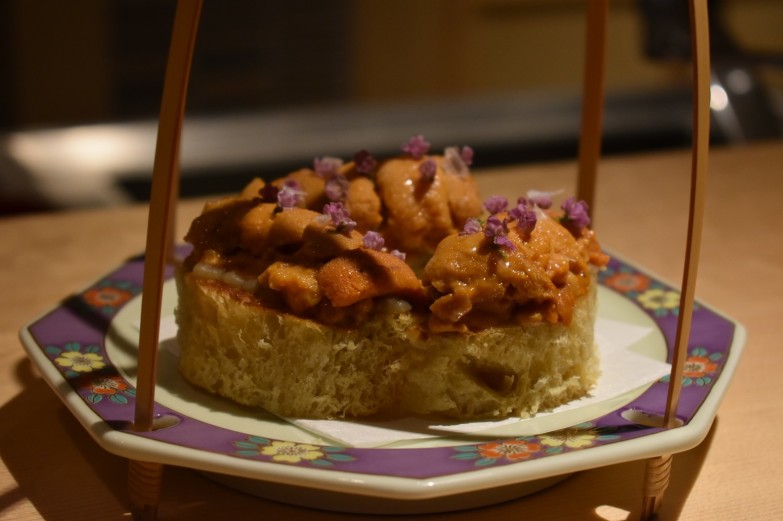 The oxtail paled slightly in comparison. Although it had a tender interior and was crispy on the outside, I found it a tad dry and the citrus zest was unrecognisable. The garnish of bonito flakes also did not seem particularly well thought out. 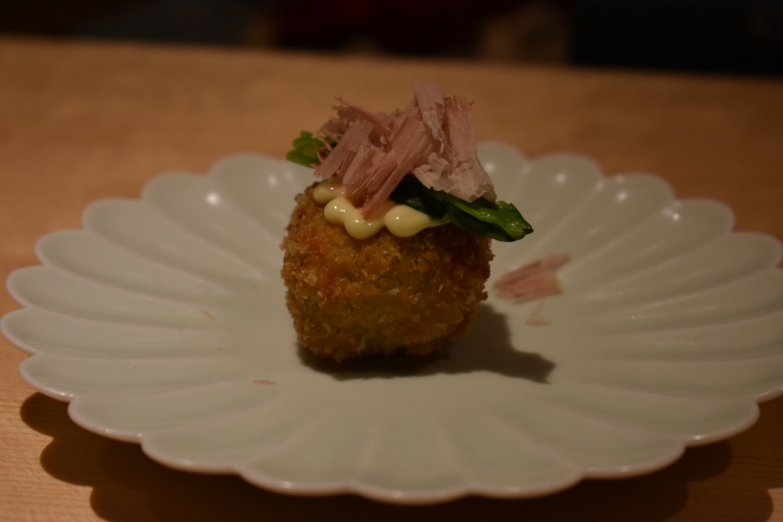 Luckily, Chef Balbi more than redeemed himself with his next dish, which drew gasps as it arrived at the table: Nagasaki tuna and caviar. The sole extravagance of the dish made me question how the math works out in the set menu, but I‘m not here to complain when it was so dang delicious and spectacular looking. The base was made of a substantial portion of chutoro (medium fatty tuna) topped with Kristal caviar, with a side of rice tuiles for balance. 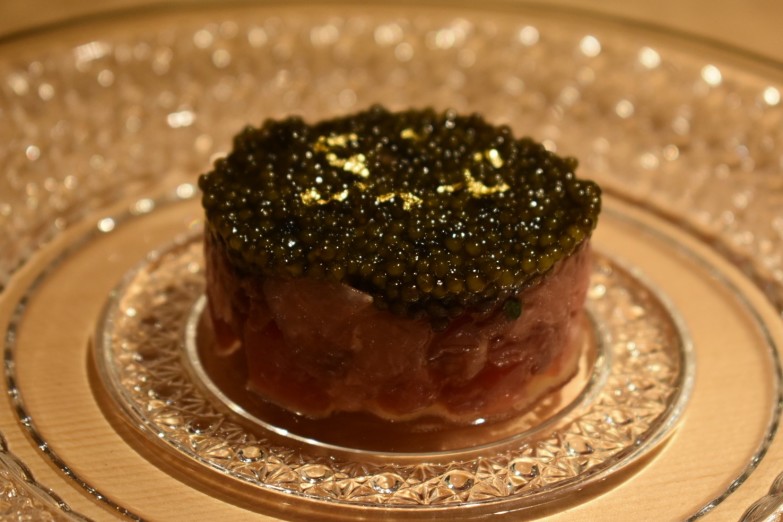 The final savoury dish was a mind-blowingly buttery and smoky Kagoshima A4 Wagyu cooked over binchotan charcoal and served with mushroom, asparagus and truffle sauce. This was the best beef I‘ve tasted in awhile, so chock-full of flavour that it didn‘t need anything else but a pinch of salt. The beautiful hexagonal plate was the icing on the cake. 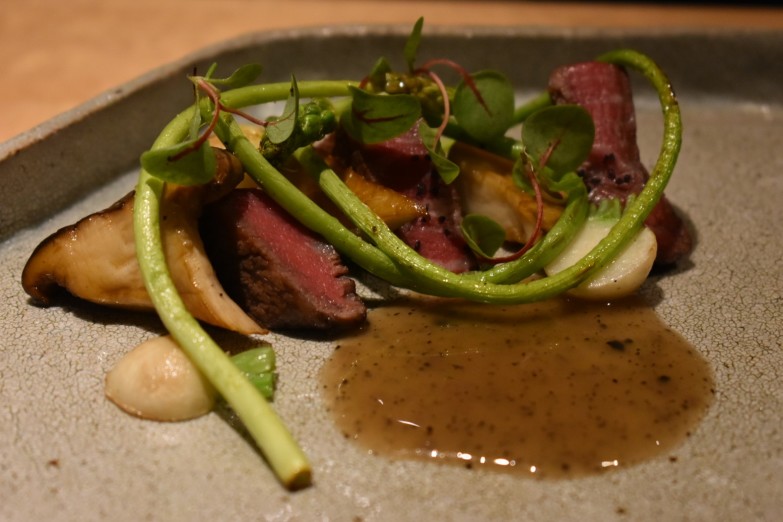 Japanese fruits are well known for their top-notch qualities, but to me, nothing quite beats the flavour of a fresh, lush peach, so my heart went wild when we were presented with the white peach with granita, a whole peach filled to the brim with peach chunks, panna cotta, Hokkaido milk foam and granita made from peach juice. So sweet, so refreshing. 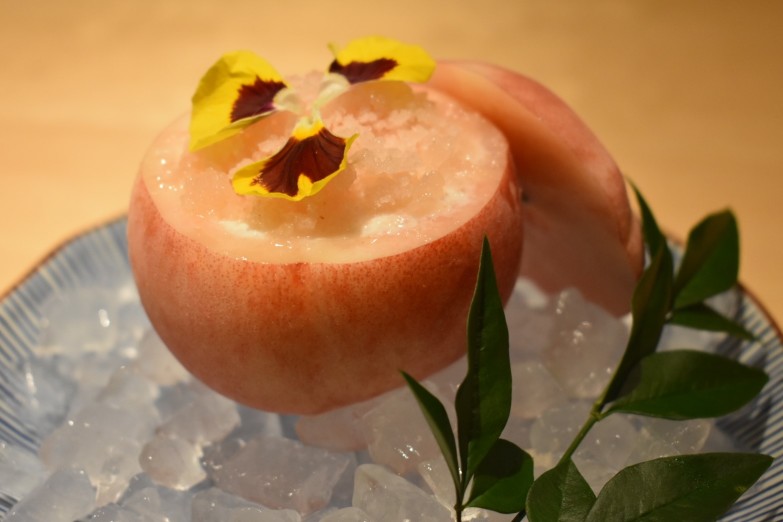 Ending our meal on a nostalgic note, we were served a petit four of candyfloss, a simple gesture backed by the idea to send every customer off with a smile on his or her face. 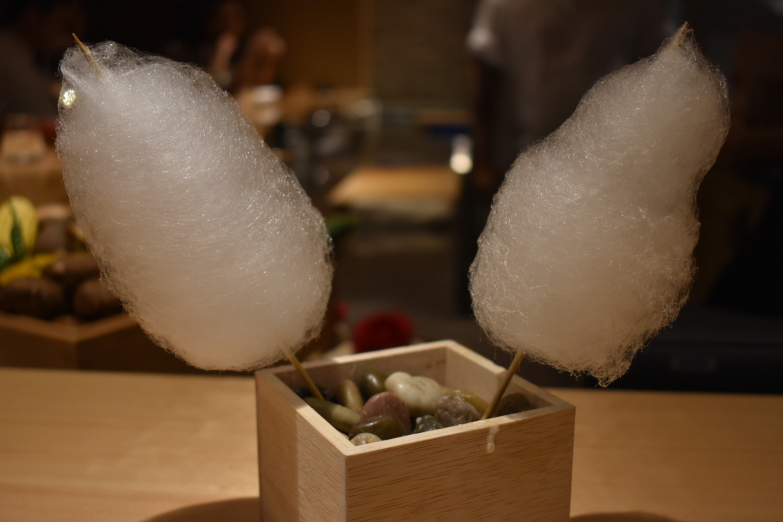 A very, very memorable meal at a very reasonable price, considering the ingredients and execution – the eight-course set menu comes in at $1,380 per person. It‘s clear how much effort has gone into designing every dish to create individual experiences that are impeccable in every sense, from appearance to texture and flavour. Give HAKU a little time to iron out some small kinks and allow Chef Balbi to reach even greater heights.

Where to Celebrate Oktoberfest 2021 in Hong Kong

Did You Know...? The Foodie Trivia Edition