Travelling through Asia: One Wine and Spirit at a Time

When it comes to a traditional food and wine pairing, most people don’t think of Asian wines and spirits to accompany a meal. After all, it wasn’t long ago when the idea of Chinese wines had most wine professionals turning up their noses. But as a wine and spirit lover prone to living on the edge, I like testing the boundaries and recently had the opportunity to do just that while sampling the latest Taste of Asia menu at the Four Seasons’ Lung King Heen.

With a wine list boasting an impressive range of Old and New World varietals including natural and organic wines, the restaurant is keen to accommodate wine enthusiasts of all levels. Thanks to the creativity of the energetic and somewhat cheeky sommelier Bernard Chan, we were pleasantly surprised to find just how far Asia has come in producing regional wines and spirits that complement acclaimed chef Chan Yan Tak’s seasonal delicacies.

Our first course consisted of crispy scallop with fresh pear and Yunnan ham, a signature amuse-bouche at Lung King Heen and one that keeps returning to the seasonal menu owing to requests of loyal diners. Paired with Hong Kong Beer Co’s Big Wave Bay IPA, served in a wine glass, the refreshing carbonation of the fresh beer with its combination of medium hoppiness, citrus and bitter notes was a tasty if unexpected complement to the crispness of the scallop and salty sweetness of the ham. According to Bernard, the Four Seasons is always keen to pair and showcase local ingredients, and we certainly thought it was a fitting tribute to the quality of Hong Kong’s local craft breweries. 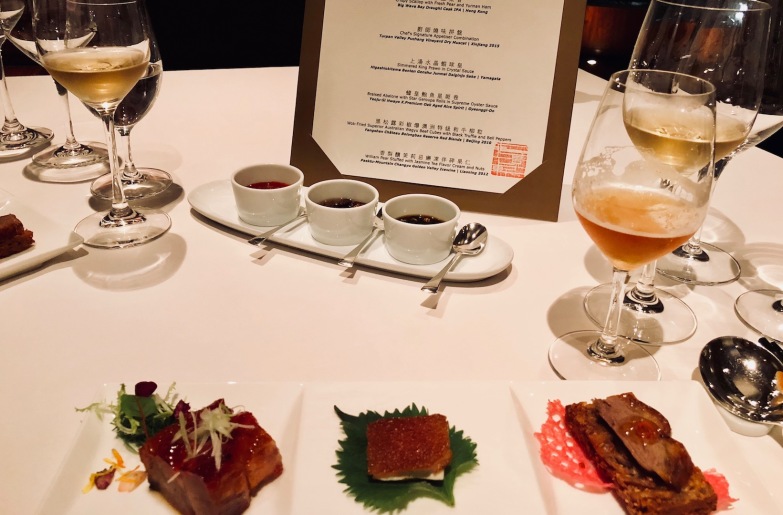 Next came the chef’s famed signature appetiser combination of roast goose on lotus root toast, crispy suckling pig and fatty barbecue pork with honey. These beautiful ingredients were highlighted by a Turpan Valley Puchang Vineyard Dry Muscat 2015 from Xinjiang, the grape-growing capital of China and the country’s largest producer of wine. Despite its surrounding desert conditions, Turpan is apparently a modern-day oasis thanks to an ancient irrigation system that routes water from the nearby Tian Shan mountains. The wine itself was also a bit of a conundrum – with a golden colour and intensely aromatic nose, it tasted nothing like how it smelled, with low residual sugar, a dry finish, a herbaceous, almost medicinal flavour and a high alcohol content, undoubtedly owing to the hot, arid climate. Though admittedly the wine’s flavours took some getting used to, it was an interesting and symbolic pairing that highlighted regional delicacies with a regional wine. 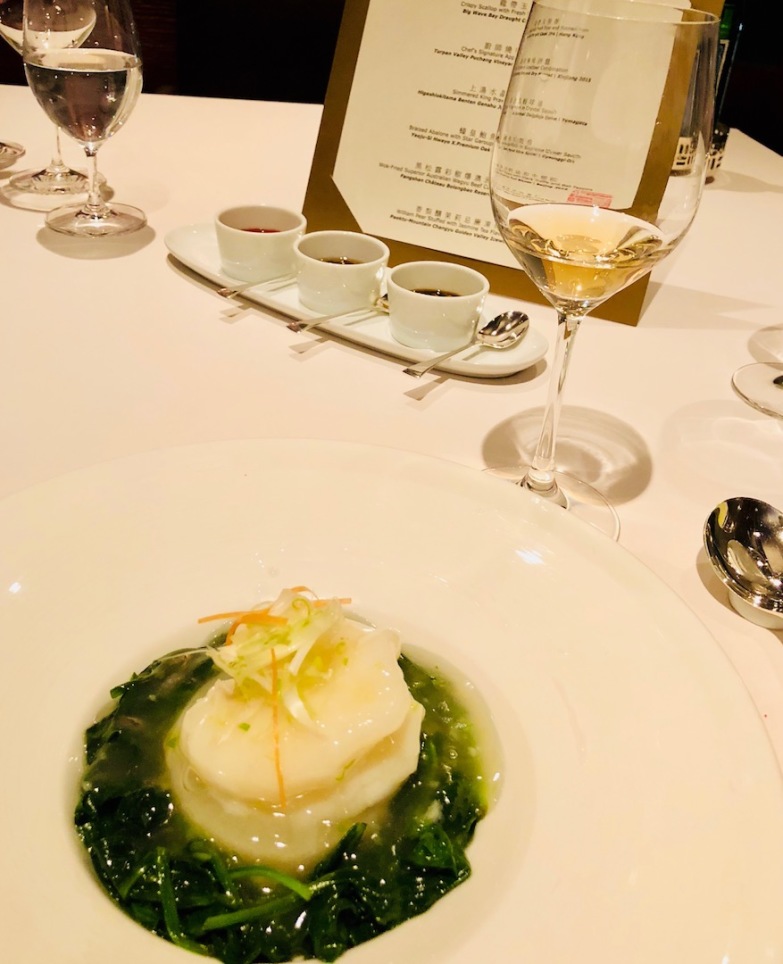 The simmered king prawn in crystal sauce paired with Higashiokitama Benten Genshu Junmai Daiginjo sake came next. A premium dry sake from the Yamagata region of Japan (which is also famous for its wines), the sake had a deceptive light richness in rice flavour that complemented the delicacy of the prawn and offered a balanced counterpart to the crystal sauce. While we would have preferred a lighter touch of sauce in order to let the ingredients shine, we liked the unexpected twist on the pairing journey, with a delectable sake pouring that rounded out the dish with its rice notes.

For those who truly want to walk on the wild wine side, another interesting option that the sommelier had us try was Danish wine Vexebo Vin Solaris 2015. A varietal that is a cross between Riesling and Pinot Gris, this natural wine, with its distinctive sea-cucumber aromas and high acidity, is evidently a popular option for seafood pairings, due to its ability to enhance the sea minerality and textured elements of Asian seafood. 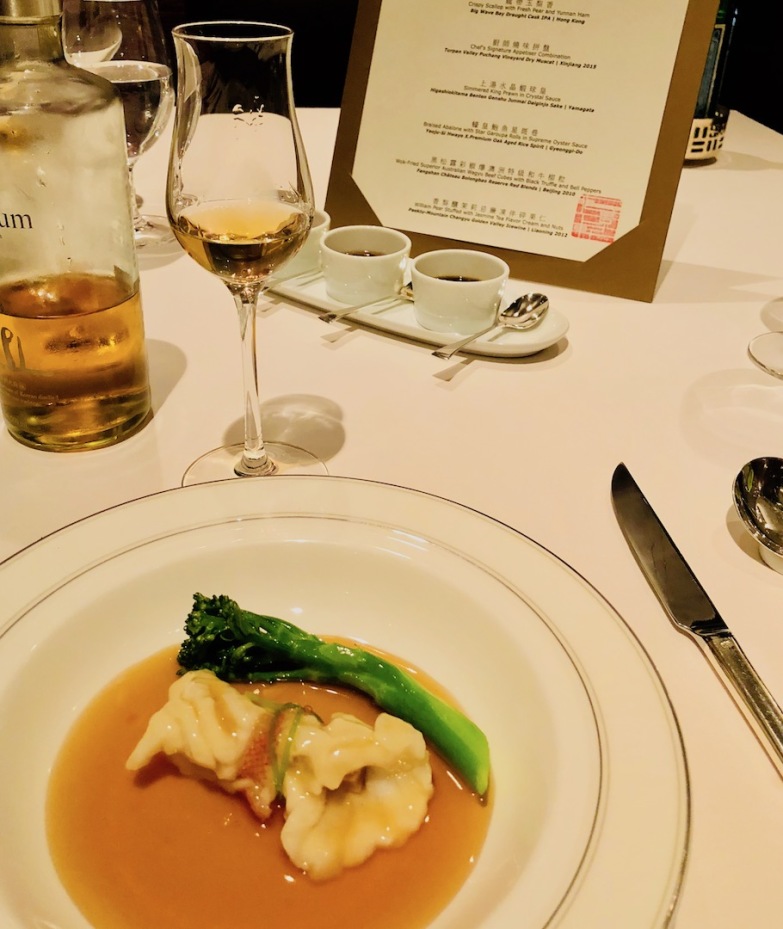 The next wine pairing also threw us for a loop because not only was it not a wine, it was a Korean shochu in the form of Yeoju-si Hwayo X Premium Oak Aged Rice Spirit. Served with the restaurant’s signature braised abalone with star garoupa rolls, the surprising vanilla and oak aromas from the shochu (a result of bourbon-cask ageing) combined with the strong rice flavours proved to be an intense pairing with the tastes and textures of the abalone, grouper and oyster sauce. Though we would have preferred something lower in alcohol content to complement the delicate ingredients of the dish, the intensity and complexity of the shochu added powerful elements to the layers of what is considered a twist on a classic Cantonese dish. 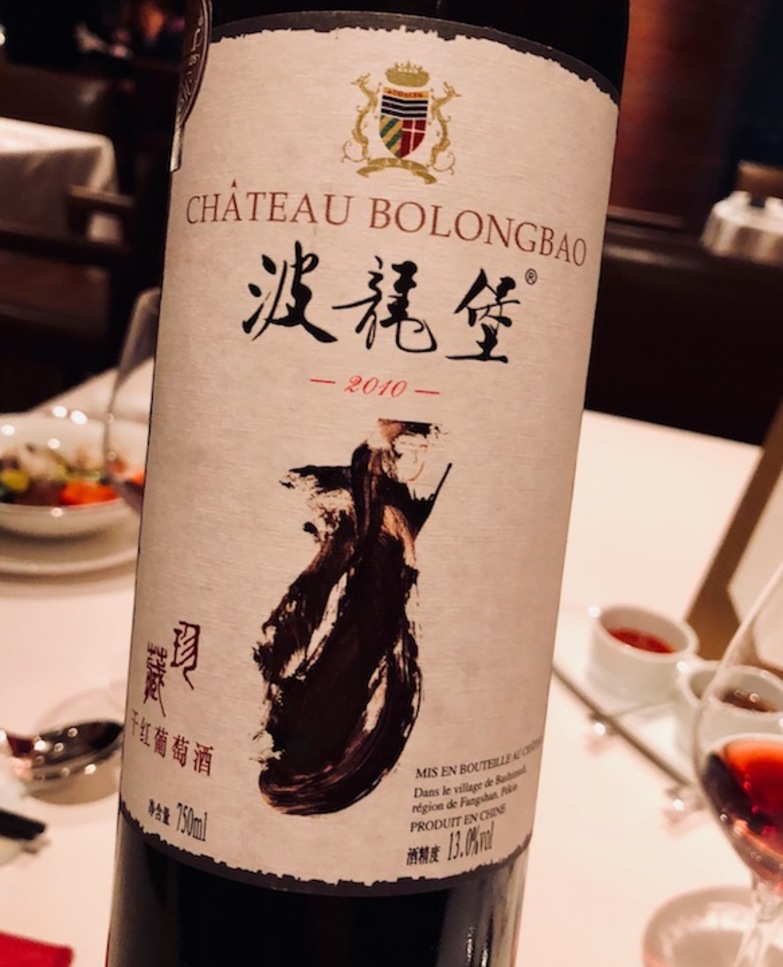 Following the seafood dishes came the popular wok-fried Australian Wagyu beef cubes with black truffle and beef peppers. Paired with Fangshan’s Château Bolongbao Reserve Blend 2010, we noted that this style of Right Bank Bordeaux from Beijing demonstrated a progressive evolution of Chinese wine. Loaded with spices, cedar aromas, tea notes and a heavy, plummy finish, given the Merlot-dominated blend, the tannins and long finish were deserving of the succulent beef cubes, yet the lovely tenderness, fat, subtle spice and truffle also cried out for the bright acidity and fruit of a Barbaresco or Sangiovese (which you can also order by the glass if you want to take a different turn in your Asian journey). 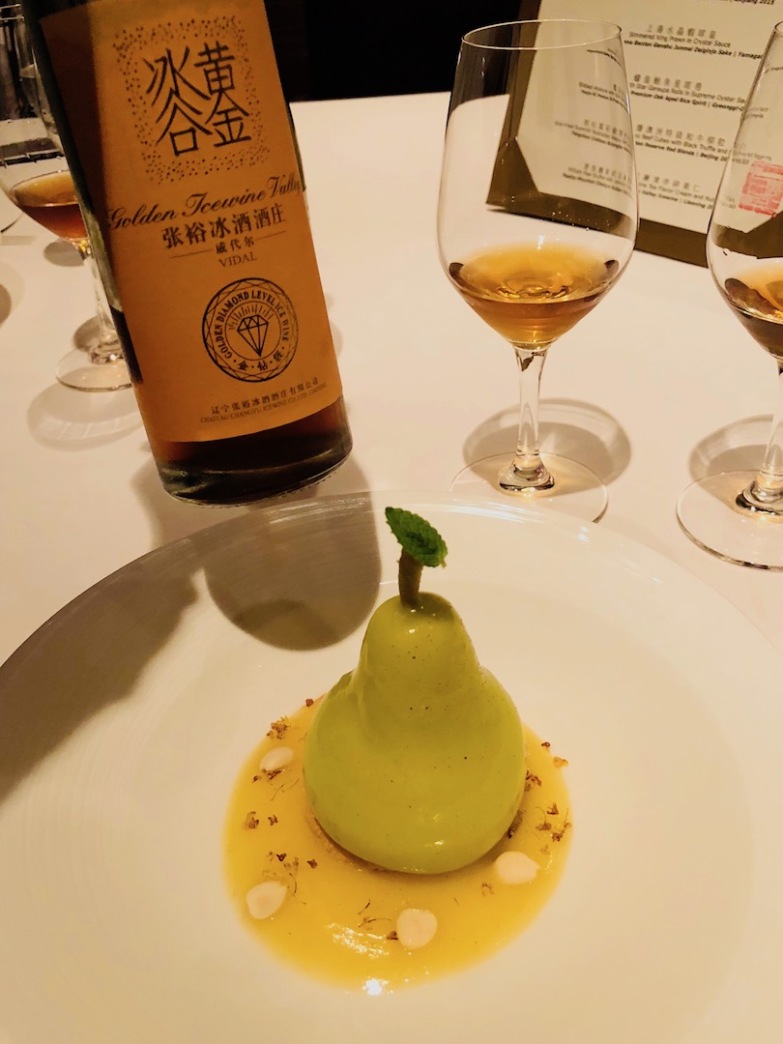 We ended on a sweet note with fan-favourite Williams pear stuffed with jasmine-tea-flavoured cream and nuts. Paired with Paektu Mountain Changyu Golden Valley Ice Wine 2012, we couldn’t help but take in the herbal whiffs of ginseng and soon began feeling its medicinal benefits. This wine is made from grapes grown in Liaoning, a region in China that neighbours Korea and that is known for its ginseng farms. For those who enjoy the flavours and aromas of ginseng or other strong herbal notes, the ice wine’s intense ginseng flavour profile proved to be a not-so-sweet, almost dry complement to the subtle sweet texture and taste of the stuffed-pear dessert.

For those who don’t like ginseng, we found the always appropriate Dr Bürklin-Wolf Scheurebe Riesling 1992 an equivalently luscious but more traditional option to end the meal.

We were pleasantly surprised by the spirit of adventure represented in the wine and spirit pairings with the Taste of Asia menu. Seasoned wine drinkers and wine enthusiasts alike will enjoy innovative pairings that represent the versatility and evolution of wines and spirits from around the region. Though a few of the selections were higher in alcohol content than we would have preferred given the delicacy of the dishes and ingredients, the overall experience helped to broaden our scope of regional wine and spirit selections for food pairings, offering a different lens through which to taste signature favourites at Lung King Heen. Given the diversity of wine pairings available, we recommend that groups of diners select different wine pairings according to the sommelier’s recommendations in order to truly get an opportunity to compare and contrast different wines from around the world.