As Kim Jong-un is to enriched uranium, Ah Chun Shandong Dumpling is to garlic. It is the only restaurant you’ve ever visited with an actual tub of the stuff, freshly minced, on the table along with the holy trinity: hot crushed chilli sauce, vinegar, soy sauce. Your wife is a wine drinker, but she immediately grasps the necessity for an ice-cold Tsingtao, just in case. You’re equipped for the onslaught.

Cold, fresh noodles arrive, just a little softer than you’d like, with sesame sauce, julienned cuke and minced pork atop. If you collapse from pleasure, this is the sesame sauce you want in your IV bag. You’ve never had better.

Fried mutton-leek dumplings and boiled pork-shallot dumplings are served, both from a master hand. The mutton here, unlike much you’ve had in Hong Kong, isn’t gamy. Pre-made dumpling wrappers are ubiquitous in the United States, and sadly, you see them in HK, the Temple of Dumplings itself. Ah Chun Shandong Dumpling stands firm on shifting sands. Their house-made versions are slightly thicker, chewier, far more satisfying than the interlopers. One elegant version actually negates light, black from squid ink.

The blistered string beans with dried chillies, crumbled pork and garlic would be better described as garlic with blistered string beans, dried chillies and crumbled pork, so prominent is the garlic in volume (wonderful, irregularly chopped pieces, some quite large) and flavour, almost raw. Still, compelled by a Freudian death wish, you add yet more garlic from the little tub provided. Like Spider-Man, you gain incredible strength and begin walking up the wall in order to hang upside down from the ceiling. There are screams from the other customers, or at least there would be, but as you’re about to ascend, your wife yanks you back with a gimlet eye.

Somehow the cucumbers fall short of their potential. They’re not pristinely crisp. Were they cooked a bit? Left to steep too long? The bloom of cuke is stifled and the anointment – what you take to be soy sauce, sesame oil, garlic, coriander – muted. Ah Chun Shandong Dumpling, get this right. Your glory is at stake. Would it be apostasy to say that The New York Times has a great recipe you might consult? Okay, it is apostasy, but it’s still true.

The Beijing pork is fab. While the addition of some tree fungus and tiger lily would give textural boost in the manner of classic moo shu pork, it is still toothsome in its thin homemade wrappers (sher ping) with hoisin sauce. These warm, fresh wrappers are as good as can be. The other day you had Peking duck at a famous restaurant in town much caressed by local pundits (who, it pains you to say, usually get their meals comped, which is known to increase objectivity). The wrappers – too thick, cold and clearly made at least the day before – ruined the dish, disinclining you from ever returning. It’s little details like getting the wrappers just right, making them fresh, serving them warm, that distinguish a fine restaurant from the hoi polloi.

The lamb chops, served cold, no sauce, no nothin’, are perhaps to some tastes, but you think a waste. There are other ones on the menu that are crisped and sauced that call out for future inspection.

Dessert is classic candied apples, a dish that fails regularly because it takes such finesse to get the sugar syrup exactly the right temperature to encase the battered, fried apples and then to harden in ice water. Often, the apples stick together and tear when pulled apart or everything dissolves in the water. Ah Chun Shandong Dumpling not only nails the dish – served fiendishly hot, each piece of apple separate from the next – but covers it in a nimbus of spun sugar. You wonder, why is this dish only made with apple or banana or yam? Mango would be amazing. Pear would be amazing. Fresh lychee could well transcend all other earthly pleasures. There’s so much possibility here that, as far as you know, has never been explored. 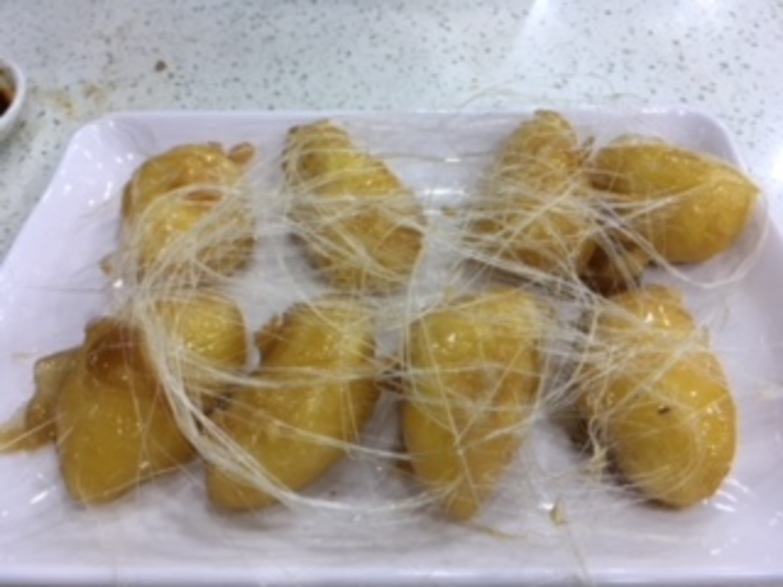 Ah Chun Shandong Dumpling’s food could not be mistaken for meek. It is lusty, rustic fare, notes of garlic and chilli dominant. Dessert is memorable. The menu has untapped range and the chefs are attentive to detail. You can eat your weight in garlic if inclined. The interior of the restaurant is functional and clean. Napkins are not provided, though you can buy tissues, so bring your own. Servers speak little, if any, English. Prices are remarkably low. They do not take credit cards. They do not take reservations. Until someone else snatches the crown, Ah Chun Shandong Dumpling is your favourite Chinese restaurant in Hong Kong. You highly recommend it.

The crowd parts in front of you as you walk to the MTR. Radiation detectors trip as you walk in. There’s a faint blue glow in your apartment when you turn out the lights. The garlic is potent.