The sign for Blue Supreme is quite hidden. Guests need to walk right up to the door to see “Blue Supreme Beer Purveyors” on the glass. What stands out instead is the neon sign saying “Live Beers” at the top of this stylish, concrete block of a restaurant. The first time I walked past it, I had no idea what it was. Usually, I don’t stop and stare at restaurants, but the stranger walking a few steps ahead of me did a dramatic double take, so I decided it was okay to do so too. It was marked as a “Google it later” in my brain, but then a few days later, I was meeting my friend at Blue Supreme for dinner (I didn’t Google it beforehand). When I saw her in front of the restaurant, I realised it was the exact cool spot I’d previously walked past. So whether you’re looking for Blue Supreme or just happen to stumble across it, this is why this spot is worth your time and money. 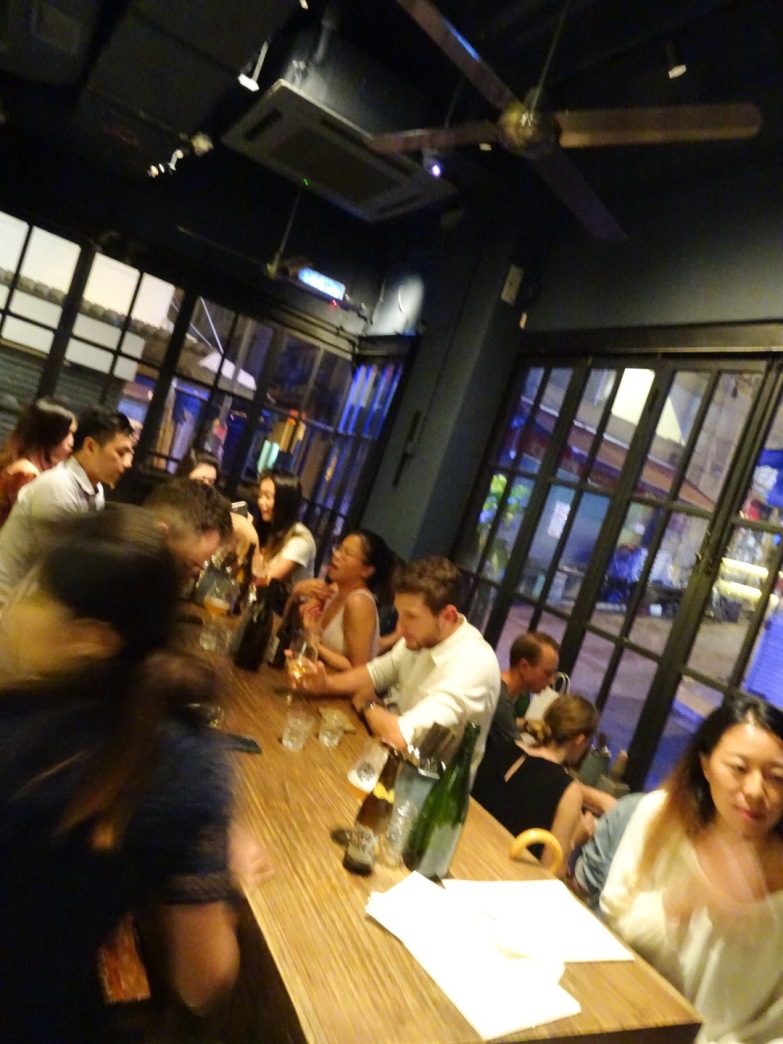 We visited on a Friday night, and the restaurant was loud and buzzy. There are some low tables on the right side of the restaurant and a high table on the left side that would fit small groups. There are also counter seats lining the front of the restaurant that would be good for pairs catching up or those on a casual date. But what really stands out is a large communal high table that takes up half the space. Blue Supreme has the fun vibe of a college bar, but in a sophisticated, adult sense. Take a listen to “My Blue Supreme” by Interpol, the song for which Blue Supreme is named, to get an idea of the ambience.

You won’t be thinking about college when the food comes out. The kitchen is helmed by Chef Leonard Cheung, a 25-year-old wunderkind who’s cut his teeth in Michelin-starred restaurants like Eleven Madison Park and Bo Innovation. He cooks up a unique “modern American bistronomy” menu that offers a refined take on bar food. Blue Supreme’s small menu (eight items or so) changes frequently, as in every few weeks – meaning that the Hainanese fried chicken that I’d spotted on Instagram was long gone by the time I was visiting. But I quickly forgot that craving when our dishes came out of the kitchen. 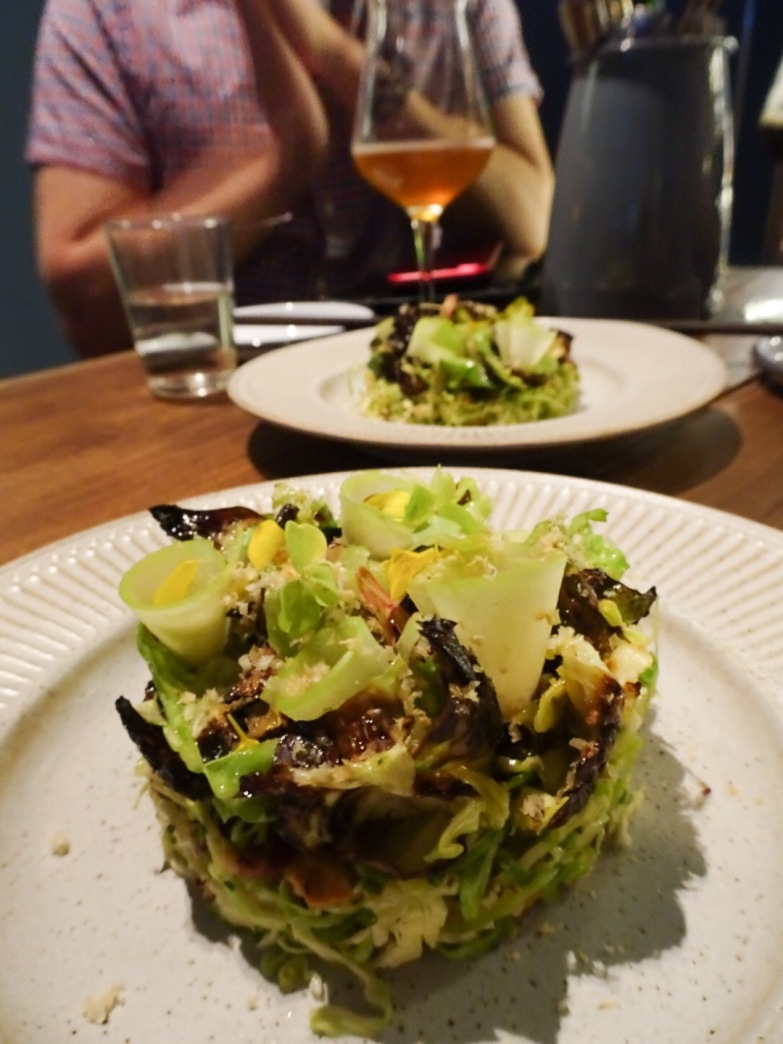 The Brussels sprout, hazelnut, bacon and green apple salad ($135) was awesome, being fresh, unctuous, sweet and bitter at the same time. The charred leaves were especially moreish, and there was a hint of spice from the use of Tabasco. The hazelnuts and bacon added weight. 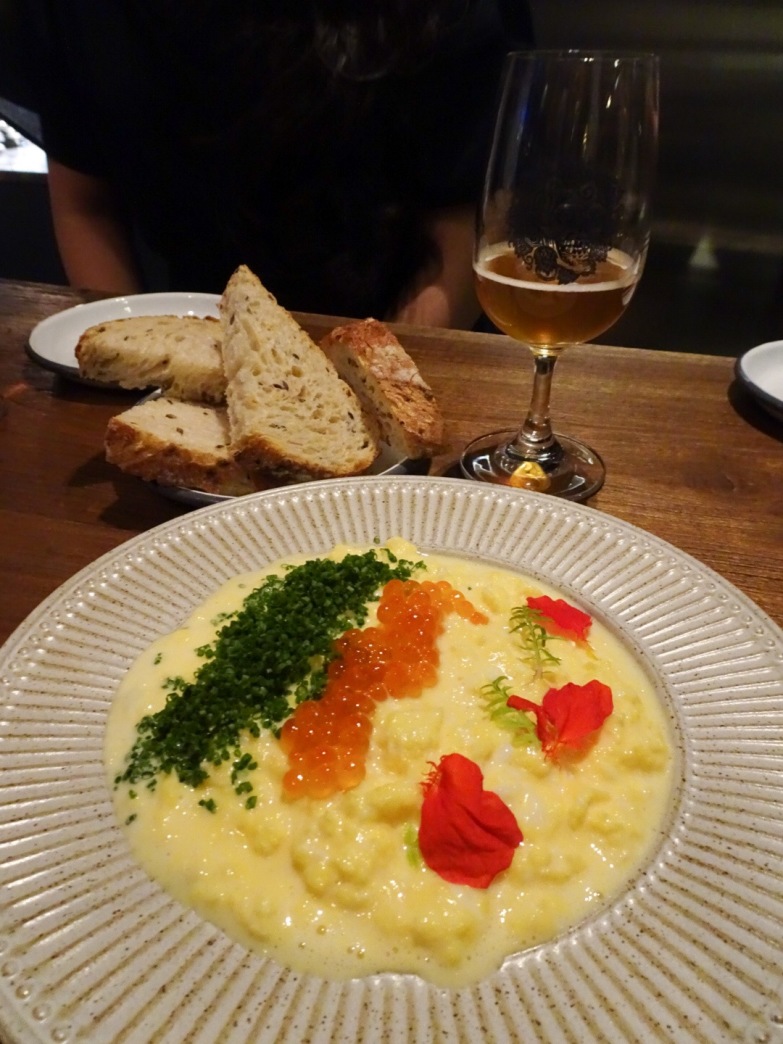 It’s always a treat having breakfast for dinner, and the soft scrambled egg with salmon roe and crème fraiche ($155) was lovely, served with thick-cut toast. 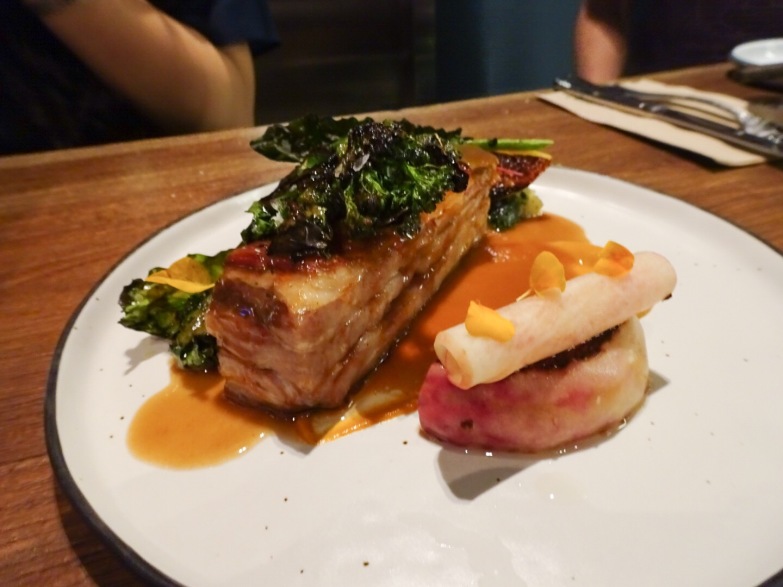 The Te Mana Lamb confit with harissa, stone fruits and broccolini ($210) was pressed then seared so that there was a nice, crisp crust on the top and bottom. It went well with the fresh, sharp salsa and grilled peaches. 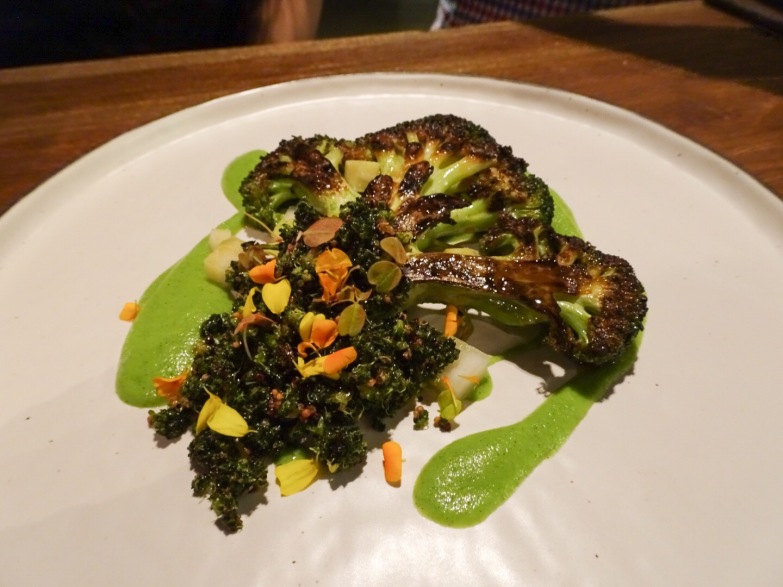 The broccoli steak with granola and lemon ($148) is an “order first and thank me later” kind of dish. Rarely has broccoli tasted this good! The florets were grilled and seasoned to be sweet and smoky, and some broken-up floret bits were scattered around the plate as “granola” (and in keeping with a less-waste policy, the stems were fermented and also served with the dish). 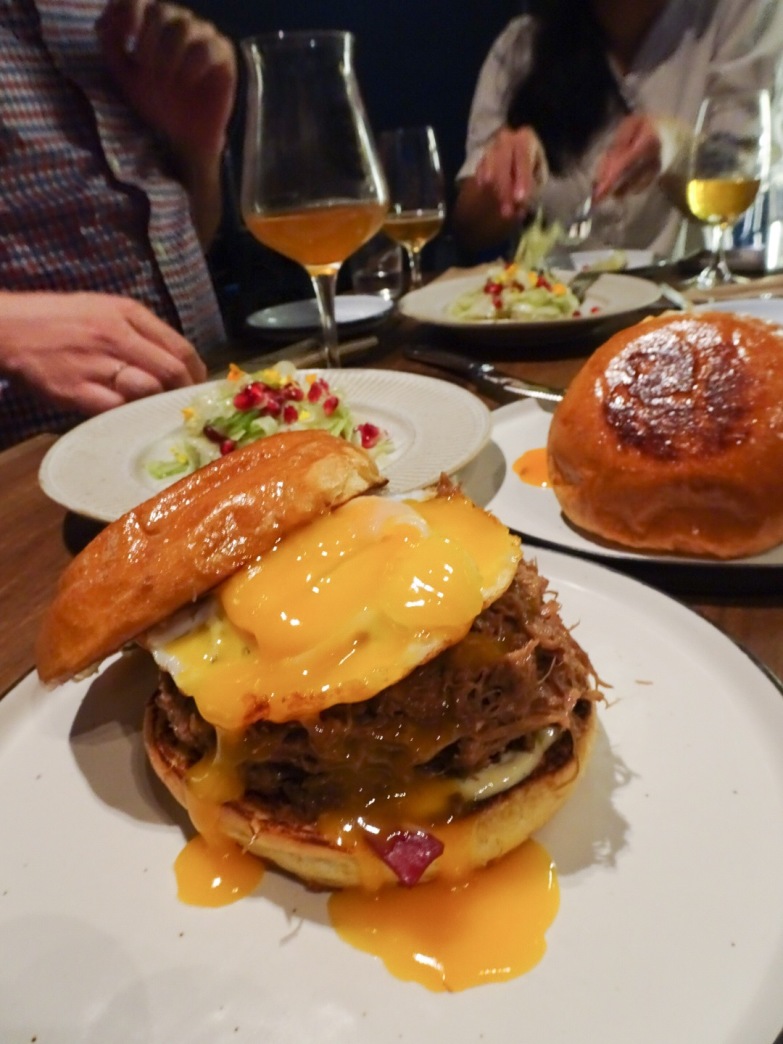 One of Blue Supreme’s signatures (i.e., it’s usually on the menu) is the duck-confit burger with fennel and pomegranate ($195). The price is high, but there is a generous amount of juicy meat in the burger, and the side of freshly shaved fennel salad with pomegranate seeds and a hint of horseradish keeps it from feeling too heavy. 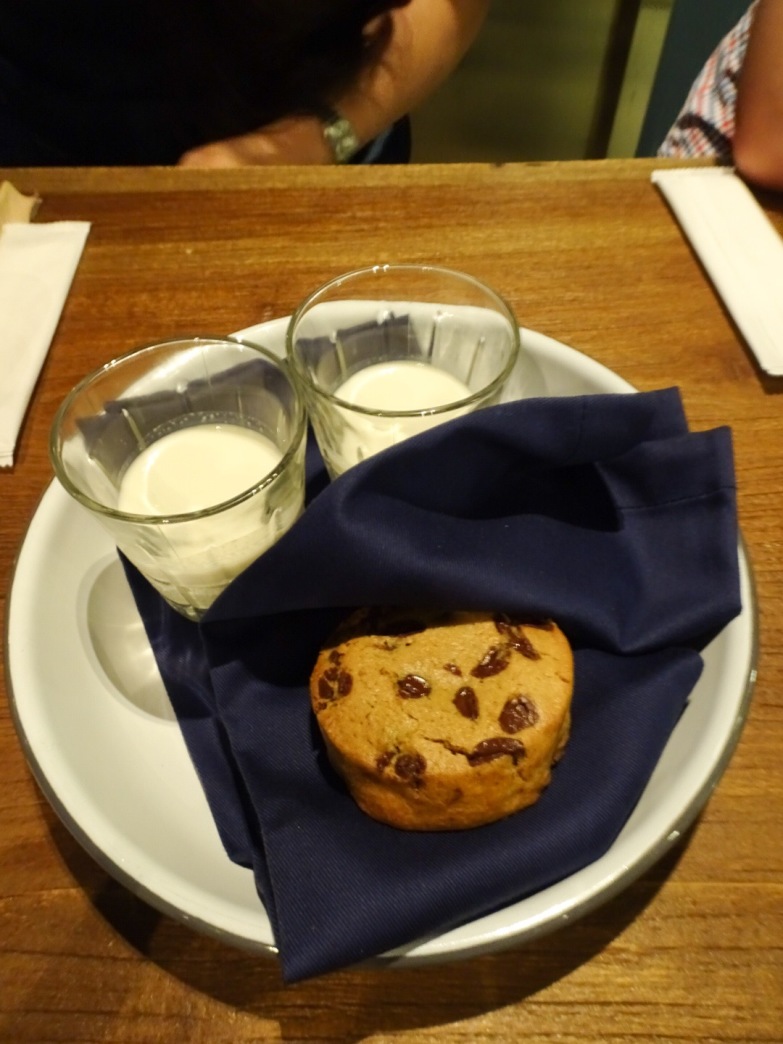 We ended with the milk and cookies ($60 for 2 cookies). For those who like chewy, gooey, American-style cookies, these half-raw babies will hit the spot. They’re so comforting and go perfectly with the mint-leaf-infused milk – an adult take on a childhood favourite.

Blue Supreme is founded by Ted Lai, a young beer enthusiast and first-time restaurateur. Ted is often around and more than willing to listen to your preferences and suggest beers; if not, the other staff are also very knowledgable. The drink menu is many pages long, but what Blue Supreme is most known for (hence the neon sign) is “live” beers from Belgium. Also known as bottle-conditioned beers, live beers have wild yeast added at the end, which results in a secondary fermentation with probiotics being present. Thus live beers continue to mature, evolve and deepen in flavour. Try one of the 12 live beers on tap if you get the chance.

With Blue Supreme being a beer-focused restaurant, each dish comes with a recommended beer pairing. While new to the concept of beer pairings, we tried the pairing of the Brussels sprouts with the Saison de Dottignies by De Ranke and were impressed by how the peach notes in the beer complemented the oily and bitter flavours of the dish. This was a new experience that could be fun for date night.

Or, if you’re not really into beer, I’d recommend the Cuvée Soeur’ise (bottled). This beer with cherry and redcurrant notes was jammy, slightly sweet and very drinkable.

There’s a lot to love about Blue Supreme. The vibe, food and beer are all great. Add in that it’s pet friendly and that it’s now serving up brunch on weekends and you’ve got the perfect hidden gem to impress both locals and out-of-town guests.

This write-up is based on an anonymous, independent visit. The meal was paid for by the author and no monetary compensation was provided in exchange.

First look: Craft Cocktails at Gutshot Pay Tribute to the Game of Poker

A speakeasy tucked away on Peel street, inspired by the game of Poker.