From egg tarts and wings to pasta and waffles

Hey, eggheads! Salted-egg-yolk fish skins and potato crisps have been sweeping the city, and it looks like other snack vendors are starting to catch on to the flavour trend. We’re diving straight into this briny, sodium-driven tornado and letting it take us through the wonders of haam daan. 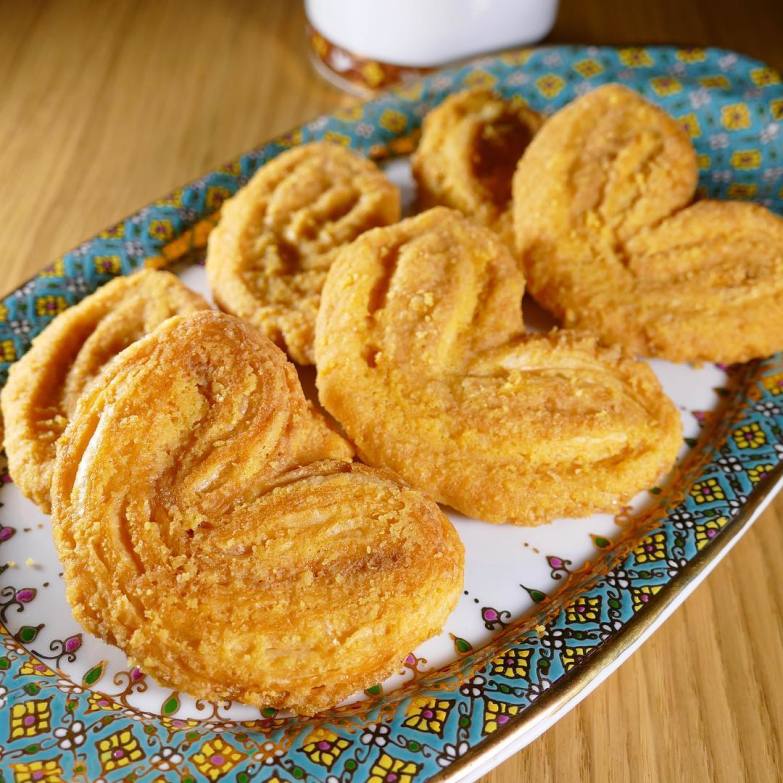 An unlikely union, but we’ll take it. The challenge to combine the sugary sweetness and delicate pastry of palmiers with the depth of salted egg yolk is a daunting one, but it seems that Caine Road boutique bakery Meltlyplace has risen to meet it. Just look at that crumbly egg yolk dusted on those golden palmiers... 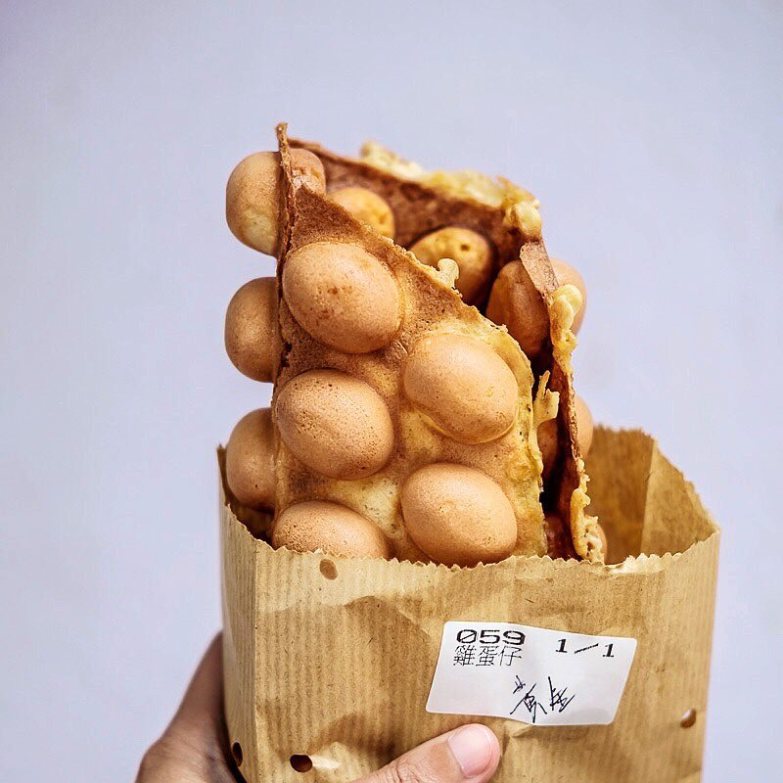 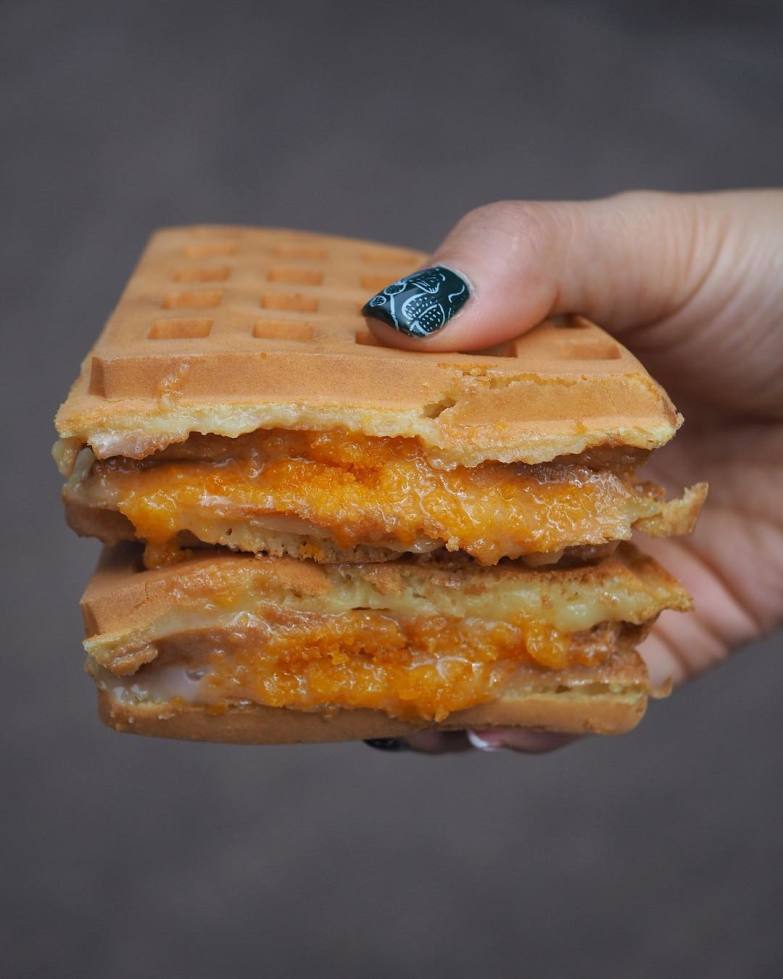 What better way to kill two birds with one stone than to combine salted egg yolk with some of Hong Kong’s most popular snacks? We’d expect no less from award-winning street-snack stall Master Low-key, which has shown time and again that its antennae are finely tuned to the latest food trends. This is a union we saw coming from a mile away (which is, coincidentally, just about how far away we’re usually standing while queueing up for a salted-egg-yolk-schmeared waffle from Master Low-key). 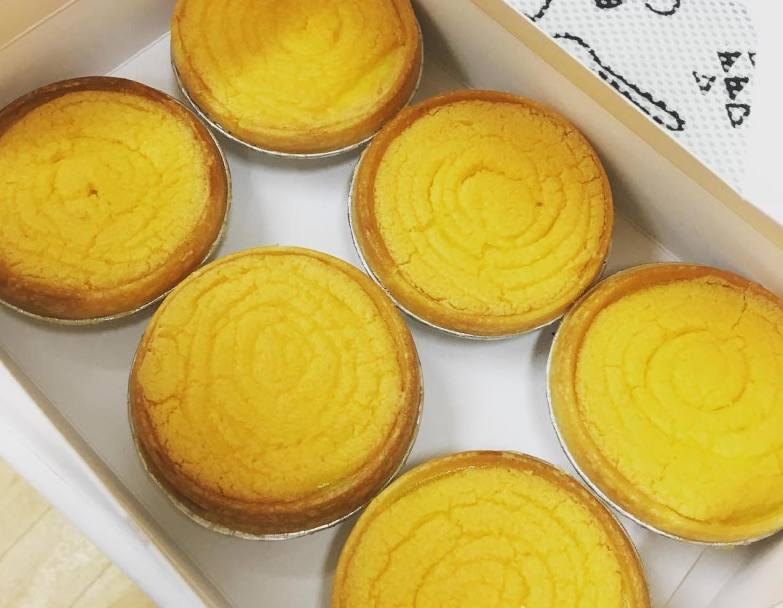 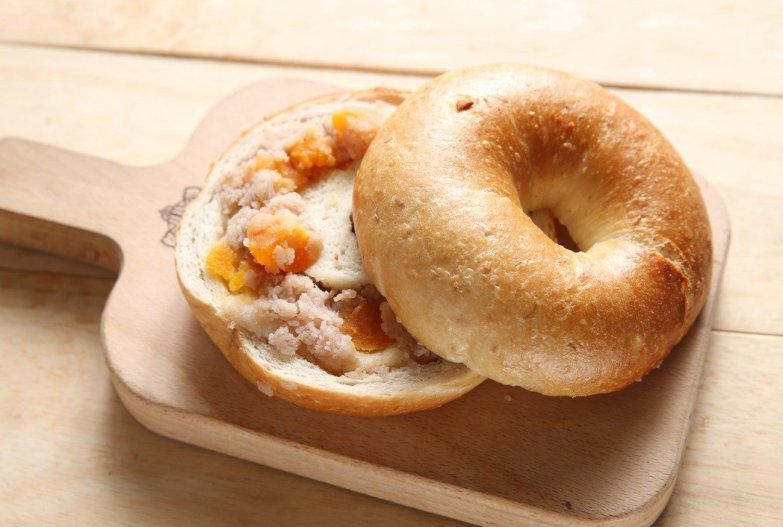 This is a time-sensitive one, friends. City’super in Causeway Bay is hosting a Taiwanese food market pop-up from 23 May–3 June 2018, and popular Taipei restaurant Good Cho’s will be making an appearance along with their taro and salted-egg-yolk bagels. You thinking what I’m thinking? 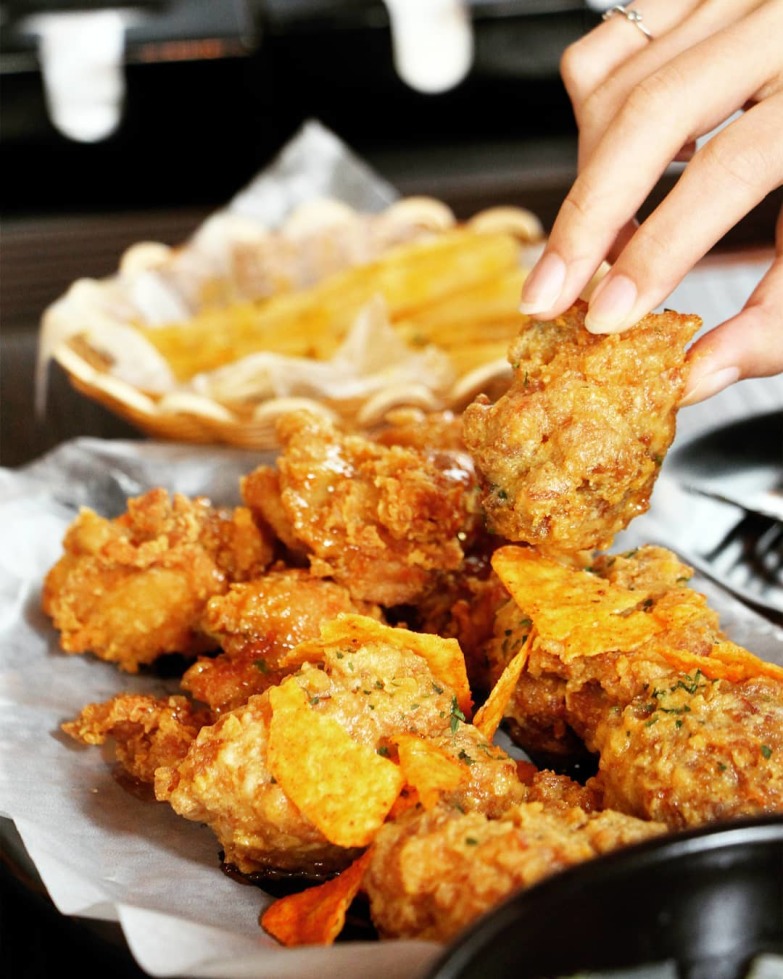 We don’t know what the chefs at Sodam Chicken were thinking – slap the baby egg back on mama chicken and call it delicious? – but we’re on board with this whack idea. Battered and deep-fried golden chicken chunks are elevated with a generous sprinkling of salted-egg seasoning, cranking the umami factor up to 11. Now that’s finger-lickin‘ good. Take note, KFC. 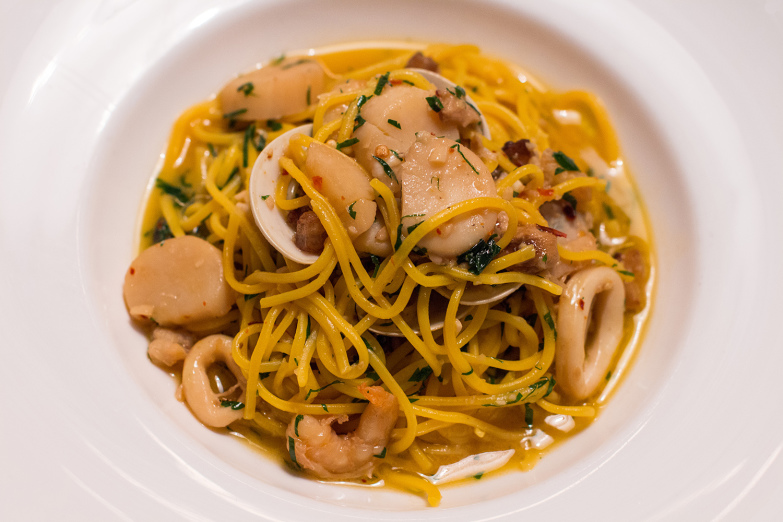 Linguini Fini is loved for many reasons, and their seafood linguine is one of them. We weren’t entirely sure what was so special about this pasta dish until we tried a bite and a wholly unexpected, savoury flavour of salted egg yolk bit right back. Dotted with scallops, shrimp, calamari, clams, a touch of homemade salumi and the holy trinity of roasted garlic, parsley and lemon, this was a polished little dish and surprisingly light on the palate for being loaded with such hearty, assertive ingredients. 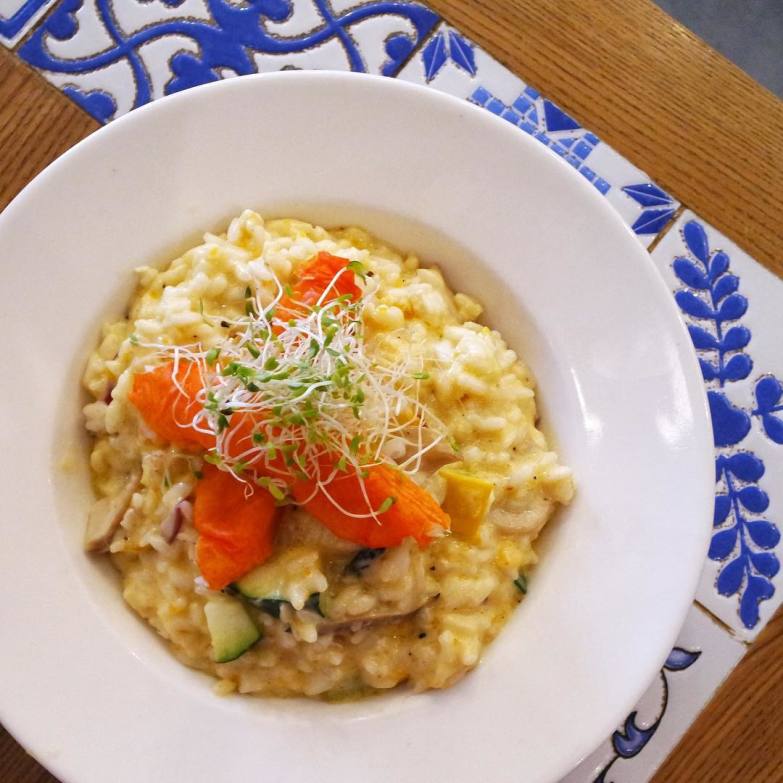 What is it? Salted-egg-yolk-cream-sauce risotto with Japanese crab stick. How do we feel about it? Incredibly keen. Overall, it seems like the sodium factor of this dish would be utterly overwhelming – there’s cheese and salted egg yolk – but the result is actually quite well balanced; a moderate and restrained amount of cheese allows the salted egg yolk to shine, while the crab stick and microgreens provide relief in texture and subdued flavour. Hami Harmony also does a salted-egg pasta if that’s more your jam. 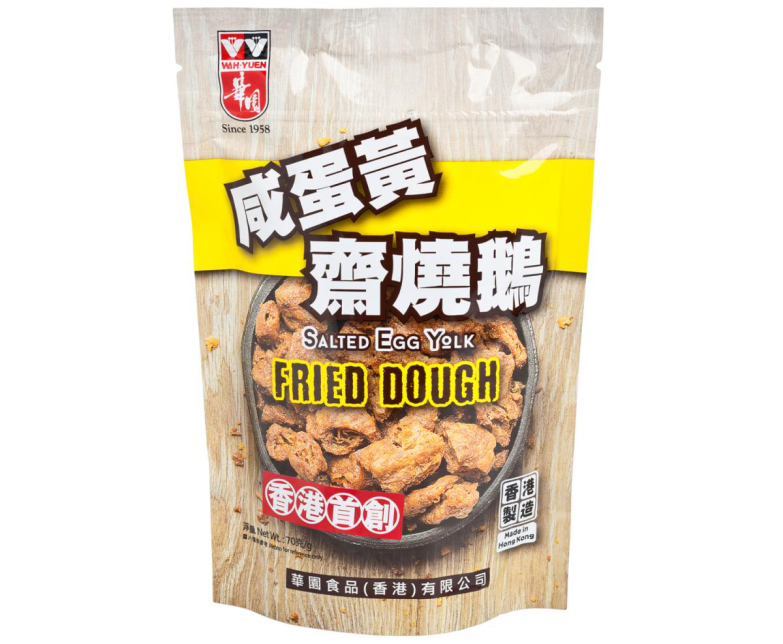 This one’s interesting. Marketed locally as vegetarian “faux” roast goose, Wah Yuen‘s fried-dough snack has been given a timely salted-egg-yolk makeover. We like that the flavour’s not too overwhelming, but we found the texture a bit too dry, which can only mean one thing: it‘s the perfect snack to accompany a round of beer! And it‘s readily available at PARKnSHOPs around the city. 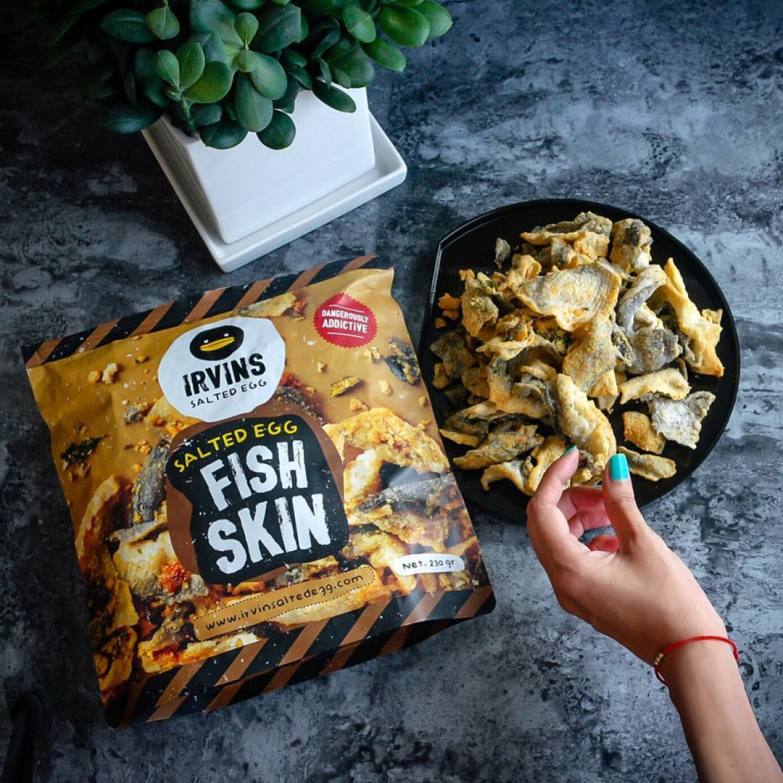 The winner of our salted-egg-yolk fish-skin Food War, Singapore’s Irvins is the likely culprit that sparked this whole flavouring craze, and the OG is showing no signs of slowing down. We’ll be the first to lay down our lives to defend their claim to being #dangerouslyaddictive; the depth of salted egg yolk followed by a medley of curry leaf and spices is simply unbeatable. Pair that with crisp fish skin, a wafer-like texture and just a hint of briny saltiness and we’re on cloud nine.