Currently valued at 51 billion USD, Uber operates in approximately 270 cities in 60 countries, using PR stunts like free pizza that keeps it bang in the middle of the public eye

I woke up on Friday morning and was greeted by a slice of the famous Artichoke pizza. Not physically – although I wouldn't have complained – but in my Instagram feed, because nycfoodgals (an Instagram profile that shares eats around the city with a following of 157,000 followers) had posted a photo of the oozing slice, heralding the good news Uber were giving away pizza at Two Boots and Artichoke all day and all one had to do to receive this glorious bounty was to "show your app". The pizza shops I stopped into were heaving and there stood an Uber rep at each, bestowing a free slice upon the eager queuers "showing their apps".  They were also giving out discount vouchers for the newly launched Uber Eats; a food delivery service that works through the "Uber model". "An Uber for sushi/ramen/tacos" as the tagline goes. 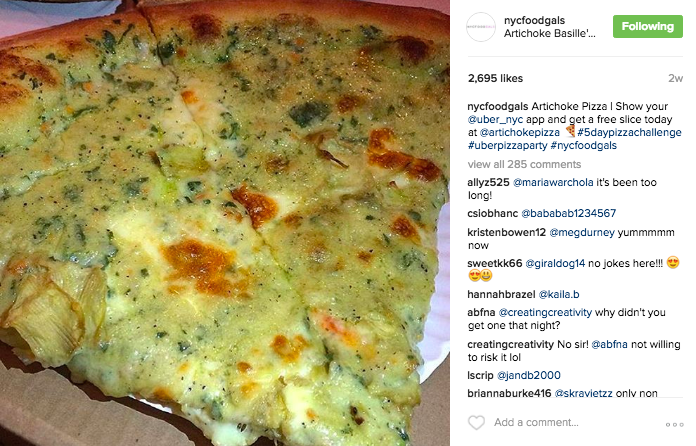 Currently valued at 51 billion USD, Uber operates in approximately 270 cities in 60 countries, arriving with the kind of bang that keeps it in the middle of the public eye (although not always for the reasons anticipated). 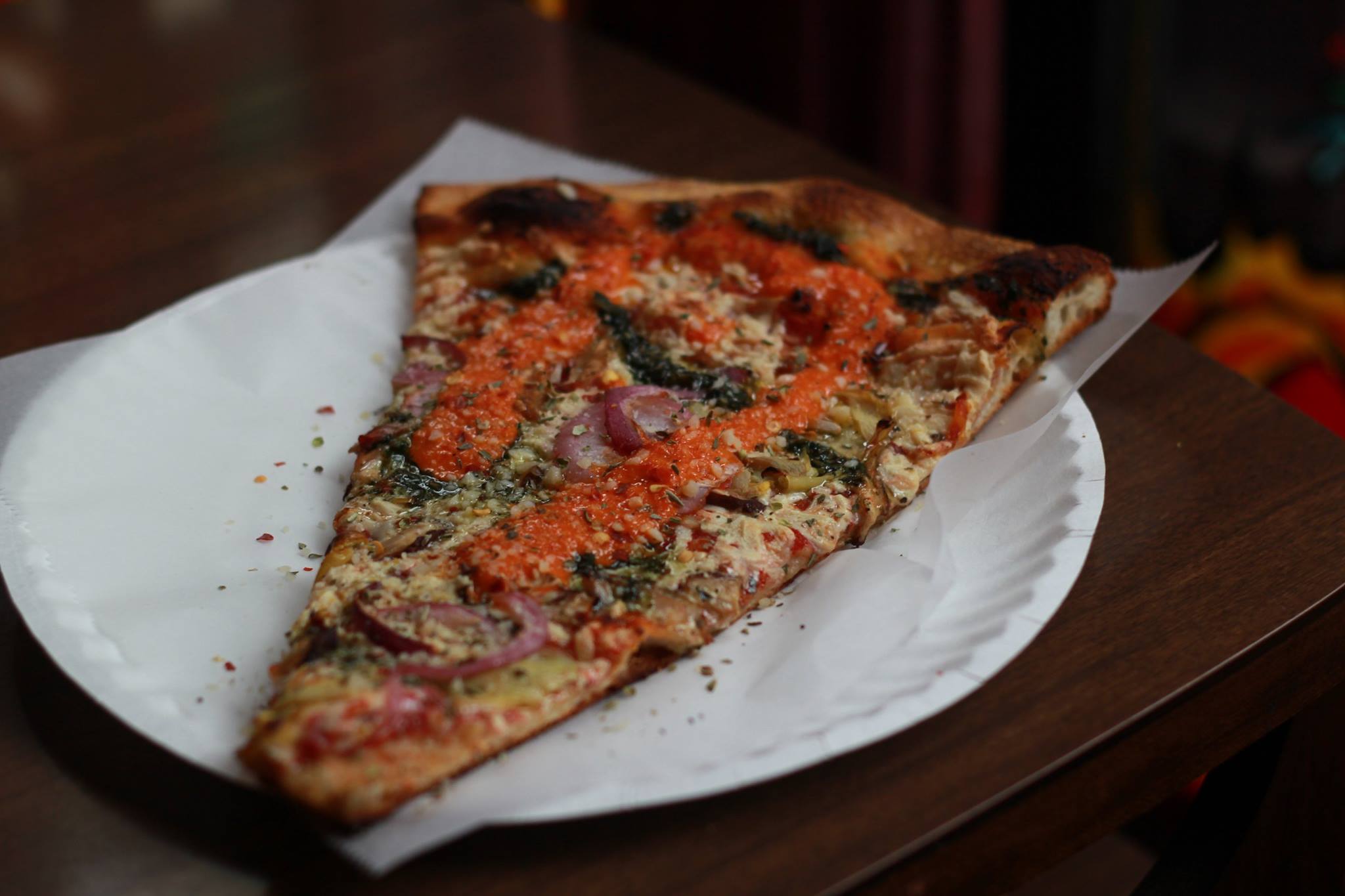 In 2013, Bill Gurley of Benchmark (who invested in Uber) observed that Uber was "growing faster than eBay did". Benchmark invested in eBay in 1997, laying down the no-small sum of $6.7 million. In the following two years, eBay was worth more than $5 billion according to Techcrunch. Uber has now usurped even this tech stalwart. Gurley says:

After a $1.2 billion investment round which took place in August 2015, sources like the Nasdaq and CNN Money estimated Uber should be valued between $40 and $50 billion. Not bad for a company founded in 2016.

What has spurred Uber's massive growth around the world? Part of the answer lies in their ability to tailor campaigns and offerings to cities in largely unprecedented scale with profound acumen into the local market. Implementing localization that scales but remains uniquely bespoke, executed with insight, Uber has leveraged their appeal to selective markets to spur growth, accruing new users and making marketing waves along the way. 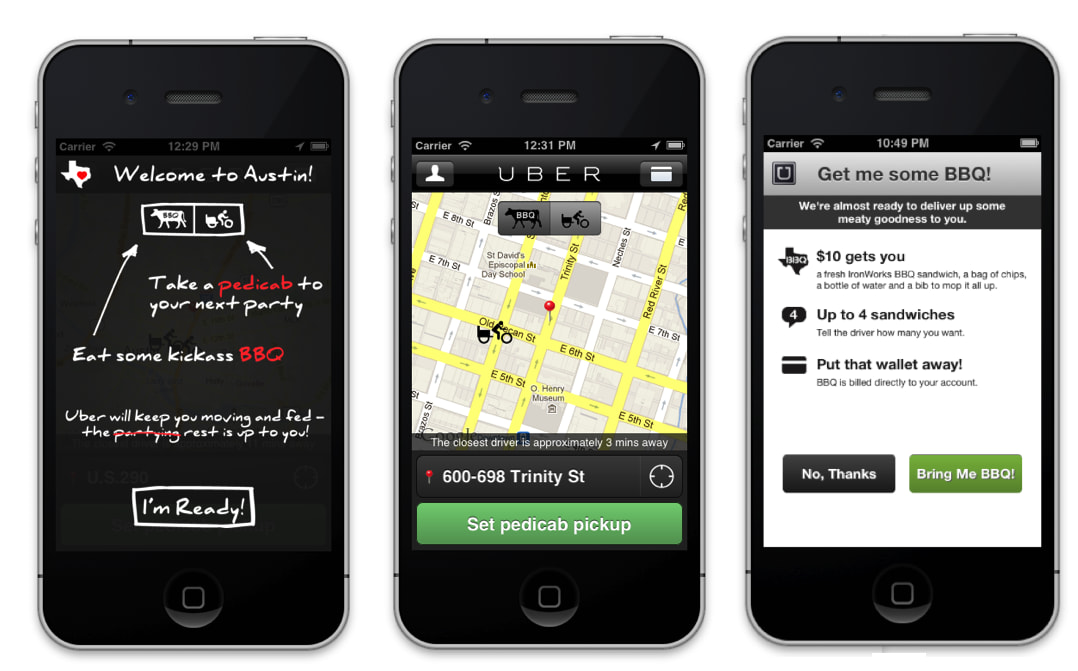 In Texas this looks like on-demand barbecue, and in New York; UberCHOPPER helicopter rides to the Hamptons. In Australia, puppies were available on demand to work places for a day, much to the delight of office workers (at a surcharge of 40 AUD which went towards animal shelters). Kalanick has a vision for Uber to be a service that offers "instant gratification" giving the people what they require, whenever they require it (with a specialisation in immediate dispatch), whether in the form of a ride or another type of delivery.

In New York, this strategy gracefully integrated social media's pervasive mass communication capability, the city's penchant for trends and anything edible that necessitates queuing, and arguably New York's most beloved food: a slice of pizza. Uber employees were positioned for one-on-one engagement with users and potential users (I witnessed first hand an Uber rep assist at least 13 people in downloading the app in less than 40 minutes), Instagram feeds were spammed with pictures of pizza and the accompanying hashtag #UberPizzaParty–in some cases garnering thousands of likes, shares and tags–and queues out the doors of both Two Boots and Artichoke had passers-by curious as to why there were throngs making their way into these pizza places at 2pm. The ripple effect seemed to go further than just those who physically witnessed the event, as there was not one conversation I had over the following weekend which didn't include "Did you hear Uber gave out free pizza and rides last week?" at some stage. 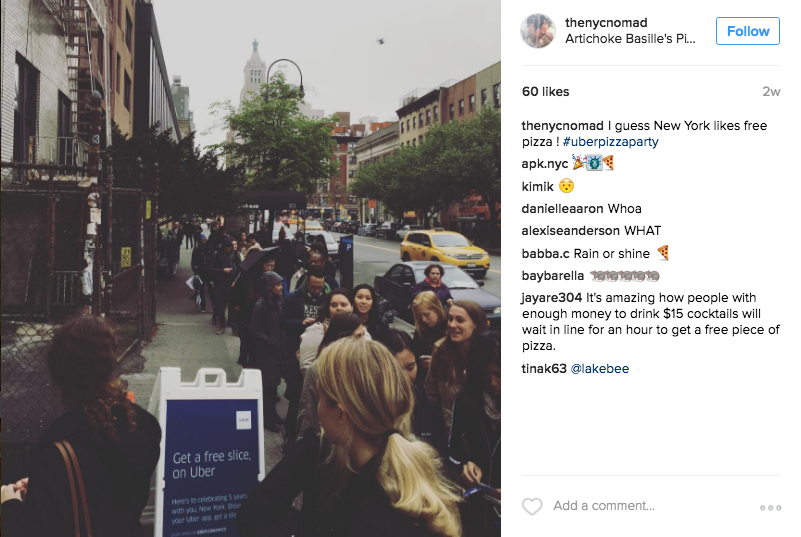 Experiences, collaboration with popular restaurants, and influencers, plus experiential word of mouth are becoming signatures of Uber's style. A style that's seemingly relentless in it's expansion.

Forget bitcoin, pizza is what we'll be trading in 2016.