Believe it or not, the best fried chicken in Hong Kong can be found at a fast food chain

When life throws a lemon at you, don't make lemonade. Instead, chuck away the lemon and grab some fried chicken. There is nothing – I repeat, nothing – that a hot, crisp and juicy piece of chicken can't fix. Whether you are hungover, depressed, heartbroken or suffering from a horrible day, biting into a good piece of fried chicken and hearing that comforting crunch will instantly brighten your day. However, the problem with Hong Kong is that there simply isn't good fried chicken anywhere. We, as a city, just don't do fried chicken well. Sure, there are articles titled '5 best fried chicken spots in Hong Kong', but as someone who has actually sampled a lot of the fried chicken destinations on these lists, I can honestly say a lot of the chicken is not very good and is also tremendously overpriced (looking at you and your concrete-hard chicken, Stone Nullah Tavern). When I am in need of a pick-me-up or a quick chicken fix, here is what I do. I head to Connaught Road in Central, to Jollibee.

Jollibee is a Filipino fast food chain. It has only three locations in Hong Kong – two in Central and one in Mongkok – and is relatively unknown amongst the city's local population. Walk into the shop and you'll hear more Tagalog than English and Cantonese as most of the restaurant's clientele are from the Philippines (for many of my meals, I was the only non-Filipino in the entire place). Before you chastise me and take away my 'foodie creds' for promoting – or even simply just reviewing – a fast food chain, hear me out, for Jollibee does serve the best fried chicken in Hong Kong (ignore the fact that they call their fried chicken 'Chickenjoy' – after all, when it tastes like heaven, they can name it whatever they want). 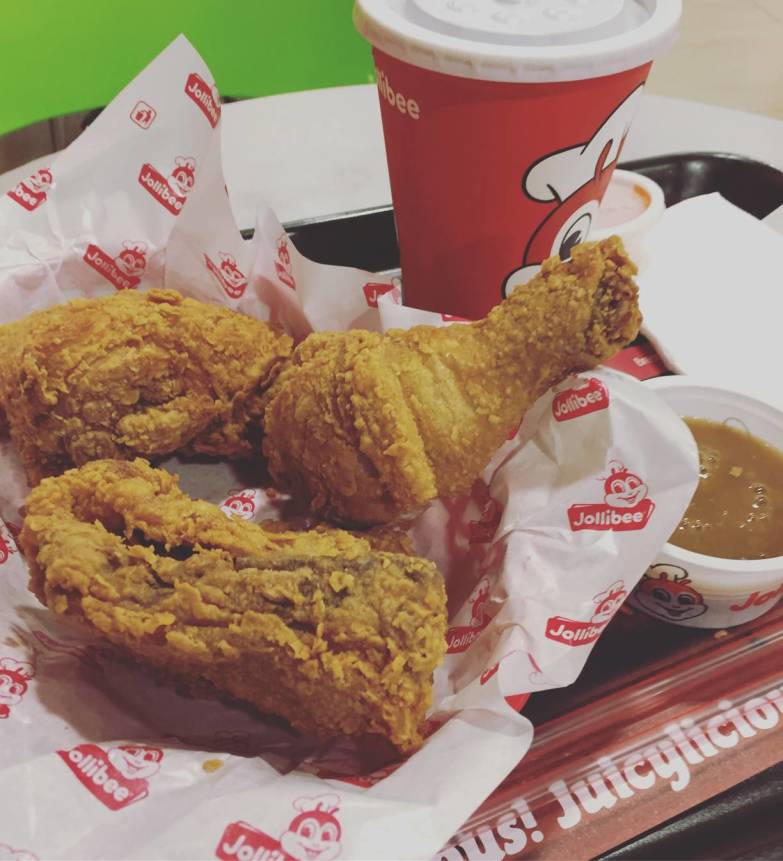 I mean, just look at the picture above. That is a thing of beauty. Each individual piece of chicken is breaded with a secret coating and fried until perfectly crisp and golden in colour. Bite into it and you will be greeted with an explosion of steam, chicken fat and juices. I have eaten numerous fried pieces of bird in Hong Kong, but I have yet to encounter a piece of fried chicken as juicy as the one here. Eating at Jollibee is a fantastically messy ordeal, and I love it. There is a certain primitive feeling of joy that comes from picking up a piece of piping hot chicken, tearing it apart with your bare hands and having chicken juices drip down your forearms while you devour the entire thing.

But let's return to the chicken. The skin is as crispy as breaded, deep-fried things get, and the succulence of the meat reminds me of something that has been brined for a prolonged period of time. It is juicy and so tender that it can be torn from the bone simply by applying pressure with a fork. Sure, such an effect may be achieved by soaking the meat in a mysterious blend of tenderising chemicals, but ignorance is bliss, and you and I will just casually overlook such a concern, shall we? And you definitely should – when something tastes as good as this, why would you worry about such formalities and trivial matters? And to make things even better, Jollibee serves gravy with their chicken rather than the standard meh that is ketchup (also brownie points to them for labelling ketchup as catsup – I bloody love it). It tastes like packet gravy, the ones you find in school canteens and sloppily prepared Thanksgiving dinners. But curiously, I'm hit with a pang of nostalgia and find myself enjoying the gloopy sauce way more than I should. It meshes well with the chicken, but then again, what doesn't?

Everything else on the menu can be disregarded. The fries look fantastic but turn limp and flaccid within a few minutes. Still, they're well seasoned and edible, unlike the radioactive, orange-coloured palabok (a shrimp-based noodle dish), which tastes like the inside of a fisherman's boot: fishy, musky and yucky in every single way. Disregard all this and go for the chicken – add an additional piece while you're at it, since Jollibee won't hurt your wallet like other fried chicken joints in the 852. It costs $43 for a standard two-piece Chickenjoy set, and a seven-piece bucket set goes for a neat $108.

Years ago, I read a very interesting statistic. McDonald's is the most popular fast food chain in every country that it has spread its roots to, barring one. That particular outlier is the Philippines, where Jollibee reigns supreme, above the golden arches of McDonald's and the creepy, ever-smiling face of Colonel Sanders. And you know what? I think the Filipino population have nailed it.