Spanish cuisine has a very firm footing in Hong Kong, to say the least. What makes QUE MO a constant top contender amidst a sea of Spanish eateries is not just their commitment to authenticity, but also their willingness to constantly add new, innovative flavours to their menu.

QUE MO recently introduced a new executive chef with an impressive resume. Chef Martin Carrasco’s extensive knowledge of both traditional and modern techniques was cultivated in the kitchens of numerous Michelin-starred restaurants in Barcelona like Neichel, Via Veneto and Alkimia. 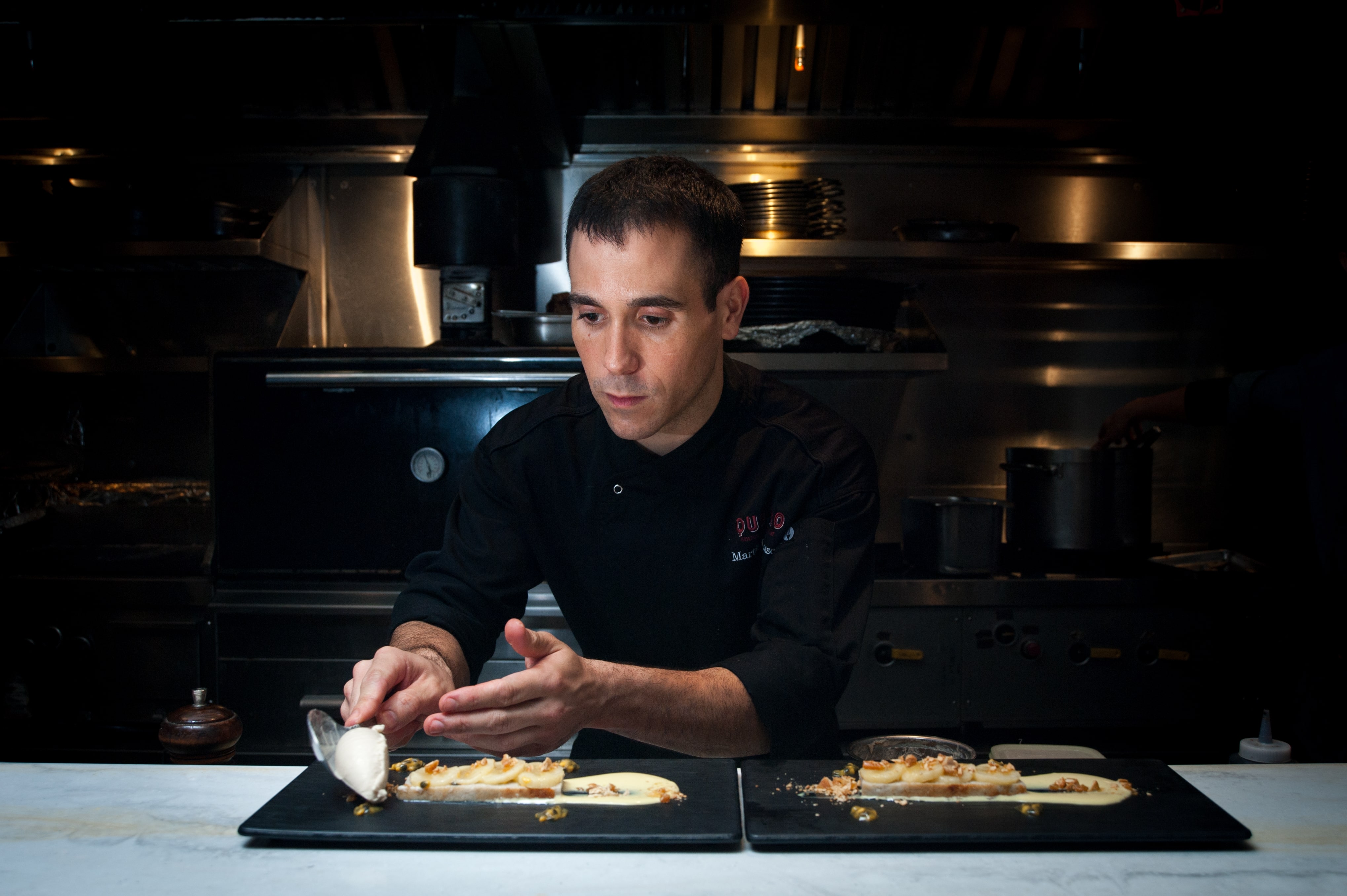 We were off to a great start with his new curated menu when we sampled the Dona Lola 100% Iberico acorn fed ham. Dona Lola is one of the very few suppliers left in Spain that follows the very traditional curing process. Rather than factories, picture fatty legs packed in salt and hung to dry inside wooden cabins on top of vast, snow-capped hills while barraged by the crisp cool winter air (insert Sound of Music tune, or whatever is more fitting for winter). Testament of their firm adherence to both food quality and authenticity, they even have a team of professional Spanish carvers present to make sure the ham is properly sliced. The hams presented that day were all cured for 40 months and were divided into four different parts. 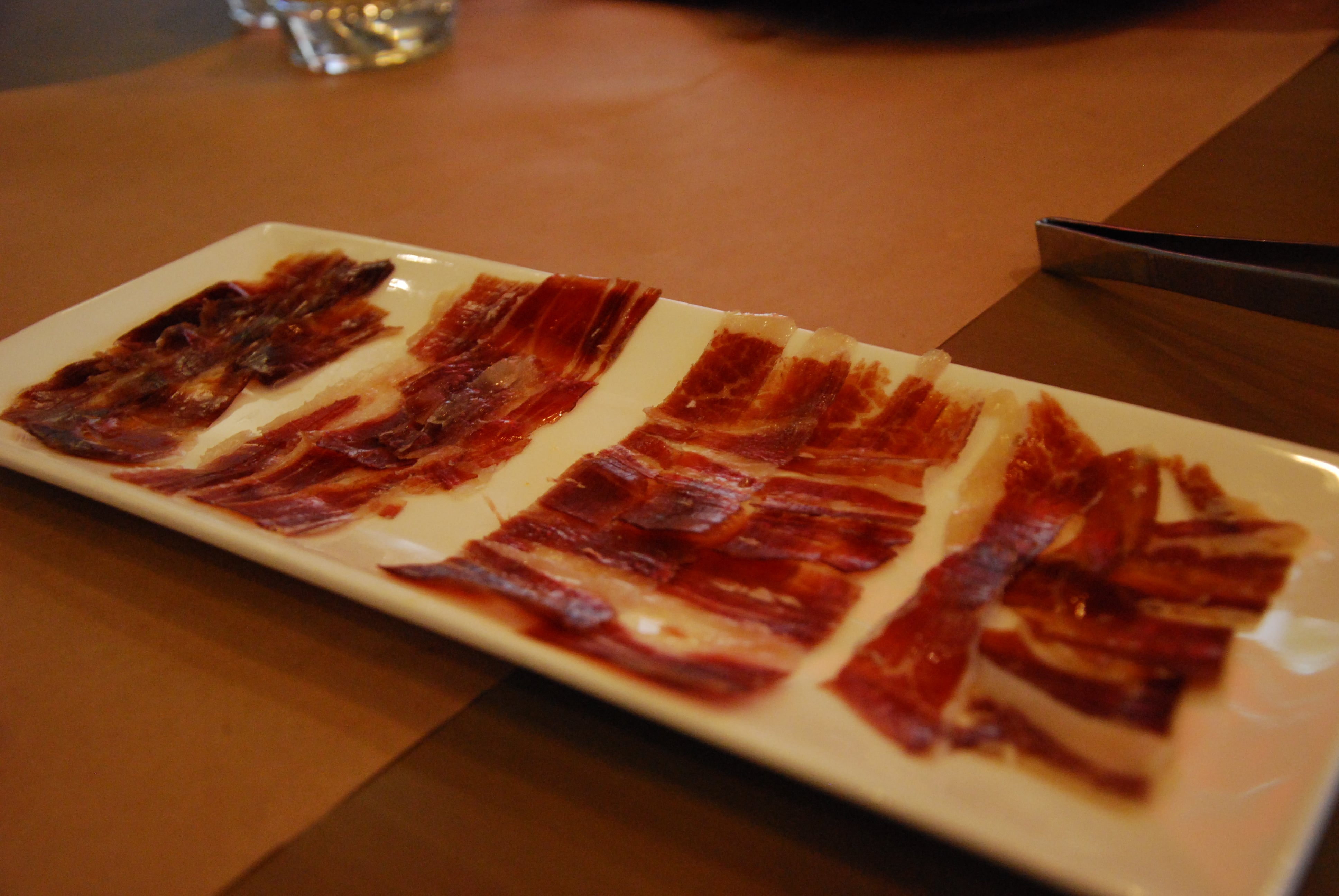 The greatest differences between the various parts were the textures and how fatty they were. They were all wonderful, but we found the Maza particularly rich and juicy. 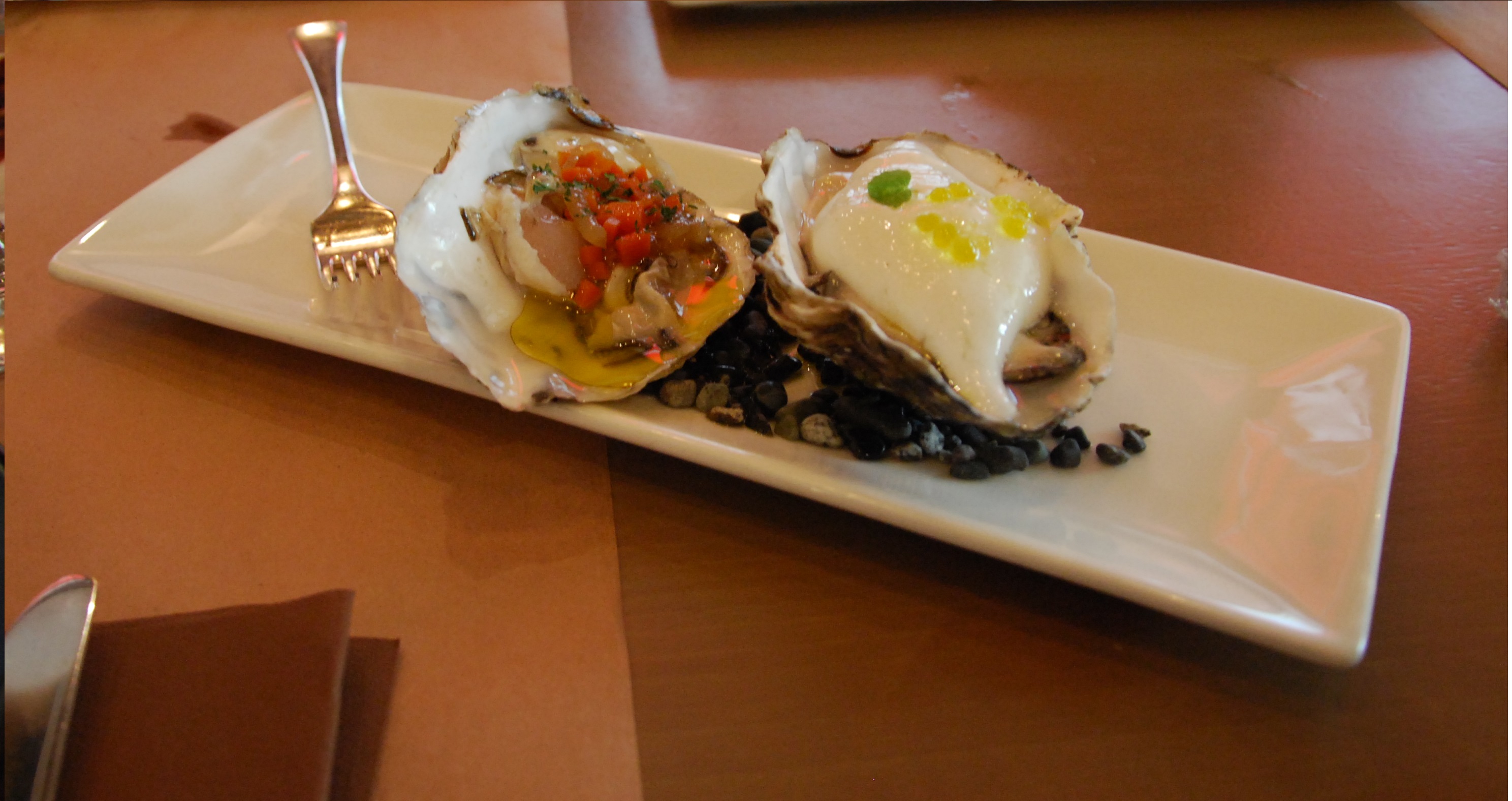 Following was the giant Spanish oysters duo foam. The super plump oysters were imported from Galicia, the most seafood-abundant region of Spain, and tasted freshly yanked out of the sea. We found the gin foam on the first of the duo a tad  bland, but the other seasoned with a diced tomato and olive oil combination really served to elevate the already rich umami flavour. 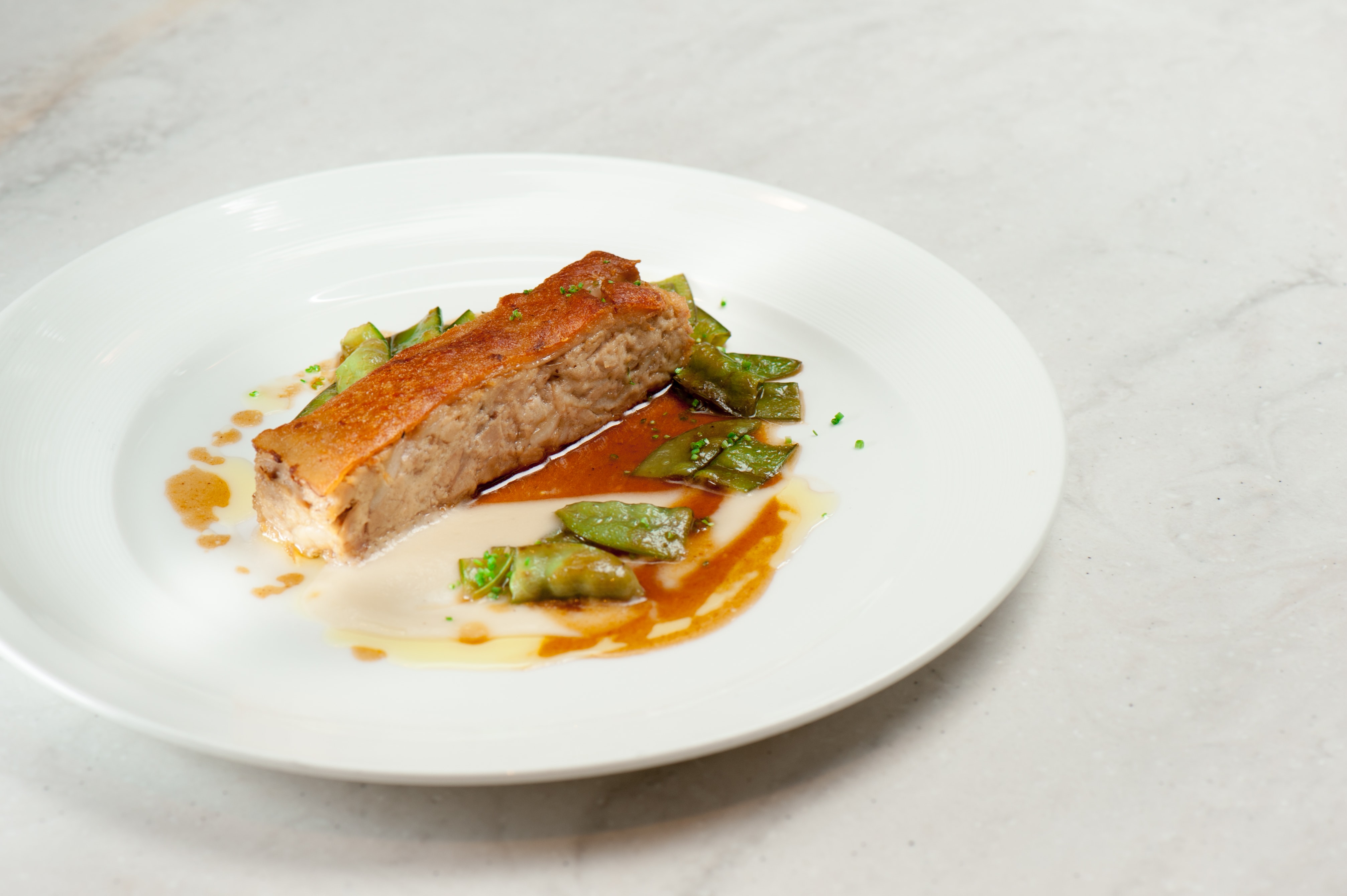 The highlight of the meal was certainly the slow-cooked suckling pig terrine with potato foam and seasonal vegetables. An inventive take on pig, the meat was slow-cooked for 12 hours before being shredded down to smaller pieces and made into the base of the terrine. It was then topped with crunchy crackling which displayed an amazing textual contrast to the butter-knife-tender meat base. Definitely, definitely try this or you’ll regret it. 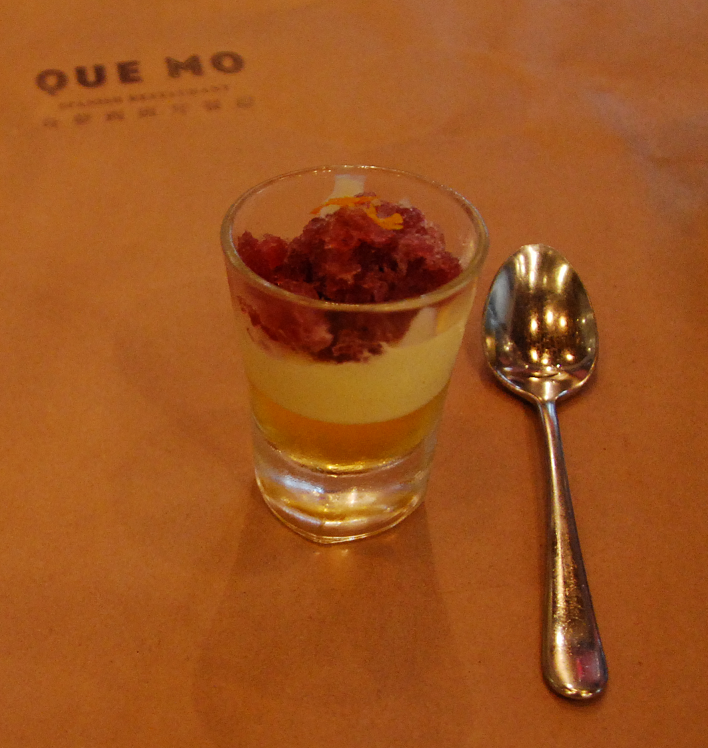 In a multi-course, sumptuous meal, having palate cleansers is a common custom that helps keep the meal on course, sort of like a reset button for your taste buds. Diners often overlook this little item tucked in the middle of a meal because they are, for the most part, bland and uninspiring. This is not the case for QUE MO though. The jelly & cream Licor 43 with sangria snow was simply amazing. It’s a three-layered dessert that has a jelly and cream base made with Licor 43 (a vanilla flavoured Spanish liqueur that’s made with fruit juices), citrus ice cream in the middle and sangria snow and orange zest sprinkled on top. It was so tasty and also light and refreshing at the same time that we actually felt bad for this item not deserving its own place under the dessert section. 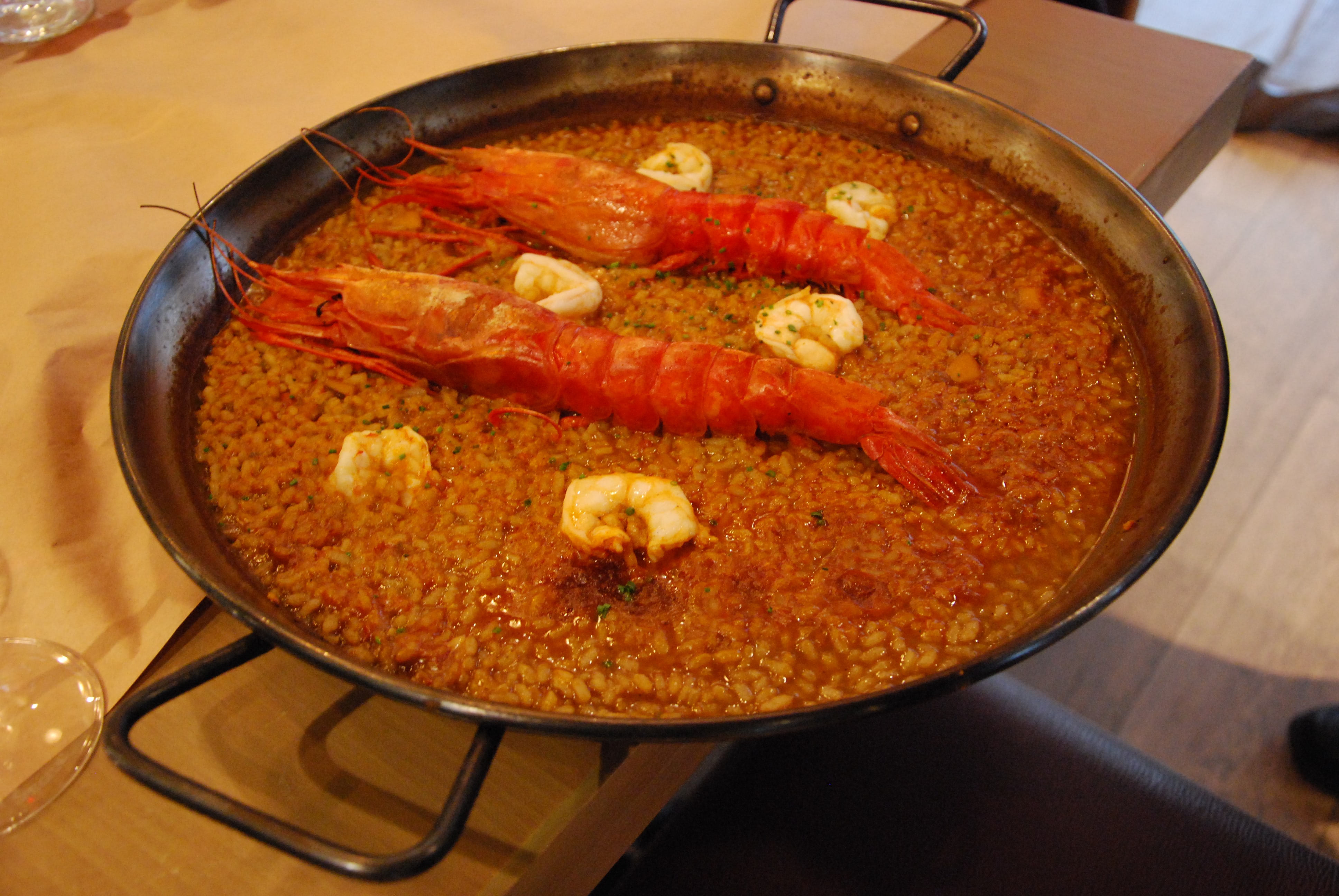 Next up was the Mediterranean red prawn soupy rice. The sheer size of the prawns had us marvelling even before we munched on the sweet-fleshed crustaceans. The rice itself was much more watery than the typical Spanish paella, and we loved it because the soup was brimming with rich seafood flavour. 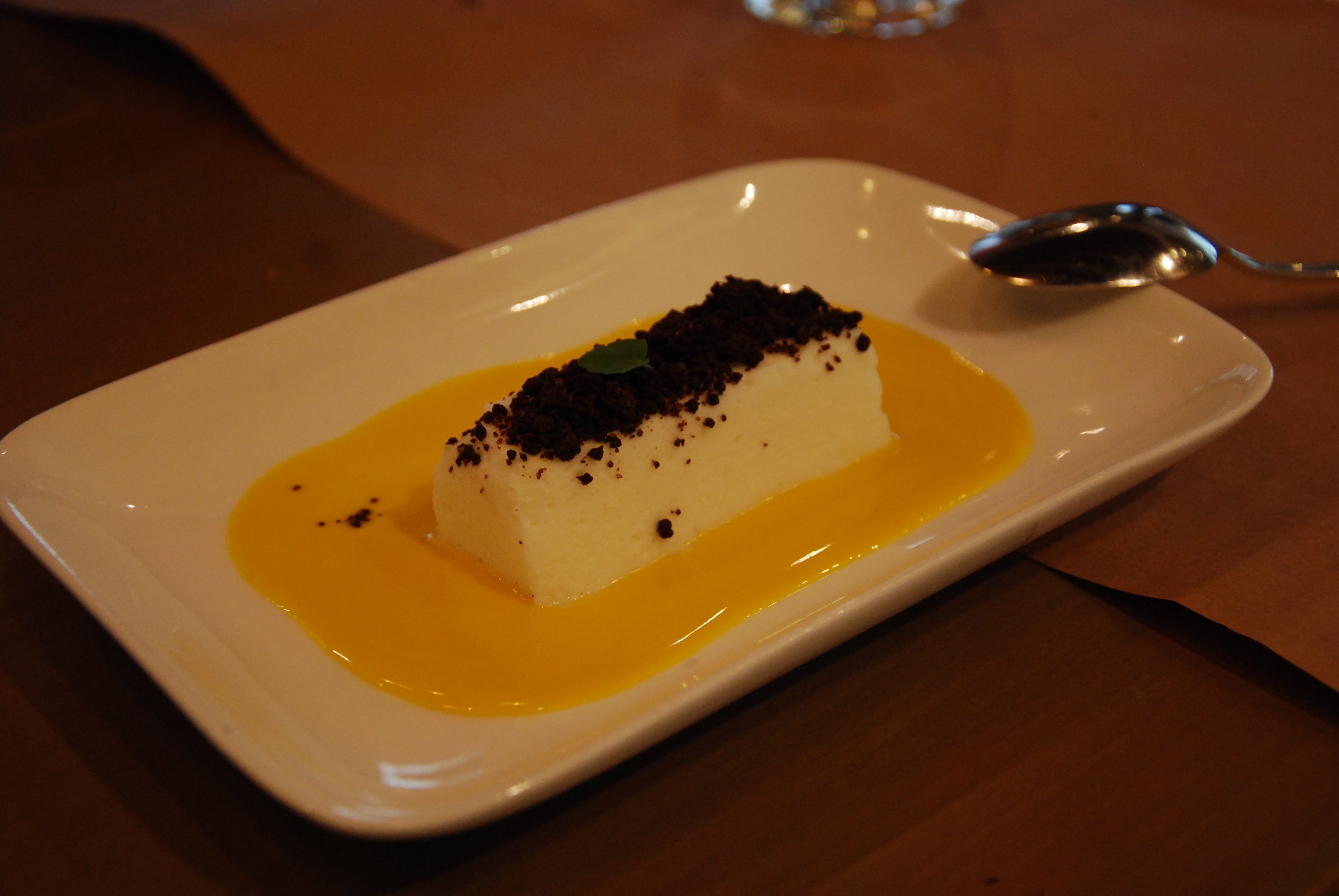 What makes Chef Martin exceptional is that he has also made a name for himself as an extraordinary pastry chef, and it certainly shows from the amazingly executed coconut & ginger mousse with mango cream and cocoa soil. Coconut and ginger might sound like an odd pairing at first thought, but tasting this will make you reconsider all your preconceived notions about perfect dessert ingredient combinations. The mousse has an incredibly rich coconut flavour, which is then caught up by a subtle taste of ginger while the mango cream brings a little zing to it.

We think the decision to hire Chef Martin is well worth applauding. Every new item on the menu was amazingly executed from appearance to texture to flavour. His desserts were a delight too, and we can’t wait to come back to taste his other sweet creations. 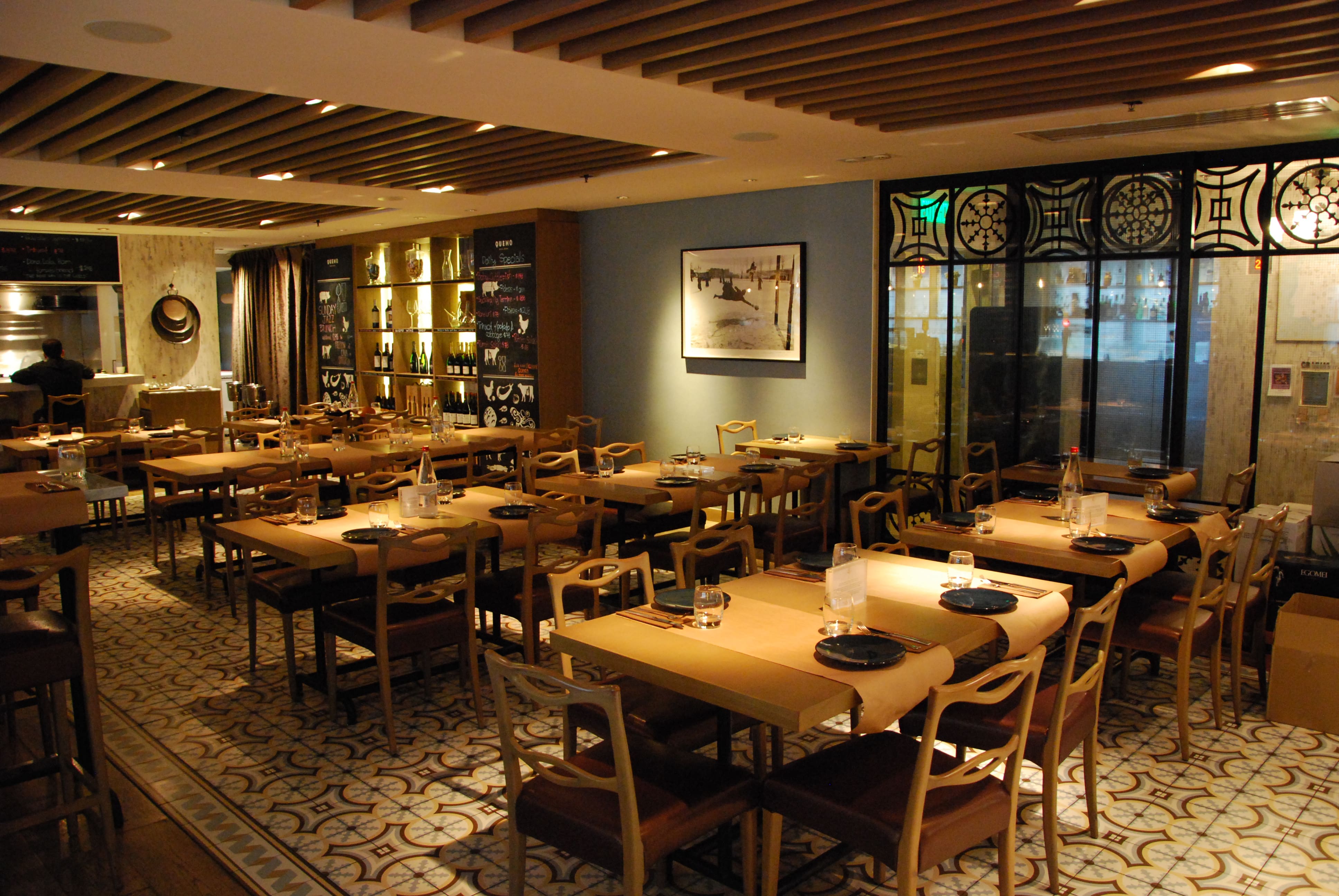