Malcolm Wood and Xuan Mu of Maximal Concepts lay out what it took to actualise their new passion-project Chinese restaurant, John Anthony 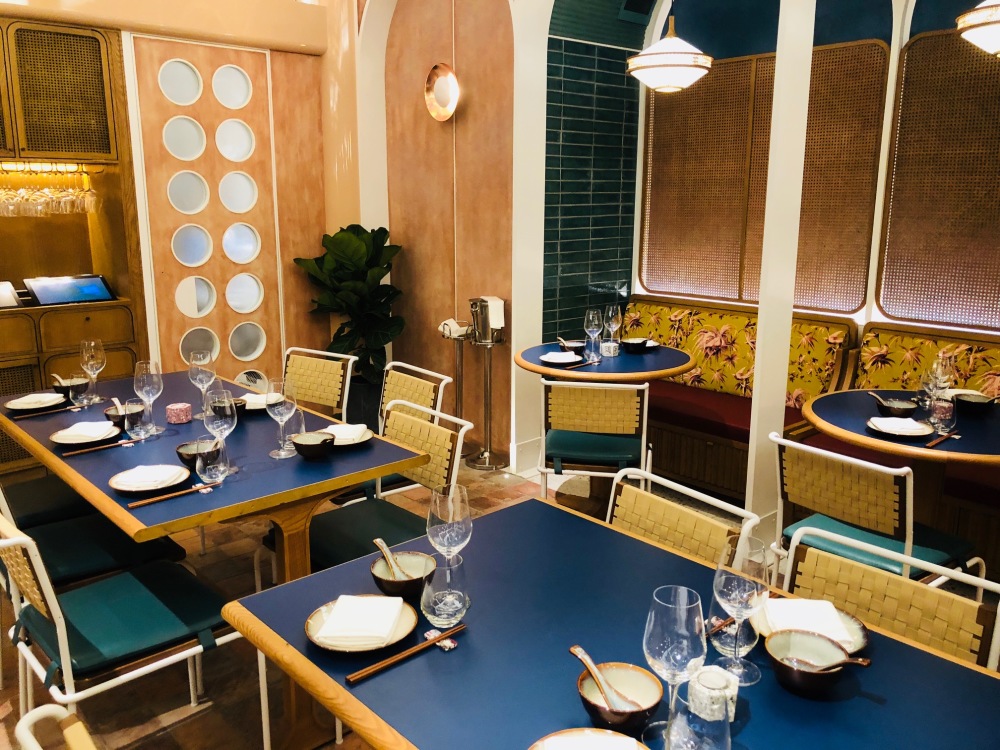 This is very likely the first-ever sustainably built Chinese restaurant in the world.

New restaurant John Anthony is a passion project with a foundation built on pure heart, and the people behind it want you to appreciate what it took to make it happen and, at the same time, are hoping to inspire change within the industry.

What does it take to build a sustainable restaurant from the ground up?

Malcolm Wood and Xuan Mu can’t hide their excitement as they welcome guests into the newly unveiled depths of John Anthony. In similar fashion to Mott 32, it is quite the subterranean reveal as diners travel down three sets of stairs before hitting the unexpectedly bright interiors of the basement of Lee Garden Three, which opens out into a cavernous enclave of sweeping statement decor. It’s a diverting feast for the eyes, with wall murals of ships and tigers and eye-catching tiles, lighting and furnishings, and every inch is covered in contrasting textures, fabrics, metals and woods. What’s more, it’s all been thoughtfully sourced. 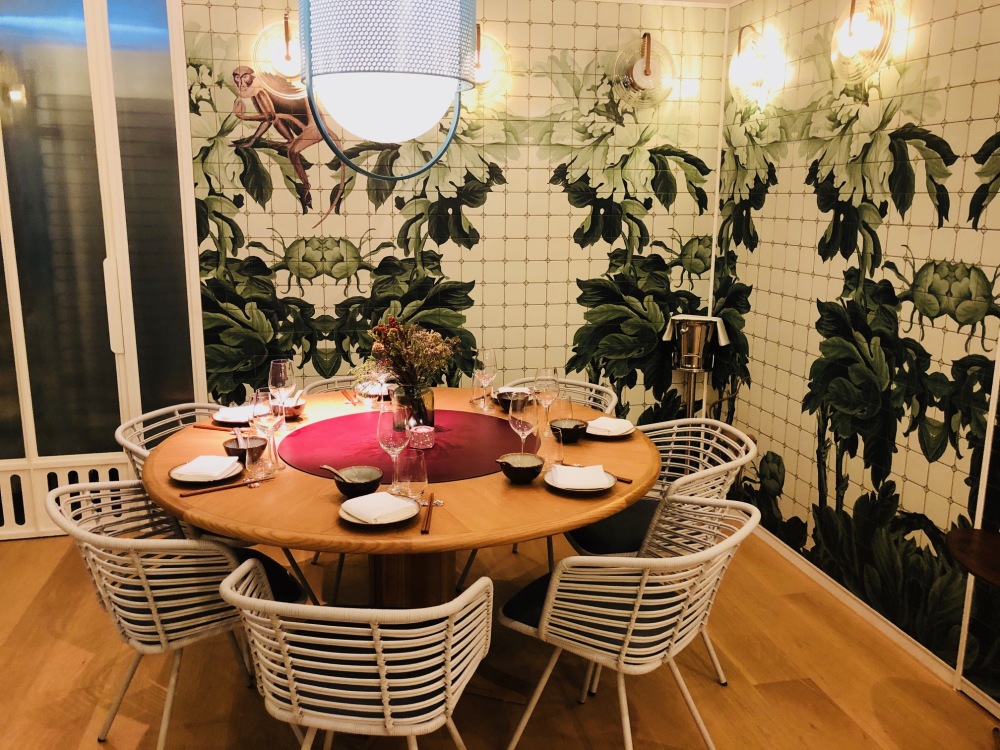 The floors, Wood reveals earnestly, are reclaimed terracotta tiles from Shanghai; the non-toxic lacquer paints are made on Lantau Island and are biologically friendly; they’ve used natural indigo dyes throughout; the chopsticks holders are crafted from upcycled plastic; the recycled paper menus and coasters are hand-pulped in their own offices. The staff wear recycled clothing and ethical footwear; the lighting is energy saving; the bar is zero waste; the tea and coffee are sustainable; the rice is from a traditional, sustainable farm; all the ingredients are carefully sourced – even the seafood. 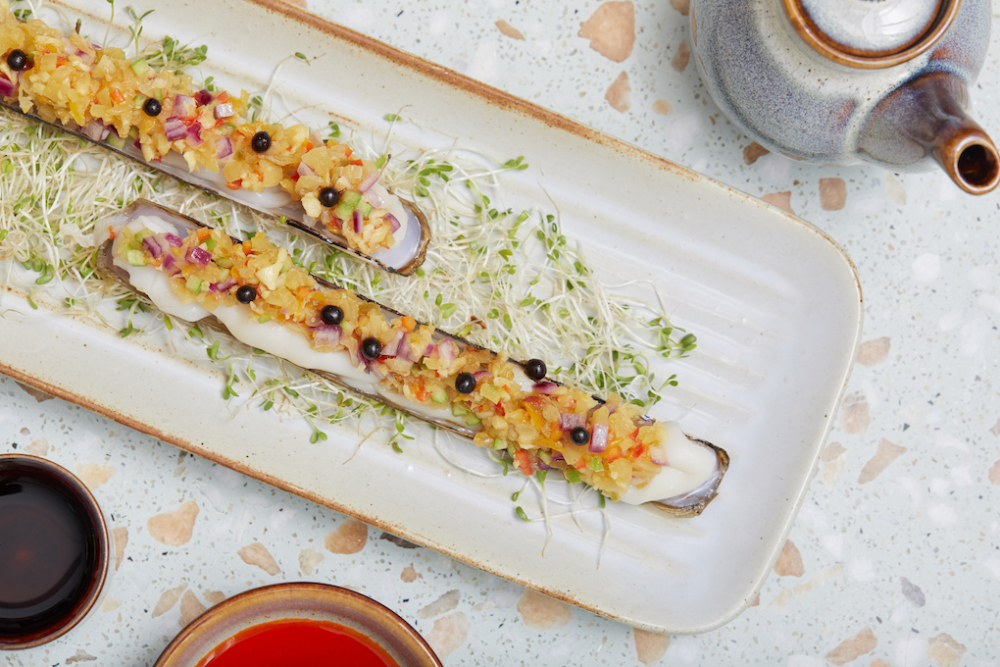 Wood explains, “You’re in a Chinese restaurant, and everyone wants you to have grouper – everyone wants you to have all these different seafoods on your menu – and it’s extremely hard to be a sustainable restaurant when you’re serving those things. A lot of people want to have leopard grouper. It comes from the Philippines, it’s highly endangered, it’s from the open ocean and it’s not the best fish to be eating. So all our grouper is giant pond-grown grouper. It’s not from the ocean. It’s from the only aquaponic farm in Hong Kong, and it’s an amazing product that grows really quickly and has a quick gestation period to the size that you can eat the fish within six months.

What we’re trying to do in this restaurant is educate the consumer that there are other options – sustainable options that might not be what they’re used to, but we hope the way we cook it and the level of our cuisine help people to look at the creativity of the dish and that it might be just as good.” 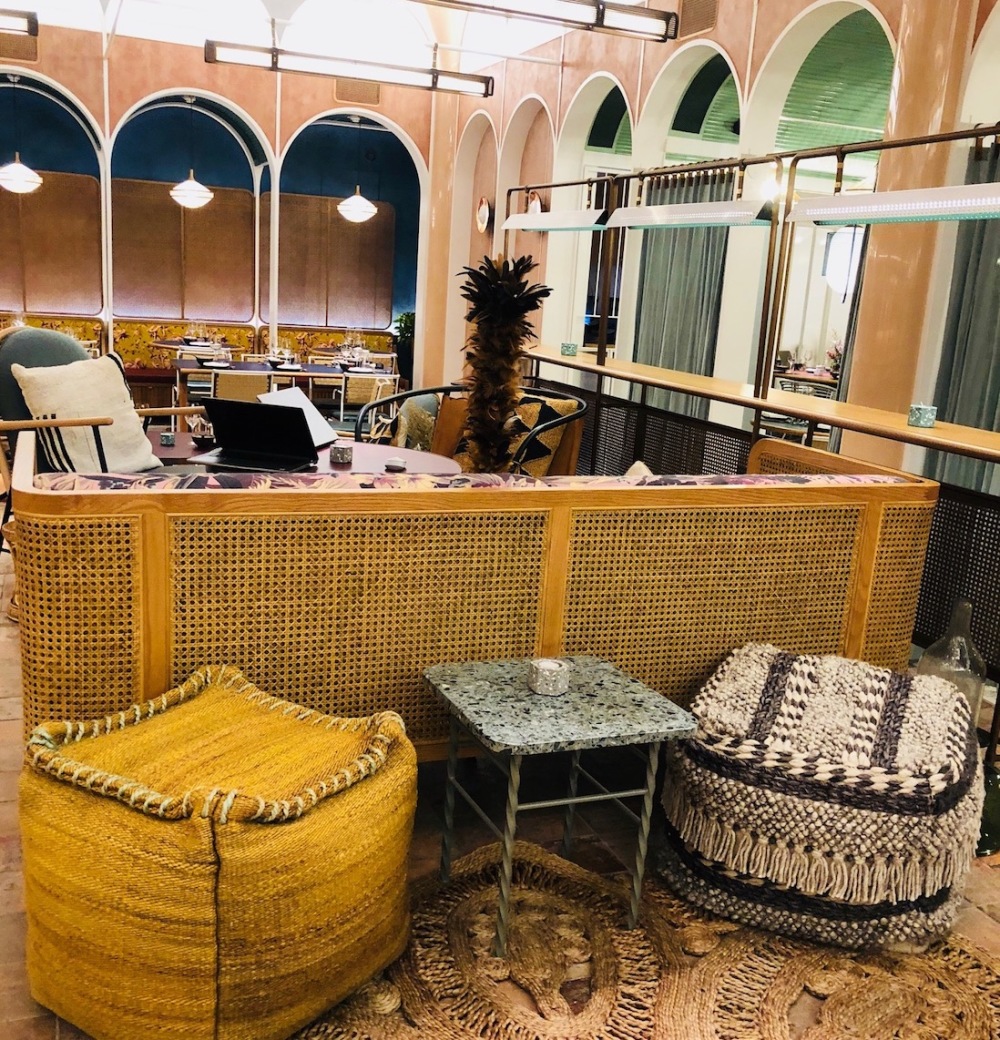 Wood continues, “We visited an amazing aquaponic abalone farm in South Africa where they’re growing everything out of the ocean, but it’s the same process as it would be in its natural environment. They’re taking sea water and filtering the plastics out – which is a big problem with fish right now – and they can grow an abalone in three years to something you can put on your plate. It stops poaching, it stops environmental damage from fishing and it’s just the best. We basically tried to do something very, very differently to what we normally do, or what people in Hong Kong have done before, in terms of the approach to building restaurants. The main thing was sustainability. We tried to change the way in which we approach the menu even more, the Chinese food, the design aspects, everything. I don’t think anyone has ever tried to do this in Hong Kong – and it costs. It costs with time, research and money to do the restaurant on this scale. It took us twice as long to design it, twice as long to source it and almost 30 per cent more overall cost.

Another major thing is we’re only buying our seafood from highly regulated seafood markets like Australia and New Zealand and avoiding the South China Sea and Thailand and places like that. That’s definitely the first step that every restaurant should be trying to switch over to in terms of how they’re sourcing their products. It has been an evolution; when we started eight years ago, no one really cared, nobody was talking about it and it wasn’t at the forefront of everybody’s minds. It was only about three years ago people started talking about how bad plastic is, and with plastic, we were quick to react and lead by example. John Anthony has been the moment that we’ve put everything we’ve learned together into a new restaurant – let’s source all our ingredients ethically, let’s reduce plastic, let’s go to a new level of thoughtful design — and we’ve put everything together into one package.” 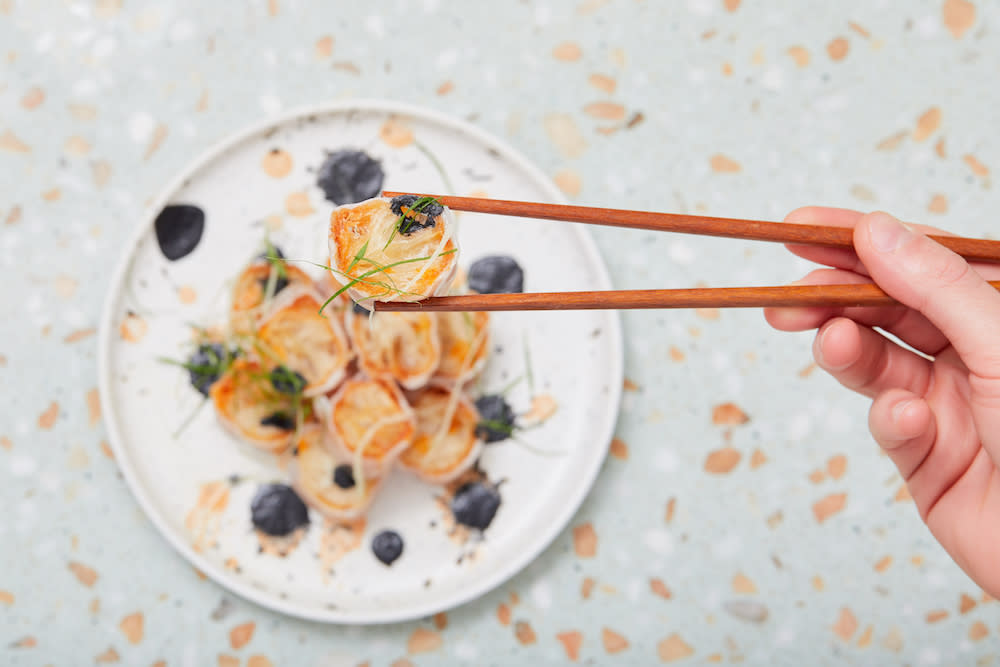 The food at John Anthony includes Cantonese favourites such as charcoal-grilled meats and handmade dim sum, as well as different regional dishes from provinces including Sichuan, Hunan and Shandong.

Wood says, “The concept isn’t only about sustainability; it’s also got a fascinating backstory from a historic Hong Kong spice merchant that is woven into the overall theme. The food is inspired by the spice trail and the journey of spice trader John Anthony, who was the first Chinese person to be nationalised by England. This restaurant is a tribute to him and includes dishes from his journey. He picked up spices like turmeric, which you don’t often see in Chinese food but was definitely being experimented with back in the day. So we’ve got some turmeric in the dishes; we’ve got some Northern flavours. We discovered the tandoori oven was used both in India and the mountainous regions of Western China. So we have slow-cooked tandoori lamb shoulder on a massive sword and twisted over the charcoal. All our char siu is cooked on charcoal grills.

Saito [Executive Chef Saito Chu] is an amazing chef, and it was interesting trying to get this menu out with traditional dishes but make the dishes more exciting and not veer off being traditional, because that’s what people respect. We knew that we wanted to do Cantonese food and there was a demand for it, and it is something that we got right with Mott 32. Now, we really wanted to go into the concept – the history of the food, the origins, the techniques people used to cook with – and see if we could make the product better than it already was. We’ve got three custom-built barbecues in the kitchen: one to do the goose dish, one to do the lamb dish and one to do the char siu dishes. We also have the second-largest gin collection in Asia – we’ll have about 450 in total, with many rare gins. We’ve come up with our own infusions, and we have gin tubes with our homemade infusions. It will also be open for late-night dining, with last orders at 11:45pm, closing around 1am, which is very late in this area.” 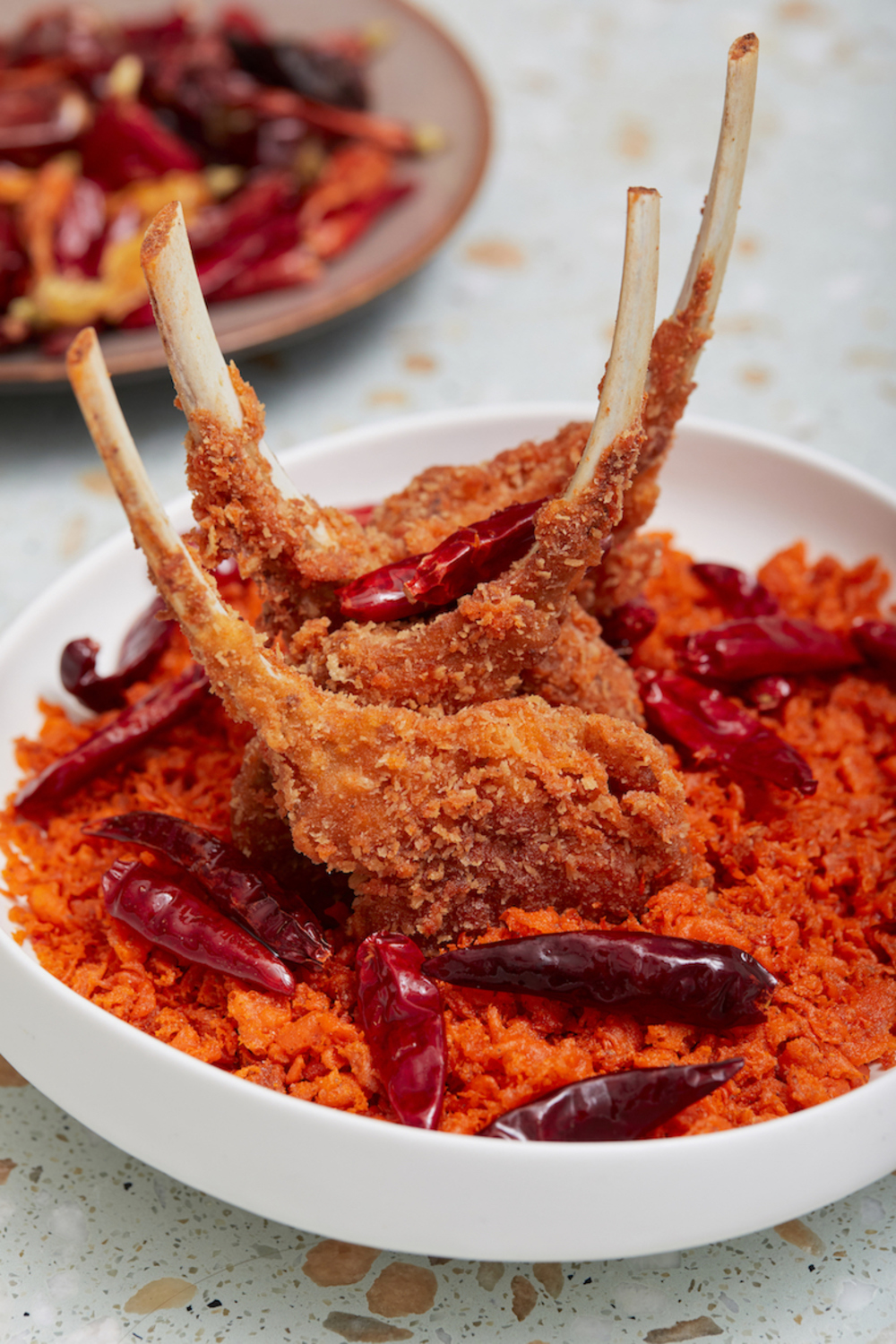 What are Wood and Mu’s hopes and dreams for John Anthony? “We want it to be a showcase. As a Hong Kong restaurant group, we’re doing something innovative – something different that’s pushing the boundaries – and we’re trying to encapsulate everything we’ve learned into this one restaurant. I think, going forward, this will be the way that we set the benchmark. I hope through the stories that we’ve discovered and the little farms that we’ve found and the things that we’re trying to talk about that we can start to educate people on this.”

And how do they sum up the vibe of the design in their own words? Wood says, “I reckon it’s probably the first Wes Anderson-esque Chinese restaurant, with a cool, Cantonese vibe. It’s the food Xuan and I like to eat, all on the same menu. It’s not your usual mix, but it’s one that works really well.” Mu’s description is more succinct, describing John Anthony as “the young, wild sister of Mott 32”. 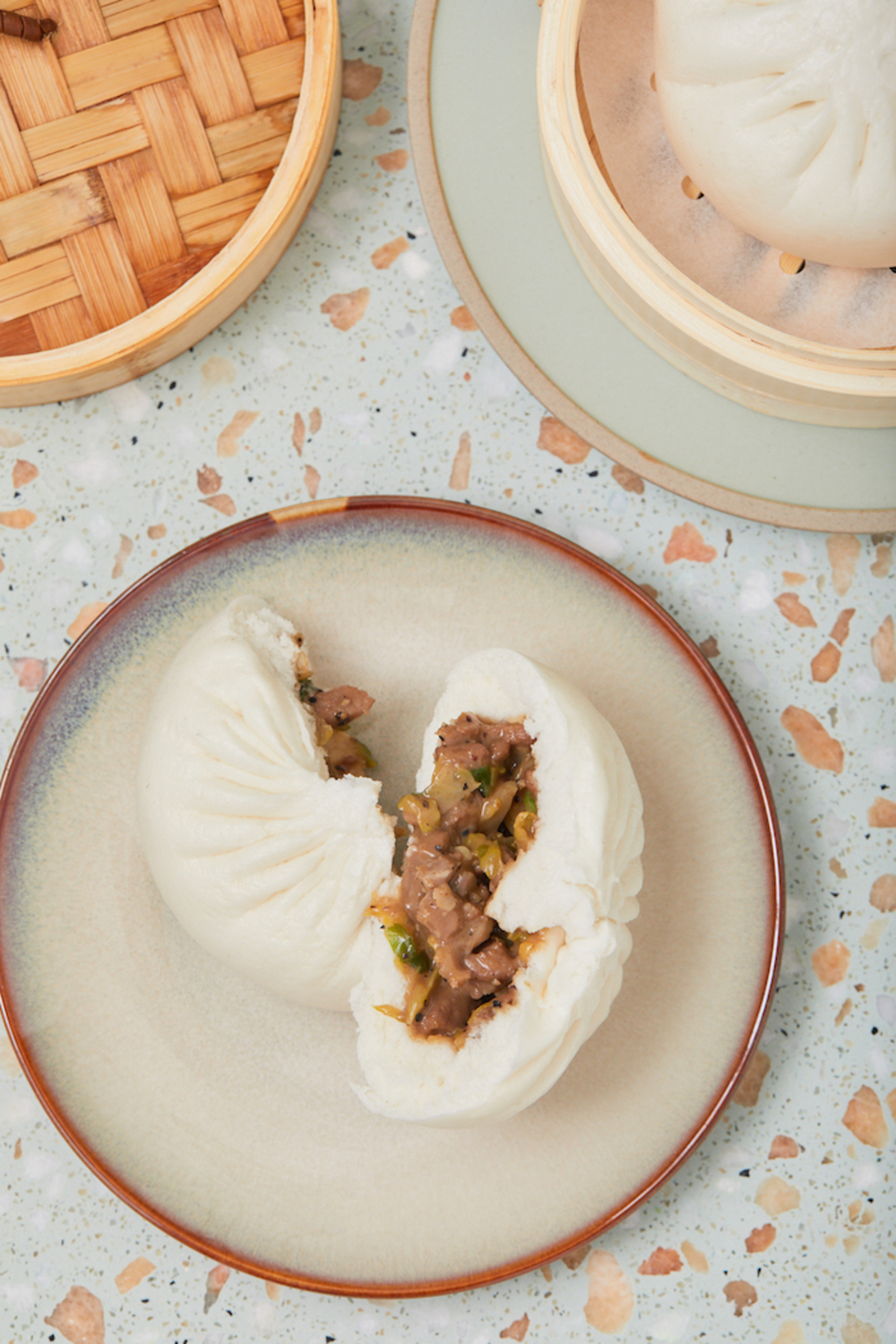 Maximal Concepts also own the third-floor restaurant space in Lee Garden Three, where they have plans for a fresh pasta and pizza restaurant. In the meantime, in addition to serving up dinner, John Anthony offers full lunch and dim sum menus and is open late.

The Michelin chef discusses his 15 year career while getting candid about his first RSRV menu.