Tips from a Pro

Continued article from our Foodie feature: Dried and True

One thing we found out after talking to the mums is, their knowledge of dried food although extensive, usually doesn't go beyond their kitchens and budgets. We tried to talk to a few stores on Sheung Wan's tried food street, but insider knowledge of dried foodstuffs seems to be a closely guarded secret, only imparted to loyal, paying customers. Through an introduction from one of the mums, we spoke to the friendly owner of Tak Hing Hong at North Point.

Jacky Cheung's dried food store has been in business in the neighbourhood for over 18 years. His store is shabby, tiny and inconspicuously hidden under a bridge - not what you'd expect of a shop that is stocked with hundreds of thousands worth of dried seafood. He says, regular customers in the neighbourhood are keeping business alive. Tak Hing Hong sells a variety of dried foods. Jacky says it's quite important to stock up a bit of everything in the store as customers tend to one-stop-shop - to make a soup, for example, it would require some capoy, several types of dried plants and perhaps some dried mushrooms. 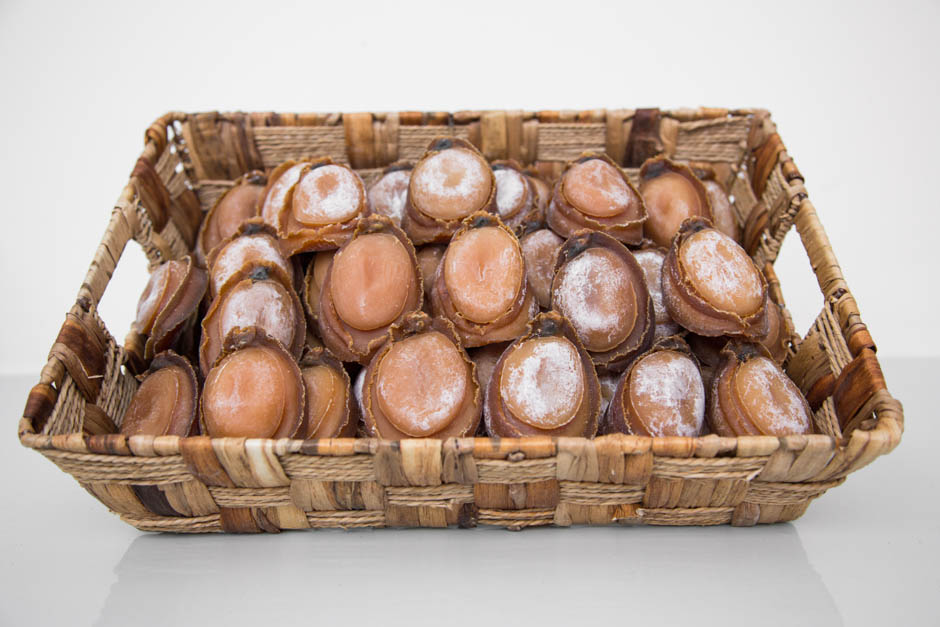 Although Jacky seems to know everything in his store, his speciality is dried seafood. "The best dried seafood nearly all comes from Japan. Geographically, they have one of the best seas in the world for shellfish, sea cucumber, or other seabed dwellers. The Japanese also have their secret recipe for processing seafood, which is why it has such a unique flavour." Jacky points out that all top tiered abalones are from Japan. Amidori is the most expensive, followed by Oma and Yoshihama. Amidori is sometimes referred to as the 'King of Abalone', and can easily fetch over $20, 000 per catty. "Colour and fragrance are keys to picking a good abalone - they should have a unique aroma and a rich, whisky-like colour. They should also appear clear under light." Because the ingredient is so expensive and difficult to prepare and cook, many stores offer to cook them for customers to guarantee they're going to have a tasty dish.

How to choose good fish maw?

Choosing fish maws is relatively easy, but fish maw harvested from a male fish is much more expensive than its female counter part. "A male-fish maw is more al dente and can therefore be used in cooking up a dish. A female-fish maw, on the other hand, melts quite easily when heated, so it's better to use it in soups." Whatever the price is, the nutritional value of fish maws is pretty much the same. "The difference is solely in taste and texture," says Jacky. And it's the same case with sea cucumbers. Again, the best ones come from Japan, which have nearly quadrupled in price after the earthquake. "North-eastern China used to export some of the best kinds of spiky sea cucumbers, but these days you need to be very careful with dried Chinese sea cucumbers - a lot of them are fakes and could turn into a black slush upon soaking."

The sales of shark's fin are dropping, according to Jacky, and he personally does not agree with the way industry is hunting sharks. "It used to be more ethical - fishermen would catch sharks and use every part of the fish, from bones and meat to fat, and of course the fins." Some of his customers are restaurant buyers and nearly all of them have stopped stocking up on shark's fin.

As we were about to leave, Jacky stuffed a few pieces of conpoy in our hands and smirked, "something for the road". Apparently, conpoy is cooked, processed and ready to eat when they're shipped out of the food processing factories. As a kid, Jacky used to steal a few pieces from his mom's storage cupboard every now and then and eat them as snacks - probably the reason why this particular piece of insider knowledge is missing from the mums' memories...