Having lived in Singapore for five years, I now have an unquenchable appetite for hawker food. There are a number of restaurants supposedly serving my favourite char kway teow, but I find they always come up a bit short. After all, a char kway teow without Chinese sausage, cockles or lard is basically just fried noodles. In my hunt for the best hawker food in Hong Kong, I think I’ve asked every Singaporean, Malaysian or person who has lived in Southeast Asia to share their secrets. Where do they go when they crave a taste of home? I thought there would be a few hidden gems, but only one restaurant kept coming up: Café Malacca.

Housed in Hotel Jen, this Malaysian restaurant has been around for a few years. Like most Southeast Asians, they take their food extremely seriously. Mrs Poon, the culinary director, has trained up her kitchen staff to become experts in the art of hawker cooking. The chefs each specialise in a few dishes and conduct extensive market research (taste-tests) in Malaysia to make certain that what they cook is as authentic as possible. Considerable effort is made to ensure that even the sauces are made from scratch with the right ingredients. Just thinking about their balachan and sambal sauces is making my mouth water all over again.

While there is some experimentation in hawker food (hello, salted-egg carrot cake), much of it is classic. Foodies don’t want their favourite dishes changed. For this reason, Café Malacca has built up a loyal clientele without needing to constantly update its menu. However, they continue to introduce new dishes, one or two at a time, to the Hong Kong market.

Recently, we had the opportunity to try some of their bestselling dishes, both old and new. 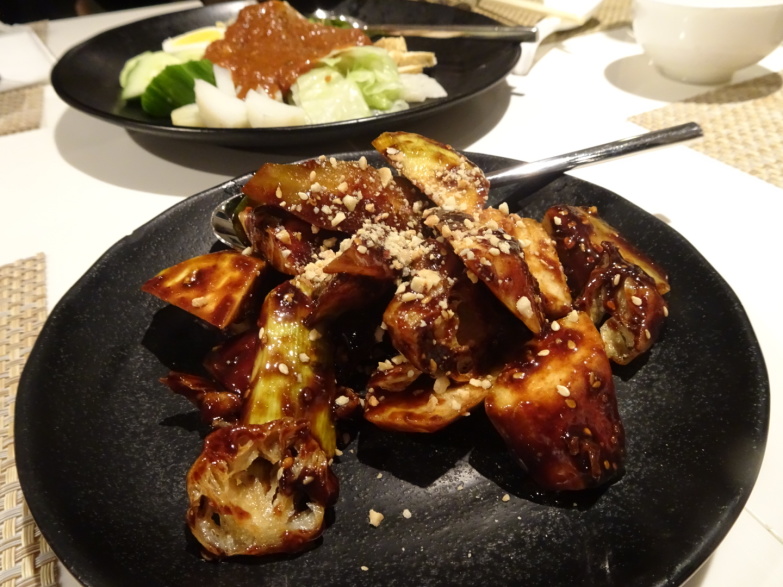 These grilled skewers may be small in size, but they were big in flavour. We tried both the beef and chicken. Both were good, though we found the chicken especially tender. A couple of these smothered in the accompanying spicy peanut sauce was a great way to start our meal.

Rojak is a mixed fruit salad with a distinctive dark colour and sweet taste. The blackish sauce includes hoisin sauce, prawn paste and balachan chilli. Mixed up with pieces of guava, starfruit, pineapple, cucumber and fried crullers, it was full flavoured yet fresh. 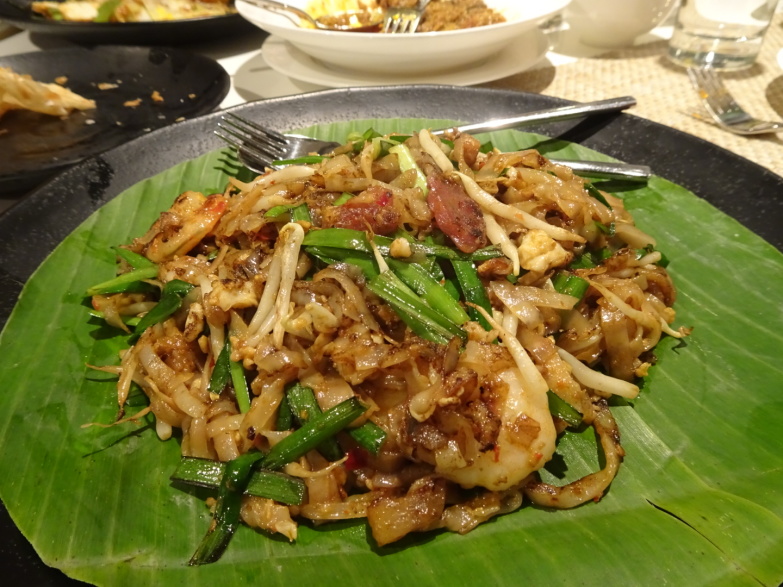 Ah, my favourite hawker food. Café Malacca’s char kway teow is, hands down, the most authentic version I’ve found in Hong Kong. It has the key ingredients of charred rice noodles, fatty Chinese sausage and crunchy bean sprouts. The kitchen team were happy to meet our request to add fried lard bits to the mixture, which gave it an extra dimension of flavour and texture. Next time, we’ll see if they can add some chilli sauce too.

These fried cubes of homemade carrot (well, radish) cake were perfection. We loved the soft yet crispy texture and the wok hei flavour. We felt this one had a bit more spice than the char kway teow and may be our new favourite hawker dish in Hong Kong. 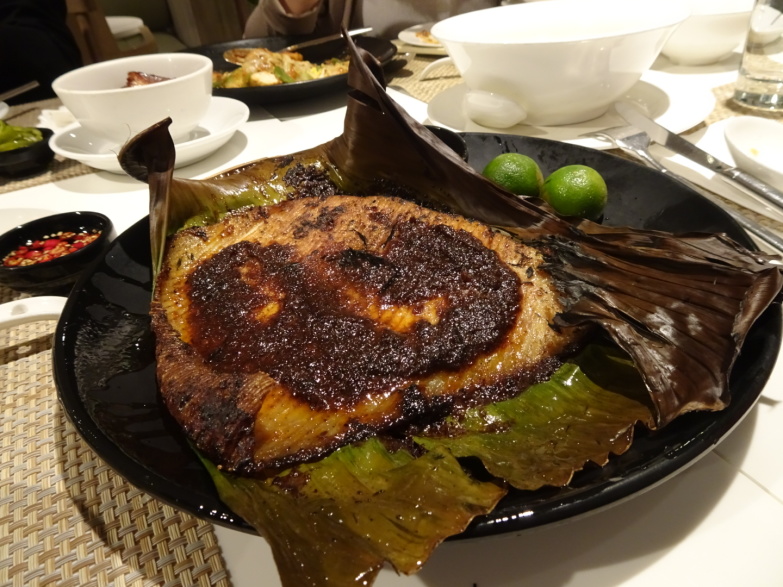 Café Malacca’s version uses shin beef, which has a pleasing amount of fat. The meat was tender and extremely fragrant, having been marinated with lemongrass, coconut and various spices. To be extra sinful, we ate this saucy dish with crispy roti instead of steamed rice.

Our large stingray was from New Zealand. It was flame-grilled, smothered with the smooth sweetness of sambal chilli sauce and further enhanced with a squeeze of calamansi. We haven’t seen this dish on the menu of any other Southeast Asian restaurant in Hong Kong and were glad to satisfy our craving here. 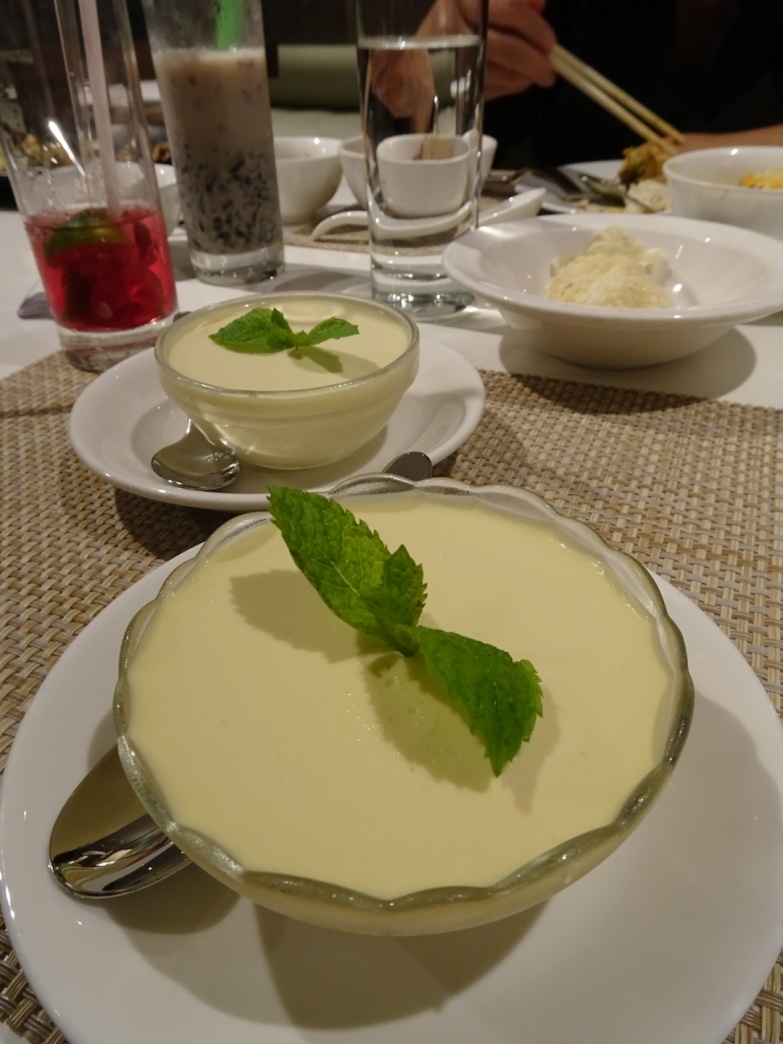 This infamous smelly fruit is quite polarising. Those who enjoy it will be happy to find two options on the menu. One is made with D24-grade durian, a high-quality durian with a smooth yet pungent taste. The other is made with Mao Shan Wang durian, known as the “king” of durian; its mild flavour and creamy texture make it highly sought after. As a durian fan, I think both are delicious, but the Mao Shan Wang version is a distinctively milder choice for those who are trying it for the first time.

Every country has its own iconic icy dessert, and ice kachang is Malaysia’s. A mixture of beans, corn and palm seeds are covered with a mound of ice and homemade sarsaparilla syrup. It may be surprisingly savoury to those who are used to Western-style desserts, but for us, it’s the ideal frozen sweet.

We agree that Café Malacca serves up some of the most authentic Singaporean and Malaysian food in Hong Kong. While there are other restaurants in this category, we truly feel that none of them offer the same quality. The variety of authentic spices and sauces used is what makes it stand out from the pack.

For those who already love Café Malacca, you’ll be glad to know there are a few new things on the menu. During our visit, the special was bee thai bak, a traditional pointy rice noodle served in soup. We also hear they are planning a Southeast Asian–inspired afternoon tea set – we have our fingers tightly crossed that it will include some rainbow kueh lapis and pandan cake.