We’re going to give you a little look at some of the restaurants and bars that are coming out on top of the voting stakes so far in the 2018 Foodie Forks awards.

There are about a billion places that haven’t received even one vote yet, and because of that, we are rallying for your five minutes to pop their names onto this easy voting form so that they can earn a well-deserved gong for their efforts in making your taste buds happy this past year. Have a look at what was doing well at this time last year by clicking here.

The last day of voting is Monday, 16 April, so if the places you love haven’t yet been nominated, get voting!

Beet is really stealing a lot of your votes – and for good reasons in our books. Their spot-on service, romantic, vibey location and locally sourced cuisine were a culinary highlight for us this past year. We’ve also had a lot of votes for another of our top choices, New Punjab Club; if you can get yourself a reservation there, we can’t imagine you’ll be disappointed. There’s been a surge of votes for Elementary, the new Tai Hang offering from Catch and Mama Malouf’s Alex Malouf, and Dear Lilly, the first full-menu joint from The Iron Fairies and Ophelia designer Ashley Sutton. Also putting on a good show are MEATS, Gough’s on Gough, Alvy’s, El Cerdo, Pici (Central), Haku, Nikushou, Brass Spoon (Central), FRANCIS, Hexa, Big Sur and Umi.

We got a bunch of votes for Frantzén’s Kitchen, which is definitely divine, but this Nordic eatery won this category last year, so it’s no longer new. And then we got a vote for “nothing”. Quite mean, really – we feel hurt on behalf of all Hong Kong’s new restaurants.

Where do you go when you know you’ve got to impress? This year, our readers have seemed to remain true to the classics, which is a testament to those continually bringing it to the table each night. Tate Dining Room & Bar, Ta Vie, Beefbar, Bungalow, Mott 32, Yardbird, Ronin, Neighborhood, Amber, Petrus, Caprice, Zuma, BELON, 8½ Otto e Mezzo Bombana, TokyoLima, Carbone, SEVVA, Porterhouse, La Paloma, Lung Kin Heen, ON Dining, Haku, The American Club’s McKay’s and VEA Restaurant & Lounge are all at the top of our readers’ lists for the place you know is going to bring it each and every time.

It’s all about the hidden little hotspots this year. We’ve got lots of votes for reservations-only, enter-through-a-phone-booth PDT (Please Don’t Tell) at the Mandarin Oriental, the psychic-shop-entranced Employees Only, funky COA, the charming The Old Man (we also had a vote for The Old Gentleman, which could be a hint at a more well-mannered version of this new fave, but we’ll accept it as a vote either way) and the whisky, pizza and craft beer joint Alvy’s in Kennedy Town.

And then we’ve had loads of votes for some of our reliable faves like Rummin’ Tings, VEA, Stockton and Quinary, which we agree are all top notch-bars but also a bit too long in the tooth to be celebrated in this category.

Chef of the Year

And finally just one vote for good, ol‘ Ricky Honey Baby. Not a real person, but someone’s a real comedian.

Yardbird, unsurprisingly, is high up on this list. A favourite right out of the starting gate back in 2012 (and Best New Restaurant winner in the Foodie Forks that year), they’ve maintained their high standing in people’s hearts and are constantly busy despite moving to a much bigger space down on Wing Lok Street. Limewood at The Pulse is also evidently where you like to spend your time chillin‘ out. There have been a bunch of votes for Pici, which we noted was queued up constantly at the recent Taste of Hong Kong festival, and there have been some votes trickling in for Samsen, Giando, AMAZAKE, Beefbar, Cô Thành, 208 Duecento Otto, Le Bistro Winebeast, TENKAI, Mandarin Grill + Bar, Moon Thai, The Optimist, Sushi Kuu, Mrs Pound, BÊP, Aladin Mess, Babbo Trattoria, open kitchen, La Paloma, Jinjuu, ON Dining, Caprice, Zuma, Brickhouse, Motorino, M&C Duck, Kashiwaya, Gaia, Haku, Ho Lee Fook, La Vache!, Plaza Mayor, La Cantoche, Gaylord, Jamie’s Italian, Happy Paradise, Carbone, Mama Malouf, Catch, Uma Nota, Butao Ramen and Pang’s Kitchen. People are also loving the ampersand-conjuncted, with several votes each for Beef & Liberty, Mr & Mrs Fox, Lily & Bloom, Ham & Sherry, Bread & Beast and Butcher & Baker.

Then there was the “we call it ‘white staircase‘ but think it’s called Joy Luck Cuisine on Prat Ave” vote, which we think may refer to Joy Cuisine on Hart Ave in TST. Either way, we want to hunt down this obscurity that’s clearly made a mark on someone’s taste buds – and frequently.

What flew onto the scene this year that made you think, I like what they’re doing there? So far, the California cool of Big Sur, with its tasty barbecued eats and juice and booze bar, is attracting your attention. Bakehouse, Gregoire Michaud’s long-awaited bakery in Wanchai, is also earning the votes, as is the study, a sweet little laid-back community café. FRANCIS, a new community wine bar and Middle Eastern restaurant run by three stalwarts of the industry, is earning your props. So is popular new bar COA and one of our favourite restaurants this year, Beet, which was formerly another fave of ours – Le Port Parfumé – and is still run by the same great peeps. The Old Man is loved in this category, as is Roomsbar, the unique gourmet café at the new Emperor Cinema in LKF. Dear Lilly, JUNON, Uwe, MEATS, WTF, Little Birdy, Feather & Bone, Gough’s on Gough, Elementary, Uma Nota, Duen Kee Chinese Restaurant, Zafran, Beirut Bar, Rustico, Wai Wai, Three Blind Mice, Alibi and Flamingo Bloom are also doing well here and the very cool ACT Africa Coffee & Tea in Wong Chuk Hang. We had a vote for ATLAS in Singapore, which we only wish would appear in Hong Kong.

Then there was the vote for “affordable, good food”, which although not a place, really rings all the right bells in our mind and was clearly trying to make a statement. We are picking up what you’re putting down, voter. And we had a vote for “Dunno”, which we briefly thought was some new place so underground that we hadn’t even heard of it yet. It isn’t.

We feign shock but are mostly unsurprised when Starbucks, Pret A Manger and McCafé always manage to get a few votes in this category. But then we are revived when we see that most everyone else has chosen a favourite independent café, although they are all different ones. Similar to last year, they run the gamut of the city and will ensure a tight race for the winner. The ones pulling out ahead are: Why 50, The Coffee Academïcs, The Cupping Room, Elephant Grounds, Winstons Coffee, Detour Coffee Roasters, Classified, Bakehouse, % Arabica, Kaffeine, Omotesando Koffee, Brew Note Coffee Roaster, Artisan Room, NOC Coffee Co, Fineprint, Coco Espresso, Amber Coffee Brewery, 18 Grams, sensory ZERO, Corner Kitchen Cafe, La Station, NINETYs, Brew Bros, Mansons Lot, Hazel & Hershey, Motu Kiwi, Nutsy Coffee Bar, Filters Lane, Roasters Alchemy, HABITŪ, Cafe Deadend and Ah Meow Cat Cafe.

And someone put down 7-Eleven.

Who do you know that should be awarded for the good they do along with the food they create? Be it small or big, if a restaurant has made the decision to do away with straws, make their own sparkling water, go completely zero waste, sustainably source everything or help to feed those in need – in short, if they are making a committed impact and it has impressed you – give them your vote. We love that votes always roll in for Posto Pubblico, as they’ve been making strong ethical decisions since they began their restaurant, with efforts like their in-house compost machine. The first zero waste resto in HK, MANA!, always does well in this category, as does another stalwart for responsibly sourced, fine vegetarian cuisine, Grassroots Pantry. Other vote getters include Feather & Bone, Fish & Meat, La Cabane, Kale, Yum Cha, Brickhouse, Tulsi & Wine, Haku, Rhoda, Locofama, Beef & Liberty, El Cerdo, Bombay Dreams, Mavericks, Green Common and Youni.

And someone voted specifically for the spaghetti at ON Dining – more investigation is needed on that one.

Last year, we uncovered plenty of hidden gems thanks to all the readers who generously nominated their faves, but this year, it seems you are more reluctant to share your toys. We’re getting a lot more blanks on this one, so we implore you to help out these spots by giving them some recognition (couldn’t hurt to help to keep them in business too!). The good-hearted votes we’ve had so far include A Side/B Side, La Cantoche, Gaylord, Wai Wai, Duen Kee Chinese Restaurant and Three Blind Mice (which is an absolute favourite of ours too).

Someone put down “Tsim Sha Tsui”, clearly feeling that this district as a whole has a lot to offer. We also got a few Lamma Island gems like the picturesque and hard-to-reach The Bay in Mo Tat Wan and atmospheric Spanish tapas spot Candela in Yung Shue Wan, better known as “Carlos‘ place”. Both are superb destination dining experiences – or, for those who live on Lamma, their local.

Those who are doing good in the world of food are our very favourites to celebrate. Again this year, for the third year running, is Ming Gor of North River (Pei Ho), who continues to distribute free rice boxes from his restaurant to those in need, and Peggy Chan for her change making in the world of vegetarian fine dining and zero waste. Foodie’s own zero waste diarist, Hannah Chung, is getting a good chunk of votes, which fills us with warm fuzzies, Takashi Saito from Sushi Saito certainly has fans, Matt Abergel of Yardbird is garnering plenty of votes, people are missing HOME – Eat to Live‘s Christian Mongendre, others are loving Little Bao’s inspiring May Chow, while some feel Caprice’s Guillaume Galliot is their knight in shining chef whites. We‘ve had a lot of votes for veggie eatery MANA!, with one voter saying, “MANA! always inspires me” – us, too! We also like our readers’ ubiquitous altruistic nominations: “For me, every chef and diner alike is a food hero...” and, “Anyone actually making an effort to source locally.” We even got a vote for HK’s urban farmers as a whole. True dat, we say. Some voters have gone international and given votes to Marco Pierre White, Gaggan Anand, Paul Bocuse and Jamie Oliver. And we received one vote for gorgoeus Instagrammer @symmetrybreakfast, who twins all our morning desires. 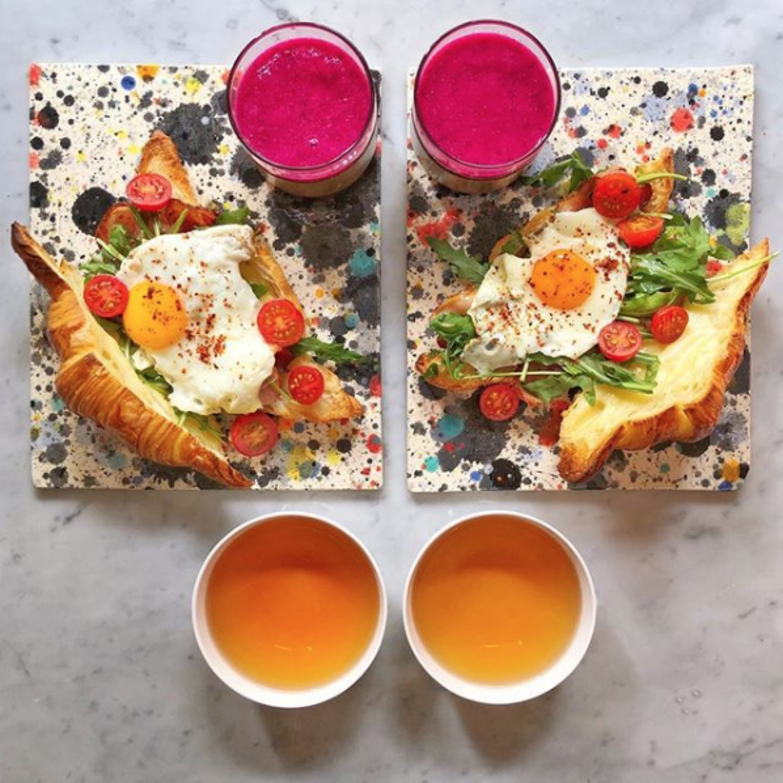 And this year just one person voted for “myself”. We hope they have their own cape and mask at home too.

Is your blood boiling that your favourites aren’t up there? Get your fingers tapping to make sure those who are working hard to fill your tum with wonderful chow get some recognition for it.

A year like no other to celebrate the heroes of F&B in Hong Kong, with Foodie’s 9th annual awards giving credi ... READ MORE